Home Mailbox Mourinho sympathy, calls for Lallana and more in the Mailbox 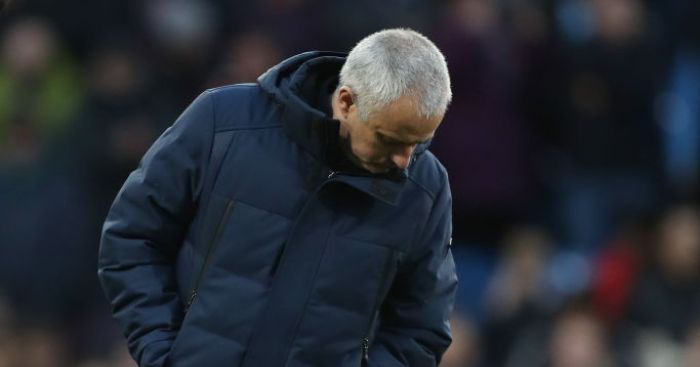 Send your thoughts and condolences to Jose Mourinho to theeditor@football365.com

Sympathy for the devil
When Pochettino left Spurs I wrote into the mailbox lamenting that nothing good lasts for long – and the arrival of Mourinho was the exclamation mark to drive the point home.The last few matches have been miserable – Leipzig, Chelsea, Wolves, Norwich and Burnley have, at various times, made us look ordinary. Worse, they’ve made us boring. Whatever else Spurs have been over the years, boring rarely comes into it… And now even the repeated individual cockups are predictable and dull.

Look, maybe it’s Stockholm syndrome, but this isn’t a Mourinho team, not yet. It’s not even really a team, full stop. Lloris and Kane haven’t played in the same side under Mourinho due to injuries. Kane and Son may miss the rest of the season. Vertonghen has aged five years since last spring. Trippier wasn’t replaced. Sissoko is broken. Victor Wanyama left this week, having barely been able to play for three years. Dembele went a year ago and his replacement, Ndombele, hasn’t settled. Eriksen is gone in body, a year or more after leaving in spirit. Dele, Rose, Davies, Foyth, Lo Celso, Lucas, Dier, Lamela, Sessegnon… All have struggled for form or fitness.

It’s telling that our most consistent player this year has been Serge Aurier, a player who’s managed to find a few 7s to go along with his 6s and occasional 9s. No-one else has really managed to stay fit long enough to be considered.

Our squad is a mess. Problems that we could spot from the stands 2 years ago haven’t been addressed, including Kane’s injury-proneness and our heavy reliance on him and Son for goals. Steven Bergwijn and Gedson Fernandes seem like good moves as a start. But there’s a lot more work needed (two full backs, a centre back, a defensive midfielder…) and one summer probably won’t be enough to address it all, especially with Levy being Levy.

Mourinho could certainly bring back the charm he showed in the opening weeks (losing to ManU seemed to be the end of the honeymoon period). He could probably have acted sooner to go after Burnley tonight. But, again, we were missing 4 starters in Kane, Son, Davies and Sissoko – Davies picking up an injury just as Lloris returned is pretty typical of our 2020, really.

Are we worried about Spurs under Mourinho? Oh yes, we are, and I’d be surprised if he sees out 2020 in the post. Lose to Leipzig midweek and our season will tail off as it seems clear he’s already making plans for the summer, including a big clear out… But that in itself is somewhat hopeful, because that clear out should have taken place a year or even two years ago, and if all Mourinho achieves in-post is being the catalyst for the next cycle of regeneration before hanging over to Nagelsmann/Espirito Santo/Howe/Farke/the Cowley brothers/Pochettino then maybe that will be enough.

It’d be really nice if we could stop conceding stupid goals, though.
Michael C

Tears for fears
I said the other day that if we lost on Saturday I’d start to be worried. Somehow we have won and yet I am a bit nervous. We’ve literally lost all penetration. I watched us probing around their back 6 before someone attempted a really poor through ball and was left wondering what’s wrong. Nobody had any idea how to break down their defence. We were desperately looking for space in the wide areas but Bournemouth pressed hard in this area (a la Watford/Atlético) so we had no joy.

In the second half Firmino and Mané started to drop between the lines and come deep to cause a bit more confusion but that’s only going to help if we also have a central midfield not afraid to provide some forward movement. AOC has stopped providing this in recent games and I’m struggling to understand why. Keita is supposed to be box to box but isn’t quite right at the moment. Fabinho has been a bit average coming back from injury. Adrian seems nervous and comes for stuff he shouldn’t whilst not coming for stuff he should. I think he’s a good keeper but he’s not as predictable as Alisson which is harder to defend in front of.

So what do we do on Wednesday? Honestly I think a midfield of Milner, Lallana and Wijnaldum should be used, assuming Robertson is fit enough to play. It’ll give us some creativity through the centre when we’ll be facing a ridiculously well drilled low block that will be convinced after this past week that they can shut us out for 90 minutes. I fear that the same midfield as today won’t have the solutions we need.
Minty, LFC

Am I the only one who doesn’t think Fabinho should be in the Liverpool team vs Atletico on Wednesday if Henderson is fit? Fab has been wonderful for much of the season, but games have been passing him by since his return from injury. A common theme of our recent drop in form has been failure to win second balls which prevents us maintaining attacking pressure and gives us more opposition attacks to deal with. Fabinho’s dip in form seems to have been a big contributor to that.

Henderson on recent form can play the defensive part of the 6 role just as well and his long passing from deep is better. A three of Henderson breaking it up and spraying it forward, Gini weaving in between the lines and Ox bursting forward sounds more complete and varied than the Fab/Gini/Hendo three that seems to be the default for big games recently.

I’m sure Fabinho will get back to the monsterous form he showed earlier in the season sooner or later and, all going according to plan, there could be a few Prem games coming up without a huge amount riding on them for him to play his way back in. But Atletico is a huge game and I don’t think we can afford the Fabinho we saw vs Bournemouth in the team for it.
Tom

Read the article by Ian Watson.

Liverpool won. Not one bit of positive comment. Not one. Liverpool were not great today but what’s the point in putting them in the winners article if your author cannot say anything positive about them?

God knows what would have happened if Liverpool had lost? More panic than the government’s response to coronavirus!
Ade, Guildford, 7 is coming. Look forward to Simeone coming to town. Bet Ian Watson isn’t.

Lull
Liverpool have clearly been trying to lull Atletico into a false sense of security over the last few games and I confidently predict a 1-4 hammering from Bournemouth.
Aidan, Lfc (here’s hoping this makes me look like an idiot…okay, more of an idiot)

Having just watched the Liverpool-Bournemouth game, I feel compelled to write in to express my disbelief at the stupidity that led to both of Liverpool’s goals, and more broadly the tactical naivety on display in the Premier League this season.

It doesn’t take a rocket scientist to fathom that Liverpool like to press hard, and that a large percentage of their goals come as a direct result of winning the ball from said pressing. Yet week after week, teams with limited technical ability attempt to pass the ball around in their own half, inviting Liverpool to utilise their strongest asset.

I feel that the flood of money into the Premier League and the silly transfer obsession that grips the country every summer has detracted from what is clearly a severe lack of tactical acumen across the board in England.

Liverpool are one trick ponies who have used their solitary trick to build a 25 point lead at the top of the table. That’s a damning indictment on the managers of the other 19 clubs.

I fear that Atletico Madrid will only ram this point home further in midweek.

This is the remix to transition
As an Arsenal fan I hate ManYoo because of our rivalry in the past.

Both clubs have fallen into mid table obscurity and need to rebuild.

So many ManYoo glory fans want success immediately. I actually think Ole isn’t doing too bad. He needs support from the board.

Arsenal are recovering at a slower pace but I really like what Arteta is working at .

Arsenal and ManYoo glory fans need to back off !
Chris, Croydon

Watched my beloved Gunners be shockingly terrible and yet somehow manage a win vs West Ham yesterday, VAR correctly awarded the goal, so i guess that’s a good thing.

But after the ball went in we celebrated a bit, then groaned a bit as the flag went up (I still think Sian Massey-Ellis is one of the best flag wavers we have though, is football ready to see her in the middle? I am). Then VAR and the biggest celebration of the game came after three minutes of watching no football and waiting for a screen to change.

For the best league in the world (TM) and the world’s favorite sport this is simply not good enough. Tennis manages instant millimetre perfect computer projections, NFL deals with similar to offside related issues every down, almost instantly. Why does it feel like football has a bloke in a cardigan watching grainy TV images, but not until he’s done dipping his Hobnobs in a cup or tea and putting the cat out? We deserve better.