Home Mailbox Klopp is about to perform his biggest coaching miracle… 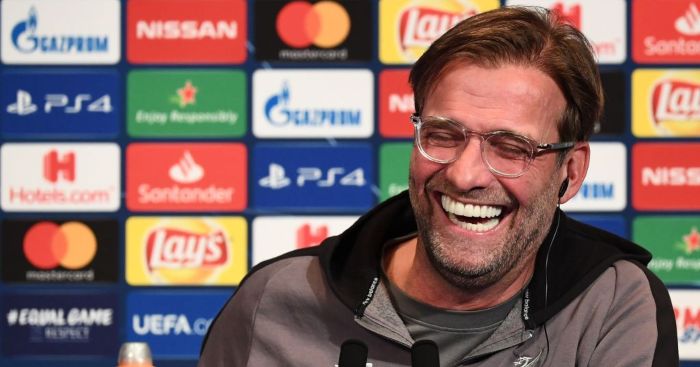 This link is an article that was published by F365 in 2018, along with the article about sir Alex being worried about Klopp’s impact at Liverpool, these have been my two best reads.

I have watched Klopp over these months and I have been thinking, maybe, just maybe Klopp is about to perform his biggest coaching miracle. Retaining the league this season will surpass the achievement of the first league title at Dortmund.

Now, I am not saying the players he currently has are inferior than those he had in 11/12, but he has had such a major disruption to his setup this season. At various points, Mane, Shaq, Keita, Alex, Thiago, Hendo, Fabinho, Matip, VanDijk, Alisson have missed at least one game and now Gomez, Arnold and Robbo are out while Salah is a doubt. Even an astute chess player will find it difficult to juggle all the missing pieces together, but i feel like Klopp will try.

He may fail but if there is anyone who will be a glorious failure, it will be Klopp. He would gladly play in a way that will make Liverpool to be the cynosure of all eyes. And just this morning, I read Winty’s article about Klopp not being interested in using the market and I smiled. I think I know Klopp enough to be satisfied with ALL HIS DECISIONS.

The prospect of Hendo, Milly and Wijnaldum just fighting against all odds just thrills me. This season will be my most enjoyable as a Liverpool fan. Let’s get started. Bring on Leicester!!!
Emmanuel

In response to Robbie DFC Èire from Tuesday’s mails. A nicely structured email that tries to make a reasoned argument, but falls down by being factually incorrect in almost every way feasible.

Firstly, Matt Targett is an attacking full back. His and Grealish’s interplay last season was the source of a few goals. Off the top of my head…Brighton at home, Watford at home, Leicester second leg and that’s without checking.

Secondly, he stopped playing central early last season, not this. Whilst he had a quiet handful of games at the end of the year (and still scored the goal which kept us in the league), he dominated many games both from the left and centrally, as he has been doing for three to four years now.

Finally, to suggest Grealish needs space to perform is to both misunderstand what makes him exciting and contradict your previous points. Last season he had a lot less space than his contemporaries, because he played in a Villa team who finished 17th, spent the whole season doubled up on as he was against Leeds and still was only second to De Bruyne for assists etc. It’s his ability and bravery to take look for the ball in tight spots which magnifies his genius. Now that he plays in a better Villa side with Watkins, Barkley, an integrated Trezeguet and a fit McGinn, he’s performing to a higher standard as teams can no longer pay him the attention they did last season. The same would be true at the ‘better’ teams (such as United and Arsenal…lol). I agree space makes him better, as it would anyone, but he certainly doesn’t need it and arguably needs it less than anyone in the entire country.

Anyway, in summary, I’m glad United went for the cheap option, Arsenal are a mess, Spurs were laughed off with a bid of 20p and Josh fucking Onomah in the Championship, Liverpool have been destroyed, City don’t spend the money required on one player and Chelsea have blown their bank. He’s Villa, he’s one of our own and I enjoy watching him every week more than I have any player since Yorke or McGrath. Bidding now starts at 120m…and I doubt anyone has the minerals.
Joe the Long Suffering Villa Fan

Its mid-international week, which means in true F365 mailbox tradition, anything goes.

So, I read a couple of mails last week about Sam Matterface commenting about Dominic Calvert-Lewins clothes and fashion sense.

Now, this was undoubtably a bit weird, but I also think he would have said the same about Tom Davies if he ever got near the England team, so I don’t believe this to be sinster in any way.

Some people also took this opportunity to pine for Clive Tyldesley, the man Matterface replaced.

Now, while there is some nostalgia involved for many people in Clive’s commentary, my own view is that he got a bit too scripted in latter years and maybe it was time for a change.

I haven’t checked, but I am sure Clive replaced someone once upon a time when he got his chance.

This brings me on to the main point of this, and something that has been grinding my gears since the summer.

Clive, when replaced, took it upon him self to post a woe is me video on Twitter, at a time when millions around the world were losing their jobs.

He didn’t actually lose his job remember, and was just moved away from main commentating duty on England games.

His ability to keep a straight face during it was possibly the most impressive thing about the whole thing.

Its not nice to be replaced, but it happens. The past want always better,

Can we all agree that if Arsenal had signed all those players which their fans consider nearly signings (WTF is that anyway either they signed or they didn’t) then Ronaldo and Messi probably would have spent 50 – 75 percent of their time in Norf Laaandin on the treatment table (targeted by some agricultural defending and the outstanding Arsenal physios). Then after a tabloid expose involving the words instamodel, hippy crack and illegally parked Maserati they would have been loaned to somewhere in Europe probably Spain somewhere like Betis or Malaga, returning after showing some promise then being sold for a ridiculously large amount of money to Real or Barca. That money then reinvested at Arsenal into some teenagers in the French league.

They probably would not have been the Ballon D’Or machines we know and loath/love today.
Simon, Woking

The French don’t have a leg to stand on looking for an excuse for leaving Laporte uncapped. “Too insular to mix with the personalities in the established squad” have you ever heard such bollox this from the country that championed pricks like Benzema and Ribery even after the whole black mail thing. And the current crop are all so loveable because the likes of Anthony Martial the permanently sour prick and Paul Pogba have that personality that makes everyone just love them, must get on brilliant with everyone. Laporte has been near flawless for 3 to 4 years now when compared to the likes of walking calamity Mangala or the French Otamendi otherwise known as Samuel Umtiti who have been getting in. Deschamps should just admit that he hates him on and let him switch to a country that would appreciate his brilliance.
Aaron CFC Ireland

Flying may be bad for the environment but football has reduced their carbon footprint significantly by severely reducing the millions of fans every week who used to drive, train, bus and fly to games.

Maybe we should rather think about the future when fans return and start providing season ticket holders with free access to live streams of away games to reduce environmental impact of the game? A few footballers travelling is nothing compared to millions of fans across the globe.
Jon, Cape Town (within walking distance of absolutely no football ground but I can see Table Mountain from both my desk and my pool)

Part of me wishes Arteta did play for England, then we could have had the S.A.F (Trademarking that. No one of relevance has it right?) debate forever.
Dale (Leeds)