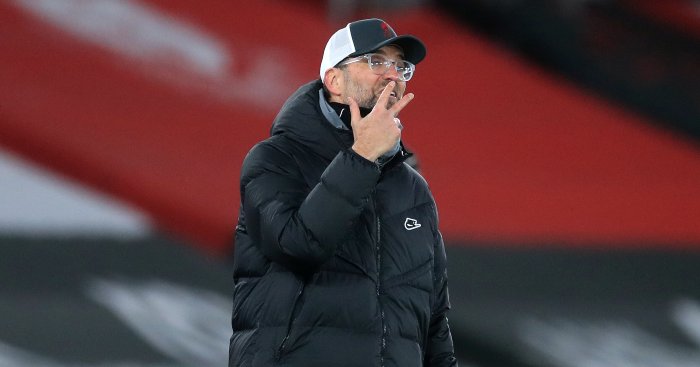 Send your thoughts on Jurgen Klopp, narratives and more to theeditor@football365.com

Klopp for PM
Got to say, I’m starting to look at Klopp and wonder if the days of him getting praise – for anything – are gone.

He is doing a fantastic job under the circumstances, but gets slated left right and centre, no matter what he does. Last year, weak team in the cup, absolutely battered on socials for not playing a strong team. This year, plays a rotated but still strong team, slated (from your Joe Williams, amongst others).

I don’t think Klopp is asking for sympathy, he is asking for equality. Wilder has a dig at Klopp, Klopp digs back. “Oh look at Klopp, putting the small man down.” José moans about refereeing decisions, haha look at José doing what he does. Klopp does it, “won’t stop moaning.”

The government will always be criticised for not doing the opposite of what they have done, regardless of outcome, as those who can’t do it, always think they can do better, and it seems Klopp is now in that boat too.
KC (Klopp for PM)

Sod the narrative…Klopp was right
One expects to see some pundits attacks Klopp for fielding  strong line-up and say that negates what he has been saying about fixture piles ups this season but it is a sham to see an intelligent website like F365 following the herd. Klopp’s overall message is correct- there are too many fixtures this season packed into too short a time frame.  This could have been avoided had the EFL decided to scrap the Carabao Cup or UEFA the Nations League.  Neither did so and, in a way, that’s fair enough as both organisations need the money.

Klopp’s point remains valid, however, that trying to fit ten months-worth of fixtures into nine months with a tiny pre-season and then an international tournament summer at the end of it is detrimental to player welfare and to the overall quality of the sport (though it has led to a more exciting title race than two of the last three years).

Klopp’s secondary point is that broadcasters have a responsibility to try to keep reasonable breaks between fixtures.  Again, there is an argument against that – the broadcasters pay for the product and are entitled to use their slots to promote what they regard as the fixtures most likely to get viewers and therefore advertising revenue.

On both points, therefore, Klopp is making valid arguments, and though there are counter points to be made they lie beyond his ability to fix them (he doesn’t control UEFA, the EFL, Sky or BT Sport). Klopp’s overwhelming priority, however, is to win games of football for Liverpool Football Club and, more than that, to win trophies for Liverpool. No pundit is inside the Liverpool training ground or has access to the medical records on each player at the club.  Yes, players were at risk of injury but players are at risk of injury every time they step onto the field. Players also need rhythm and form. Fabinho remains a (very good) work in progress at Centre Back and Klopp may well have thought that another game under his belt would be a good thing. Liverpool played (terribly) on Monday and, aside from the Villa game, do not have another until Sunday week. Leaving players out of form without a game for 13 days before the biggest game of the season so far is also a risk and, Kopp may have calculated, a bigger risk than playing them against Villa’s kids.

In the current moment, Liverpool have a (mini) crisis of form, they do not have a fixture pile up. They have played 5 fixtures in 21 days and by the time they play Man Utd they will have played 6 fixtures in 30 days (1 game every 5 days). The Brighton game came in the midst of a period when they played 6 games in 18 days (1 game every 3 days). You do not need to be a sports scientist to work out that the former period was much more likely to produce injuries than the latter.

Klopp’s selections against Villa do not ‘undermine much of what he has previously said about fixture congestion and injuries’ and will not if and when Liverpool ae again asked to play Wednesday evening and Saturday lunchtime. To suggest otherwise is simply lazy, narrative-led journalism which this website should be above.
Andrew, Cambridge

Perspective
Read sean’s email in the mailbox. It was a good read till i reached the end. He says “at the moment being a liverpool fan is tough”. I mean really sean, is your club really in that bad a state?? Just because your team dropped some points and struggled slightly for one half of an fa cup game????

Your most important player,player that leads from front like keane ,defends like a clone of Ferdinand and Vidic together, pops up with important goals all the time is out for almost all season along with so many other casualties all over the pitch. In spite of all your team is top of the table and favourites to win the league,your team progressed to the next stage in europe again top of the group and are probably one of the 2 or 3 teams that can stop bayern ,progressed to the next round of the fa cup.

Well in, Villa
I feel like Villa should be commended as a club for not simply forfeiting their cup game due to covid.

I think this idea should be extended to the premier League especially when the reason that city couldn’t field a strong first 11 was because their team member decided (again) to host an illegal Xmas viral super spreader party.

I wonder, would city have been so quick to contact the FA if their choice was field a youth team or fofeit the points? This lack of real consequence for holding super spreader events means players will carry on doing it. And teams will carry on publicly condemning them and having complete apathy behind closed doors because why get worked up over something that has no consequence? For city in particular it’s actually a benefit to move an important game to a date in the future when aguero will likely be fit and playing again.

Politicking boxes
Appreciate F365 has always had the reputation of flipping the bird to those in power in the football world, but I’ve really appreciated the recent uptick too in slightly more scathing views of things going on in the world and unashamed principled views for things like the Karen Carney debacle (f**king hell, what a shit show, Dave’s article was spot on).

‘Stick to football’ has always stuck in my craw, and being a lover of American sports (where by in large the stars don’t give a damn about your fantasy team, conservative views or puncturing your precious worldview) the UK has always been behind in supporting those who use one of the few platforms available where minority/underrepresented voices demand and get attention. The traditional media at this point seem like they’re set up to resist this, so places like F365 that stick the head above the parapet and say ‘Actually, this is bullshit, what are we doing here?’ are great.

Add to that a majority of football fans being generally excellent people (potentially even a reasonable number of Millwall fans) as seen in all the charity supporters trust stuff (I see a lot of Arsenal stuff going on, but I know it’s replicated across other fanbases) and it throws even more into light the miserable, bitter world of tabloid football journalism.

So keep on plugging, it’s a pleasure to read.
Tom, Walthamstow

Do as I say, not as I do
Loved how Anthony called out someone who said resting Eric Baily was a disgrace but they went on to say Bruno Fernandes needs a break. Brilliant contradiction spotted.

However, Anthony fell in the same trap by suggesting Ole Gunnar Solskjaer is doing a better job than José Mourinho, Louis Van Gaal and David Moyes but wants people to not compare him with Alex Ferguson because that era is gone. They’re all gone mate with their eras.

Snarkiness aside, completely agree with the sentiment on general overreaction these days.
The Vocal Minority

Everton VAR
What’s the point? Seriously what is the point.Was it to use 8 blue and red intersecting lines to triangulate the body position of various players? Like hell it was.

Perhaps the rule needs revising because its ludicrous that you can be deemed to be gaining an advantage when you’re feet are in an onside position.

I’m not going to bother watching matches. There’s no point as you can’t involve yourself when the game’s happening. I’ll check the result and watch the highlights if they’re worthwhile. Seriously f**k this.
Michael

Buy: Christian Erikson for the lols but really Erling Haaland as he is clearly the best young striker on the continent [Mike didnt say i had to be realistic]

Sell: Okay about 6 players could go here so really just start with the biggest drains on the wage but not Ozil, I will miss the tweets! So David Luiz and/or Willian. If we are going to 4 at the back then Luiz does not get into the team but could have a future as a coach and Willian is clearly only suited to the US league [neither will leave]

Loan: easy. Ainsley Maitland-Niles needs to be allowed to decide on a position and go on loan to play in that position and then he is either good enough for us or not [though if he wants to be a jack of all trades for us I would be happy.
Murray