Home Mailbox ‘Toothless’ Liverpool have been completely figured out 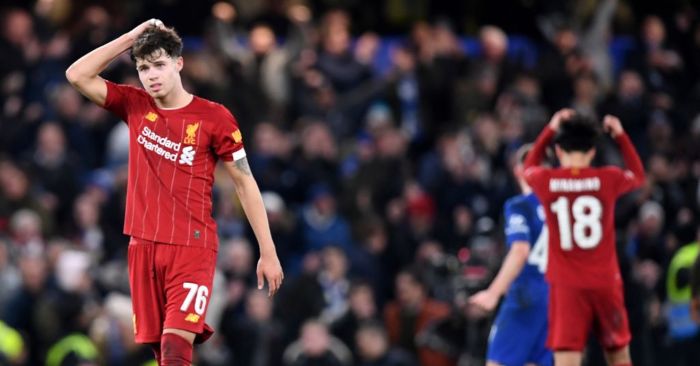 Happy Gilmour
Well what an enjoyable Cup game that was, I’m not sure how I feel about the FA Cup not being played on a weekend but the result makes it feel better.

Top performances from Billy Gilmour, that young man is going to be something special one day, he certainly has all the potential in the world, a very consistent and reliable talent, and Kepa returned to the starting XI and put in a top class performance, maybe it was just a blip in form after all.

One thing that did come to mind last night was how does Adrian go from pulling off a world class save in the same minute as committing an absolute howler? Answers on a postcard
Mikey, CFC

Andres Iniesta and Xavi have posters of Billy Gilmour on their bedroom walls.
Aaron. CFC. Ireland.

Liverpool have been figured out
Having watched the last 4 games in which Liverpool have lost 3 games, admittedly across 3 competitions, some very alarming observations.

Lampard said Chelsea had effort, focus, determination, and quality. All things frankly Liverpool have lacked since the Atletico game and during that game too.

The irony is teams are now pressing us and we dont know how to manage, we have stopped pressing for the best part of the season and struggling to create chances. Our midfield looks seriously toothless without Henderson and concentration levels are scarily low.

Earlier in the season Sheffield Utd Manager was very complimentary about our work rate, and desire, both are under serious question right now. I admit to only win the league would be disappointing given how dominant we have been throughout the season, something isnt right and I certainly do not feel good right now about our season and more worried about next season. Its obvious our current style of play has been figured out.

Lets see how the season plays out.
Ash, LFC

Just thought I’d write in before all the negative comments about Liverpool come in.

It wasn’t a weak team last night , Jones and Williams deserved starts last night- without them vs Everton and Shrewsbury we wouldn’t have even been at the bridge last night.

Yes, Adrian made a howler but we just weren’t at the races last night. So Liverpool need to move on. Chelsea played well and took their chances.

Already certain media outlets on the radio are creaming themselves about a crisis at Liverpool and three losses out of 4.

We will win the league and that is literally all that matters this season. So… cool your jets and relax. Find a bit of perspective ( I include you at f365) it’s all okay.
Ade ( Guildford) 7 is on

OPINION: This Liverpool stutter has made minor winners of us all

Neither here nor there
Dear Editor,

Fresh from the game at Chelsea tonight, I have to say that Liverpool were neither here nor there. It was a very awkward assemblage of a team. Curtis Jones playing alongside Lallana and Fabinho, one back from injury, one never plays, both he’s not used to. The whole team kind of smacked of wanting to show effort, but not really….. In terms of selection. Not devastated, not happy. I guess I reflect the selection.

On a more serious note. Two things. First the Liverpool fans, of which I’m one and in our end – I would say 50/50 rampant sexism towards the female assistant referee. Not good enough. I was embarrassed to hear it.

Second, Chelsea fans singing about Scouse unemployment. I know the more reasonable fans will agree, this is shameful. Not all Chelsea fans by any stretch, but still enough. Hang your heads.
Marc (London)

A ‘blip’ or something more?
Firstly, can I commend those ‘Pool supporters on F365 who have consistently called for restraint and caution, and from the get-go, as this remarkable season for their club has unfolded.

For their fellow fans who didn’t heed this sage advice?  Well, the last ten days is why.  Enjoy a complete lack of humility and, to coin a phrase down here in London, “Give it the Big ‘un” relentlessly and, as sure as eggs are eggs, reality checks turn up and bite you on the arse.  In this case, almost three in a row barring the scrape past West Ham.

I’ll leave it to the Anfield faithful to dissect what is ‘going wrong’, if that is even an accurate description of current events rather than just a ‘blip’, but it seems to me that the lack of shots on target for Atletico, Watford, and now Chelsea must be worth analysing?

It is a common enough adage that you can best judge a team or, indeed, an individual, not when everything is going swimmingly, but when either encounter adversity.  The League title is in the bag (unless Covid-19 dictates otherwise) and the next fixtures in March are AFC Bournemouth (H), Atletico (H), Everton (A) and Palace (H).  Just a fortnight ago, Madrid aside, who would’ve thought that Liverpool would’ve lost any of the PL fixtures?

Of course, and given the outstanding run of games Liverpool have been on without a loss, then I’m sure the odds will be firmly with them going on another such run.

That’s three defeats in four and Liverpool were hardly convincing against the Hammers.

Yes they have a massive lead but if I were Klopp, I’d be getting on the phone to Arsene ASAP to find how you deal with a team that’s just come off a long unbeaten run.

After Rooney dived to steal the points against us at Old Trafford, it took us a while to get back on an even keel. Liverpool should be fine but a team this good should be winning more than one trophy this term, however long the wait has been for the league.
Graham Simons, Gooner, Norf London

Don’t even care
Meh. We look a bit sh*t but if we hadn’t conceded the silly one early or scored one ourselves it might’ve looked really different.

Origi taking a deserved one year break from football after scoring a series of wildly important goals. Good for him.

As long as we beat Bournemouth on the weekend I really won’t care.
Minty, LFC

Bugger
2-0 down to Chelsea with 10 minutes to go. Bugger.

Anyway, trying to look on the bright side, I am hoping that having this slump now might help avoid complacency at the start of next season. The team has gone alarmingly flat and seem to have forgotten how to play with any intensity. Simple mistakes are creeping in and it doesn’t look like the players are following the ‘take it one game at a time’ mantra anymore. They will need to reboot quickly ahead of Atletico or Simeone will be laughing. So in summary, bugger.
Kieran

My Lfc supporting wife doesn’t care about the FA cup. I do, and am really disappointed by losing to Chelsea.

Attempts at silver lining are:
– Chelsea deserved it.
– It’s a repeat of the Watford wake-up call we need ahead of Atletico.
– I only wanted the league anyway.
Aidan, Lfc (appreciate it’d be hilarious, for everyone else, if we can fk up the league from here)

The delayed January blues
Well it seems Liverpool were so good this season that we managed to avoid our standard January stumble for almost a month.

But the only guaranteed things in life are death, taxes and Liverpool having a poor January, even if we only take delivery on late February.
Brandon, LFC, JHB (12 points and counting)

Deliver Trent
Neco Williams looks a very decent RB but he is no Trent Alexander-Arnold. For all the criticism the #66 gets  for his defending, Liverpool miss him dreadfully when he is not on the pitch.

They are simply creatively inept without TAA. The defeats against Watford, Chelsea and Atletico Madrid have all proved how important it is for Trent to be fit and on form. Rest him and they are toothless, but if they play him when he is tired and he has a bad game they are equally screwed.

Williams is good enough to substitute as a regular RB, but Klopp will need to spend money and get a decent creative player in to replace TAA when he needs to rotate. A team like Liverpool should not be so dependent on a 21 year old that he has to play 50+ games in a season. That’s insane.
KittLix, Queen in the North

They’re unbearable now. Can you imagine what they’d be like if the accomplished  any of those feats.

They’ve begrudgingly assembled a really good team there and have walked the league so congrats.
Imran, Manchester

Solskjaer bingo
It’s always refreshing to read about why someone doesn’t like Ole.

Is this one gonna be about his tactical naivety, opined by a Football Manager master who successfully chooses to play thru the middle? Or about how he makes subs too late? Or how he doesn’t want to play Greenwood and Gomes every match?

No no, my favorite are the ones about his personality. How, absolutely how dare this man talk to you with a smile on his face. How dareth he get his player’s back and reiterate one’s worth to the team? Who does he think he is to point out silver linings in defeat? Where does he get the nerve to have an accent?

Don’t worry, the media cycle and Pereira’s inability to see a pass will soon make Ole just as mad at the world as your scornful self, so keep you chin up, just be careful not to shove your nose too far into anything distasteful.
N.V.M. (And its saaaaaad)

Which traditionalist hill are you prepared to die on?
I’ve been wanting to email about the JN piece about the amount of football content there is and although I had a whole thing about the “navel gazing” within football writing planned, I’m too late now to put that together (work got in the way). Instead, I’ll ask you all a question that stems from his honest and understandable admission that he doesn’t feel like he belongs with the kind of output The Athletic put out:

Which of the dearest of opinions you hold about football is the one that could easily leave you open to be painted as “gammon-like” by people who like to label people as such? Mine is mainly being anti-VAR, but my opinions on sliding tackles/high foot challenges/Arsene Wenger’s latter years/that I actually find Pat Nevin quite annoying/I think some wingers ought to concentrate on playing a good ball in rather than crying to refs after the second challenge in their run/managers at cup finals should wear suits etc are also good shouts.

So come on, tell us what your closet-traditionalism is. We’re all friends here.
Stu, London

Waffle
When the heck did Belgium become number one in the FIFA rankings?

Completely missed that one…
Ben, Up T’North