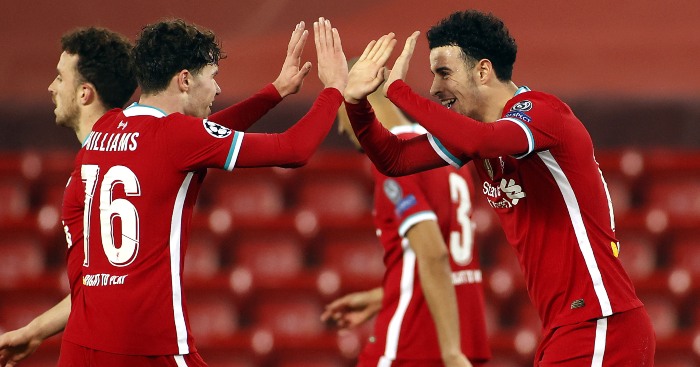 Thank you for your mails on Curtis Jones and more. Send your mails to theeditor@football365.com

All hail the Liverpool kids
Early on in the game the ball fell to Curtis Jones on the edge of the box and he took a stab at it which fell pretty harmlessly into the keeper’s arms. When it happened I wondered what a 19-year-old Stevie G would’ve done presented with that same chance.

Whilst Jones doesn’t have that same ludicrous desire to smash balls into the corner of the net he does have a cuteness to his game and a lot of guile. He didn’t score from outside the box but I don’t think Stevie G would ever have got into the position where Jones did eventually score from. A few times in the game he used his body brilliantly to shield the ball before using his skill to beat a man an open up the pitch. It’s exciting to see a young player finding his confidence to play his natural game and I feel that his form might have AOC and Keita sweating if they can’t sort their fitness issues.

Kelleher also deserves big praise today. Every time he played last season I thought he looked a bit awful and basically didn’t seem capable of saving anything aimed in his general direction. Today he was everywhere and made a couple of top saves that gave us the win. I wonder if he did enough today to get the nod for Sunday given that Alisson has either done his wrist or got covid.

Next week if I’m not starting up top for Liverpool then Klopp will be playing too many senior players in our final group game. I’ll start my shuttle runs to get fit and ready.
Minty, LFC

Arteta needs windows
I hope all in F365 and readers are well in the current climate. As an Arsenal fan for 35 yrs, we have enjoyed some incredible highs. The recent years have shown a clear lack of direction.

For me, since the Sanchez debacle and Ozil panic contract, we have seen uninspiring recruitment spread over three managers, players purchased for one managers/strategists vision which no longer fit into the plans of the next manager/strategist, but on large contracts supported by bad performances that have restricted the club’s ability to move these players on.

From the top-down, there are inconsistencies in strategies, contract negotiations and some, ahem, inventive agent incentivized player purchases (best way I can put it).

Arsenal’s squad is comprised of a collection of groups collected through many failed strategies – which I think show the problems hindering progression:

– Good signings of Partay, Tierney and Gabriel together with Bellerin, Saka and Aubameyang (albeit on large contract)

Righting a ship is tough when the composite parts are designed for something else. A clear strategy with time is needed to get the squad to a level that replaces competently some of the above groups and their associated financial problems.

No doubt, Arsenal’s performance at present is worrying. Maybe Arteta’s tactics are hindered by injuries or a fear of exposing the weakest parts of the squad. Or, more worrying, it could be the strategy we are embarking on is not the right one as Arteta/Edu have limitations. Partay and Gabriel have been promising, negated somewhat by Willian’s form. Jurys out still out.

One thing I do feel though is you have to run with a clear strategy, changing too much leads to badly put together squads that fit no strategy and create further headaches down the line.

Arsenal fans can only hope that this is the tough part before brighter days ahead.
Michael, Dublin

If Grealish was South American…
After watching Monday night’s match I became increasing frustrated by the antics of Grealish , the screams when being tackled, the dives (which seem to be largely ignored by the media) at one point going down and holding the wrong leg to which he has been caught on and rolling around on the floor . He is a very talented player but watching him made me dislike him, if he was South American I am sure people would be calling him out by now but because he plays for England he seems to get a pass at the moment, I know he gets fouled a lot but he also dives a lot as well. I wish he would ignore the dark arts side of the game he reminds me a bit of a young Ronaldo at Man Utd who was pretty much despised by opposition fans for doing similar things.
Mike

How good is Dean Henderson?
In light of De Gea maybe being out for a few games, it’ll be interesting to see of Dean Henderson is really as good as everyone is making out. De Gea has been poor by his own standards – and for a few seasons he was clearly one of, if not the best goalkeeper in the world. And even now he still makes amazing saves and is amongst the best in the world even if he is behind a colander like defence.

Obviously Hendo is our player and I want us to keep clean sheets and win games so I want him to do well, but after watching Sheffield United last season and in the games he’s played this season, I don’t get the hype. He’s decent enough, makes the saves you’d expect him to and some more as you would expect from a goalkeeper at a huge club. So the question is, is Dean Henderson actually an improvement over Dave? And if he was not English, would anyone really be that fussed?
Daniel, Cambridge

More on VAR
Having watched the MNF debate regarding offsides and VAR..

…I was again baffled by the lack of understanding of the actual problem. As Gary said, VAR will always have to deal with offsides that are extremely tight. Pundits and journalists seem to be treating VAR like it is goal line technology and capable of calling differences with millimetre precision – this assumption is completely wrong. Camera resolution, camera position, player position, camera frame rate, and human errors when drawing the lines all combine to create a margin of error that is much greater than a couple of millimeters. The end result of this is that close offside calls are essentially complete guesses when using VAR.

The FA needs to determine what the margin error needs to be (i.e. the distance between two players) to produce over 95% correct decisions. You could do this in a number of ways, the simplest would be to adopt the Dutch system that uses thicker VAR lines that produce onside calls if the lines overlap. Alternatively, you could ask officials to call 1000 offside decisions generated on FIFA 21 where the exact positions have been computer generated. Or you could create actual examples on a training ground using devices that record body position. This would lead to a minimum distance between two players (e.g. 5cm) where we can be at least 95% confident that the player is offside. Anything under that distance would be onside, thus removing the infuriating armpit offside calls that are killing my enjoyment of football.
Max, disgruntled LFC fan

…It seems to me that there’s a solution to the offside rules issue that ought to be pretty straightforward based on my knowledge of cutting edge tech and IT (virtually none, seeing as you asked). Offside isn’t supposed to catch a stray toe, an outstretched forearm attached to a pointing finger or a wayward shoulder, it’s supposed to catch a player achieving an advantage by being ahead of the last defender. The biggest issue for me is that players need to have at least half a chance of judging this themselves, so we’d be better with a fixed point on the player being to assess where they are for offside purposes. It seems to me that the centre of the chest is a decent place to measure offside from – it’s the place winners of Olympic sprints are measured from after all, where speeds are even higher and margins are even tighter. If your torso is level, then you’re onside seems like a fair enough rule to me.

This could be done in the same way it is now, with TV cameras, but all players now wear one of those sports-bra looking things to monitor heart rate and provide data to coaches. So maybe they could have a sensor in them which tells the VAR ref where they are on the pitch? Would it be much more complicated than the goal line tech which comes up with instant ‘to the mm’ decisions which everyone is generally happy enough with?

What if VAR is working…
My work involves looking at things from different angles, so how about this. VAR is working. The higher number of goals being scored is down to VAR.

Shirt-pulling and general blocking and tugging in the box at corners and free kicks has been almost eliminated. Sneaky trips are now being spotted so players are less likely to try it on.

Sure there are issues, but if you focus off camera rather than on the nit picking detail of one VAR decision over another, the impact is on player behaviour, resulting in a better, more enjoyable game to watch.
Tim McKane

Eight days a week?
Not a Liverpool fan so don’t have an axe to grind, but if Saturday’s Liverpool match had been moved to later on or to Sunday as suggested by Danny LFC NY (probably does have an axe to grind) then would Klopp complain about the proximity to a Tuesday night match against Ajax?

Look, the real problem here is that we have seven days in the week, so playing twice a week (which because of the extraordinary nature of this season means we do) always means that the gap between games will be irregular on one side or the other. Klopp is of course allowed to complain, but he needs to be a bit more thoughtful in who he targets otherwise he looks like a d***.

Simple thing is we should change the week to eight days or just accept that the world is unfair and get on with it, the wildebeest do.
Rob (cue howls of complaint on behalf of wildebeest)

Love for Micah
Great footballer. Premier League winner. Too short of a career. Now we get to enjoy him as a pundit. It can only be, Micah Richards.
Michael FFC (so Cavani missed all of the news during the summer and simply needs to be ‘educated’)