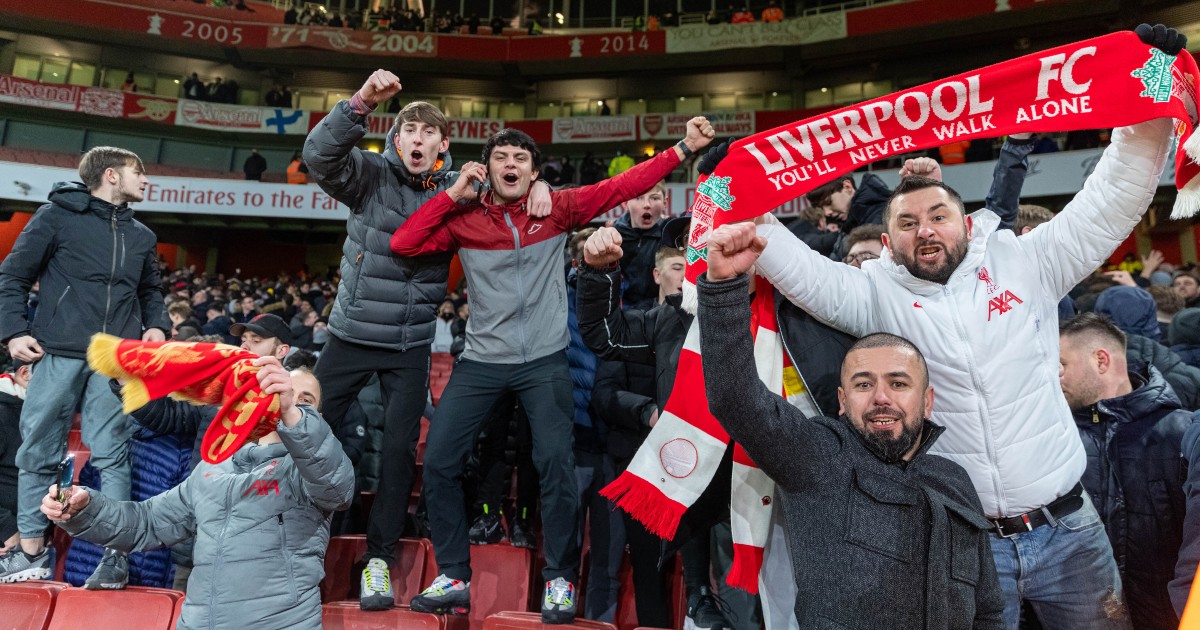 Arsenal are doing far better than anyone seems to believe and things are incredibly rosy at Liverpool. Manchester City, be warned…

Bull shirt
I don’t care how good they were; that away shirt is an abomination.
Stu, Southampton.

So happy
Does anyone get the feeling that with how serene and powerful Manchester City look, Pep’s staring-too-long-into-the-light moment in the Champions League is going to be one for the ages? Something like starting himself, or starting Walker in goal, or six strikers?

Proceed with cautions
It’s the 54th minute during the Man Utd-Brighton game. Elanga has been brought down by the last man and Utd players are furious. Fernandes gets booked for dissent, (we can’t hear anything he says, but I assume he’s protesting the ref’s decision). Ref goes to the screen and watches a replay of the incident. Turns out the Utd players are right. Ref reverses his decision and turns the yellow to a red card. Not Fernandes’ card though.

Question to the mailbox, should/shouldn’t a player’s booking be revoked in that situation, given they were right in pointing out the ref’s mistake?
Pat, Knowhere

Mood swing
I’m guessing Dave Tickner isn’t a massive fan of Liverpool, having them 6th last time and 3rd this time, while justifying Chelsea’s happiness based upon Liverpool celebrations from 6 years ago.

I’d argue that there’s currently no happier side in the league right now than Liverpool (Newcastle maybe but they’re still in a fight). They’ve kept up with City through January when they were meant to fall apart due to AFCON and not only that but they’ve proved that there is life without Salah and Mane. They’ve brought in what looks to be a very good 5th option up front, got their young potential superstar back from injury and looking just as sharp as he did before it. They’re also in a cup final and have a good looking home draw in the 5th round of the FA Cup. The month that was meant to be the downfall has provided the momentum to go into the home straight with positivity and optimism in every tournament.

There’s also the small matter of our African players no longer being able to hold the contract negotiators to ransom and the fans wondering what the club could do with 2 huge transfer figures for players entering the last few years of the their contracts.
marcel g, lfc.

Reading the mood column, I was quite surprised to see Arsenal so low. I’m actually feeling pretty good (once the strikerless January window maudlin feelings left) and I think we’re potentially on the inside track for Top 4 and the data modelling/forcasting feels pretty good about them too.

But the general mood/perception outside of our fanbase is very negative, whether it’s podcasts, post-game analysis or the moronity of sports radio. “Who wants Top 4?” they cry, “Everyone is going backwards”, “Could Wolves spark a dramatic run for 4th?” etc etc. So many pieces looking at the failing of Spurs and United, prop pieces on Wolves and West Ham (who, to be clear, both deserve credit but whom Arsenal have comfortably beat this season).

This is despite the fact that Arsenal could potentially, by next Thursday, be clear in 4th (with 2 home games whilst Utd, Spurs and West Ham have harder ties) and have the best form outside Liverpool and City. January may have looked like the walls were falling in, but Prem wise only contained a perfectly commendable effort against City and a stale but dominant draw,  undermanned, against Burnley who have been giving other teams kittens since.

I get that our rearranged games are all massive, but that belies the fact that our current scheduled matches are less challenging, at least from the table perspective. And if there is one thing Arsenal have been very good at until now this season, it is picking up points regularly against teams in the middle and lower table.

There’s also a good chance, especially if the rearrangements are pushed out a bit longer, that we’re getting into Champions League semi situation, which two of these rearranged opponents you might imagine may care about more at this point. Spurs are still in the FA cup. Arsenal have no distractions.

Now counting ‘game in hand’ chickens is clearly a mugs game which Arsenal have been burned by pretty badly in the past and our squad is incredibly thin – a couple of injuries could absolute throw any advantage we have. But the lack of attention, bordering on outright dismissiveness from the more misinformed edgelord banter pundits, raises the question:

Are Arsenal somehow underdogs?
Tom (Despite social media hysteria, there are plenty of reasonably level Arsenal fans whose original feelings were 5-6th come May, so top 4 represents incredible success and satisfaction) Walthamstow

This year…
I don’t think the league is in the bag for City yet.

If Liverpool win their game in hand then they are 6 points behind City and there are 13 games left.

City’s run in has 3 teams left aiming for Europe and 4 teams who will be fighting off relegation. They also still have to play Liverpool and we don’t know what will happen when we add in mid week fixtures.

Admittedly I haven’t checked Liverpools fixture list to apply the same logic but we know what they are like when they are the chasing team.

Manchester United need a Houllier
It is an odd thing to think United are now roughly at the same distance away from their last league title as Liverpool were from theirs when Houllier took over. There’s a few parallels between the points in between too; Moyes and Sourness were thought to be rightful heirs but didn’t work out; Ole and Evans got the club’s DNA but couldn’t manage the talent at their disposal. But what Houllier was able to do was, what I think could make or break United. Houllier was able to break the idea that Liverpool needed to stick to the ways of Shankly and Paisley. He got rid of egos like Ince and later (to my heartbreak) Fowler and modernised so much around the club and the perceptions of the team. Without him, we wouldn’t have had the success of Benitez or Klopp. (I’d put the Dalglish years down to the dysfunction of the ownership crisis.)

As an outsider looking in, until United have someone to break the link to the Ferguson era and ship out the egos in the way Houllier did at Liverpool they’ll be stuck in the same rut they are now.
Danny

A team of Lingards
I wrote in some while back just about the time Lingard had scored 7 in 10 or something like that under Ole as well as a few for England. Can’t remember the exact numbers but the point is he was on a hot streak. When that fizzled out, there was discussion upon discussion about why his form had fallen away: mental health, distracted by his clothing brand etc etc. My suggestion was he was simply in the form of his life and it would never be replicated. He went some way towards proving me wrong at West Ham but there he was obviously full of confidence as he was finally getting games. The point is he is good in infrequent spurts. Obviously that’s not enough for a team with supposed top tier ambitions and I think that applies to the bulk of the United squad.

There are maybe a handful of players you’d want there right now. De Gea, Varane, Fernandes and Sancho are the dead certs. Maguire maybe, likewise Rashford and all the fullbacks. I think Shaw could come good but Wan-Bisaka is far, far from an elite full back. Dalot and Telles are OK. McTominay and Fred could each be a decent DM but playing both is crazy. You may as well have a training cone on the field instead of Matic. As for the 37 year old elephant in the room – well, what needs to be said? An amazing career winding down, probably an impact sub at best now. Considering the money spent on this team over the last 5 years, it really is mind blowing.

I think Dixon in the morning’s mailbox is onto something. Ralf goes upstairs at the end of the season and can tell the incoming manager who’s worth the time and effort of coaching and bin the rest. Arsenal have taken risks the last two years but at least look they’re going somewhere having got rid of unwanted elements. United just keep piling mess on the mess.
Alan.

Arsenal VAR
The problem with giving reasons as to why it’s right that a certain decision didn’t go Arsenal’s way is that there’s invariably an example of where the same logic doesn’t apply to Arsenal.  David Luiz was sent off against Wolves despite making zero action with zero intent to commit a foul.  He was running perpendicular to the Wolves player whose natural stride suddenly became raising his leg to waist height to make a connection with a defender who wasn’t even looking at him.

I’m a level-headed dude but there is definitely something in the conspiracy theory that Arsenal are hard done by with refs.  I don’t necessarily believe that refs are out to get them but I think they look at Arsenal from a different perspective.  When the likes of Godfrey stands on an Arsenal player’s head they look for reasons NOT to follow the letter of the law.  When Martinelli gets two yellow cards in the same passage of play they point to the letter of the law as to why it was the correct decision.  Any other team would have been given the benefit of the doubt in the Martinelli incident.  They would have considered that he probably didn’t deserve to get sent off for two, admittedly petulant, non-violent fouls.  They would have thought that it wasn’t fair to caution a player twice without giving them the chance to correct their behaviour from a single caution.

Arsenal now have both opposing reputations that they’re soft and they’re dirty.  Pontus Jansson can have both of Bernt Leno’s arms pinned down at a freekick and Arsenal get accused of being soft.  As Jamie Carragher said during the game “Leno should be fouling him” like that makes any sense.  Martinelli and Gabriel get sent off for run of the mill fouls and Arsenal get called dirty.  Arsenal have committed the second fewest fouls in the Premier League this year, have the fifth fewest yellow cards and the most red cards.  They have also been on the receiving end of feet to the head, punches to the face, feet to the knees and a random off the ball kick to the back of the calf, none of which even resulted in a free kick.

Blinkered Arsenal fan or not, this sounds like referees looking for any excuse to send an Arsenal player off and any excuse not to reciprocate for teams they’re playing.
SC, Belfast