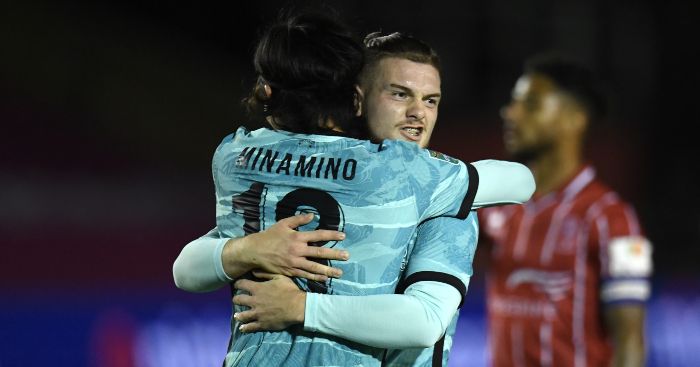 Keep your mails on Liverpool and anything else coming to theeditor@football365.com.

Kill your darlings
One of the reasons Game of Thrones was so successful in it’s early seasons was because they kept refreshing the story line and characters by perennially, and most often surprisingly, killing their darlings.

Liverpool need to do the same. Sell Salah to win the league.

Hear me out (and thank you Dave LFC in this morning’s mailbox for giving me permission to sound ever so slightly less crazy).

Selling Salah demonstrates that no one is irreplaceable (except you, VVD. Please never, ever, leave).

Get’s Jota in the side week in week out, and strengthens our bench by swapping Origi for Firmino.

It frees up space for Harvey Elliott to come back from his loan spell early and shine. Old enough, good enough. He’s our answer to Phil Foden. He’s ready.

And finally, £100m+ gives us a fair whack of cash to throw at a truly marque striker/attacking midfielder in the summer which will allow Klopp to alter his playing style that’s now clearly been studied for 5 years and ‘found out’. We all know there’ll be a few players at Euro20(21?) that’ll do their best 2010 James Rodriguez impersonations and we’ll be in prime position to afford and re-tune around them.

Anyway, none of that will happen but this was a fun 10 minutes away from Zoom.
Sam, LFC, London

Another front three theory…
I got another theory on why Liverpool, and particularly the front three may be off form. Now, this might be crazy, but how about they’re tired? Now, while it might seem like a wild notion, here me out on this. Since the start of the 2017-2018 the three lads have clocked the following minutes;

This includes internationals, so the World Cup, Copa America and African Nations Cup are included, which limits the rest time after a season. What it does not include, which is pertinent, is the travel time to and from international games, (all of which are on different continents from where they play club football), training, pre-season games, time spent injured and the most important fact, they’re human beings.

Before you @ me, I know footballers are paid a shit tonne of money, so some might say they should suck it up. Two things on that, firstly, they’re not the ones using tiredness as an excuse, and secondly, money may buy you an easier life, but it cannot make you non-human. Their bodies and minds will be effected by the same things that can effect us, especially since they are also living and working through an unprecedented pandemic, have famlies and personal lifes they have to deal with, and have to live their lives in the relative publlic eye, where their performace is subject to endless debate, and they are fair game and open to abuse because they happen to play a sport for a team you dislike. All of this, and the minutes, can effect performances; so maybe, we should just cut them some slack.

Cagey games
Pablo’s mail says the Liverpool and Man United games are cagey affairs but I’d suggest that they are traditionally quite aggressive attacking games. The reason that they have been cagey recently may be because they have been managed by Mourinho and Van Gaal. That is no reason for Ole to play like Sam Allardyce.

When it comes to cagey games the pinnacle in the premier league era has to be Mourinho vs Benitez. For what ever reason Chelsea and Liverpool were drawn against each other 427 times a season. In 2006/07 injuries to Chelsea’s centre back meant the Mourinho had to play Essien and Ferreira as centre backs. The famously negative and defence first Benitez played 4-4-2 with a strike pairing of Kuyt and Crouch. Kuyt and Crouch were like a battering ram with Liverpool going 2 up in 20 minutes.

Bit of googling and we find that Mourinho says:

‘Rafa is not stupid and I am not a magician,’ he said. ‘Of course he plays [Peter] Crouch and [Dirk] Kuyt up front because Crouch is too tall for us and Kuyt is too strong. I had been hoping, wishing, we could get through the first quarter without conceding because that would have brought belief and something to build on, but it didn’t happen. You can play in Europe without central defenders, but in the Premiership, where everyone has target men and players who play with their back to goal, it is impossible.’

Mourinho faced with this Liverpool team would have played Pogba and Cavani upfront – assuming that he wasn’t still playing Fellaini of course. Ole’s tactics were out of fear. The same fear that he has shown against the other big 6 teams. Mourinho 14 years ago knew that Ole’s tactics were wrong. Why didn’t Ole?

As for Thiago, Thiago is all of those good things that you say, but if 16 conclusions can say that he may be contributing to the reduced goal threat then I can highlight that it is his first game at Anfield. Had this been Bruno’s first game for United at OT I am sure that would have got a mention.

FA cup will be interesting. Will Ole play for nil nil or does he read the mailbox?
Alex, South London

Best Ever Draw? Oh
Shivam, MUFC mentioned this morning about any games in the Premier League that ended in a draw which we remember fondly, well i think there are a fair few that come to my mind, be it the Andrey Arshavin game against Liverpool or even the Cheik Tiote (RIP) screamer to make it 4-4 against Arsenal.

But for me it has to be the final game of Sir Alex Ferguson’s tenure at Manchester United, when it ended 5-5 at the Hawthorns, Manchester United had twice raced into a three-goal lead, they were 3-0 up by the half-hour mark and later led 5-2, but a Romelu Lukaku inspired West Brom came back to level late on, what an incredible game to end one of the most incredible managerial careers, but you could tell Sir Alex really wanted to win that final game, even with the Premier League title secured.

On the topic of the best draws, but involving my side Chelsea, it would be the Champions League Semi Final against Barcelona in 2012, the Gary Neville moment, Fernando Torres skipping past Victor Valdes and in a single moment making that £50m fee seem repaid in full, it was delightful, pure delightful.
Mikey, CFC (Denying Spurs the title and sealing Leicester’s title in a 2-2 draw was also quite sweet)

Bizarre Liverpool excuses…
So after blaming fatigue, the opposition team’s tactics, and sometimes the wind, the newest excuse from Liverpool is that because they lost Van Dijk, Fabinho and Henderson no longer get to control games from midfield. I have to say, this stuff keeps getting more bizarre and hilarious by the day so please keep it coming.

Firstly, it’s not as if this latest calamity has befallen you yesterday, this has been the case for months now. So, as a team, your manager has in fact had plenty of time to adjust and find a different way of playing (assuming your manager is even capable of that). Secondly, we are 19 days into the transfer window. Where is your temporary loan signing CB that would have allowed Fabinho (who is apparently even better than Pirlo if you are to believe Liverpool fans) or Henderson, or both to go back into midfield? Third, against United, Liverpool had far more of the ball, so how much more of this fabled ‘control’ do you need? Would winning the ball more often to increase the ball possession from 65% to 70% result in more than just one speculative long range shot in 90 mins? Lastly, instead of Fabinho, you had Thiago in midfield. What exactly are Fabinho and Henderson from midfield offering that Thiago can’t? The simple fact of the matter is Klopp is struggling to find answers to turn things around and he, like Liverpool fans have resorted to inventing all kinds of excuses to try and hide their failures.

And a note of the other big excuse still floating around, of the Liverpool front three being knackered. What do you suppose the solution should be to this? A rest? A start to Origi? Minamino? A youth team player from the academy? Any of this would be feasible but you already know Klopp isn’t going to try any of them. He hasn’t in 5 years at the club and I for one would be surprised if he suddenly started rotating now. Why change a winning formula? Several fans of other clubs have pointed out before that Klopp’s lack of rotation could be problematic in the long run. Well, there you go. This season shows the limits of Jurgen Klopp as a manager at the top level. But, at the same time what of the players? Liverpool had nearly 10 days of rest since that pathetic ‘performance’ against Villa’s kids. I’m sorry if I’m being too harsh, but literally the entirety of the internet asked why if fatigue was such an issue, the entire first choice team was starting in that game. Liverpool fans’ response? “There’s 10 games left until our next fixture. Now is the perfect time to play them all and get some form back against kids. There’s enough time to rest”. 10 days later, and the same fans: “We’re knackered!!”. Please…do carry on with the clown show.
MM, Man United, India (Did you know that Australia haven’t lost a test match at the Gabba in the last 31 minutes?)

Celebrations and contact
A thought re: the goal celebration issue. Comparing it to other examples of contact throughout the game is possibly a false equivalence. A celebration, as opposed to a corner (or scrum in rugby), is a form of contact not intrinsic to the game itself, and can therefore be considered as “non-essential”. Stopping the contact doesn’t preclude celebrating, as Leicester recently demonstrated, and there are plenty of examples of pre-planned routines down the years (from Bebeto to Bullard) that don’t involve physical contact. I see it as football’s example of a small sacrifice in the workplace that doesn’t affect the overall delivery of the product/service – it might not have much tangible impact, but nor can it hurt.
Craig, LFC

What a disaster.
Rags

Is excitement allowed?
The Mailbox this morning was published without a single mention of the Mighty Arsenal – yes, “Mighty” – we’ll always be Mighty regardless of what the league table may say, I thought I’d pipe up and offer a contribution.

After an admittedly difficult period between Saturday 17th October and Tuesday 22nd December, CPR was administered on the barely lifeless Arsenal corpse on Boxing Day with a 3 – 1 win over Chelsea.  Since then we’ve had five consecutive clean sheets for the first time since 2009, progress in the FA Cup, and 10 points from a maximum of 12 available in the league.  Our barely lifeless corpse is now up and running again.

So, what are the objectives for the season?  Can I be super optimistic?  Is joy and enthusiasm allowed in this covid world we live in?

There is lots to play for.  The following fixtures between now and the end of March are absolutely season defining:

A good return from these eleven fixtures and March will be a very exciting month indeed.
Naz, Gooner.

Love for Arsenal
I am strong proponent of Arteta out, I still don’t think he is the man to take us to Glory(but I will be best pleased if he disappoints me). Turns out my love for Arsenal supersedes my dislike for Arteta’s coaching methods and style. As for now… It feels good to be a gunner. We gunners these days don’t ask for much…
Kufre, Nigeria