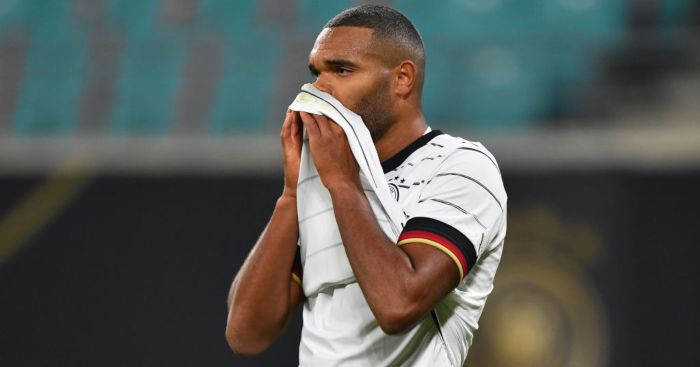 Keep your brilliant mails coming to theeditor@football365.com. We can get through this international break together!

So Klopp’s confirmed Liverpool won’t be entering the market for a new centre half. My crystal ball is saying that means we’ll give Nat Phillips a bit more game time, flog him to Bournemouth for £13m and have already lined up Jonathan Tah for around £8m (plus add ons).
Derek Acorah Jr, The Wirral

I have the solution to England’s formation problems but first we have to simplify the problem.

Football formations aren’t really about three or four figure PINs like 343, 4132 and all the rest.  Actually, they’re more about whether a side has an odd or even number of players in defence, midfield and attack.

So we need three odd numbers that add up to ten.  Good luck with solving that one.  If we want to play in an odd/odd/odd formation, we need to lose a player.  We could do that from the start or, better still, someone could be the designated red carder and spend the first ten minutes kicking the opposition’s star player all over the pitch for as long as the ref will let him.  After he’s sent off, we settle into some sort of odd/odd/odd formation.  It doesn’t matter whether it’s 333, 351 or 531 – they’re really all the same formation.  Just don’t do what we did against Denmark at Wembley and switch to even/even/odd.

And if you’ve ever wondered why sides play better after being reduced to ten men, now you know.
Steve Mills

Conclusions on another Republic Of Ireland defeat

– We’ve now gone 6 games without a goal…longest drought in our history. This is shocking, and its difficult to see any improvement on the horizon. We started the last 2 games with Adam Idah as centre-forward (a young kid with just one start for Norwich this season). Strikers missing include Aaron Connolly, Shane Long (both injured) and David McGoldrick (retired). None of them are bothering goalkeepers at a decent level of late. Depressing stuff.

– The new manager, Stephen Kenny, has been trying to instil a new style of play which involves playing out from the back. This has resulted in us fluffing our lines and giving up one or two goalscoring opportunities to the opposition each game, and once you go a goal behind, having a toothless attack pretty much means your goose is cooked.

– The manager faces an uphill battle, but unless he can get some results soon he won’t be given the opportunity to turn it around. Im reminded of when Big Jack retired in ’96 and a swarm of his players dipped out at the same time (a lot were past their sell-by date by then). Mick Mccarthy came in and endured a torrid start, similar to Kenny. The FAI stuck with him, and he built a fantastic side that gave us some extraordinary days. One big difference was the quality of players coming through for selection – Robbie Keane and Damien Duff in particular. I don’t see that level of young talent on our footballing horizon.

– All in all, I don’t see any other manager pulling up trees with this selection of players available to him. That being said, Kenny needs to find goals and wins from somewhere ASAP, or he’ll be consigned to the history books and dumped back into the league of Ireland.
Browner – downbeat Ireland fan

Just to say about Ray Clemence get this stat 4 home goals conceded in a 21 game season. Liverpool are a good team now but a long way to go to match that team, also 3 European cups is quite good.
Gary in Germany

From that description in the mailbox it was definitely the same Stu. It’s a small old world we live in! I’m sure I’ll catch you in The Three Kings again some time after Christmas Stu for a match and a few Morettis.
Edward Canhands (Think I might know Conor Byrne too)

Nice to see that Bruno Fernandes also reads the mailbox and has weighed in on the Lampard Gerrard Scholes debate.
Shehzad Ghias, mufc, Karachi (United should have signed Grealish)

I have written quite a few mails to your mailbox over the years; usually this is to make some (hopefully) humorous comment, but never once to complain about the content. Sadly today, I feel like I need to, sorry.

John Nicholson’s column about football and travel is the sort of thing that might well stop people wanting to read your site. It came across as extremely preachy, but worse than that it also comes across as very hypocritical.

In recent years, JN has often extolled the virtues of the Europa League specifically because it features teams which are not so high-profile and who come from different countries and cities that we wouldn’t normally hear about. This was usually in comparison to the CL, which he often characterized as being predictable and always featured the same famous teams. But now, suddenly, this competition should be pretty much cancelled because those aforementioned random teams are too far away.

But the more hypocritical aspect is how his moralizing, compares to his own previous life. I’ve been reading F365 long enough to remember when pretty much every JN column was only tangentially related to football, usually to make some valid point, but always featured a lot of references to his rock-n-roll life from touring in the US and playing gigs.
But here is the thing, I’m going to hazard a guess that getting to those gigs used polluting methods of transport. And the audience are unlikely to have all cycled to attend. Even getting to the US in the first place, he probably didn’t swim. More likely he used a plane (and an older, more polluting one at that). And I bet he thought it was all fine.
And this is where the hypocrisy comes in – now that he has had his fun, he wants to deny it to others. He comes across like some comfy middle-class Guardian columnist who was always happy to go on skiing holidays, city breaks, lots of long-haul flights etc. when they were young, but want to stop anyone else from enjoying those same freedoms now.

The rock-n-roll stories were more fun to read. A football website which suggests we shouldn’t play football might not be a great idea.
Michael