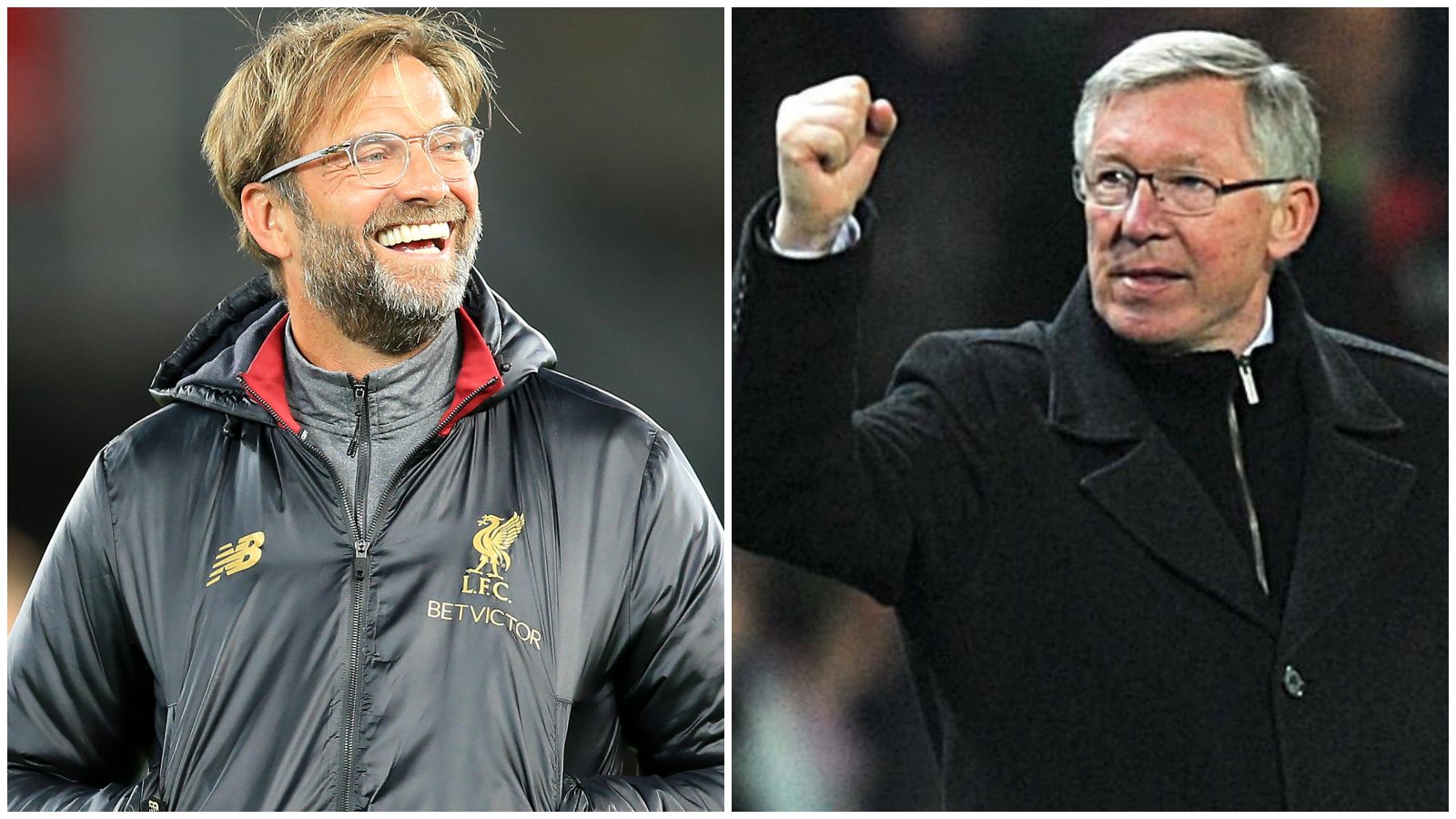 The Mailbox gives Jurgen Klopp a steer on what he can learn from Fergie, while Liverpool fans wanting rid of FSG ought to be careful what they wish for.

Trent solution
Look I’m not an expert, but, if you had a player who is defensively average, but attacking-wise he has the vision of an eagle and a radar of a naval cruiser…

And no, don’t move him inward, the man’s a ball watcher.

Yours in stating the obvious,
Wik, Pretoria, (if your Austrian team can score 3 at Anfield you probably have Klopp’s number), LFC

What Klopp can learn from Fergie
Sir Alex Ferguson’s strengths and weaknesses are well known, but there was one thing that he was able to do better than any manager before or since: Change the team.

He put the success of the club ahead of everything else, and that included the team. He was fearless, and sometimes heartless in the moment, when he saw players were no longer performing to a level, on or off the pitch.

Too old, get another year? No. Gone.

There was more than just fitness and age. Players get bored listening to the same manager or coach for too long. That’s why a new manager can get a bounce. Ferguson was smarter, he got rid of the players and brought in new ones who were excited by being there.

And that is why Liverpool are suffering now. Klopp is a nice guy, he has built relationships with players, he has a big smile.. But he, like almost every other manager, baulks at getting rid of players who have served their purpose. And unless he learns, he will go before they do…

Be careful what you wish for
On Monday morning, Theo wrote “loyalty to the owners is the most absurd thing I’ve read this week. You cant support a financial group, mate.” I dont think anybody is actually suggesting they want to do that, Theo. But whiny fans demanding more signings and blaming any failure on the ownership group prompts less-whiny fans to respond. I think the right word for it would have been “gratitude/appreciation”, rather than “loyalty”. It could have also been framed as a suggestion to stop naively believing that the club would be likely to be better off under different ownership.

When you look around football, do you really see other clubs’ ownership and think “damn, if only Liverpool were owned by them instead of FSG”? From the Glazers to Kroenke to Levy, where are the ownership groups that make FSG look bad? So if not them, are you complaining that Liverpool isn’t owned by an ADUG/PIF/Abramovich type? If so, we’ll have to agree to disagree. But from all the time I’ve spent going to Liverpool I’d find that to be a pretty bizarre mismatch.

Ed Ern’s mail makes some fair points but is again framed from this strange perspective of expecting/demanding owners inject capital into the clubs they own. Despite the fact that this was explicitly always FSG’s stated operating model and this was deemed to be sensible at the time of the takeover by most. When Ed describes Liverpool’s current valuation and annual revenue, he neglects that the increases in these have been the result of FSG’s management and business acumen, given how notoriously poorly the club was doing commercially under both Moore and Hicks/Gillett. There are a lot of unfair takes in Ed’s mail, for example attributing reluctance to sign backup players to FSG as if Klopp himself wasn’t a strong proponent of sticking to #1 targets (which is how we ended up with Virgil instead of backup CB, remember). Ed would have 100% signed Mario Balotelli if he had been in charge that summer, I’ll give him that.

I don’t think FSG are faultless but my impression is that the problems began when COVID hit. It’s just speculation but it seems to me like the planned squad management was not possible due to uncertainty over finances and so we ended up keeping most of our players, leading to stagnation and to having the oldest squad in the league currently. It’s unfortunate but it’s not enough for me to cry about the club not being owned by an unlimited funds state ownership group.
Oliver (Also, Liverpool would have beaten both Forrest and Leeds if they had taken their effing chances, not sure that’s on FSG) Dziggel, Geneva Switzerland

Busy Joe
Has Joe Gomez got other plans he doesn’t want to miss between November 20 and December 18?
A, Dublin

Postcard from the Palace
*Saturday’s game between Crystal Palace and Southampton was one that both teams will have fancied; the hosts started the game higher in the table but got thumped by Everton last time out, while Soton were looking to build on their draw with the Arsenal.

*This is a match that has a surprising amount of grudge about it these days, dating back to a game where Wilfried Zaha was shown a second yellow card for sarcastically clapping the referee (again, how is this punished more severely than swearing) and James Ward-Prowse celebrated the decision more enthusiastically than any goal he has ever scored. Whatever lights your candle, I guess. That match finished in a draw and between then and Saturday, the six meetings between these teams had been two wins each and two draws, but they have all had more yellow cards than goals.

*Patrick Vieira resisted the urge to make wholesale changes to a team that was largely terrible at Goodison Park, but did pick Jeffrey Schlupp in place of Jordan Ayew. Having missed last week through suspension, Cheick Doucoure missed this one because of an injury, so Luka Milivojevic continued as the most defensive midfielder. The Serbian was almost back to his old form, and produced his best performance in a very long time. It will be interesting to see if Vieira ever experiments with these two in front of the defence; this is most likely to happen when enough players are fit to enable a three-man defence.

That said, there were still times when the Palace midfield looked like it went missing. This is a symptom of inviting the opposition forward – if you can let them run at you, they will sometimes run through you – in order to create space for attacking players to get into one on ones with defenders. It’s here where the absence of James McArthur is most keenly felt, perhaps more than anyone else.

*In his absence, however, Schlupp tends to get the nod. I maintain he is the most underrated player in the Premier League; facetiously you might say this is because no one actually rates him, but it’s actually because very little of what he does shows up in the numbers. He’s one of those players who brings out the best in the players around him, with great judgement on where to be and when to get involved.

*In a roundabout way, isolating a defender in a one on one led to the only goal of the game. Lyanco attempted to bring the ball out of defence but was tackled by Zaha. The Ivorian dribbled forwards and laid the ball off to Tyrick Mitchell, who crossed for Odsonne Edouard to prod home.

*Saints will have been discouraged by conceding but they will have known that the Eagles had not won after scoring first this season (two draws, two losses), and they were the better attacking team in the second half. Che “Ernesto” Adams stood out with a couple of good chances, while Palace created very little.

Still, a win is a win and it takes them to the middle of a bunch of very midtabley teams: slightly behind Brighton & Hove, just ahead of Brentford and Everton, and level on points with Liverpool.

*I don’t think I’ve admired Alan Shearer and Chris Sutton this much since the 1994-95 season, but they were both spot on in their assessment that Emi Martinez’s health was unnecessarily put at risk by Aston Villa. On Match of the Day, Shearer called for the introduction of temporary substitutes while an injured player undergoes what both codes of rugby call a head injury assessment, in a treatment room, lasting ten minutes. Unlike rugby, where the potential for a head injury is there for all players, goalkeepers are at greater risk than outfield players by the nature of their role, so if anything, the threshold for requiring an assessment (and allowing a temporary substitute) should be lower. That said, it will be funny – especially with Chelsea’s keeper situation – to see the backup sent down the touchline to warm up with the other substitutes after 15 minutes, just in case.

*If Brighton & Hove’s win over Chelsea was the surprise result of the weekend, the surprise quote came from their captain, Lewis Dunk. Interviewed on Sports Report about the match, he was asked whether the fans had an effect on Albion’s fast start. Dunk’s reply was “I think the crowd were excellent today, if we had that more often at home then we’re going to perform like that”.

Now, my club allegiance means I am more easily tempted to disparage Brighton & Hove fans than others might be, but that seems a little bit unfair. The team and the fans should work in unison, but the onus is still on the players to take the lead by giving the fans something to cheer about, and it’s unbecoming of a captain to sound so ungrateful. It just took the edge off what should have been a celebration of one of the greatest results in the club’s history.

*Last weekend as a belated birthday present for my son we did a stadium tour of Anfield. It was interesting, even as someone who is indifferent to Liverpool FC. I learned that Liverpool invented the concept of supporters clapping the away goalkeeper, and that sometimes, Liverpool supporters get nervous before matches they aren’t sure their team will win. Liverpool being founded is mentioned but everyone immediately jumps ahead to the point where Bill Shankly arrives and, coincidentally, they start winning everything. The 2005 Champions League victory understandably gets the most attention, but the 2012 League Cup win having the second most is a bit of a head-scratcher.

What I would say though is that the murals commemorating various Liverpool heroes (such as Anne Williams) in the nearby streets are spectacular. Spend an hour seeking those out instead.
Ed Quoththeraven

In defence of Garth
If Mediawatch can use a football column to talk about politics, why can’t Garth Crooks?
Robert, Birmingham.