Home Mailbox What does VAR say about the human condition? And other musings 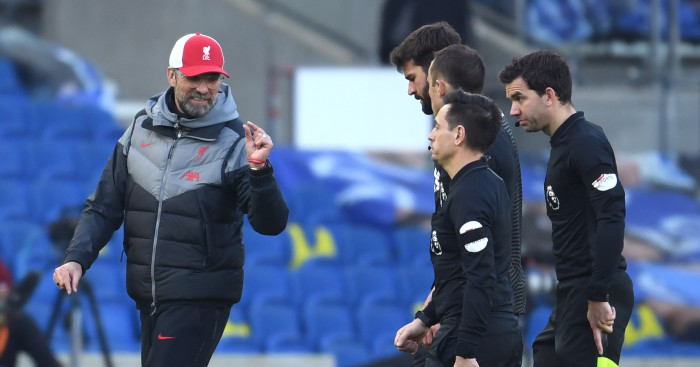 Keep those mails coming to theeditor@football365.com…

LiVARpool
Let’s deal with the football side of things first. Liverpool were both lucky to not lose and unlucky not to win. Ultimately whilst they were winning the game close to the death they also failed to ever snuff out the threat like we regularly did last season and ultimately got punished for that. Sad times but still top of the league etc etc.

VAR…F**k me. I was for it before it came in but this is surely not what it was meant to be. First of all, whether you like it or not there is a margin for error that needs to be given in onside/offside calls. Otherwise we’re forever debating when precisely the ball came off the toe and which body part is the furthest back. Today the VAR used the inside of the defender’s right foot to determine the “onside” line. Why not use his left shoulder given this can be used to play the ball? The inconsistency and the complete disregard for the spirit of the laws has been lost to the idiots in Stockley Park. That’s the most important thing – we’re trading the view of a sh*t ref on the pitch for the view of a sh*t ref with a video camera. The truth is that Salah today (and many others before) are not gaining an advantage but the goals are being ruled out. The Mane goal was undoubtedly an advantage gained; he was about 50cm in front of the play when the ball was played and in the context of football this is a massive gain. Having your foot 3cm in front of a guy who is 25m away is not why the offside rule was invented or an infraction that it was intended to prevent.

I think it’s a shame because today Salah scored and instead of celebrating he wondered how tight the offside call was. It ruined what is meant to be a visceral moment and release of passion. Ultimately if the entire post-match focus is on the way the rules are being applied then they’re not being applied well.

The time before VAR was also frustrating when there were absolute clangers but this new version in which we still have absolute clangers but with immense amounts of time wasted and a lot less excitement is undoubtedly worse. I actually can’t remember the last time I got up and shouted when a goal was scored which I think is a pretty sad state of affairs.

Finally – I was under the impression that the broadcasters, having won their packages of games, pick which teams they want in which slots. Perhaps I’m wrong but on this basis I can see Klopp’s frustration. Why couldn’t Everton and Leeds kick off at lunch time so that Liverpool could play at 5.30pm? I didn’t think it was such a crazy idea that we might try to give player’s with two games in a week a little more chance to recover.

I did love Klopp’s namechecking of Wilder in that post-match interview – clearly no f**ks given and no love lost whatsoever.
Minty, LFC

…As a Liverpool fan I’ll not deny that was a hard watch and just to get it out of the way early, no I didn’t think it was a penalty but it was given and we paid the price for a VAR error in my opinion.

However instead of dwelling on that I think it’s worth saying how well Brighton played and in the grand scheme of the game probably deserved all three points. Other than for the first 10-15 minutes of the first half and about 20 minutes in the second they were the more dangerous team. I know that Liverpool have a host of injuries and also a heavily congested fixture list but we still weren’t at the races for much of the game and Brighton knew exactly how to hurt us. Call it long ball football (it wasn’t) all you want it was bloody effective. Why Connolly was taken off I don’t know. On VAR all three calls for the offside were correct. Salah as minimal as it was, was offside and that is just what needs to be expected at this point. Mane was more clear as was the call against Brighton.

Hopefully this is just a blip and Liverpool will recover against Ajax and Wolves, but it’s going to be a long season (but bonkers and long may it continue).
Alex (LFC)

Chaos Theory
As a Liverpool fan, today’s result was outrageously frustrating. However, is VAR revealing to us that despite our belief in order, we actually desire chaos?

Miguel Delaney posed the question on twitter about gamesmanship being more entertaining and it’s the right question to be asking. We pretend we want justice, but in reality, we want our team to win.  We will applaud the law when it applies to our advantage and fume when it denies the goal. Sport should reflect life and life is full of moral choices. If Salah won a penalty this evening in the same conditions as Welbeck, I know I’d justify it  by saying “well don’t kick through the man in the box if you don’t want to run the risk”.

I want enjoyment and I haven’t enjoyed a goal yet this season because var is in the mix. Var is like the priest standing between a couple dancing in an Irish dance hall in 1970, everybody has fun to a point, but they go home frustrated in the end.
Jamie, Eire

Time Bandits
Right, we can’t ditch VAR really as we’d start being annoyed with the clear and obvious errors being made again…which is why this came to be in the first place.

I do have a simple solution though for this “was it clear and obviously an error” conundrum. A decision needs to have a limited opportunity to be overturned/awarded. For example, if it takes more than 30 seconds to award/disallow a goal for offside, the goal stands. Once you’re coming down to millimetres, armpits or the thickness of the leather on the back of someone’s boot, then you’re talking about margins that don’t really even matter anymore, if there is an advantage from it, it’s negligible and the goal probably still would’ve been scored if the attacker was a few mm further back.

The same would apply for a penalty, they would be allow X number of replays to allow all angles and at a slower speed to be seen and then that’s it. It wouldn’t be down to the ref to decide, if VAR couldn’t decide it was incorrect after all a view of angles and slowed down once, the error can’t have been clear or obvious, so the decision stands. No pressure on the ref to overturn (after they’re told to look at the screen), nobody can argue (but they will) because the limit of what is “clear and obvious” has elapsed, so if an error was made, it’s not obvious enough that can be decided promptly. I mean, we don’t measure every blade of grass to make sure it’s of regulation length? I’ll bet if we did and then postponed games that were 100% compliant you’d have games off all around the league…

We’ll still probably moan though eh?!
Andrew
An unsure Villa fan (I still don’t have no clue where we’ll finish this season)

Pay the penalty
Like it or not, VAR is here to stay. It will be refined in the coming years with more advanced technology but I don’t think FIFA or UEFA or FA will scrap VAR altogether.

So instead of endless debates on it, why don’t they just change the penalty rules? What if penalties are awarded for fouls committed on shots that are goalbound or 1-on-1 situations. For the rest, like Robertson’s foul on Welback or subtle unintentional handballs, just award a freekick inside the box. Is it that hard to change the rules for penalties?
Sudeep Bajracharya, LFC

Troll With It
Wonder how the trolls are going to bend reality this time round when we win the league, considering injuries and VAR aren’t available straws to be clutched at.
James Outram, Wirral

Toe the line
Regardless of any of the other decisions, isn’t it a bit mental that we now describe a toe offside as ‘clear’?
Stu, Southampton

Meanwhile, in the other half of Liverpool…
At what point do we start to worry? I said it a few weeks ago and I’ll say it again. I bloody hate being an Evertonian. We’re such a state at the back – I think we’ve played three at the back recently for personnel reasons, but Keane has now got to step up and lead.

Mind you, Allan is going to prove a superb signing.

Also – Klopp really is a bit of a jeb when things don’t go his way, isn’t he? Ironic coming after I’ve just moaned, I know…

Have a good start to Advent, all.
Aidan, EFC, London