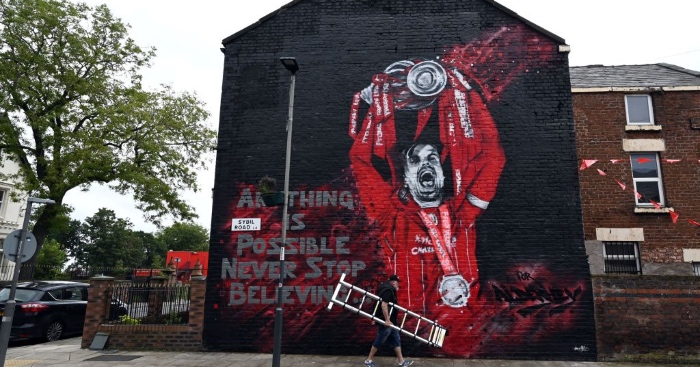 Superhuman Liverpool
Dave Tickner asked why Liverpool aren’t favourites for the title next year. Just look at your own gossip today. Koulibaly, Martinez, Ake already bought. What does a City coach actually do all day? Buy a copy of Four Four Two? Please stop saying that you’re upsetting the elite and that’s why nobody likes you. You are the f***ing elite!!! And nobody likes you because you have no fans!!! I know Liverpool have previously spent big on players but they gained that money through transfers. It mattered to make the right decisions and the wrong ones were fatal. City had an expensive but rubbish defence last year. So an option could be for Pep to coach them and make them better- because he’s the best coach ever. No… The only option is to buy a new more expensive defence. They were the top scorers in the Premier League. So how do you solve that problem? Simple Buy Martinez from Inter. Hobble another emerging team in Europe. What to do with the expensive stars that mistakenly thought they had time to actually learn from the best coach in the world? Well, just leave them on the bench. They’ll get the message soon enough and they’ll come in handy when we’re trying to win the FA Cup and League Cup that teams such as Liverpool and Tottenham don’t respect.

So that’s why Liverpool aren’t favourites. Because they had to be superhuman to win this year and while they have admirable and talented substitutes, there will be an inevitable fall off in standard as you go down the squad because they don’t just buy everyone who becomes available all the time.
Sorry a bit angry this morning.
Michael, Ireland

90s full-back long gone
I’m sorry Ved Sen (Man Utd) but the days when the prime role for a right full back is to only defend against the left sided opposition forward are long gone.

And this isn’t even for the top 6 clubs either. Heck, look at Shef Utd. By your reasoning the centre backs should definitely only be set up to defend the centre forward. But She lf Utd made great use of their overlapping centre backs.

It may not require every team to play total football but I’m the modern game the full backs are expected to be attacking oriented. They should be able to provide defensive cover yes, but also provide an attacking threat that pushes the opposition left sided into the back foot, makes them defend and make mistakes.

The point about tackling is that it should be a last resort, unless used in the opposition their to press and disrupt. When you tackle an opponent it isn’t always clear where the ball will end up. In your own third this can be dangerous. The tackler May be out of position or on the floor and the ball has popped up to the opposition and a chance created. In the meantime, shepherding an opponent away from a dangerous position slows a team member to help cover and often causes them to pass which could be intercepted.

I like AWB. He seems like a solid, honest player. He is not the slowest in the world. But he rarely crosses or make decent passes forward. Utd did shore up their defensive record but they play deeper than they should which restricts their attacking options. It is clear that the current Defense would struggle to play higher up which, again, is what modern teams do.
Paul McDevitt

I’ve a gut feeling that winners of the Uefa Cup/Cup Winner’s Cup/Europa League once were either one off teams in great seasons or growing dynasties on their way to better things – until the ’00s anyway.

A quick glance at winners of Europa League show that ’01 (Liverpool) and ’02 (Porto) saw last times teams won it and then within few years (Porto ’03, Liverpool ’05) went on to win the Champions League.

The idea of Sevilla ever winning the CL is laughable, regardless of so many recent Europa League triumphs. For most of the history of European football the winner of one of the other UEFA trophies was generally seen as a serious contender.

Feels like UEFA comps are well on way to a Premier League/Championship quality & wealth gap – is the gap between Sevilla and likely CL winners any greater than that between Liverpool/Man City and the likes of Leeds/Fulham?
Calum, Scotland

It would have been excellent to have been led into the game by insight and analysis from any of the legion of excellent BT Sport pundits. James Richardson could have provided an insight into the Italian perspective, Rio Ferdinand or Jenas to add player perspectives, Van Persie to be astonishingly beautiful and ridiculously verbose.

Instead we have Paul Ince.

Who can’t pronounce Lukaku and has all the tactical insight of a moth drawn to a lightbulb.

I think Ince, Keown and Danny Mills are all so bad as pundits that they actively make a game worse for me.

Whose the worst of the lot though?
Tim Sutton

Am I missing something?
Am I missing something about LFC being exempt from the UK rules regarding travellers returning from countries on the “bad” list?. LFC are literally in Austria playing football, with a match today and on Wednesday. They appear to be returning on Thursday or Friday. The law of the land says they all have to quarantine for 14 days and not meet any other people, including each other. Yet they have a fixture to fulfil called the Community Shield and then are supposed to start the season on the 12th. 14 days from Friday is the 11th. Why is nobody talking about this?
Hamish (Spread Eagle), LFC

Liverpool in a different type of sh*t
This guy Oliver is really taking the piss on his mail about Gini. A desperation to get published so a counter-take for the ages that F365 is happy to publish to garner clicks in the mailbox. I succumb to it only because of the stupidity, sorry. Selling Gini for £30 to fund transfers? Liverpool have just won the league and champions league title. If they can’t fund £30m midfielders without selling one of their key starters than we’re in a whole different type of sh*t. If Liverpool can’t afford him because of wages, how the hell can Barca given their own money woes.

My favorite line of the piece is “However, we should not necessarily assume that they [a replacement] would be worse.” Sounds like Donald trump defending not wearing a mask during the COVID pandemic. Any actual evidence? No, just unfounded opinion. No thanks.

Oliver, you’re way off the mark here suggesting a critical member of the Liverpool midfield that is 29 and just won the league title and champions league should be sold to fund a replacement that will likely be worse than him and a similar price. Try again.
Adarsh, in quarantine

Hard men don’t like other hard men
I agreed with probably 99% of what Johnny Nic wrote about Roy Keane.

Duncan Ferguson would have still snapped him in two if Roy every tried that hard man bit with him.  Hard men don’t like other hard men.
TX Bill (we’re not signing anyone are we?) EFC

Trent for free
Marc, nothing in the world is free per se.

However, i did read previously that the academy targets to be profitable.

Development costs have to be covered, and i think it’s by player sales after they’ve undergone training and development.

Thus, i agree with u that Trent isnt free, but if the Academy is considered profitable and its $50-100mil “fixed” costs are covered by player sales, wouldnt we have paid nothing for Trent? [besides Curtis and Neco]

I think that’s how academies work. Otherwise we would just have used the $50mil you claim was spent on developing Trent, and spent it on youngsters from other clubs.
Gab YNWA

Post-corona World Cup glory
Imagine if, due to the Covid crisis, the Football Association asked all Premier League and EFL teams to numerically rate their players in the U18 and U16 Academy squads to help guide transfer values should they move clubs before signing their first professional contract and the FA have to mediate on fees.

No doubt most coaches would rate many of their players very highly. “Future England International in the making”, “I’ve never seen anyone with his ability and vision at his age”, “He’s got the football brain of a seasoned pro” or “The next Ronaldo/Gascoigne/Moore with the right management” etc.

The scenario is great. England will win every game from 2025-2035, winning World Cups and European Championships along the way!!

To balance this possible bias, the FA has an outside agency create an algorithm to look at the initial coaches’ ratings, looking at wealth of the clubs, standard of facilities and even prior history at youth development and even bursary fees paid to attract the youngster in the first place. This leads to some ratings being changed. Some go up, some go down. Obviously the elite clubs, particularly the Big 6, benefit, as do those with well run and historically great academies such as Southampton, Crewe, Bristol City etc. Others suffer, and their academy value is downgraded.

There is outrage from the clubs and players. How can an algorithm possibly tell how good they are?? Jamie Vardy, Ian Wright, David Platt are all heralded as examples of academy releases or rejections. Even Scunthorpe United point to the nurturing of both Ray Clemence AND Ian Botham!!!

Eventually the FA back down, the coaches’ ratings are used. Everyone is happy. Academies are stocked full of talent. Players can expect huge wages with their first contract. Clubs are already counting the future £100 million transfer money. 25% of all academy players will be internationals! England will win 3 straight World Cups!! The World is good post Corona!!

If only there was a real life scenario to compare this with…….
Marcus, Cheltenham