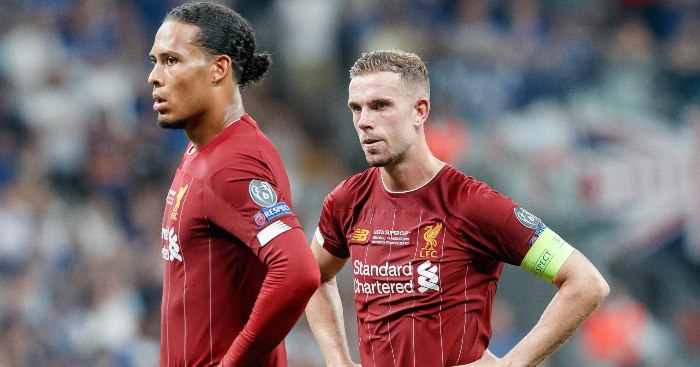 Send your thoughts on Liverpool and much more to theeditor@football365.com

Right to reply
This is going to seem pick and choosy, but there were a lot of responses and I’m a tad busy. I doubt anyone will be offended if their point is not addressed.

Firstly, let me clarify something: as a person with something of a functioning brain, I am indeed capable of recognising that the individual mailbox letters do not represent the views of everyone. So if you believe that lives are more important than football, my mail did not apply to you. I’ve met decent LFC supporters. Well, one at least. Christ, I once worked with a kindhearted Chelsea fan, so am able to accept that such things are possible.

I do indeed know that LFC are not the only club with a vested interest in getting things completed. The shit-throwing will carry on for years to come, no matter how the season resolves. But I have yet to see any supporters of other clubs tell us that people die all the time, flu kills x, car crashes kill y, so let’s just get on with it. It’s beyond callous. It is the absolute disregard for life that I cannot accept. I, like millions of others, have lost family members to this, and have others who stand no chance of survival should they get it. So consider the “Well what’s one more dead person?” attitude to be completely unforgivable. Clive clearly disagrees, as despite the multiple occasions on which I have discussed the severe depression that has gripped me for over thirty years, he felt it acceptable to tell me to kill myself. Over a football opinion. But Clive also chose to use his mail to defend the Tory party and their decisions. Those decisions that have given us one of the highest per capita death rates in the world. He also beats the “but won’t somebody think of the economy?” drum so beloved of the likes of Ian Duncan Smith. Clive, when you side with the man who thinks the disabled are a burden, you’re making bad choices.

Minty, we may have disagreed in the past (I feel like we have, it’s generally a safe assumption), but I agree with what I think your final paragraph is saying. If anyone thinks I am suggesting that LFC’s supporters are responsible for the deaths then they are too stupid to engage with. I know who is responsible. It’s Clive that’s confused. And I know how the Tories feel about the North. I also know that a lot of the North forgot about that during the election.

Dave, read the paragraph above. See that bit about being too stupid? That’s for you. Extra idiot points for the racism comment.

The comments about lockdown easing and things going back to normal elsewhere. Probably not ideal to follow the lead of others now after going our own ‘f**k it, its mainly old and disabled people and we can do without those’ way to begin with. It’s not comparable. And celebrating those 6 positive tests is on a par with Trump’s statement that having the highest number of cases is a badge of honour.

I’m sure you’ll excuse me for ignoring the team votes on how to proceed, as I don’t tend to take pandemic advice from Jay Rodriguez.

Mark in Toronto. If you think I’m not angry at this f**king evil government then you obviously haven’t met me. Well, the fact you live in Canada probably confirms that. But, to absolutely lay this out for everyone: I know LFC and their fans are not responsible for the global pandemic, nor the Tory kill-the-claimaints policy. Sigh.

Thomas, I’d love it if Jack was 16. It would be about 6 years ago, when life was nicer.

“Probably the worst letter ever”. You obviously weren’t here when Conor was pretending to be two people. But thanks.

I could be wrong, but I don’t think I even offered an opinion on whether or not LFC should be champions, so the replies along those lines are a bit odd.

I saved Turiyo for last, for two reasons. Firstly, I wish it felt good. I wish it really was just callous trolling from a giggling and lonely teenager. But it’s not. It’s pain and anger. But that leads onto my second reason. I only caught up with the mailboxes this morning, and your response was the first I saw. And it reminded me of being in your wonderful country, and the incredible people within it. And it reminded me that I hate conflict, and more so the governments and churches that manufacture and fuel it, who divide us and press hatred into our souls. So for those who felt genuinely hurt by my words, for whom they did not apply, I apologise.

And for anyone who has argued that people die so let’s crack on, you’re a c**t.
thayden

When the referee falls over

After decades of watching the sport, players still do something new, something you have never seen before

The rise of intelligent podcasts

Champions’ lead
“Slyly” condoned thayden? I EXPLICITLY condoned him. It is quite possible to be outraged at millionaires and Daily Mail types expecting people to risk the health of their families for our entertainment AND find Liverpool fans losing their shit at other people’s football opinions very funny at the same time. Take my rantings about neoliberalism seriously and my pops at fans of my club’s biggest rival a little less seriously.

Seeing as you asked so nicely though, I’ll respond to the questions in your rebuttal.
1. Yes, form.
2. They lost 4 of their last 6 and from what I could see, gave up in the 2nd half of extra time against Atletico. That, in my opinion, was pretty alarming for the European champions. Their next game was away to Ancelotti’s Everton. Serious chance they’d have lost that one given their form. 2 games later they’re away to City. Are we pretending the idea of them losing that one is outlandish?

Especially if their last few games included a spanking from Watford, a loss of their title and a defeat in their derby? Two teams fighting relegation followed City. Sure, you’d be betting on Pool there but are we going to say a team which surrendered their European crown and might have lost 2 of their previous 3 in the league, or 6 out of 9, could never lose those two games as well? Arsenal and Chelsea are two of their last four.

Arsenal, Chelsea, City, Everton; 0 points not out of the question.

Villa and Brighton; 2 points not out of the question.

Palace; One of the best defences in the league; 1 point not out of the question.

A flying Burnley and an away game to a Newcastle team with one of the 2 or 3 best home defences in the league; 2 points not out the question.

That’s 5 points. All I said was that I think Liverpool should have to play those games before being crowned champions. Now if you’ll excuse me, I have to call my curly haired caterer-beating friend to help him write racist jokes about Mexicans for our tv show.
Eamonn, Dublin

Bless. Firstly I don’t loathe Mourinho, he has been dealt a difficult hand particularly with injuries and potentially a view that he is now yesterdays man but I would have him over Ole any day of the week.

Players wanting to stay in London would chose Arsenal or Chelsea over Spurs, perhaps if it was 2007 as the article suggested yes but in today’s climate to put us on a par with Palace is a tad of the mark but I’m sure Paul knows that.

As for players always jumping at the chance to moving to United from Spurs, I disagree

As their very own Woodward has said United simply don’t have the cash, as hard as it is to accept with their decrepit stadium and average team it’s extremely plausible that the majority of professionals won’t view it as a step up in anything other than potential historical prestige at this moment in time.

United are a great club but it’s very unlikely given their current status that moving there would be a step up for any elite player.

I’m not saying we are any great shakes and the ENIC factor plus recent lack of trophies always plays large in this as it leads to the double barrelled presumption of lack of ambition plus being chokersbut times have changed, we have had a poor season by recent standards.

However if you want to win the premier league ( or a league of a comparative standard) or be champions of Europe, you won’t achieve that any time soon at United so unfortunately Paul you need to accept that and maybe concentrate on being number one in your own city and region before it being vaguly plausible that United can cherry pick unhealthy top players.
Raj THFC North London

Net ball
My mate’s a Liverpool fan and he never stops going on about how their net spend over the last five years is less than Bournemouth’s – and I do mean never: It comes up in every football conversation we have. But I’m willing to bet him that Liverpool’s net spend to regain Champions status is bigger than any other club in history. So does anyone know what their net spend is since they last won the league in 1990 before football was invented?
Snort, Saints

Replacing fans
Not having people in stadiums takes away the atmosphere, arguably makes the football worse, is creepy to listen to, and generally speaking is pretty terrible etc. etc.

But… if this is as good as its going to get for 6 months, what would make it better? Yeah most of these are gimmicks which would be pretty awful in normal circumstances, but surely some might help for now?

Everyone is mic-ed up, with the option to listen in live, or NFL-style edited and replayed
More commentators – 3 in the box + 2 pitch-side, the latter summarising Jamie Vardy calling everyone c***s
Play in small grounds (does no echoing sound better?)
More sideline cameras, lean into the park football vibe
Understated ambient noise piped in…
Elaborate tifos / banners / something in the stands (not more advertising…)
$ex dolls in the stands (not sure what the big deal was, they were all dressed appropriately)

There’s gotta be something that improves the soulless atmosphere that we’ve got to look forward to…
Simon, London

Show business
Bored as I am at the moment. Ive spent a few hours thinking of a few ideas for your isolation show.

A show where each of your writers discuss their favourite club. Favourite moment in football. Favourite world cup moment. Favourite player and so on

A show about forgotten players from the distant past. I love a bit of education about the guys my grandfather and his grandfather would’ve seen.

A what if show. Certain moments that could’ve changed football if they didn’t happen. I’m thinking Heysel, Munich air crash and so on

A show where you did one of your alphabet teams. Love that feature and I’d love to see one play out

A show that looked at young players who never quite made it. Why it didn’t happen for them and so on

Bebe, I love you
That was an exceptionally interesting article on Bebe from Matt Stead – I had forgotten all about his background, and it was interesting to understand a little more of the process that went on when he joined Utd. It further highlights the transience of sporting careers, which certainly seems like a prominent consideration in these precarious times…
James Jones, STFC