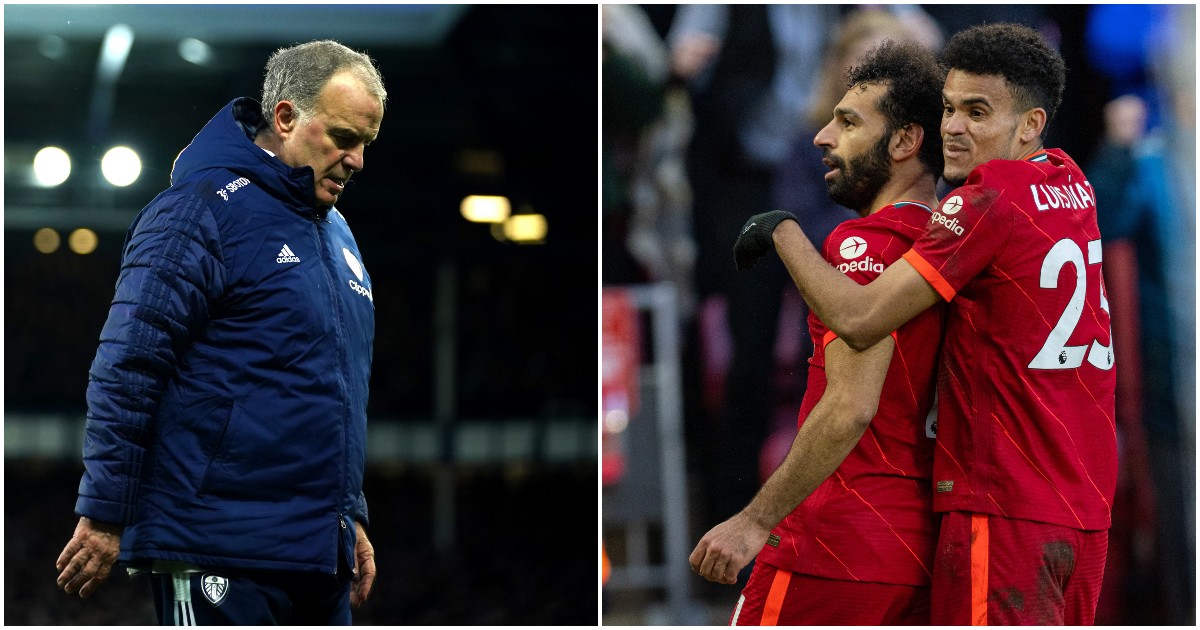 Liverpool have the Mo Salah contract situation all wrong and they should absolutely tie him down, while Leeds fans are starting to want more.

Their year
If it’s the hope that kills you I’m a dead man.
Aidan, Lfc (doesn’t mean I think it’ll happen)

Allow me to present the two likely scenarios playing in the head of the two camps vis-a-vis the title race:

Scenario 1: (The Liverpool fan) “And so it begins, the title belongs to us, it always has. Screw you, smug Lex Luthor with the oil money… What if we get the CL too?? Oh there’s the carbao cup at the weekend! Treble! Okay shhh, just keep calm, don’t wanna look like a fool if we get beaten by Watford again and sh*t the bed”

Scenario 2: (The Man city fan) “Nah… Just a blip… We’re going on an unbeaten run after this… Those pesky peasants think it’s going to be a race… Let me get that Pep-smoking cigar pic ready to share on the groups when we stroll to the title…. Wait is that ManU at home for us in the next couple of games… Sh*t”

Scenario 3: (Others) “Screw them both, who cares”

It’s just too uncertain to call it. Anyway, IF there’s a race to the title and we divide the camps into two, which fan base would want the title to Anfield or the Etihad.

In a part of Mumbai, I know the Arsenal folks have a soft corner for LFC and detest City.
Mihir Nair. Mumbai. LFC. (Things may not seem as obvious but you never know)

Sign da ting, Mo
Firstly I like FSG.. they made some mistakes but owned up to them and there’s no denying we are now one of the best run clubs in world football.

But I do have to ask if their unbreakable wage structure is sensible. For a long time players have treated anfield as the stepping stone to another club, even club trained players like owen did it. The reason back then was lack of success (probably also money).

In recent years we’ve done a superb job of showing players who leave that there isn’t always greener pastures and staying put is better for their career, Phil being a good example as is emre can. And slowly we’ve made ourselves a final destination again. I can’t help but think that many players will start to view us as a stepping stone again if they know we will never pay fair market value for top talent. A player of mbappe quality for example might sign for us but will always see us as a short term option until a “big club” comes calling and we’ll be back to replacing key players every two or three years.

In addition to this they’re viewing the Salah negotiations all wrong. They’re looking at a 29 year old player and thinking a 5 year contract is the wrong decision as many players decline significantly after 30. But Salah doesn’t drink. He takes care of himself, has been injured just once and seems to have the same pace and stamina he had at 24. His decline is unlikely to be as a pronounced as some others.

There are some rare players who live super clean who play at the top level well into their late 30s, maldini, cafu, McAllister, Ronaldo, ibrahimovic, just to name a few. No reason to think Salah wouldn’t be one of those, in which case tying him to a contract for another 4 years would probably still get the best years of his career and would mean we only need to replace 2 of the front 3.

Give him the contract. He’s definitely earned it by now, he’s hit 20 goals every year and double figures in assists too.
Lee

I agree with arsenal fans – it’s the inconsistency of the decision making that grates football fans.
Tom, leeds fan in Newcastle.

I’ve since calmed down and had a chance to think. Overall, no doubt that man utd deserved the win – gaining a lead and regaining it through greater quality and composure.

However, my main concern is with Leeds. Have we been “found out”, should we have strengthened in January and have we been unlucky with injuries? Yes to all three. With that in mind, a change in squad size and tactics should have been enforced as soon as we started struggling last year.

I love marcelo bielsa.  What he has done for leeds has been tremendous (a lesser version of keegan at Newcastle) and like many other fans, I don’t want him sacked. I love that we have a manager discussed in revered tones amongst some of the game’s best managers.

However, i’m sure im not alone in wanting more pragmatism and a desire to have a bigger squad (or trust more of our youngsters with more games). He will be backed so the question is does he want to buy more/better players or change tactics or is he so fixed that he won’t change?

El Loco is and will always be a legend in Leeds. Its whether he thinks this team can be pushed further and whether he can adapt – if not we need to be thinking long term as I for one don’t want another season like this again given our long time away from the top flight.
Tom, leeds fan in Newcastle

Bielsa reassured by the fight today but said it's not the only thing Leeds need to get out of trouble. Very aware that the amount of goals they're conceding is a worry.

Raphinha was on the bench for tactical reasons. Koch substituted because of the cut, rather than concussion.

Equality and VAR
Hopefully after that second Leeds goal we can all agree that VAR is truly egalitarian in its general awfulness.
Niraj (conditions making this old school fun!!) Tampa

Marc of the man
Who would have thought? You have a better chance to win when you play with 11 men rather than 10 men!

Lingard & Elanga have proved that they deservably need to start ahead of MBE Rashford Dr Lazy whenever they are available.

If Rashford doesn’t sort himself out, it won’t be long before he turns out on the sub bench for the likes of Southampton (to play or warm the bench with Walcott), Everton or Burnley.

Official line
I’ve seen a few references to Arsenal getting unfair decisions against them and I actually kind of agree. The red card last week, the penalty this week and a few others..it’s too weird.

Has anyone considered that it’s happening because the officials just don’t like your players/manager? I’ve always thought the English bias thing is probably because English players can have a bit of banter with refs and be a bit more matey with them and as a result they get away with a few bits. I’m sure I recall Terry or someone like that saying that he’d give signed shirts to refs etc to carry favour?

I honestly don’t want to think that it’s some kind of corruption (although did anyone see Craig Pawson’s reaction on the sideline when Spurs scored that winner? Go watch the video showing Pep and Conte…it’s pretty weird) but I do think referees are human like the rest of us and thus more likely to let certain things go when their pals are involved or when they severely dislike someone.

It reminds me of Klopp’s first season when he criticised the referees and for the next three months we got every kind of dreadful decision against us. The PGMOL have their methods of ensuring that nobody pays too much attention to the fact they’re a racket of pretty poor quality officials.
Minty, LFC

Spurred on
As I read the Mailbox headline ‘Spurs will challenge for the Premier League title next season’, I thought that only one person would be so deluded as to write in with this conclusion from a single performance whilst simultaneously failing to extrapolate any perspective from the Spurs defeats that preceded it.

And there he was, everyone’s favourite boggle-eyed KoolAid (poured bottom up, faster than anyone else ever, naturally) drinking Spurs cheerleader, Barry “Hyperbole” Fox. I’ll leave someone else to deconstruct his email, as when you argue with an idiot they bring you down to their level and then beat you with their experience.
Matt D, London

As soon as I saw the title of the Sunday Mailbox about Spurs challenging for the title I knew it was a Barry Fox missive leading the way.

These letters are the reason we are laughed at mate. Just enjoy the moment before it abruptly ends, like usual.
Jon, Lincoln

I’ve discovered a new game predicting the author of letter in the mailbox before getting to the bottom of the email.

If it is an interesting piece on Crystal Palace I know it from an author whose surname I’ve still not worked out how to pronounce.

If it is a fresh piece on Liverpool then I know who it is.

If the contributor predicts Spurs are about to take over the world I won’t be foxed for long.

Spurs won a football game against a team playing to their strengths, after losing the previous 3 league games. Bit of perspective needed.

As a spurs fan with Brentford leanings I would like to disagree with an arsenal fan, but I can’t see why both incidents aren’t penalties. Var will never get rid of the human factor.
Paulo (next year does not end in a 1)

What a season
Can we all just pause to appreciate what a great season this is turning out to be? For a while it looked like the top 4, the title race and the relegation battle would be highly predictable. But no longer. With a third of the season to go, everything is alive.

Saturday means that the title race is firmly back on. City are still overwhelming favourites (they’re ahead, and play Liverpool at home) but at least we have a race. If Liverpool beat Leeds on Wednesday, they’ll close the gap to just 3 points. It’s very much all to play for.

The relegation battle also surely has twists and turns ahead. There are only 7 points between Norwich in 20th and Brentford in 14th. And, all the teams below Brentford have played fewer games than the Bees. There’s the possibility of some massive clubs, like Newcastle or Everton getting relegated.

Maybe even more exciting is the Champions League battle. All the teams from 8th-4th are in with a shout, and once the games in hand are played, things could be incredibly tight. There’s the prospect of Champions League football for Wolves or West Ham or the return of the Champions League for the north Londin clubs. And I’m sure there would be a few chuckles all round if a Ronaldo led Man United failed to finish in the top 4.

All in all, it’s exciting stuff and I can’t wait to see how the end of the season plays out. This is why we love football.
Mike, LFC, London