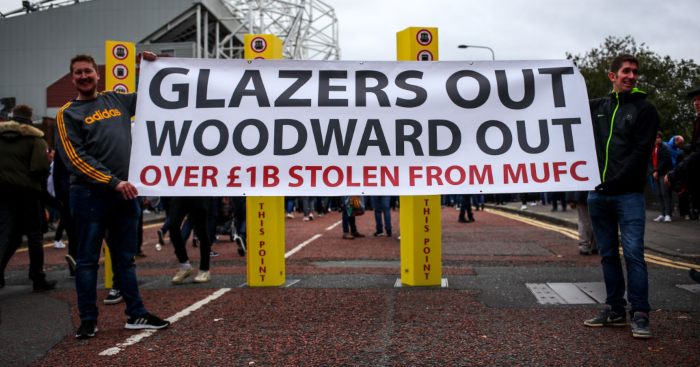 Thank you for your mails. As ever. Send more on Man Utd, Neymar, Pep Guardiola or anything else to theeditor@football365.com

Heads up Fraudiola
Yo pep, just a quick heads up. You might not have heard, but Flick has done what you were trying to do for 3 years at bayern in 10 months! Quick sign someone and change the narrative so they don’t notice.
Imy_c (best fan in the world™)

They are not going to let Woodward offer his customary two Chupa Chups for another.

If the stories about Joel Glazer vetoing the signing of Sancho are accurate then I cannot for the life of me understand why United fans aren’t burning the Glazers in effigy, in the Glazers living rooms. This is a generational talent, 20, proven, English and willing to sign. In footballing terms it was such a sensible purchase.

But United aren’t a business run to play football any more. They’re a football club run to support a business.

I don’t understand why United fans aren’t attacking the Glazers constantly anyway. Hundreds of millions siphoned off a year, an also ran team for a decade, a manager whose only qualification was already owning a club necktie and a decaying stadium and training ground despite being one of the richest sporting teams in the world.

Sancho not going to United is a symptom of a very sick club from top to bottom.

Chris Samba – QPR paid £12.5m for the defender to Anzhi, 100k a week, added nothing to the QPR defence, QPR relegated, but at least they got their transfer money back that summer, still paid out those huge wages for, well, nothing much.

Dani Osvaldo – Southampton paid a club record £15M for Dani, In 13 games he scored 3 goals, got fined £40,000, banned for three matches and was suspended for two weeks after instigating a training ground fight with teammate Jose Fonte.

Denilson – Real Betis paid a world record fee of £21.4m for him back in 1998, according to Twitter it is 22 years to the day today, apparently with inflation that fee would be £45m in today’s money, I could go into detail but you know his story, he did lift the Copa Del Rey whilst in Spain, but a world record fee? Madness.

Absolutely not having this slating of Neymar.

He’s 28, theoretically getting into his prime now. He has over 100 caps for Brazil, and looks a sure thing to become their all time top scorer, in a more competitive than ever era.

Yeah he cost a ton and plays in France, who people may use to diminish his value for money or whatever, but it does nothing to his quality.

He has a goal or an assist per game in the champions league through his whole career, and is 5th on the all time assists, having played about half (or fewer) as many games as those above him. He’s a superbly creative and innovative player. Yeah he did lots of flicks, because when you have that midfield, against that midfield as was the case last night, you’re going to need something special. There is no shame on not beating Bayern solo.

Hopefully he can have a few injury free seasons and we can again see the player with the quality to challenge Messi and Ronaldo.
KC (in no way affiliated, LFC in fact)

I consider myself a Neymar apologist, I think he gets attacked way to much and people just seem to want to hate him. That said, when you are Neymar, and get to a final, you have to make an impact.  You just have to. The stage is set for the brightest of stars to shine, and more often than not, the shine. Ronaldo, Messi, Ramos and many more shine at the finals. This could be a stepping stone for PSG, making a final before Man City, they could use this as motivation to go for the jugular.

That said, Neymar was absent in that final. I was hoping he would deliver, and looking at the scoreline, he should be standing out. If Bayern win 5-2, with Neymar scoring a goal, I would rest easy, but to just shrink and barely register a mention, other than the negative ones, puts him below the likes of Ronaldo and Messi. Brilliant footballer, but he has failed too many times when it really matters to be considered a football great. He is also getting older so he is not helping his cause. I think once he retires, he will very easily be forgotten and I suspect most football writers already dislike him enough to not even engage with him.
Dave(a sad ending to a promising career), Somewhere

Mbappe not good enough?
So after Mbappe missed two sitters in last night’s final does Jamie O’Hara think this now make him not good enough to lead the line for PSG or does this only correlate to Anthony Martial? Seems to me no matter how good you are sometimes it just doesn’t happen for you on the night. On to the question F365 asked this week regarding Neymar, last night showed exactly why a lot of fans don’t like him, the play acting the squealing like he’s been stabbed when not even touched the arrogance asking for cards at every opportunity and the playing for himself and not for the team, he may be talented but he ain’t great. Well done Bayern a well deserved win.

Lastly as a United fan constantly hearing about letting Lukaku go was a mistake, watch the Europa final and tell me again what we are missing?
Paul Murphy, Manchester

Okay choked my be an over analysis, I’m not a psychologist after all, but from what I saw last night Mbappe is as much to blame if not more than Neymar.

After the first 15 minutes i dont recall Mbappe having a positive effect on the game. I do recall him passing Herrera when you would expect a  player of his calibre to hit it after creating that space and then he hits the return pass lamely at Neuer. Huge moment.

Whilst Neymar may not have lived up to his price tag, it was Mbappe who had the best chance to deliver that CL to PSG last night.
Dale Leeds

Oh, Aleksander…
It’s good to see UEFA President Aleksander Ceferin is still in touch with the game.  His suggestion  that the Champions League may in future have one-leg quarter and semi finals because, “[this year we had] more exciting matches for sure” amused me.

My memory may be distorted by time but didn’t last year include Man City v Spurs,  Liverpool v Barcelona and Ajax v Spurs.  Three of the most exciting games I’ve ever seen.
Rob