Home Mailbox An explanation for Maguire’s struggles, and other mails… 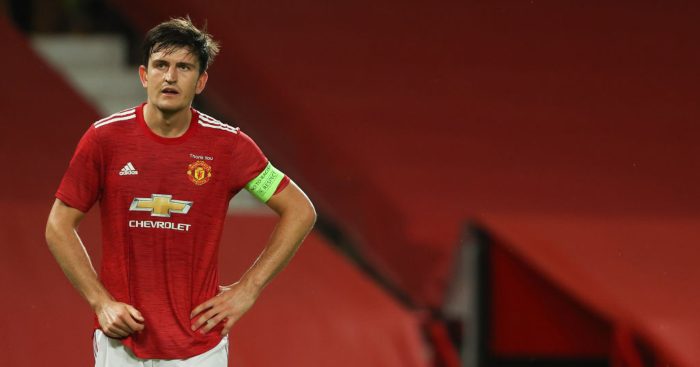 Keep you mails coming to theeditor@football365.com…

Maguire was never the right fit

For all the Maguire bashing in recent mailboxes, I think his performances illustrate another fairly obvious issue in player recruitment. Players can look good based on the system they play in and what they are being asked to do.

If your defense is going to sit deep, defend crosses, and condense the play then a bigger, slower player can make all the sense in the world. Consistently being successful in that role builds confidence.

Asking that player to play that role against some opponents, but against others to push up in a higher line and defend quick counters makes little sense. I think Maguire’s mixed performances over the last year reflect his attributes not being suited to the tactics his team adopt in certain games and poor performances affecting his confidence.

Maybe I’m wrong, but I didn’t understand why he was the right defender for them at the time. It makes sense why Mourinho wanted him, but after they made the transition to Solskjaer it seemed less of a fit. He didn’t seem to have the right qualities for the way Utd need to play against the teams that will sit back and try to counter attack against them. But at Leicester the tactics suited his attributes well and he performed consistently at a high level.

Anyway, my only point is players can look terrible for many reasons. Sometimes they are actually terrible and sometimes the manager has asked them to play in a way they are not suited. The latter could be because the other options are worse or the coach isn’t very bright.

Curse of the Greek Gods

Why surprised?!
The moment I read Harry Maguire had shouted “F*** the Greek Civilization!” … in Greece! … I knew his form will go south faster than a flock of geese.
Rado, Sofia

Sarah’s piece on squad depth was interesting as ever but there are two big points I took issue with. First was that United have a squad that ‘should fit comfortably in the top 4’. Having internationals that don’t make their second XI is irrelevant when there isn’t a single name in the first or second choice back 4 or holding midfield roles that you definitely know is top 4 worthy. This isn’t an overreaction to the Spurs game, it’s just a fact.

Secondly, as a spurs fan I’m getting pretty bored of the constant digs at Eric Dier. He’s been a full time centre half for 12 PL games so far, and generally has been excellent. Sure we’ve conceded some goals where he could have done better, but actually when you look most of these were half chances buried by high quality finishes like the goals by Calvert-Lewin or Ings (Or nonsensical handballs but that’s another issue) Sometimes good players score good goals, but most times a CB would not concede one goal from giving up those chances never mind two. He’s been good and should improve as he plays the position more. I honestly don’t understand how a line by line comparison of United and Spurs’ squads would conclude the former are the better bets for the top 4.

Read: Which big six side has the strongest squad

Isn’t the Utd issue easy?
The Glazers patsy is Woodward
Woodwards patsy is Ole
Ole’s patsy is Shaw or Fred or Matic or Lindelof or……
You get the idea.

“United either didn’t want to or couldn’t do the deal on Dortmund’s terms, and then spent two months playing a poker game against somebody who wasn’t even at the table”

Hmmmm, this definitely isn’t an obvious analogy for another British / European negotiation…

Seeing as my last email provoked some replies, and I have some time, I thought I’d clear up a couple of things.

First, Murtaza (MUFC (no surprises there!)) does what all Man U fans are doing here and grasps completely the wrong end of the stick. Or, perhaps more accurately, doesn’t event grasp the correct stick at all. Without much thought he launches straight into stats as to how much “we (he means Man U on the Glazers’ behalf) have spent on financing debt”. He also blithely states that Arsenal fans tend to complain about lack of investment from the owners rather than our owners taking money out of Arsenal. Let me assure you that Kroenke does take money out of Arsenal and fans do complain about that. But, none of this really matters. When Glazer purchased the club it was a listed entity (and by the way Man U did extremely well out of it being listed – it originally helped it establish its current economic position). Murtaza could have bought it. I could have bought it. You, dear reader, could have bought it. If we had enough cash or the business ability to put that deal together. My point is this – if we as fans have an almost irrational affection for a company listed on the stock exchange that is not the problem of anyone who buys it. To them it is likely to be an asset. They didn’t spend £800m on Man U to make you happy. I understand why you want your football club to succeed. Because I want mine to succeed. But it is irrational and stupid. It is akin to being a fanboy of Amazon and complaining that Jeff Bezos makes a mint every year. It does not make sense. And no amount of complaining that some bloke is richer than you and bought “your club” (it’s not your club. At best you pay through the nose to be allowed onto its land) will change that. So, give those complaints a rest.

Second, Rob A, AFC falls into two very modern errors in his first sentence. He is desperate to say something so we are cast into opposition and, in order for his email to have a point, he constructs a straw man based very loosely on what I was saying. And not what I actually said. He does this in his first sentence so the rest of his patter has something to hang from. Sorry – where did I say it was ‘easy’ to get a transfer done in this market? My email does not contain the word ‘easy’ anywhere. I’m fully aware that shifting Ozil is close to impossible. Though apparently we did come close a few months ago. So it may not be totally impossible. I described Ozil as the ‘elephant in the room’. And he is. It’s bloody awkward for all concerned that we have a world cup winning superstar loitering around the training pitches on 350k a week whilst not even making the bench. As to our defenders, Sokratis wants out and previously said that he will do what is needed to go somewhere and play. Chambers and Saliba have both gone on loan before. It doesn’t seem beyond the realm of fantasy to think that we might have found deals for them. In any event, again, none of this really matters. The point of my email was to review our transfer activity and question whether we had the fantastic window everyone seems to be saying. I discussed it because we have another new management structure and thought it would be relevant to see how they are doing. As before, I am cautiously optimistic, but my conclusion was that some situations were not resolved or maybe could have been better handled. I think this is true but it has nothing to do with the ‘ease’ of operation of the current market.

If you want a real conclusion to pick at I will put my knackers on the line and say that this transfer window has committed us to mainly this team and squad for the next two years under Arteta and gambles on us making the CL at the end of that two year cycle. Failure to do so will see us in a bit of a mess come year 3. Now that statement you can have a pop at!

So recently you may have seen in he news that Mo Salah stepped in at a petrol station to stop a group from abusing a homeless man, this homeless man told media that “He heard what a group of lads were saying to me, then turned to them and said, ‘That could be you in a few years’. I only knew I wasn’t hallucinating when Mo incredibly handed me £100.”

First of all, what an incredible thing to do, lovely gesture too, many may say “but he can afford to” , that isn’t the point, just because he can, doesn’t mean he has to, but he chose to, which deserves praise, now we all know about Marcus Rashford’s good deeds in recent months, but I thought to bring some warmth and positivity to the mailbox I’d ask writers and readers alike to share their stories about footballers who have done good deeds and what they were!

Mikey, CFC (Hatem Ben Arfa signed with Bordeaux, another free agent off the board)

Here’s the petition to get fans back in grounds.

Obviously health and safety are paramount, but if it is determined that fans can begin to return responsibly in limited numbers, Parliament should require that clubs do not increase their average ticket price vs pre-pandemic prices. Otherwise, some clubs (including mine, obviously) will set prices that only their wealthiest supporters will be willing to pay.

Danilo Warner (Mailbox Wednesday) suggested that if Conor Byrne (of blessed memory) were ever to return, he should skydive into Villa Park.

I can confidently state that NO Villa fan (or anyone else for that matter) would ever enter VP in that fashion. Especially when the last person to do that (dressed as Santa) landed on (and then fell) off the Trinity Road Stand roof. After breaking both legs, an arm and his pelvis – he survived – sadly losing his lower left leg.

Classic denouement – he married one of the nurses who had nursed him back to health – and he became a tireless fundraiser for limbless veterans. His name – Nigel Rogoff.

Steve (AVFC) USA – hope not too many brackets !!