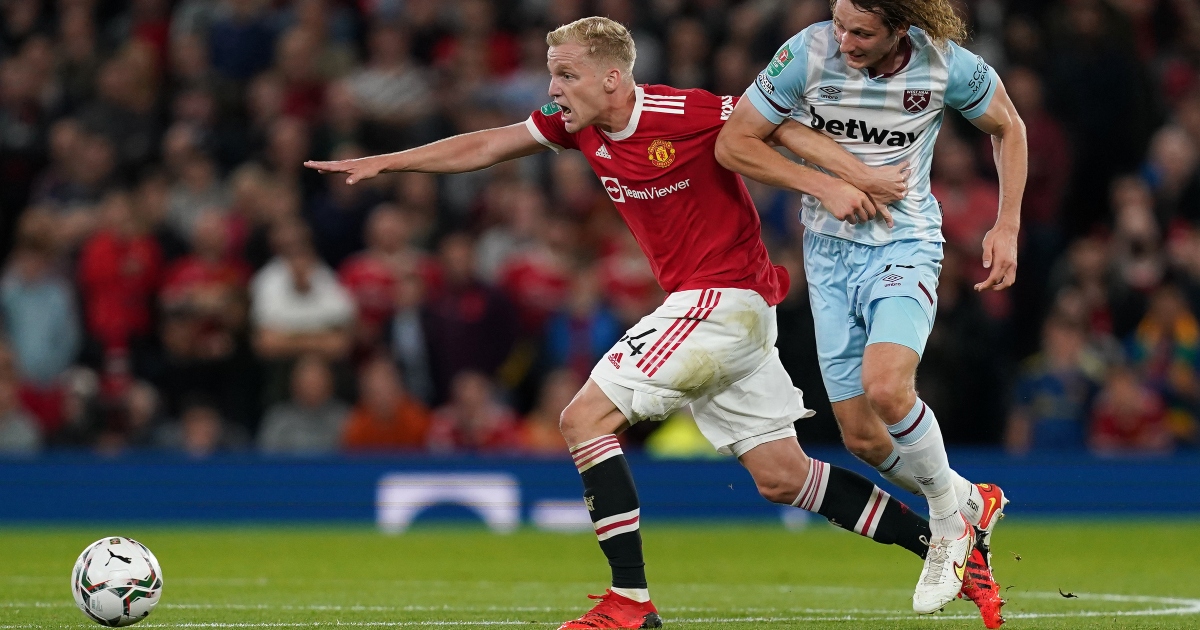 How do Man Utd solve their Donny van de Beek conundrum? The Mailbox is clearer on what they must do with Anthony Martial…

Get your views in to theeditor@football365.com in time for the afternoon Mailbox…

Free Donny
Donny Van De Beek is a phenomenal football player, he will be a credit to any team he’s a part of – his interview with Rio on Vibe with Five shows what a great character he is.

But he’s simply not a defensive midfielder. West Ham saw that and they bullied him into losing the ball multiple times. He’s good enough to make a pass from anywhere but he’s simply not going to regularly launch Hollywood through balls. He’s more of a pass and run player, which he does all the time but rarely gets the ball back when he does.

A team of 11 DVBs would be a great team but in this United team he’s a Mac program turning to run in Windows; the software isn’t bad, its just not compatible.

His best position is as a second striker, and he will never play there at Manchester United. It’s time we tell Donny, we love you but we have to let you go.
Shehzad Ghias, MUFC, Karachi (Bad night all round – cup runs are essential to keep a squad as big as ours happy)

DVB and Tony M
The Carabao Cup offers a chance to see your squad players in action which I really enjoy. I’m not that happy for Man Utd to be out at the first hurdle, especially given you only need to win about 2 games to get to the semis but ultimately the competition is just a b-team cup run that ends whenever you draw Man City.

Well done Hammers though, a hard fought win for them. Noble, however, needs the last 2 letters removed from his surname.

I was quite interested in a couple of players in Utds starting line up who gave more insight to their troubles, namely Tony and Donny.

Martial undoubtedly has talent. He’s just so bloody lazy. I remember at school we had a player that if your pass to him was a bit misguided but he could have stretched to get onto it, he’d rather stop in his tracks to highlight the error of your pass. That is Martial. Give him the ball on a plate in and around the box and he’ll try and do something with it. Other than that, he’s just not interested. I’d love to see his distance covered against other players and even Ronaldo who the narrative is that he is playing more efficiently. I’d guess that Martial covers less ground than Ronaldo plus he also scores goals. Martial really does seem to be surplus to requirements and not the type of player utd need. He should not get in the first team right now and we still have Rashford and Cavani to come back in. With his talent, he could be a superstar at another club, Everton, Villa, West Ham maybe. Who knows and frankly I don’t care, we just need to get rid and not look to get back what we spent on him. Just get him off the payroll and away from the squad.

I spent a lot of the game watching Donny. I admit I have a soft spot for Donny, I can see his talent and his effort so it was pleasing to see him make some good touches, good passes and good interceptions…..only to be let down 5 mins later with losing possession when he really shouldn’t have. However, I think I see his problem now and it is exactly the same as Fred had when he joined. Fred struggled with the pace of the league, not always being able to take a touch and teams started to target him as he was a weak link. It looks like Donny has the same problem. He has a great first touch, good eye for a pass but there were a couple of occasions where he lost the ball because he took a touch when he needed to play it first time and a player was already on top of him. Fred came right, I’m sure Donny will too. Not sure anyone will ever get the time Fred had though. Donny looks to be more talented than Fred and while Fred may be close to his ceiling, I can see that Donny has a lot more strings to his bow and can reach the level utd need in midfield. I’ve mentioned McDonny as a double pivot before and tonight showed me that if Donny can learn when to get rid of the ball first time to cut out the lost possession then that pivot will be stronger defensively than McFred as well as having more going forward.

Out of the rest on show, I thought they collectively played better than utd b-teams often do but were all still a bit meh. Telles and Dalot had good moments but way too many bad moments. They both seemed too keen to contribute to attacking play and not interested enough on stopping the Hammers counters that should have put a bit of gloss on the scoreline for them. The best defenders we’ve ever had, Vidic, Rio, Stam, and the best defenders in the world (mostly Italian) covet a clean sheet like a striker covets a goal. World class defenders despise a conceded goal like an average defender despises an own goal. World class defenders need to be like that. Utd lack that across the whole squad – when they concede a goal all the heads drop, they don’t know where to look. When Schmeichel player for utd and we conceded a goal he made sure the defenders knew it was not OK – someone needs to show some pashun. Shouting has a place in sport.

Many of these players on show will be reduced to bit parts from the bench unless utd draw some minnows in the Uefa cup (hopefully not). Maybe it’s good for them to not have the Carabo Cup any more. If they want playing time now, they need to do much more.
Jon, Cape Town

Ole doesn’t learn
Ole Gunnar Solskjaer continues to make the same mistakes and is not learning from the past. I have always supported him but I have serious doubts now. It is becoming increasingly clear to me that Ole is not learning from his team selection and tactical errors. Resting key players and giving playing time to 2nd and. 3rd tier players has always been a recipe for disaster for OGS. Every time he has given these non regular 1st team players a chance, they had failed. It cost us the UCL last season when we lost in Turkey, the FA cup loss to Leicester etc. These players complain and make noise but, when given the chance, they fail woefully. Frankly, I don’t know if or when Ole will ever learn to field his best players for every match unless they show signs of fatigue, illness, injury or loss of form. If Ole does not learn and change and/or if he allows his pride and desire to prove his point overshadow commonsense, the Ole Out shouts will only grow louder and he will eventually be sacked.
Professor (Dr) David Achanfuo Yeboah

After Ole?
Here’s a change, cut your losses and get in Ten Hag, his Ajax side have been doing well for years, the football looks great, the players don’t look clueless in the final third, and I’m sure he actually fancies playing VDB over Fred. I’m not just saying this as a reactionary statement because of last night’s result (fair play VDB actually got to play and he showed why he should be starting over Fred) , but honestly Ole just doesn’t look to be that guy.

Here’s something else which has been a key characteristic since Ole joined, why is it rarely we are on the front foot from the start of the game, why does it take an opposition goal to suddenly wake us up?

Let’s be honest here, we basically landed Pochettino without hiring Pochettino. I’m sure this Man Utd stint has raised his profile so there’s probably some mid table/lower league teams that can give him a go. But for me I’ve been Ole Out since that final loss to a club that finished 7th in La Liga. This should be his last season tbh.

Chelsea act more like a Big Club than an emotional one, sure Lampard was lucky to survive a few more months but in the end it just didn’t work out and they did away with him, and what was their reward? One of the best managers in the world and a UCL (They are not winning that final if Lampard even reached it btw).

The league cup is never a priority realistically for a top six side anymore especially considering the small amount of prize money you do indeed receive from lifting the trophy, £100,000 was the amount last season, compared to other trophy prize money you can see why managers rotate so heavily from these sides.

Anyway, it gives fringe players a huge opportunity and from the eyesight test last night players like Loftus-Cheek showed their ability, the midfielder especially showed myself with the eyesight test how he is able to get rid of the opponent, reminding me a lot of Kovacic, Reece James with a penalty that was what many call unstoppable, Ben Chilwell and Callum Hudson-Odoi didn’t really have games to remember sadly.

Final word goes to Kepa, he may never show he was worth the world record fee for a keeper but right now he has shown he has talent and can showcase it when called upon, another win in a penalty shootout, another solid performance in between the sticks and I’d argue another player whose career has taken a huge turnaround under Tuchel.
The Admin @ At The Bridge Pod

Unpopular predictions
– Bruce keeps Newcastle up. Club still not sold and toon remain stuck in this Ashley-Bruce Groundhog day until at least 2023.
– Brighton and Brentford to finish top 8
– Salah to finish top scorer over Ronaldo
– Pep walks end of season
– Leeds will be in a relegation battle
– No Spurs or Arsenal in top 6
– No Man City in top 2
– Man Utd will have a new manager by the start of next season
Banjo Alfred, Lagos