Home Mailbox Have we all f***ed up over Fred? And other mails… 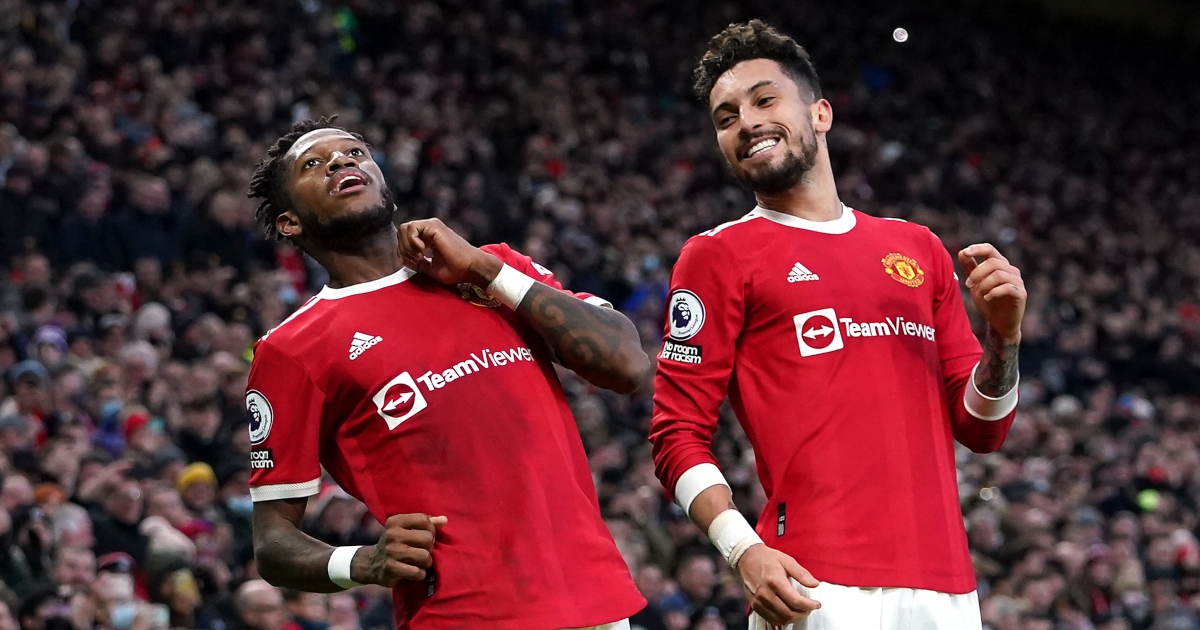 The Mailbox offers some first impressions of Ralfball at Man Utd, while Everton have sacked the wrong man. Get your thoughts in to theeditor@football365.com…

Relief and hope
Relief. That’s what I felt at full time. All this team needs is proper instructions. Seems like they might finally get it.

Good luck, Ralf. And welcome to the theatre of dreams.
Kay (Cautiously hopeful)

…Man City, Liverpool and Chelsea are lightyears ahead of everyone else in the league.

4th is realistically the best that United can hope for this season. We are 3 points behind West Ham with 23 games to go (4 points behind Spurs if they win their game in hand and move into 4th).

Top 4 is still very much alive. Top 4 and the FA Cup would be a phenomenal achievement for Ralf to be honest. Let’s not even pretend that a Harry Maguire led defence can win a Champions League!

There will probably be a few crazy results while the team gets used to the new system, and I imagine a few hamstrings will go crash, bang, wallop when these lads are actually forced to work for a living, but even after one training session, you can tell that things will be different.

We’ve all known for a long time that Ole wasn’t going to get us to the next level.

No one knows really what will happen under Ralf, which is exciting in its own way. The next 6 or 7 games are eminently winnable, Fred has remembered that he’s Brazilian, we have people pressing and passing between the lines, all good things. That cruel mistress called hope has returned!
James, MUFC

First impressions
So that’s the first look at United under Ralph, on the backend of one whole training session. Even though it’s important to not to get too carried away, it must have been some training session.

United were a different team. Hard-working, hard pressing, a defined style of play in an attacking formation. Almost likes it makes a difference having a proper manager in place rather than a feel good mascot. Who’d have thought?

This team still wouldn’t have beaten City or us, but they’d have been a damn sight less embarrassing. Obviously United tailed off in the second half, but they’re simply not used to working that hard. They’ll get fitter. Apart from Ronaldo, there’s not much more than this that you can get out of his 36 yr old body.

Surprisingly, Fred was the best player on the pitch and very much deserved his goal. Having a manager who utilises him properly will turn him into the guy they spent £47 odd million pounds on rather than the figure of fun he’s been for a while.

Much as I enjoyed Ole at the wheel, from a rather more dispassionate perspective it was still bloody perplexing watching the United board keep faith in him so long. If you’re going to spend half a billion pounds on a squad, surely you want someone who knows what to do with it? He got the job on the basis of being a United legend and more importantly not being Jose Mourinho. Any bog standard fool can see that isn’t quite enough, apart from the absolute complete fools running the club.

The problems at United always ran deeper than the manager and quite a few of them are still in situ. There are many more baffling decisions to come, but hiring Ralf looks good on a initial basis at least.

It was only a 1-0 win against Crystal Palace though, so it’s not like football just got reinvented and elevated to a higher plain. But this was an actual working team with an actual plan, actually trying to execute it.

Interestingly for people who thought Ronaldo was not terribly compatible with Rangnick – me being one – he was the focal point of everything they did. Less isolated than under Ole, he worked hard and probably should have scored. Obviously he’s not the player he was, but as Pep said, the hardest thing in football is scoring goals and no one has ever done that better than Ronaldo. You’d always be ill advised to write him off.

People are going to draw way too many conclusions from one game, myself included, but I suspected as a Liverpool fan that we might not enjoy this appointment.

And early signs, unfortunately, are that we won’t.
James, Liverpool

Have we all f***ed up over Fred?
Is… Is Fred actually a decent no. 8 who has been stuck playing at no. 6 for 3 years?? Given Guardiola was interested in him, I have always quietly wondered if he might make a decent midfielder with a proper manager.
Jamie

…Firstly, because I’ve often criticised Fred, I want to start by saying how well Fred has been playing since the Villareal game. I don’t think he’s good enough to be starting for Man Utd, but maybe with better coaching he could be a good player for us.

Secondly, I’m glad Dalot is getting a run in the team. I think the last two games have shown how much more of an asset he is to the team in attack, and I don’t think he’s so much worse in defence that it justifies starting Wan-Bissaka. Maybe with a new coaching team Wan-Bissaka might push on, but it’s good to have options.

Mostly, I’m just glad we might be competently managed for a while.
Daniel, Cambridge

Zoom out your perspective
For the first time in a while, watching United made me feel happy. Our performance was far from perfect and I was quite nervous at the end there. But before we scored, something in bones kept insisting that our goal was coming. Somehow it was coming.

It wasn’t my bones, it was the optimism in my brain and I credit Mr. Rangnick for that. One training session mainly with players who didn’t play against Arsenal, forty-five minutes with everyone together, and video analysis and group meetings is all the input the man had. We were far from perfect, but the difference between our team today versus 72 hours ago was distinct.

Yes, it was just against an out of form Palace who were missing a few players. But a coordinated press was on display. A raw version of it, but it was there in its nascent form for all to see. The stats back it up. The collective effort and the instruction behind it all was clear to see. That’s what made me happy. We almost lost the game, and honestly I would still be happier than that Chelsea draw. We showed fight and sacrifice beyond just lip service.

And it wasn’t even THAT good! Have you seen Liverpool press? Amazing. City? Amazing. I won’t begrudge you rival fans that. But we’re trying to catch up and there’s finally a smart conductor behind it all. I honestly think all the hate and criticism from rival fans in the comments sections of this website and elsewhere is genuinely a result of fear at what may come. We’ve barely practiced Ralf’s systems and we were better. The press will get better, it will take pressure off the defense, and that confidence will show in our attack even more. That’s why Liverpool are great. They’ve spent years developing that.

Back to the title of my email. You rival fans need to maintain some dignity. RoNaLdO dOeSn’T pReSs! Okay bro, whatever. UnItEd WeRe JuSt As BaD aS bEfOrE! No one gives a s*** about your nonsense. I’m not blind and I’m happy with what I saw. We’re going to lose games. It’s okay. The sacrifice of the team and the guidance of the coaches is all I want. It makes me proud. You win some and you lose some, but this is the start of something respectable.

Zoom out your perspectives. You’re a f****** consumer claiming happiness at the success of people you don’t know. Just like me, just like everyone else. I’ll begrudgingly admit that I can be happy that Pool won the title. You deserve some happiness, too. So does everyone. Immature, desperate to trigger lies aren’t necessary. ThIs Is ReVeNgE fOr YeArS oF iNsUfFeRaBlE uTd FaNs. Congrats, then, you’ve become the scum you used to hate. Get a grip.
AR

Everton sacrificed the wrong man
Once again Everton misjudge the necessity of action to rectify our situation, and put a sacrifice on the altar to placate the fans. Marcel Brands was by no means the only issue we face, but the messy recruitment made him an easy target for fans’ ire. I think that he was never really allowed to stamp his influence and had to deal with the club making signings to try and present us on the world stage (James) or because the manager overruled him (Townsend). Both aren’t hugely positive for a DoF to put up with, but ending up hamstrung in terms of money to spend complicates that situation even further.

Brands certainly made an attempt at the role, but ultimately it was never clearly defined what he actually did, which hasn’t helped. Coming off the back of the utter car crash that was Steve Walsh, Brands’ recruitment was far more positive, but Kean was a disaster (although good on paper), and Iwobi has been a shambles. Ultimately failing to plan ahead (especially in the striker department) has cost him his job.

Everton fans planning to walk out on 27 minutes (to mark the years since we’ve won a trophy) in protest tomorrow won’t be placated by this. Neither will fans who see the problems at a much more simple level – Rafa is the wrong fit. This sacking doesn’t please anyone and makes our problems a little different. We’re now ceding Brands’ role to a mixture of staff who are equally culpable for our failures. Either that or we hire a new DoF and the cycle starts again. Real, systemic change, and open lines of communication between chairman and fans is what we’re demanding, and we want to know how Farhad Moshiri is going to deliver it for us. I believe we’re at a crossroads here, we either start operating sensibly or we continue thinking that every time the fans bay for blood a couple of sackings will temper things down a bit. It won’t and it can’t. We demand better.
Joe M, EFC
(PS, Brands will get another job and smash it)

Divock’s boss
Given that Origi has clearly become Liverpool’s greatest impact sub, should Kopites be worried that one day, similar to another great impact sub, he’ll be made Liverpool manager in a wave of foolish sentimentalism only to turn out to be a complete journeyman in the dugout?
Oliver

…Divock Origi has made 3 appearances in the league this season, playing 38 minutes, and scoring twice.
Is he a good footballer? Should he get more time? I’m confused.
KC

Gerrard acing it
Safe to say that Stevie G is doing better than I expected him to. Keep it up.

All this with limited impact from the Grealish replacements (Buendia, Ings and Bailey).
Paul