Home Mailbox Man Utd thriving in spite of Solskjaer, and other mails… 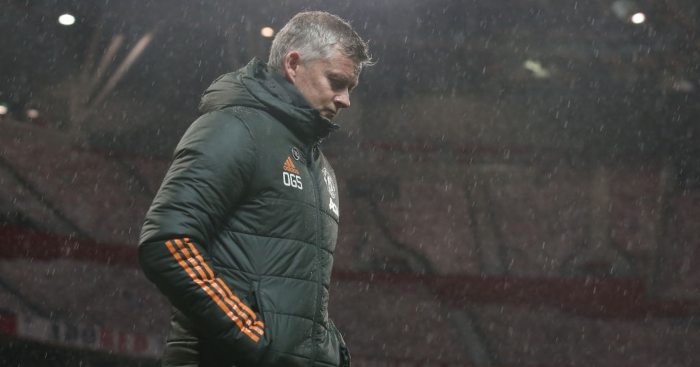 Still #Oleout
I will admit that the way Man U have been playing the last couple of months has got me exciting. No, I don’t think we’ll win the league but I’ll be happy if this year we can solidify our position as the best of the rest. The best being Liverpool and Man City. I know we finished 3rd last season as well so it won’t be a step up but win Europa League (not lose in the semi-final) and/or FA Cup and I think that’s as far as Solskjaer can take this team.

I want him to succeed. But the reality is that he’s learning on the job. While he’s made a lot of progress since he joined – it’s not enough at a big club like United.

How naïve was he to boast that they’ll have fitter players. It didn’t show at all. If anything they looked knackered. And why would you rest Bailey when he’s in a purple patch. Maybe Lindelof can come in for the next two games and you can play Maguire/Bailey one game each. These are the times when you realize he’s really not learning fast enough.

Was it only me or there was a point when in the first half when Fernandes could hardly run (they were trying to counter-attack) back. He almost fell but the camera moved because City were countering.

Tactics wise – why didn’t he stretch City’s defense on the wings? That has worked for Utd every time they’ve played City – counter or no counter. Was Pogba really needed last night? Two holding midfielders in Fred and McTominay did their job but it was lack of ideas in the attacking where United were poor. And Martial was soo poor. We needed width to counter or to really keep possession for any meaningful amount of time. Martial and Rashford were making so many similar runs when the ball was in the final third (not when long balls were being played). I’m definitely open to someone who understands football better and correct me if I’m simplifying the whole thing.

So really we need a proper manager who can get the most out of this team. Relying on star players is normal – most successful teams do that. But without a proper playing system or consistency – it’s really hard for this team to go to the next level. They were better post lock-down when the front 3 + Fernandes/Pogba were all in form. Greenwood and Martial have dropped in form since then but the others are still playing well. This is peak United under Solskjaer. And if that’s the best he can offer – then us fans need to accept we’re far from challenging for titles. Are we the new Arsenal? (in the sense that we can’t win big matches).

…I’m calling it right now, a team from Manchester will the Premier League this season. Sadly though, their players wear blue and their manager is bald. Last night was a good display from United even though we lost.

But, Wednesday night’s game also highlighted that we are not quite good enough yet to win trophies. Quite how the ball evaded both our CB’s and go through for a tap-in I don’t understand, but Lindelof who was the first man really should have just cleared it. Or Maguire should have cleared it. Either way, it was a really awful goal to concede because it was so easily preventable. Title winning teams don’t concede such easy goals Also, we really need someone in midfield who can be trusted to look after the ball, be disciplined with their positioning and dictate the game. Winning the ball from City is not easy, but the work rate from the United players and a gradually improving and more coordinated press meant that we did on several occasions. However, the ball would more often then not fall to the feet of Fred or McT, who after having done the hard running to win the ball, proceeded to immediately give it away. In games against good sides, we need to have sustained spells pf pressure. Right now, we can’t really do that and its another area of the team that needs addressing through transfers.

Overall a decent performance in a game that we lost to what must now be the title favorites, and not just for the League Cup. My one disappointment from the game was the absence of Bailly. Hopefully he was just rested. Before he became injured, Lindelof against Sheffield United had played an excellent log ball into the space behind their defense for the equalizer. Yesterday, against another high line, there were several moments were Rashford was making the runs into space, and Lindelof would look up, see the run and not attempt the pass even if wasn’t under pressure. I’m not sure what he offers to United’s backline that Bailly can’t if he isn’t playing that pass 2-3 times every game, especially against a high line in a game where your midfielders have no time at all on the ball. If he isn’t going to do that, then I feel that we should install Bailly as the first choice CB with Maguire.
MM, Man United, India (Ole wasn’t backed in the summer)

Five clubs who should take the FA Cup seriously

Cavani and cancel culture
This is what happens when you have an insular, public school bunch of chaps with no interest in, or understanding of, other cultures running an organization.

I have plenty of experience with Latin culture, even married to a Latina. Yes, the word used means what it means in a literal translation. But it’s used mostly among friends as a greeting, both men and women. Whether that’s right or wrong is not the issue here. What the issue is in this case are other cultures automatically judging that their righteousness is the “righter righteousness”.

In the context intended, the use of the word by Cavani is the same as mate, chum or pal.

The FA need to realise that by blindly combatting their interpretation of racism and promoting the cancel culture, they themselves are being equally if not more racist to most Latin and Caribbean populations.

Look to the Crusades and Trump’s White House to see how this attitude pans out. The FA are in the same ball park, pun intended.
Terry, Costa Rica

Blades torture
Being a Blade this year, is pure torture. With last season’s achievement seeming a distant memory, this season, is a shambles. No I don’t blame Chrissy Wilder fully, however I understand it’s him that needs to motivate his players, get the tactics right etc. The players are simply not performing what we all know they are capable of and you can see it with 80% of the team on match days. The other 20%, your Chris Bashams, your George Baldock’s are still fighting till the death and playing for that self pride, something the majority of our players need to start doing. Oliver Norwood for instance, post match interview, he was laughing, us blades watching that was seething with rage. John Fleck, John Egan, just shadows of what they where last season. This team needs help this transfer window, it will be hard to attract players of decent quality considering our lack of funds and our current league standing/performances but we need help, quickly! If not, we are going down with a record low points and ultimately a broken team, something a 2 month pre season will not fix. I don’t know what changes need to happen, obviously, we need to start winning some games, but seriously, can anyone see that happening before May with this current bunch of players? Because I certainly can’t.
Mike Klimek (Blade through the good times and this season)

Six ways to help complete the season on Covid Island

Hand in glove
Vijay from London is spot on, I’ve never seen a reason to criticise a player for wearing gloves, it’s their choice and if they want to then it doesn’t mean they are weak or lazy, it is quite ridiculous to hear any commentator even mention such a notion.

Many an article and research will show how effective wearing a hat and gloves are in keeping your body warm, I remember years ago On a show called Braniac presented by Former Top Gear host Richard Hammond did an experiment, and they found it was more effective to keep hands, feet and head covered than exposed in cold temperatures, perhaps not the most scientific sound show but still, I’d rather have warm hands than cold.
Mikey, CFC (Is it time for a Science365 sister site?)