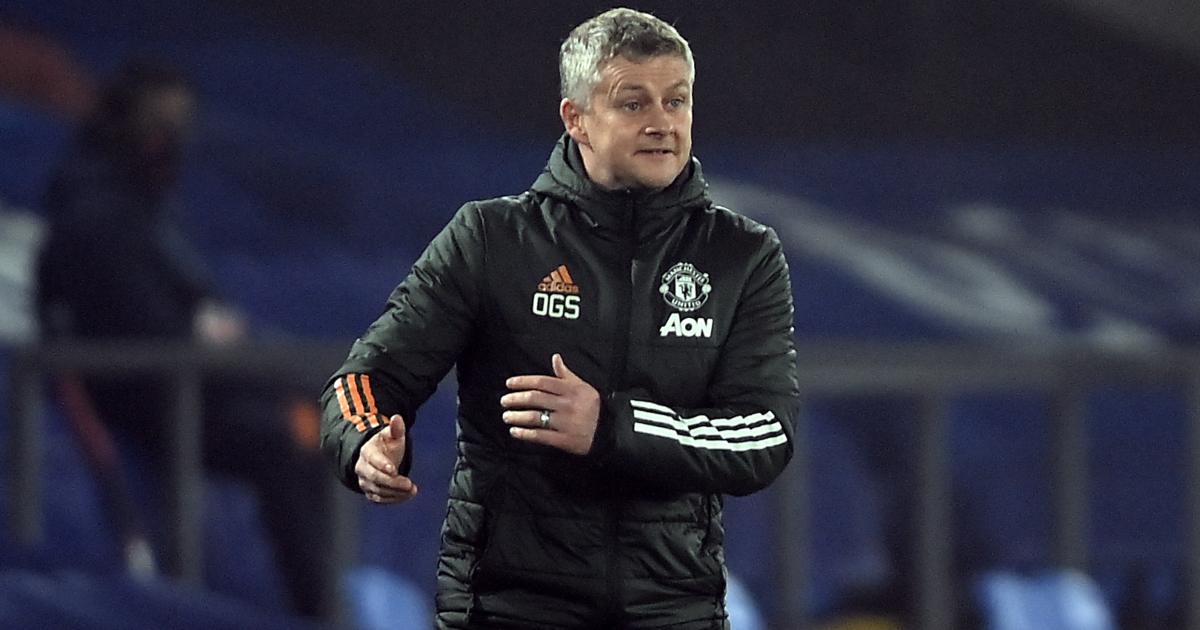 Pain at the Palace
Despite how boring the games themselves were to watch, as a United fan I wasn’t actually too despondent drawing all those games in the “Top 6 mini-league”.

However, last night was a disaster, and they seemed to have developed a bit of a rut for themselves. The 0-0 in Selhurst Park is the sixth such scoreline of the season to date, and only twice has that figure been matched by United over an entire season during the Premier League era (2016-17 and 04-05). And would anyone back against United not having at least one more 0-0 in any of the remaining “important” games before the year’s out?

During my research, I learned that Fergie had five seasons without a SINGLE stalemate, and registered half of United’s current total ten seasons in all. Ridiculous.

Then again, his side’s had such an aura to them you’d always expect them to find a breakthrough in a tight game- this current side look completely devoid of any ideas when Fernandes either plays a bit deeper like tonight, or is marked out of the game, like against Chelsea in the previous game.

United may find a way soon, or Top 4 will be in jeopardy.
Brian, Wexford.

…Last night, United reminded me of a team from ye olde computer game Match Day II. The same attack and tactics over and over again. Tippy-tappy up to box. ball to the left, Shaw to Rashford, dribble into box for cross, switch to right, Wan B, dribble into box for cross, ball breaks off defender, Fred/Matic/Bruno takes shot from 20 yards. And repeat.

They looked like a team playing to a computer code they couldn’t break free from. Will Ole turn up to the next game in a black trench coat and sunglasses?Stevie Dallas (ironically in Austin)

…Sack Ole. This will not get better. No inspiration. No ambition.
Monty, MUFC

…Shout out to all the lads claiming this sh*t is better than Mourinho, Van Gaal and Moyes.

…The stadium looks like a horror movie set…misty, eerie and 22 half dead men on it
Anonymous

…To Dave, Manchester, and James London. City are boring? Oh, and are ‘miserable and soulless’. Well, I’ve just finished watching Palace v Utd and, although I stand to be corrected, I believe one of the commentators pointed out that United have failed to score in four hours of open play. Does that mean it’s now five+ hours?

Gosh, this is a tough one. Do I carry on watching the boring miserable and soulless City or do I switch to the white-knuckle-ride adrenalin-rush games of United?

And Callum, MUFC. I take it you do ‘get’ the irony of a fan of the richest football club in the world complaining that another club appears to be rather rich?

Blimey. You guys REALLY don’t like the realisation that your period of domination has ended, do you?

Neither will City’s. Football, as with everything else in life, is cyclical. Nobody stays at the top forever peeps.

And as for Crystal Palace, unlucky for the three points I thought.
Mark (Over to you Ed QTR) MCFC.

…Yeh, that thing I said yesterday about City being boring. That was stupid. The most exciting part of that game was the fog.
Dave, Manchester

City’s resources
I keep seeing overly-simplistic or just plain erroneous assertions made about the supposed gulf in resources between Manchester City and everyone else, so thought I’d try and add a bit of balance to the discussion.

Firstly, transfer fees are a deeply flawed means of assessing the value or quality of a team. The classic illustration of this point is the 2011 Champions League Final, where a FC Barcelona team containing six La Masia graduates comfortably beat Manchester United 3-1. The Barça starting lineup (with all those “free” players) cost considerably less than United’s – does that mean that Barcelona should be lauded as plucky underdogs? Is Harry Kane (no transfer fee) less valuable than Joelinton (£40m)?

Which is not to say that there’s no value in comparing teams’ resources, because there absolutely is, but I believe wage bill is a much better means of evaluating the current value or quality of a squad. Sure, there will always be some overpaid has-beens or underpaid rising stars here and there, but overall it’s a more accurate picture.

According to the first thing that shows up on Google (that’s how deep a dive I’m prepared to do here), Manchester City have the second highest estimated wage bill, coming in at just £500K more than Liverpool and a whopping £39m LESS than downtrodden paupers Manchester United. United are spending a cool £176m, City are at roughly £136.5m, Liverpool £136m, Chelsea £133m, Arsenal (!) £131m, and Tottenham £129m.

All clubs competing in Europe have to abide by FFP regulations, and all clubs are allowed to register the same maximum number of senior players. Given that City’s wage bill is largely aligned with the rest of the Big Six, this would suggest that City aren’t really operating with resources that are orders of magnitude greater than their rivals. It seems to me that they just use their money a lot better than everyone else.

Similarly, you won’t see any City players in the top five list of most expensive British transfers. Manchester United, Liverpool, Arsenal and Chelsea all have a more expensive record transfer than City’s. They don’t really buy many superstars. They tend to buy players of a certain age and at a value that allows them to amortise substantial but not earth-shattering transfer fees over a longer contract length. This, combined with competitive (but clearly not above market value) base salaries, plus not doing business with extortionate agents like Mino Raiola, allows City to keep their expenses in line with their earnings.

…I’ve never felt the need to write in before but I was taken aback by the article concerning Manchester City and their domination. The final line suggesting that it needs to be a challenge for the clubs below City despite the ownership was one I was particularly interested in because there was reference to previous runaway winners of Premiership titles. No team has ever had to face the wealth of City in history and if it wasn’t for Liverpool for the past two seasons,(two seasons which now seem like anomalies) we would be witnessing an unprecedented era of domination.

This is no way comparable to when Liverpool, Man Utd, Chelsea and possibly Arsenal (can’t remember if they won it by a huge margin or not) ran away with the league, or when Blackburn bankrolled their way to the top. Jack Walker wasn’t ever accused of human rights abuses. Martin Edwards and the Glazers aren’t homophobic as far as I’m aware and John Henry hasn’t ever tortured and detained any of his rivals. Even Abramovich, as shady as he obviously is, doesn’t govern Russia, he doesn’t make or break the rules there and he’s certainly nowhere near as powerful as the Al-Nahyans.

City’s dominance is a problem. Not because of how good Guardiola is at his job and not because of how good the players on the pitch are. But because of where the money comes from to make it all possible. In a sport plagued by issues with discrimination, it’s sickening that people like Al-Nahyans are getting such a firm grip on the English game. Future generations will look back at this era, stunned that we ever sold our national game to one of the worst dictatorships on the planet. Shame on the Premier League for allowing it to happen and shame on you for endorsing their success.
Jon Joyner (LFC)

Seething at Smith
Whoever gets the task of midweek Winners and Losers needs to have Dean Smith and Villa in the Arsenal and Mourinho spot as top of the Losers.

Even getting over losing to the club bottom of the league on 11 points at kick off and them being a man down due to an awful referring display, this was coming.

Smith has set the team up to play against Sheffield United as he did against Leeds. Who does that? You are going to be have more possession so maybe don’t play a defensive midfielder who is a backs against the wall clean up merchant.

We haven’t come from behind to win any game this season. Not once. That is the manager’s failing for either not setting the team up right or not having the ability to change things when clearly isn’t right. Waiting till close to the 70th minute to make subs isn’t good management. You need balls to succeed and Smith is lacking them. I absolutely love seeing Managers admit mistakes and making changes even at half time – look at Villas subs throughout the season – we don’t. Top class managers do.

He will be out now saying the players didn’t perform. Will be giving praise for being honest. But he can affect this during the game and doesn’t.

I won’t even start on the reliance on Grealish.
Paul (this is so amateur) O’Sullivan

Family filth
If I’m not too late to the swearing discussion, it’s perhaps worth pointing out that thousands of kids up and down the country are exposed to some of the filthiest language you’re ever likely to hear on a weekly basis . . . Not from footballers, but from football supporters. Most of the swearwords I know I heard for the first time in the family stand at Portman Road. A few years ago, at White Hart Lane, I was astonished to see a father and son bonding over a chorus of “the referee’s a w*nker”. I’m really not sure the odd naughty word on TV is the problem.

Managers of the future
I have long held a notion that current football managers who are ex-players (so pretty much all of them), only went into football management, because back in their day footballers weren’t paid the astronomical fees paid to players today. This means that ex players (current managers) still need to pay their mortgage, insurance, children’s educations and put food on the table.

If this is true, what kind of future do we have ahead of us? Will Messi, Ronaldo, or any player on 100+ a week ever go into football management? Will we see Lidl managers move into football? Will we see Ligue 1 and below players become managers of top clubs in future?
Wurzel

Saint and grieving: A tribute to Ian St John

Ian St John memories
Another, of those old enough to remember, one of our football heroes gone. I’m a United supporter but had a lot of 1st division footballers pictures on my pre teen bedroom wall. Sinjun was one.
There was a famous poster in Liverpool.
JESUS SAVES! it proclaimed…some Scouse wag added in big letters BUT St. JOHN PUTS IN THE REBOUND!

RIP, Ian you can now see if you can put one past the Lord without him getting a hand to it!
Gary(ex Pat United fan in Pennsylvania)B

Essential signings
In response to Andrew, Banbury. I’m an Everton fan, so there are a few of these. Not so much players that signed for other clubs, but ‘essential’ signings we actually made that turned out to be anything but. As I said, there have been a few of these recently, but Davy “missing link between midfield and attack” Klaassen has to top the list. Sweet lord we were all smug and excited when we signed him. Safe to say it didn’t go to plan.

Also, with all the talk of <insert manager here> would do better/worse with <insert squad here>, maybe at the end of each season each club should be randomly allocated an existing PL manager. I’d pay to watch that.
Will Wymant (Sandro is also up there, what a summer that was), EFC