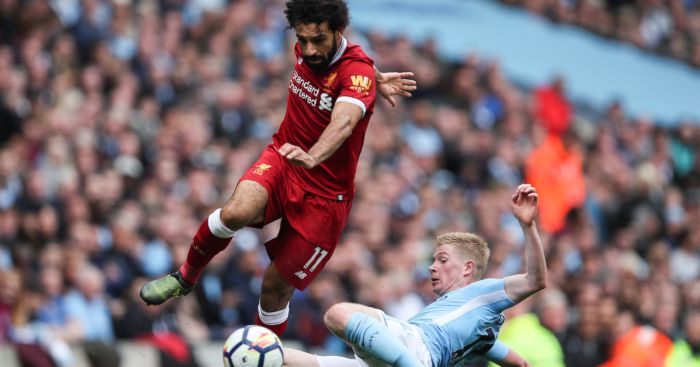 Thanks for your e-mails on Kevin de Bruyne and more. Send your thoughts to theeditor@football365.com

Kevin de Bruyne…
Bristol Blue has made a nice argument to defend KDB by stating that he has 30% of assists in eight games. I feel that their response is a little facetious and is an example of the consistent approach of fans who defend KDB at every cost. Mike’s mail used assists to league goals to argue that Kevin’s influence is overstated.

While there are flaws to his argument I think it has some merit. As I’ve said before Man city are failing to reach standards they set when Kevin was injured and Bernardo took his place in midfield and city subsequently reached 98 points. I would again ask KDB’s biggest defenders to explain why Man City were better when he was injured than they were last season when are apparently tore up the league? I’ve always wondered how a player from a team that had invested hundreds of millions and had the best midfielder to ever play in England  reaching apparent Messi levels could finish 17 points worse than they did the previous season.

As the world class players around Kevin have either left the club or had their form dip he has become more important to the club. The mailbox would’ve scoffed if I’d suggested that Phillipe Coutinho was world class or generational 3 years ago. I see KDB and coutinho at Liverpool as similar players in the sense that the players around them look to one player to be the difference. This was similar to Gerrard. However, this is the crucial point, if KDB is the player that the mailbox and the media say he is he should be shattering records and leading his team to glory especially when everything is going through him as Daniel Storey pointed out. If he’s to be talked about as the best midfielder to have ever played in England should he not be producing numbers never seen before a la Messi and Ronaldo. Suarez scored 31 goals in 31 games in 2013/14 and no one mentioned him as a great striker. That was probably fair because it was one season but he has reached heights Kevin hasn’t in his career. I would argue that Mohammed Salah has reached a higher level than KDB during his time at Liverpool, where he broke the premier league goal record as a winger and reached numbers in the league that have not been matched since his arrival. Most importantly he has led Liverpool to the biggest prize in football the champions league and scored in the final.

I can accept Kevin is excellent and world class. I simply can’t accept that I should marvel at the levels he’s reached when as Mike pointed out his team has fallen off a cliff because  the world class players around him have left or lost form.
Sean

I’ve seen this growing, the way Jamie Redknapp and his “experts” go on about Kane, the same way all the other lackeys go on about him as if he’s the best player in the world. Just stop it. “Itz coz e iz inglish innit”

He’s a decent player with unflappable mental strength, but that’s it. Like de Bruyne (actually pronounced closer to de Browner than anything proffered recently) he’s a pretty decent player but everyone just needs to put their cock back in their pants. Kane, like de Bruyne, can make a good pass, then shank one into the stands, or miss the ball completely. Take Son away and you’re looking at a very different player.

Like James Rodriguez, take away Richarlison and he’s a totally different proposition.

My point is that most forward players need other good players to fulfill their potential. Remember, it’s not an assist if the other person doesn’t stick it away.

I’ll now go and stick my own cock on the block and say that the best players in the league this year are those that enable their teams to play well: Grealish, Richarlison, Mount, Zaha, Mane, Sterling, Son, Salah

Liverpool have 2 of those, which is why they’ll win the league again
Fat Man

Reason number six…
Reason number 6 why Spurs will win the league – the years ends in a “1”. I know that hasn’t been a thing for, like, 30 years, but still.

Izzet just fantasy?
I think Mike (Muzzy Izzet is World Class) could potentially land himself a governmental role in manipulating statistics post-Brexit! Just imagine if Leicester has scored five goals all season and Muzzy Izzet has assisted all of them. 100% – you could write about it on the side of a bus! Marcus Stewart once scored 19 Premier League goals for Ipswich which represented 33% of their goals that season, automatically trumping (hold on – can this particular verb be used with any seriousness anymore?) Sergio Aguero’s 26 goals for City in 2014/15. Only 31% – I bet Pep was raging!! Cue a summer of studying Stewart’s insuperable poaching video clips surely awaited poor Sergio.

In fairness to Mike and, indeed, in the face of adversity, Muzzy Izzet had an incredible season back in 2003/04 and his contribution enabled a poor team to tread water instead of sinking without trace. Indeed, I remember the Turkish midfielder to be a fine player at the turn of the century, but only hyperbole can allow comparisons between a player with 37 PL assists in his entire career to the immensity that is Kevin de Bruyne (so far with 76 league assists across his four full seasons with Manchester City). In doubt? Simply type into the YouTube search box ‘De Bruyne assists’ and sit back and marvel at the perfectly weighted passes and trajectory of his diagonal balls. Or just watch one of his match-winning, barnstorming, breathtaking performances at the Etihad or at Stamford Bridge, the Emirates and Old Trafford for that matter.

All that said, perhaps Matt Hancock’s best attempts to demean the term ‘World Class’ have not been in vain and could Muzzy Izzet simply be considered the footballing embodiment of the Hancock World Class Rebrand?!
AC in Milan

Prick of the Week…
I get that Dave Tickner was probably trying to be funny and ironic with his Liverpool Prick of the Week column, but actually it just read like a letter from a die hard fan in the mailbox not a piece of journalism.

Yes, Liverpool are the best team in the country, and yes they are clear title favourites in my eyes and deservedly so.  Whether we needed another whole article to tell us this after 16 conclusions already did exactly that is debatable, but no arguments on substance there.  But no, Tottenham are not ‘technically’ still top.  They are top, because that’s how the league table works.  They might not be at the end of the season, or even the end of this weekend, but right now they are.

As for nothing under ‘previous’ – we’re just pretending Project Restart wasn’t a thing and Liverpool weren’t the driving force behind it already are we?  It was your prick of the week nominee all of 4 weeks ago.

Next time, if Dave just wants to file such sycophantic copy directly with the Liverpool Echo and not bother the rest of us that would be great
Phil, London

Where are all the thunderbastards?
In response to Alex’s review of lesser thunderbastards these days, I have another point to add to his musings. Managers like Pep (foremost example) and others ask players to play percentages by taking shots from closer to the goal or creating more chances with higher probability of scoring. xG statistics have really influenced the managers’ thinking in this regard.
Aarez (Pakistani Gooner)

Football reforms…
Well, ‘Breath test’ Mark definitely touched a nerve. And, to be fair, he simply got some things wrong. Attending a professional basketball game in some parts of Europe, for instance, can be a fairly terrifying experience. And his suggestion ‘white men’ are one-third of the problem is itself problematic  – bad behavior, especially when it’s fueled by alcohol, is hardly exclusive to one race.

That said, some of the knuckle-dragging at football matches cannot be defended. Splashing some cash on a ticket is not license to behave however appallingly you wish.

Yet this conduct is not somehow ‘universal’. I’ve attended a bunch of Toronto FC matches, for instance, and it’s all a bit of a laugh. Yes, the refs occasionally get yelled at, but usually in a very apologetic and Canadian way. Yes, pints get downed, but I’ve never seen that translate into genuinely obnoxious behavior (and I say that as a non-drinker). There’s even a section at Toronto’s pitch for self-styled ‘ultras’ and, really, the most they get up to is waving flags, banging drums, and maybe airing a bit of industrial language. When they do get a bit out of control  – as one group did at an away match in Montreal, where they set off a bunch of flares –  the ultras actually police themselves. The Red Patch Boys, in response to that incident, released an official statement that said, “(V)iolence and violation of stadium, municipal, provincial or federal law is not condoned.” Wrap your head around that: one ultra group reminded others that respecting the law is important.

I also don’t own a season ticket to TFC matches. I’ll just grab whatever is available. Unless I’m missing something, there do not seem to be any designated areas for home and away supporters. Everybody is mixed together and nothing much comes of it. I did spend one match being pestered by an away fan, but that was simply because he wanted to swap jerseys; I kept declining because his team’s kit was ugly, but he kept begging because he’d seen the exorbitant prices in Toronto’s stadium shops.

I don’t know how the atmosphere at matches in England can become more ‘Canadian’. I’m also aware that the behavior at other professional sports events in Canada might not be quite so good-natured as at TFC games (though I also support the Raptors and I’ve never found that experience unpleasant, ticket prices aside). I will say this: sitting in Toronto’s stadium on a warm and sunny summer day is a ton of fun. You might even find yourself (as I did at one match) chatting with Toronto’s general manager in the executive box right behind you, making fun of Laurent Robert. Fun times.
Chris (can’t wait for games you can actually attend) in Canuckistan