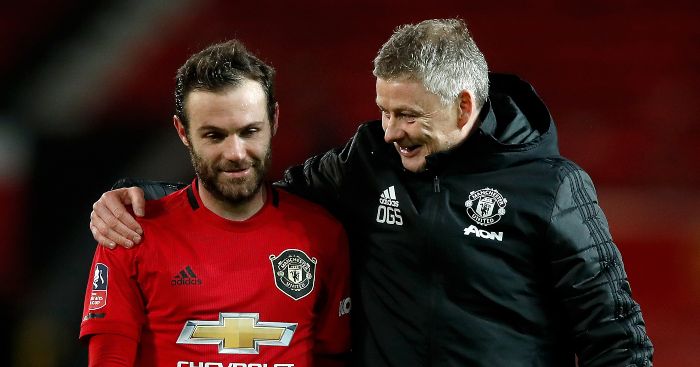 Check out our Merseyside derby Mailbox special and send your thoughts on Juan Mata to theeditor@football365.com.

So we won 4-1 but for some reason I’m not excited nor hopeful. I can tell you that after our loss to Burnley  in Jan I hoped that Ole(great player and ambassador) would have gotten the sack. He didn’t and we went on a great run and I can say that during that period I was pumped up and optimistic for the first time in a very very long time. Watching my team play under Moyes, LVG and Jose became a chore. By half time I’d be asleep or just miserable. Our post covid run gave me a shot in the arm but Ole will not be the one to take us back to the top.

To cut a very long story short, today’s result showed me nothing new. When we have space to attack we are lethal but take that space away and we are bereft of ideas. Against teams that sit deep, we struggle real bad. Something we all know but for some reason the manager has not yet addressed this gigantic weakness. We will never win the league unless he fixes this(verify little evidence he has the ability to support this).

Until he proves otherwise, Ole out.
Tauriq, Cape Town.

Imagine leaving a club who utterly adored you to sign for the current reigning champions only for your first manager to be David Moyes, who, is, well David Moyes.

Then your next manager is LvG who hated attacking players, No 10s specifically.

Then your next manager hates you. Your very being. You’re more than likely the nicest guy in the world never mind football and still he hates you.

AND then your next manager just isn’t very good. So poor that results have dictated you suspended your fantastic blog posts on a number of occasions.

Yet you still turn down mega money, twice, to play football in the Middle East to stay at a basket case of a club who doesn’t deserve you.

Juan has easily been the best post Fergie signing United have made and it’s not even close.
Wayne, Manchester

Whatever fire was lit under Shaw’s ass, wow!

Donny in the darko

We’re now at the point I’m convinced Ole Gunner Solskjaer read Will Ford’s article and has taken it a little too seriously.

Are we going to have another #freeshinji situation on our hands?

He’s contributed more than any of our other centre midfielders in only 45mins. JUST PLAY THE F*CKING DUTCH MAN.
Mark Endicott, MUFC

Great result for United but a quick question, if De Gea had to face a retaken penalty for moving a millimetre off his line how come Newcastle’s keeper can jump 2 foot forward and save it without being called out by the referee?
Paul Murphy, Manchester

Frank Lampard’s time is running out

Another game where I hold the result to the coach than the players.  What’s annoying me more now is Frank is picking on players after each game for errors when the inquiry must go to him and the coaching staff.

– Why does Lampard play Mount on the wing I never know.  Mount is a sensational talent who must play as a number 8 between lines close to the half-spaces.  He is deadly there and can influence games.  When CHO is fit (and playing well in general) why Mount has to be shoe horned I never know.

– The entire issue started after we conceded the first goal.  At half time Frank should’ve told the players to continue what we were doing.  What’s bizarre is Frank stating he wanted them to hoof the ball up as he expected pressing from Southampton which they anyway did in first half.  It’s not as though we have a Drogba or Costa to target long balls and hold up play.  Werner is a sensational centre forward and the ball has to reach him methodically.  What use is signing Werner if the idea is to hoof the damn ball up?

– Unlike other Chelsea coaches, Lampard took over a team that was playing well from the back.  Conte and Sarri had beautifully set up circuits (more than one circuit) to progress the ball from GK to midfield and beyond.  All Lampard had to do was keep the good things and simplify it.  Our ball progression from deep is one of the worst among top teams.

– As evidently there’s no plan on attack/defence, when we are pressurised, the defenders/midfielders panic and do all sorts of clumsy things.  e.g. Southampton’s second goal – look at the comedy of errors.  Kepa has been poor, but don’t let it cloud the comedy that happens ahead of him.  If anything Kepa and the defence enhance each others insecurities and it ends up in error after error.

– Where is the coaching at a micro-level to have a plan of action in moments during a game? When we’re 2-0 up, when an opponent is on momentum, when we are chasing a game? It seems the idea is to put genuinely world class attackers and hope they produce goods – which is what Kai and Werner did anyway.

– Lampard’s substitutions are even bizarre, it was his sub that killed the game against West Brom and again his last substitution killed us.  Mount though I don’t like to see on wing was one of the first line of defence, if anything Lampard should’ve moved him back, swap the excellent Jorginho for Reece to see game and change shape to a 4-3-3.  Instead, our overthinking coach did the worst ever move and it backfired at the end.  I was surprised Southampton didn’t win the game – legit it was their game to take.

– A word on our attackers – sensational! A world class CF in Werner, a potentially WC attacker in Havertz, CHO, Ziyech, Mount, Pulisic – all capable.  Yet does the system/structure and coaching optimise their talents for Goals and Assists? I am not sure

– Lampard has done a good job last season, importantly his eye for talent be it academy or outside has been nothing short of phenomenal – our recruitment has improved, but my god the coaching and managing a diff story.  It is becoming sadder day by day to see an intelligent man over thinking and making rookie mistakes.

For god’s sake Frank play the best players in their best positions and we will improve automatically.  We can sophisticate tactics later!
Aravind, Chelsea Fan

Two years ago Chelsea’s issue was scoring goals, that has now been rectified, we score goals, quite nice goals at that, but defensively we look truly fragile.

– Timo Werner grabbed his first two league goals and both were quite nice finishes, he deserved both and has been a true worker during each league game he has featured.

– Hakim Ziyech finally making his competitive debut was another fantastic sight to see.

Now onto the negatives:

– Conceded 3 goals, all 3 were avoidable.

– Frank Lampard has had over a year and yet still cannot fix our defence, his tactics are woeful defensively.

– Kepa was Kepa, I must put this crazy suggestion out there to Liverpool fans, surely you wouldn’t swap even Karius for Kepa?

Starting to wonder if Chelsea can get Persil as their next sponsor, as we may start keeping clean sheets.
Mikey, CFC (Did you see what I did there, because we are sponsored by Three, yet scored and conceded 3 goals? Awful I know)

The real talking point of the weekend

Forget the drama at Goodison. The real issue of the weekend is why the f**k were we wearing a dark blue away kit instead of our usual red and white, away to a team who’s home colour is sky blue?