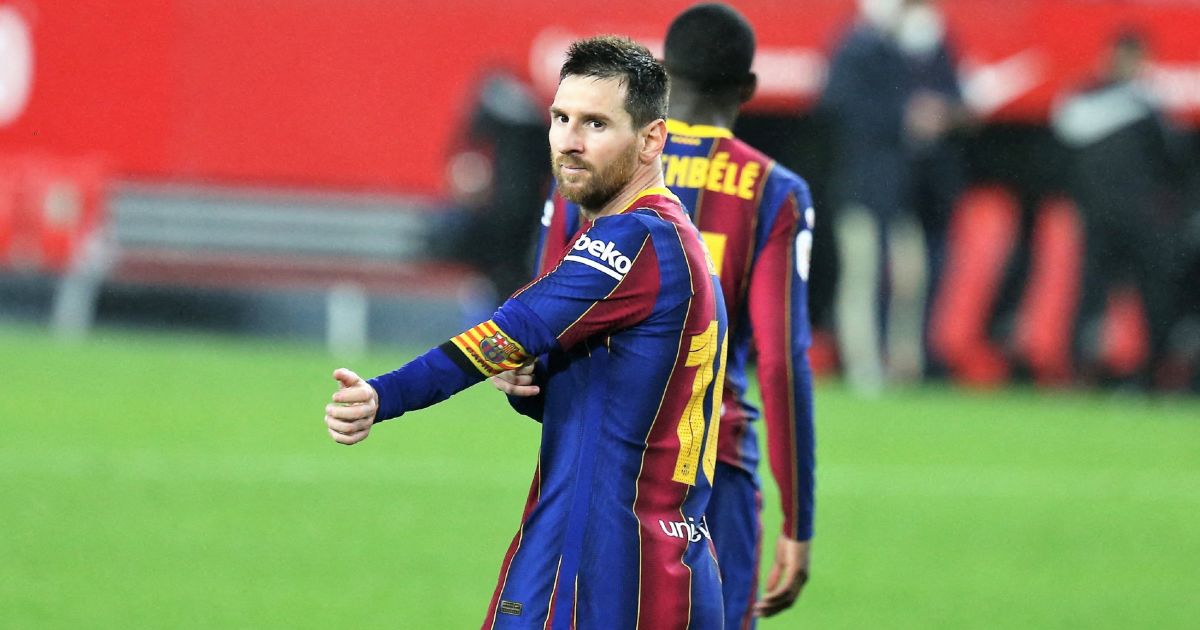 Send your thoughts on Lionel Messi or anything else to theeditor@football365.com

Playing safe
There’s a really interesting conversation to be had about Messi’s career.

You can start with the use of human growth hormone to cure his dwarfism (which genuinely might have threatened his life)… An extremely beneficial side effect of this however is increased muscle strength density and recovery which you could attribute to him playing several ages above his level when younger whilst also being the size of a baked bean. For the record I’m not stupid enough to suggest Messi doesn’t have talent, he’s quite clearly one of the most gifted players in history but there is always that tiny asterisk of…what if?

What if he didn’t get the HGH? He probably would have still lived, plenty do live perfectly full lives with his condition. But he definitely wouldn’t have been a professional footballer.

What if he didn’t happen to play for Barca at the time they had the greatest coach in history, with the greatest team in history when there was little competition (though that’s largely down to how good Barca were) which also played to the strengths of Messi. Would he still have the same record and success if he played for… Atletico for example? An argument can be made.

However one thing you cannot level at Messi is that he has somehow been a drain on Barca and caused their financial woes. Messi is one of the few players in world football who definitely brings in more than he costs, with sponsorships, endorsements, shirt sales and of course the MASSIVE amount of prize money he has helped Barca win through success. The claim he’s selfish is extremely unfair because in no universe is he a net drain on any club. A net drain is someone who costs money without bringing enough in to counter balance it, can you really say that of Messi?

In closing I think it’s a shame he never tested himself in England because that’s also a tiny asterisk next to his name. Those who say I’m overvaluing Premier League in saying Messi might struggle are conveniently forgetting the litany of genuinely world class foreign players who look like George Weah’s cousin when they come to premier League (Shevchenko, Higuain, Falcao, Kluivert, Suker, Morientes etc). It’s a very physically demanding and fast paced league and lots of players fail to adapt because no other league has the same intensity, many foreign players comment on it when they come here.

It would’ve been interesting to see how Messi did. Now we can only speculate, which is why for me Ronaldo is the better player of this generation because the dude went everywhere and won everywhere and at every level. And as a Liverpool fan that stings to say but it’s true.

Messi played safe his whole career and will finish in safety in Paris too.
Lee

Community spirit
The most important part of the Community Shield was right there in the first six words of your “review”, The roar of the Leicester fans. Yes, a domestic football match of middling quality (to be kind), which happened to be played in a relatively full stadium. Quite different from the Rugby Union match your writer appeared more interested in, played as it was in a different stadium than planned, and an empty one at that. For a website obsessed with stressing that fans are the be all and end all of football it was rather surprising to see their presence at a football match in this world of ours as rather trivial.

It strikes me as to get something published at the moment you have to mention Messi, so here goes. Should it be so that Depeche Mode are right, that God has a sense of humour, then please let Messi be revealed as a Real Madrid player in the next few weeks. It would be a bit like Figo again, but even better.

All the best
Lee, Boro

United plans
Listening to Ole can be interesting, he clearly admits that they were after Sancho last summer but could not get him; he also admits that he was after Sancho for his ability to play on the right wing and not left where he spent most of his time last season; he also admits that he is willing to wait for his main targets to become available rather than sign replacements; he admits that Ighalo was a stop-gap signing and that interestingly, Edinson Cavani, a man signed on the last day of the last summer transfer window was actually a target of his; and perhaps most important, is that they have done their main business for the summer and the club got him his first choices in the positions he felt needed strengthening.

From all that, the following can be deduced:
– That Declan Rice is Man Utd’s first choice for the DM position and they are willing to wait till the next summer to sign him. Perhaps he feels Matic has one last great season left in him.

– Or that he is not signing a DM because he wants James Garner to fill that role and for that, Matic is the stop gap.

– That Atletico are being annoying with a player that has only one year left and they are willing to play the ‘who caves in first’ game for Trippier.

– If that does not happen, Dalot stays so whether they get Trippier or not is really a bonus.

That leaves Ruben Neves and Eduardo Camavinga, I don’t know why they are being linked to United, but it may be a case of informing the clubs that your player(s) is not our only option like the links with Coman when the Sancho signing was almost done to further pressurise Dortmund. Then again, those may just be agent talk.

It’s also possible that Cavani was signed as the stop gap before Haaland is eventually secured or Greenwood eventually develops. Whatever it is, one thing is clear, man utd have caught up with the times. There is clear vision in almost every signing, only Liverpool could claim to have that. Now, let the games begin.
Sa’ad

Wage war
It is important to realise that when a club sells a player, they pay out the remainder of that player’s contract to the player. So, if Spurs sell Harry Kane, they have to pay him 30 million pounds.

So typically, the minimum transfer for any player is the remainder of their wages. There is the occasional exception, Man U took a loss selling Rooney to Everton, or a player can submit a formal transfer request which means they’re surrendering that payment (which is why that never happens any more), but they’re very rare.

And that’s why:
a) net spend is mostly rubbish, because no-one calculates it correctly. You should be deducting the players remaining wages from the incoming fee. Though don’t worry Liverpool fans, you’re net spend would still look good because it’s mostly based on Coutinho’s transfer fee (on the other hand, I support Southampton and they’d look a lot worse)
b) No player has tried to use the Webster rule, they’re generally financially much worse off.
c) Man United can’t offload any of their players. Their wages are so ridiculous that the players that don’t workout have too much left on their contract for anyone else to pay that for them. Again, Southampton have had the same issues which is why they have a variety of busts on contract and on loan for the last few years.

One more thing while I’m ranting about money. Money is the reason Football is at the Olympics. At a normal Olympics, it has the highest total attendance (and ticket sales). A lot of that is structural, lots of games at big stadia, but it’s also because football is the most popular sport in the world and will draw good crowds all around the world (maybe not in 2032 though). So the IOC want football at the Olympics, whereas FIFA don’t really care if it’s there or not.
Chris, NZ Saints fan

Final analysis
Just a quick observation about £160m worth of Harry Kane. In Kane’s three biggest games of his career to date, the 2018 World Cup semi v Croatia, the 2019 Champions League final v Liverpool and Euros final v Italy, Harry Kane was totally ineffective to the point of being embarrassing. As a club owner, would you fork out big money on a player that is so ineffective in the biggest of games? No, neither would I.
Karl Tabbinor