Also in your Mailbox: Let's all stick together, missed games and goals, Brazilian rogues, oneupmanship and more... 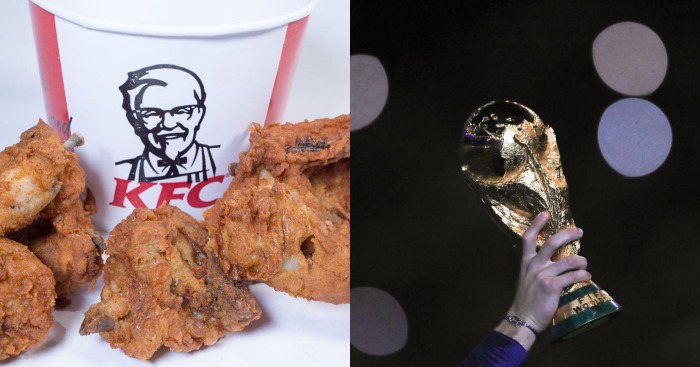 Where were you?
Mikey mate, why on earth did you choose to go to KFC over a world cup semi final between Brazil and Germany? If you were at a wedding or a job interview fair enough, but KFC? I almost missed the Liverpool epic against Barcelona last season due to being at a party with my girlfriend, but the moment I found out the first goal had gone in it was straight to the pub with about 3 other guys there too haha. Wish I’d missed the final though…
Juanito

I do love a novelty XI, and I firmly believe any novelty XI should be about something obscure, such as beating up on your team-mates. However I think you hath missed a trick, Sir.

What about a novelty XI who have been involved in a fracas with a colleague but have also played for Newcastle United? Could one club really have employed so many miscreants and rogues that I could really flesh out a starting XI? The hard yards were mostly done when Mikey included Barton, Dyer, Oneywu and Bowyer.

Only 7 more required I thought to myself. So here goes….

GK – Andy Carroll – Busted up Steven Taylor after the central defender had the temerity to grumble about big Andy sleeping with his girlfriend. ST left the club shortly afterwards, and big Andy was forced to room in with Kevin Nolan the incumbent captain. Clearly not a goal keeper of any repute but wont get in up top when you read what is next coming.

LB – Olivier Bernard – He was knocked out by Laurent Robert. Some say accidentally. Clearly Robert meant to do it. See for yourself.

CB – Steven Taylor. – After getting his clock cleaned by Carroll, (with a “broken jaw”) to boot big Andy was seen sporting bandages on both hands. Don’t believe this fantastic tale?

CB – The Gooch – Time was Newcastle Utd fans thought we’d stolen a march on our rivals by signing Oguchi Oneywu. We hadn’t….

RB – John Carver – Although he was an apprentice at the magpies and signed professional forms in 1983, he never made his debut and had to wait until his time as SBR’s assistant for his true moment of glory. Before Newcastle travelled to play Real Mallorca he and Bellers had a fight in an airport after taking exception to being called a “Geordie c**t”. Shay Given dscribed it as “like Wrestlemania”.

LM – Keith Gillespie – “Dizzy” was a fantastic player, fast, skillful and his injury is probably the real reason Newcastle didn’t win the title in ’96 rather than Asprilla’s arrival. However his fondness for booze and betting ultimately cost him everything. During a pre-season trip to Dublin he became a general pain in the arse and fought (briefly) with wor’ Al.

CM – Dyer  – want to watch a replay with D list celebrities throwing in their tuppence? Course you do.

CM – Bowyer – Did you know that after the fight Graeme Souness got involved. As NUFC manager his conflict resolution consisted of “If you two think you can f*cking fight, I’ll show you. I’ll take the pair of you on whenever you want. Come on then if you’re so tough. You two couldn’t fight anyone”. Quite the wordsmith I think you’ll agree. Let’s all enjoy the man’s legendary diplomatic skills at work in the international arena.

RM – Laurent Robert – You know he meant it right?

Manager – Our Graeme – Obviously (see above).  Alan Pardew almost made it interesting but ultimately David Meyler was playing for Hull.
Michael McGowan

Brazilian rogues
Dan Mallerman’s email from Friday’s mailbox, about excellent players who never get called greats, reminded me of the goal scoring genius that was Romario!

That sparked off thinking about the high volume of Brazilian greats who go spectacularly off the rails, not just a little bit, but marry your niece, gain 100 lbs, end up in a Paraguayan jail on fake passport charges, type off the rails.

A quick search of my brain brought to mind the original Ronaldo, Adriano, Ronaldinho, Romario himself, Edmundo, Hulk and Robinho.

That is just the 90s onwards, the Socrates and Garrincha stories are arguably even crazier.

There’s potentially a socio-economic reason why these players get phenomenal wealth and then go mad and its tragic really, but I must say I’ve enjoyed the Ronaldinho fake passports story a lot over the last few months!

Has another country or club team got such a concentration of rogue ex-players?
Jon, London

Keith, really?
Ok, I know that this is a difficult time for everyone but Keith, do you honestly believe what you wrote or is this just letting off a little steam? Just a quick thing fella..

The idea “is the very strong likelihood that the vast majority of these established players will, whether they have had any say in it or not, be involved in tax-avoidance strategies to ensure that they pay as little tax as they possibly can” is incredibly presumptuous and incredibly inaccurate. You hit the nail on the head here. Tax avoidance is legal. Gift aid is a form of tax avoidance. Companies buying low emission or electric cars is a form of tax avoidance. Aggressive tax avoidance is morally wrong yes. But the assumption that all footballers are engaging in this is a huge step up from this. Look at social media. Look at Mark Noble donating to various causes across London. Look at Sadio Mane donating funds for an orphanage in Senegal. Does this really tie up with the idea that all footballers are paying zero tax? And they don’t have any say in this? Have a word with yourself mate. Please don’t make assumptions based on what you presume to be the case. Most footballers are down to earth people, who actually just want to help as they have a moral compass. You supporting grassroots football doesn’t automatically make yourself morally better than someone else, which is how your mail reads as.
Sam, LFC, North Yorks

Hi there, just read your piece about the top players aiming for a 4mill contribution to the NHS and how actually small this gesture is.. I’m in total agreement, how about when the season resumes we boycott games in HUGE numbers…. Let the over paid prima Donna’s fear for their greedy wages….
PAUL

Missed ‘games’
I read Minty’s email today and just thought i would add an eerily similar story to that.

in 2005 i was 14 and living in Malaysia. The game was at 2:45 and i had school the next morning so at 3-0 down at halftime, i decided i was better off with 45 minutes more sleep, and thus cried myself to such a stage. Never admitted that to anyone until University

On a positive note, this thought me never to give up on my team and always stick it out no matter how bad the situation looks. one year later and Liveprool were in the FA Cup Final. Konchesky’s cross flew over Reina’s head and again, i wanted out. But i thought back to that CL final and stuck it out. When Gerrard hit that volley at exactly 90 minutes, i flew off my couch before the ball had hit the net and the remote landed so unfortunate it switched the channel.
When i managed to switch it back Gerrard was celebrating with his teammates. Have rewatched it over and over again, i will never tire of that goal. magnificent strike.
Nik, (tonnes of missed goals cause of bathrooms breaks), Munich

Missed goals
When Crusaders played Ballinamallard United in September 2016, we won 5-1.  Nothing significant about that, on the face of it.  But the Crues third goal was scored by Craig McClean, our left-back.  He came up from the back and headed in a corner.  “Craigers” was what you would call a traditional left-back, no overlapping runs, no joining the attacks, just solid 7 out of 10 defensive work every week; the sort of player who is the backbone of league titles (he won three).  I was in the social club and the half-time pint ran on a bit so I missed McClean’s moment of glory.  It was his one and only goal for the Crues.  He was there for six years and made over 200 appearances.  Strangely when he went to Ards he stuck a free-kick into the top corner AGAINST Crusaders but I missed that too because again I was in the social club!
Matthew, Belfast

Let’s all stick together…
Right here we go. I have spent the whole week reading vile after vile comment about this truly awful situation we find ourselves in. Get a frigging grip. This is not a time to be red or blue or green or white. This is a time to be a human being and look after each other and support each other. Can we not pull together and say hey boys and girls hope we are doing well In the current climate. No we can’t. What we have is bloody divvys jumping on the first bit of negative press they can find and then tarnishing evefybody associated with the same brush. Mike Ashley is a c**t. Does that mean ever person who supports Newcastle is a c**t. No it doesn’t. Daniel levy is a c**t. Does that men every spurs fan is a c**t. No it doesn’t. John Henry is a c**t. Does that mean every Liverpool fan is a c**t no it doesn’t.

Why the hell are we letting these c**ts in charge of our clubs dictate how we feel. We are all human beings and this is an awful situation to be in so have a bit of bloody perspective. The real twats of this are the premier League and the club owners. They are the ones with the Doe. Never mind the players who pays their wages? The owners. Why should a decision made by Mike Ashley Daniel Levi and John Henry cause so much vile comments on this wonderful site. We should all be pulling together and slagging the people off who can make a different but refuse to.

I Bloody hate Man U and I can’t stand the blue sh**e but I would never have let it get as far as some of the comments I have seen in this mailbox this week. I will not and I repeat not be held responsible for an employment decision made by an American owner. Nothing to do with me. I knew it was wrong as soon as it was announced. It was a disgrace. But what is even more upsetting is the Fact that fellow humans not football fans, humans have showed their division’s between each other more than ever in a time when I really think we should stick together.
Ryan