Also in your Mailbox: Jose Mourinho, Jack Charlton, next year is our year, football's greats, UCL draw and more... 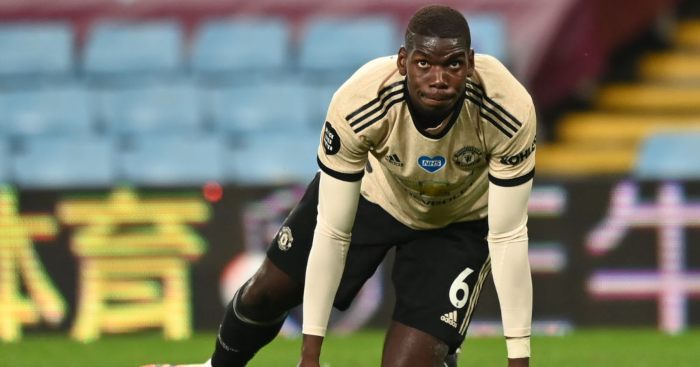 Leadership and Pogba
Ted agrees with Keane saying that Pogba is glad to be shirking leadership duties. I couldn’t disagree more. Pogba has not set the world alight during his time at Man Utd, that’s fair to say. But when Pogba rejoined, I’m sure it was under the promise of a rebuild project that would see Man Utd challenging for titles, competing in Europe, and showcasing his talent. Man Utd have failed to live up to that and prior to this season Pogba has been our only outfield player who might get into a World XI with the notable exception of maybe Ibrahimovic. Pogba has stood for the values of the club against Mourinho’s brand of football, saying after a 1-1 draw against Wolves in September 2018 that Man Utd should “attack, attack, attack”; his post match interview last night echoed that.

“The performance today and the past few weeks, they are very good and are the standard of Manchester United. I mean we didn’t win the Premier League I mean that’s the goal. And we didn’t win anything this year so obviously we have to keep working. We still have a lot to do.”

That is leadership. He clearly gets what it is to be a Manchester United player and he clearly has high ambitions and standards for Manchester United. They have been falling short and I can’t honestly blame him for being fed up of carrying players, for being expected to magic up chances to make up for lack of creativity and guile elsewhere. I can’t blame him for being frustrated at strikers in previous seasons needing so many chances to score goals or not having team mates who live up to standards he expects. Wayne Rooney ‘put in a transfer request’ when he thought the club was lacking ambition. Keane himself did not suffer players who did not meet the standards – the difference being Man Utd at that time had players who all agreed the standards, which were epitomised by Fergie himself and upheld by Keane. It’s now a different set up with different people and unquestionably standards have slipped. Pogba repeatedly saying what the ethos at Man Utd is and for sticking up for the standards is showing the leadership you would expect, but he can’t do it alone either.

Thankfully in Maguire and Fernandes we have other players who are not happy with standards slipping, and perhaps even some credit should go to Ole for bringing them back and Pogba does seem to be happier – but I would say that a lot of that is he probably feels like he has team mates who want to win as much as he does. He’s gone from having to carry Fred and Lingard through matches to Matic contributing again, and Fernandes being a class or two above Lingard. I think this is reflected in how the conversation about a contract extension has changed from being “dead cert” he would go to Real to now being likely that he will stay. If you think about your own lives, would you want to sign a contract at a workplace where you do all the work while the rest are happy to clock in, half arse their way through the day and clock out? It’s the difference between being a lone voice against the wind and knowing your mates have your back. Obviously there are other factors at play but I suspect this is the real change for him (not knowing him personally it’s impossible to say categorically).
Daniel (Mings should have had a penalty given against him for handball anyway) Cambridge

Jose is always about not losing and he sets his team up to defend from the first second of the game. If one of his talented players happens to score a goal early, then great. But Jose’s real strategy is that he wants to defend and not concede and then in the last 10 mins of the game, finally take the leash off his team and hope they can steal a goal and a 1-0 win.

I watched this happen for his stint as Man United manager and it was incredibly frustrating to watch. Now Spurs fans have to deal with this ‘strategy’ and it will only end up in tears.
Joe C., Denver, CO

The Champions League draw…
The Champs League draw has given us the right mix of hungry outsiders keeping things interesting and continental dreadnoughts going head-to-head. As such I couldn’t resist dusting down my Grays Sports Almanac to see how it all pans out…

An undercooked Lyon head out, conceding a character-breaking early goal, before conceding two more late on as Dybala, Ronaldo and co put them to the sword in a routine 3-1 victory.

City are given a fright by a much improved Madrid, but ultimately the two away goals prove to be enough in a match where the returning Aguero continues his journey towards match fitness.

Barcelona wheeze through with the second leg in a similar way to the first, despite a promising start and Riqui Puig impressing in his limited minutes. Ter Stegen becomes the hero as the Catalans go through on penalties.

Munich close things out with a slightly lethargic workout against Chelsea. Frank is non-plussed but they’ll be back next season with a better chance.

Atletico gonna Atletico. A one goal victory over Leipzig in a stop-start but surprising entertaining match sees them through.

Despite Atalanta taking an early lead, PSG’s star-studded front-line villains end the fairytale of Bergamo, but suffer a couple of injuries in the process.

Ronaldo isolates and bullies Man City’s rather static defenders, with Dybala dovetailing neatly, seeing Juventus to a slightly undeserved 2-1 win against the run of play.

A much-improved Bayern Munich prove too much for Barcelona as their tired-looking team is put to the sword in a 2-0 win.

Bayern’s pacey attackers prove slightly too much in a messy yet charged game where De Ligt concedes a penalty. Ronaldo gets his goal, but it’s not enough as the Germans deservedly go through to the final on penalties against an exhausted Juve.

Oblak is the hero again. Diego Costa and Icardi trade goals in a dull game where PSG’s injury hit team otherwise struggles to get behind the Atletico defence as a second semi-final goes to penalties.

The Final: Bayern vs Atletico

Exhaustion takes its toll as Munich are unable to reach their previous heights. Joao Felix bags the winner on home turf in a one-nil win as Simeone finally ends their Champions League drought thanks to strong showings from the likes of Partey and Oblak again.
Quarantino Asprilla, Chairman of the Bored, ITFC

A musing on football’s greats
This may be slightly off topic at the moment, but the other night I was lying in bed as all 30-somethings do thinking of football (just me?), and I suddenly tried to firmly conclude who is better; Ronaldo or Messi. My internal discourse spanned the spectrum of records, goals, teams, awards, trophies etc, and determined that it is all a farce. Perhaps we should understand they are both great, and they are merely representing great footballers of certain countries. Yes, their records are ridiculous and they seem to be superhuman but let’s just face it, it’s not a competition, they’re both pretty cool, and serve as Portugal’s and Argentina’s greatest ever respectively. I do not have the pleasure of seeing other greats from years past and football was a bit different before so who is to compare accurately? Therefore I propose a fun game. 3 best ever from each country. That’ll be a fun debate. I admit there is older footballers here which makes me hypocritical but some of these transcend debate i.e. I cannot compare Charlton Eusebio or Pele’s eras correctly, but I am aware of their influence/impact etc but fwiw their regard or gravitas cannot be ignored sometimes.

Out of form…
Are we now living in a world where form has been forgotten as a concept? Is it conceivable to Kit Rickabono (great name, out of form opinions) that Jack Grealish was in great form earlier in the season and is now in poor form? Or does everything either have to be GOAT or A DISGRACE?
Rob BollocksYouDon’tKnowBono

Jack Charlton
I’ve just heard on the news that Jack Charlton has passed away. Apart from Cromwell (and for all together very different reasons) I cannot think of another Englishman who had such an influence on Ireland. Those years between 88 and 94 were brilliant, especially for us growing up here and I don’t believe I’ve ever seen the country as united behind the soccer team since. There is a short piece on TV where the team returns home from Italia 90 where he says “over the last few weeks we trained hard and drank very little, tonight we going to change that”. Queue to roar!. It summed up the whole atmosphere
Farewell good Sir and thank you.
Liam

Next year is our year…
I haven’t actually seen or heard anyone say it yet (not those exact words anyway) but you know it’s there. They’re so close to actually saying it, aren’t they? They want to say it so bad but they know they can’t actually say ‘it’.
Neil. LFC. (To be fair, it actually could be you know.) Exiled in the Valleys.

We need to talk about Inter Milan…
Dear F365,

These are strange times. The pandemic deprived us of our beloved game and hence we were deprived of the various F365 articles and discussions about the game,the leagues and the clubs. As the game resumed we were treated again with all those articles and once again we had something to look forward to every morning.

There were articles on almost every english club,there were articles on spanish clubs,even hertha berlin.  One articles which i was sure  to be found missing was about inter milan. When conte was appointed i remember reading you guys writing a nice piece about how huge this could turn out to be. When inter were actually going toe to toe with juve I vaguely remember reading something about that as well. Since The turn of the year this inter milan side is in a freefall. They seem to be giving a tough fight to Leicester as to who will fuck up more royally. They have journeyed from being equal on points with juve to confortable second place to now sitting in 4th behind both lazio and a wonderful atlanta side(who i won’t bet against finishing second). Something is not going right at inter and i would love it if f365 experts can shed a light on it.

I believe there’s a nice article hidden somewhere there with a lot of interesting stats before and after 2020. But don’t trust me I’m just  a dentist.
Swapnil (Manchester united)

Thank you
Guys and Gals,

It’s been a rough few months, but I just wanted to say thank you for keeping us all entertained throughout the lockdown.  It can’t have been easy, especially when the season was suspended, but I spent approx 2 hours on your site most days, and it really did help pass the time.

To all the commentators, a big shout out too.. it’s good fun on here, informative too..

(MC – Thanks for visiting, Cathal. We appreciate it!)