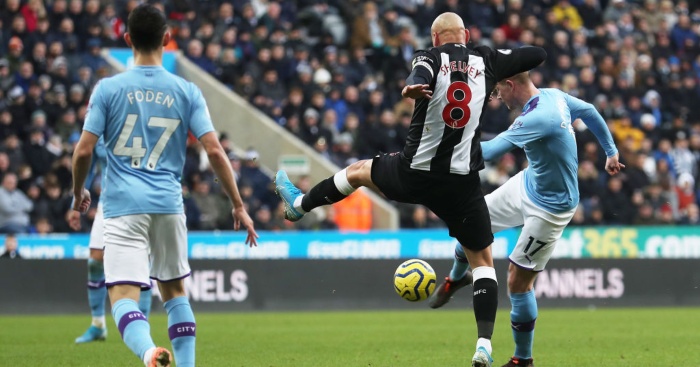 Thanks for your mails. Keep them coming in to theeditor@football365.com…

Goal of the season: Son Heung-Min vs Burnley
Maradona-esque. The sort of pitch-length dribble seldom seen, ever. The type of goal scored as a matter of routine by the best player at school, but almost never happens in the high-stakes professional game, at any level. But in such rarity lies the special nature of such goals.
In this one, almost rebellious act, the ever-beaming Korean distilled big-money, elite-level football into the game we remember in its purest, most concentrated form: one kid, ball at feet, gobbling up the ground, reducing everybody else – teammates, opposition players and goalkeeper – to the role of mere onlookers. Son Heung-Min, playground king.

Goalkeeping howler of the season: Roberto
The hapless Hammer owns this award with a string of blunders to choose from, the pick of which perhaps being the display against Burnley, topped off by punching the ball into his own net. Dodgepot.

Kick in the bollocks (metaphorical): Liverpool.
Absolutely dominated the season from start to premature finish, winning all but two of 29 games and cruising towards the title, on course to smash a shitload of records in the process. Then world events and the ensuing global health crisis conspires to prolong that agonising wait for a league title a little longer. Fate is truly a cruel mistress.

Kick in the bollocks (literal): Maguire vs Batshuayi.
Oof!

Bugbear of the season: VAR.
Specifically, the offside calls against attackers ruled offside by a gnat’s pube after reviews of several minutes looking for reasons to disallow goals already given and, to the naked eye, completely legitimate. Totally against the spirit of the game. Just award the goal if there is no “clear and obvious” error at first sight, for the love of God!

Most Unexpected Performance by a Struggling Team of the season: Watford 3-0 Liverpool.
Where the frig did THAT come from?

Worst hair: Harvey Elliot
Heinous. Should be an arrestable offence.

Signing of the season: Bruno Fernandes.
He’s only been there for five minutes, but the difference between United pre and post-Bruno is night and day. The impact of his arrival on performance levels, spirit and attitude has been stark and staggering. If he’d joined last summer, United might be at least, ooh…third. The anti-Lingard.

Fall from grace of the season: Pep Guardiola.
Lost as many games as newly-promoted Sheffield United and more than Wolves and a deeply disappointing Arsenal. 25 points behind the league leaders. Lost three times to Ole Gunnar Solskjaer. Ouch.

“Carrying a team on his back until it literally breaks” Award: Marcus Rashford.
At least he should be properly fit for the Euros, now it’s all been put back a year. If football ever does resume.

Bastard of the season: Coronavirus.
It couldn’t be anything else, could it? Season-ending, fun-spoiling and life-threatening. Over 1000 people dead now and rising here in the UK. Thousands more dead in mainland Europe and all over the world.
As a Liverpool icon once said back in ’89: “Football is irrelevant now.”

Stay safe, one and all.
Lee, socially distanced

Clubs will be broke if next season is cancelled…
In response to Jay,

Nobody is saying that football should be started before it is safe to do so. All the current contingencies that are being discussed all assumes things are safe by certain months. June 30th is set as the date because its literally the last day of everyone’s contract and is totally a movable target. Besides, we discuss these things because there’s literally almost no other current football topic to talk about, so I’ll happily take the speculation for entertainment.

Also, scrapping next season entirely? Not gonna happen cos clubs need the income. This isnt just a big EPL thing either, there are a lot of smaller clubs in lower leagues that rely a lot on matchday revenue. And of course the EPL relies on that broadcast revenue. Even for some of the big clubs, don’t underestimate the importance of short term liquidity.

And players currently on contracts worth a few years? They’re not gonna take pay cuts if clubs voluntarily choose or vote to suspend a whole season. And I guerentee you under employment law the courts will side with them. There is also the complication of some contracts ending by June 30th making playing this season after that difficult but this is a complication that will likely have to be handled in most scenarios, and not just yours.

So no, they can finish the season then delay next season, award things as it is or even void the season. Unless the pandemic literally makes playing next season impossible because it will last almost a year or more (which is always possible) clubs are not going to be canceling next season – because they’ll be broke.
Yaru, Malaysia

A sea of change in football from now
Hello F365,

I don’t want to sound a total pessimist in the midst of this pandemic, but I wanted to shed some thought on what might happen in football, when it is back up and fully operational….

1) Transfer rumours – players are still being linked with mega money moves – Sancho 100m+ – this is no longer feasible, at least not this summer coming. Will there even be any transfers at all this summer? No club had contingency plans for all the revenue currently lost in the last few weeks (and these future months) – so the days of the 80m+ transfer are going to be over.

2) Player power – they seem to still hold it. There isn’t many talking of helping their clubs with reduced salaries while the season is postponed…. when new contracts are to be discussed – there is probably going to be virus related clauses in them (because this thing won’t be going away fully), and reduced salaries – again because the financial state of football is not going to be the same for a long time after this.

In reply to Jay the Liverpool fan, it does make total sense to finish the 19/20 season, and possibly have 20/21 voided… but I disagree on his thoughts of clubs getting money spinning trips to rebuild revenue. There is an extremely deep global recession on the way – many countries arent going to even think og sp*nking wads of cash on football for a long time until other priorities are sorted!

I guess this is a long winded way of saying, the the obscene money involved in football, may well be coming to an end for a good decade after this. And it may not be such a bad thing to bring it back to reality!
Gary B (No games behind closed doors – clubs will want/need the matchday revenue – in many cases just to survive after this)

Simple solution?
The question of how or whether to finish the season has resurfaced, and I for one cannot fathom why the obvious answer is routinely ignored.

Looking to Wuhan to understand what may happen here, it’s clear that some small semblance of normality will return by the end of May. It’s certain there won’t be any  large gatherings but, believe it or not, it is possible to play football without a crowd. Not desirable, not as much fun, but possible, and there are many precedents of this happening (albeit eerily).

So, let’s play the last eight games behind closed doors in June. Simple.  The season can be done and dusted in good time.

I have read that there are moral objections to restarting the season, but I simply don’t understand them.  Football is an entertainment business, and like other businesses it needs to continue to survive. My company will continue throughout the crisis, as will many others.  Even Ant and Dec were on TV on Saturday night, and I don’t remember any moral outrage.

I realise that this solution is far from ideal but it will work. The season will be finished with winners winning and losers accepting their deserved fate (bad luck Karen). The next season can then start cleanly whenever we’re ready.

Finally, the return of football should be seen as a good thing. It’s more than simply entertainment, for many (myself included) it is part of our social make-up. I’m pretty sure that after eight weeks of isolation a few matches on TV, and the social media arguments that follow, will be a blessed relief. I might even enjoy watching Burnley v Crystal Palace.
Rob

Another XI…
Loving all the distinctive 11s. How about Premier League Best 11 from a traditional non-top 6 club. Thinking that could push for second place this season.

Irritating XI response
I see your XI Adlan, I shall bring my own of players that just irritated the heck out of me, be that during their playing days, their post-career days or just because I do not like them for no reason what so ever, my reasons behind my selections are in brackets;

GK: Thibaut Courtois (As a Chelsea fan, this was the obvious choice)

DEF: Danny Mills (His opinions just get on my nerves)
DEF: Jamie Carragher (The infamous Sky Sports spitting incident and he still kept his job)
DEF: William Gallas (His Arsenal tantrum, His Chelsea “I will score own goals” tantrum)
DEF: Martin Keown (What he did against Ruud was just vile)

MID: Joey Barton (No reason required)
MID: James McClean (I don’t think anyone likes him, always in the news for the wrong reasons)
MID: Stephen Hunt (What he did against Petr Cech)
MID: Ryan Giggs (Off the field antics)

FWD: El Hadji Diouf (No one likes someone who spits at someone)
FWD: Luis Suarez (Three Bites in his career, plus THAT handball to deny Ghana a place in the World Cup Semi Final)

Manager: Jose Mourinho 15/16 Season onwards (Greatest Chelsea manager, yes, but how he was toward Eva Carneiro was when my views changed)

Not a player, but is it just me who cannot stand Martin Samuel from The Sun?
Mikey, CFC