Home Mailbox Where the season went wrong for Liverpool, and more mails… 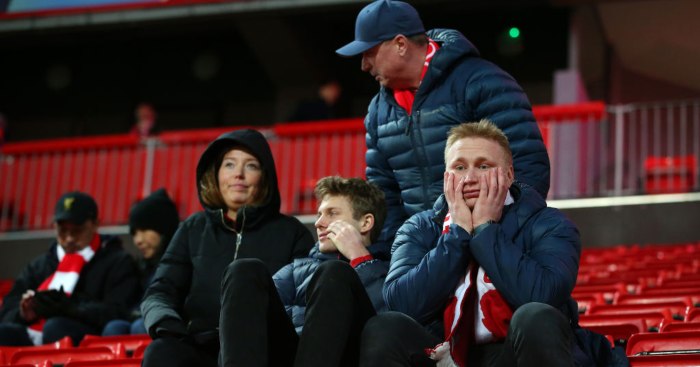 Get all your thoughts in to theeditor@football365.com ahead of a fresh week of Mailboxes…

It’s an uncomfortable reality
I’ve been struggling to put this into a cohesive paragraph or so, but finally the cognoscenti of football are all agreeing that playing games “behind closed doors” defeats the purpose – what is a game without the fans?

At last. Finally. Yes, you can have your leagues, your championships, your Euros, your Sud Americas, your World Cup and sell the rights for bazillions of dollars. You can have your noodle sponsors, official tractors, car companies on your shirts – those cars you can’t buy in your own country. You can sell, sell, sell. You can skin the fans for shirts, for away shirts, for third shirts, for cup shirts.

And then – there are no fans in the stadium, and suddenly there’s a pin dropping. And maybe a penny dropping? “You can’t have games in empty stadiums, you can’t have games behind closed doors – it’s the fans that make the atmosphere!!!!”

Finally. The game is about the fans. How long did this take?

That’s why in an idiotic way I renew my membership to Chelsea Football Club each year. I tell myself that there’s a fan at the game who is cheering on my behalf. Vicarious, I know, but better than nothing. I can’t really fly 6,000 miles each way on a Saturday, but I’m there in spirit. Now there’s no-one there. And when there’s no-one there, there’s no game, so no sponsorship, no noodle fees, no TV rights, no shirts to sell. The whole economic model collapses. And it’s taken just two weeks for the awful realization to kick in.

Finish the season behind closed doors?

Where the season went wrong for Liverpool…
With the recent postponement of the PL until May at the earliest now, along with other sports following suit, and the now surreal state everyone is currently living in, it has got me thinking about a number of things relating to Liverpool this season.As a disclaimer I am a fan young enough to have never seen Liverpool lift the league trophy.

Largely this is related to the acceptance and realisation that there is a strong likelihood of this season being declared null and void. With it this brings mixed feelings. There is the utter disappointment of having the league taken away when we’re so close to winning it (6 POINTS!!) and yes, if at the start of the season any Liverpool fan was given the option of winning the league then they would have taken it there and then. The mixed feeling comes in with the fact that it allows us to once again become the defending champions for the CL, and the possibility of becoming back to back champions, as comes back the chance to compete in the domestic cups.

This is where the greediness comes in, as yes, the league should be enough. But the problem is, is that I bought into the hype, the hype that the treble was on and that the Invincibles was still a possibility. The hype created by F365 with their articles dubbed “22 records Liverpool could still break”. But it’s more the fact that, yes, after so long just winning the league should be good enough, and it is. It’s just that want to win it in style that would always have made it that bit sweeter.

This comes on to my final point, which is pointing out where the season went wrong for Liverpool, which was the winter break. Clearly after the winter break, Liverpool did not come back the same way they had gone in (and yes, the Shrewsbury game before the break did show the signs of a struggle starting). But, after the break, it really started to look different, with the West Ham and Norwich games both wins despite poor performances, while the Chelsea and Atletico games were big wake up calls (and the performance for 90 mins in the Anfield 2nd leg was the best performance (ignoring an Oblak masterclass) since the 4-0 win against Leicester). This comes into question that 2 weeks, and what would have been without it, whether the extra game would have meant the title was wrapped up by now (6 points needed currently for the title, so work it out as 3 points won against the opponent on rest weekend, and then 3 points gained against Watford if we say there is no post-break dip). If we also say no post-break dip, then that also means a good performance and win against Chelsea and a win for the CL R16.

So, basically, that’s a long way of saying I’m conflicted and confused about the indefinite postponement of football and the still uneasy feeling about what would’ve happened with no winter break.
SM (for the record, away goals shouldn’t count in extra time, and it was Lampard’s goal vs Germany that still haunts me as the worst referee/officiating mistake)

Give it a rest Red Nev
I and my family and the rest of sunny Switzerland are in virtual lockdown . Schools have been shut for over a week , everybody is fractious but thankfully no one in my family is ill , although a few friends locally have symptoms at the very least.

Turning on the TV is a harrowing and macabre journey. Sky news is my channel of choice mainly because Adam Bolton will actually let his video guests and experts talk rather than some early morning TV interviewers who just shout everybody down ( you know who you are)  Everyone becomes grotesquely fascinated by the latest infection numbers and mortality rates and after awhile you have to switch off for your own mental health sake.

So seeing the debate on last night I thought I’d tune in to hear the views of Carragher and Neville basis the decision to suspend football further. A welcome distraction from every other news channel.

Yet the Neviller then took to the airwaves and used them as a platform to directly challenge / criticize the prime minister personally. He stated that the chancellor was doing a good job ( the PM would be involved in theses decisions Gary) but Boris was basically useless and showing a distinct lack of leadership.

Now I think we can all agree that some of the decisions from the government have been well muddled. However I don’t think Boris is just making his response up as he goes along, even if he was then fair enough as this virus is something that none of us have ever experienced and hopefully won’t do again. So what is the correct response ,? in this scenario the government is dammed if they do and dammed if they don’t. Clearly decisions being made will be proven in hindsight to be wrong.

The Neviller now seems to have taken on a new role as “ voice of the people” or rather his own ego. Whoever was PM currently is facing arguably the greatest challenge since WW2 , yet in an age where society has become rightly more concerned about mental health , the Neviller directly calls out Boris personally. Funnily enough making life and death decisions are a little more important than commentating on a football match . I do appreciate red nev’s gesture with his hotel and providing beds for NHS staff but it doesn’t fit with his attack dog persona.

I thought the point of all this was to be kind , considerate and hopefully we all come out of this a little wiser and hopefully healthy. Bullying individuals directly is not a good look , and I for one wouldn’t wish the PMs job on anyone right now whatever your own personal politics are
DL , LFC ( eerily quiet) Geneva

Gary Neville has opened up his 2 hotels to house NHS staff, while also promising to keep his staff employed.

As someone who lost their job, I respect those employers that don’t f*ck with their staff in this time of crisis. Many employers do not follow Gary’s lead (see the Hotel in Scotland that made staff homeless in addition to making them redundant).

As for his criticism of Boris, compared to nearly every other country in Europe, Britain has been extremely slow to react. My brother, a teacher, has been obliged to continue teaching up until this weekend, whereas schools have been closed on the mainland for a couple of weeks now.

In my opinion, the UK government deserves criticism of their handling of the crisis. In France, we are baffled by the fact that Brits are not in mandatory confinement (maybe that’s jealousy talking) and that bars have ONLY JUST been told to shut! Ridiculous.

Gary Neville is responding to the crisis in exactly the right way, as opposed to the silly privileged A-listers singing f*cking John Lennon
Barney (worried that confinement will last 3 months or more)

By the logic that Gary Neville shouldn’t criticise Boris Johnson’s leadership because things went bad when he was in charge at Valencia, should we just go ahead and make Boris Johnson the new manager of Liverpool?

I mean they are interchangeable positions right?
Nathan, Newark

Here’s a question: who are some international players who you have a big old crush on despite them never being brilliant. You know, the work horse, the ultra loyal worker who never pulled out of a friendly. As an Irishman, top of my list is Kevin Kilbane. Born in England but always wanted to play for the Boys in Green. Turned up more than 100 times and worked his bollocks off every time. Jonnie Walters is a more recent example. Limited but strong as on ox and ran himself into the ground. Kevin Doyle, ditto. Going further back we could mention Matt Holland and Mark Kinsella, the midfield that got us so far in the World Cup 2002. Robbie Keane is another. Obviously Robbie was a top player so I’m already disregarding my own criteria but whatever. What I loved most about him was celebrating every goal like it was the most important in his career á la Inzaghi.

And who could forget the man, the myth, the player we all dream of, Gary Breen. Kept the great Raúl in his pocket in the previously mentioned world cup while without a club!

So guys, who are your picks?
Alan, in quarantine in Córdoba