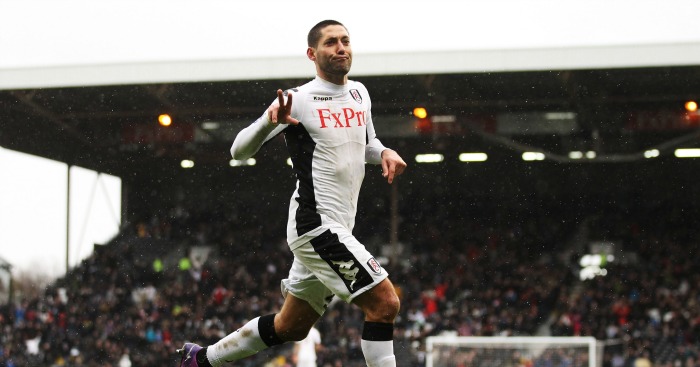 Thanks for your emails. Keep your various different XIs and quizzes and games and Six Degrees efforts coming to theeditor@football365.com

More One Per Club XIs
Long time lurker, first time mailer. I would like to thank Rick for further reaching into the barrel and plucking out yet another creative exercise that stimulates thought and discussion during these uncertain times.

I’ve gone for a mobile and resolute backline, I’m banking on Leno stopping some shots if they get stretched wide.  My CDMs cover a lot of ground and are strong in the tackle.  I’m hoping they can lay off quickly to a very creative partnership in the heart of midfield.  I’ve gone for guile, trickery and blistering pace in the front three.  If you play a high line against this team, you’re f*d.  If you set up a deep block…well, it’s quite possible we’re f*d.

RB: Pereria (Leicester) – have to agree with F365 which recently said Pereria was the better FB when compared to Chilwell, so he comes in for his Leicester team mate

CB: Maguire (Manchester United) – Has won me over this season. Thought it was a huge waste of money to sign him, and while it was undoubtably an inflated price, he has been very strong since he has acclimatised to the team

LB: Digne (Everton) – not the best in the division, but very capable, and comes from a team that doesn’t have many other first team options for this side

DM: Moutinho (Wolves) – a real shame he didn’t come to England earlier, the type of player you are almost obliged compare to a Rolls Royce

DM: Kante (Chelsea) – not his best season, although taking one of the best defensive midfielders in the world and moving them around the side probably hasn’t helped

LW: Grealish (Aston Villa) – not sure this is his best position but wanted to get him in the side. Would be interesting to see how good he could be with better players around him

AM: De Bruyne (Man City) – best player in the league, if City had a defence as good as him they would have actually challenged Liverpool this season

RW: Son (Spurs) – will basically be excellent about 95% of the time, so in he goes

CF: Aubameyang (Arsenal) – a class act, and would guarantee goals with the creativity behind him

Pretty decent side, very solid defensively and with enough brilliance up front to trouble most sides. No place for anyone from Bournemouth or Palace, with Ayew a bit unlucky to not make the cut.
Jack (Almost had Ings as my frontline striker, until I realised I didn’t have anyone from Arsenal) Manchester

Six degrees of Kluivert + bonus Spursy XI
As soon as I saw this one, I didn’t care about getting there in the shortest number of moves; I knew the only way to go would be through the other Ajax father/son combo of Danny and Daley Blind!! So here goes:

Paolo Tramezzani (without doubt the worst Spurs player in my lifetime!!)

…I believe this works…

There may be quicker ways to get from one to the other, but there’s something particularly pleasing about this way (if it checks out)
Ned Wall

Banks to Pickford
Cheers, Will Padmore – this one was probably the hardest yet and almost had me stumped! I had to use the full 5 footballers and a lot of wikipedia/transfermarkt, but here we go:

I never thought I’d say it, but thank the stars for Roy Carroll! Here’s one slightly different for people: Can they get from Alf Ramsey (Manager) to Jurgen Klopp (Manager) using 5 players they’ve managed? Should be tricky!
Lee (that definitely killed an hour), LFC

All American Premier League XI
Shockingly, this team could give the Welsh and Scots a run for their money.

Absolutely loaded at this position, but Big Bald Brad and his bizarre half-English accent is the choice from a equally bald-headed group featuring Kasey Keller, Tim Howard, Brad Guzan, and Marcus Hahnemann.

Slight-statured Beasley will still be getting USMNT caps into his 50s. Scored three goals for City on loan from PSV.

Slim pickings at center back. Cameron was a steady presence in the famously stingy Pulis-ball Stoke squads.

Gets a lot of crap from pundits for his somewhat unorthodox, rough-around-the-edges style, still room on this team for one of the fastest players in PL history. Burst onto the scene against Belgium in the World Cup. Saved Sunderland from relegation with an assist on the final day (they were relegated the season after he left), went to Newcastle and they were promoted in their first season. Almost seems forever ago that Spurs had Walker, Trippier, and Yedlin all on the same squad.

Stu Holden could’ve held this spot had a series of major injures not curtailed his promising career, Harkes gets credit for being the first American to play in the PL, the second American to score at Wembley, and the first American to play in a major English cup final (1991 League Cup). Sent in the cross that Andres Escobar infamously put into his own net for Colombia. Also, no team would be completely without a man who was accused (and later confirmed) to be sleeping with his teammates missus.

Along with Holden, spent a lot of time in the training room, but he is the best pure central midfielder the US has ever produced. His son Gio is featuring for Dortmund at age 17 and may join this group soon.

Arguably the most naturally gifted American player ever with an endearing trash-talking mean streak about him. Scored the most famous American goal in Europe ever against Juventus. Bruce Arena summed up what makes him special perfectly: “He tries sh**.” Honorable mention to Preki who scored a famous goal in a 1-0 USMNT win over Brazil.

Landycakes was never the most athletic or graceful player but always came through in big moments. His legendary exploits for the national team give him the edge over steady Eddie Lewis.

First to score a hat-trick in the Premier League. Scored more goals in a half than Jozy Altidore scored in two seasons.

Gets the nod over Roy Wegerle and Joe-Max Moore, the midwestern epitome of the hard-working, good-looking All-American boy with a heart of gold and a head of iron. The sight of him in world cup coming back on after a vicious elbow courtesy of Daniele de Rossi still brings a tear to the eye. Recently elected General Manager of the USSF to clean out the riff-raff.
John, Los Angeles

Another Niche XI
Here’s a relatively niche XI:  Players Who Never Won the World Cup but Lost in The Final:

I’m sure someone could make an equally great XI with players I’ve left out, the likes of Seeler, Haan, Rummenigge and er Junior Baiano.
Matthew, Belfast

Taking the Biscan
Re Rob’s Worst LFC XI ever, absolutely not re Igor Biscan. He was genuinely decent, just continually played out of position by Houllier. Very fond memories of some big performances playing in midfield en route to Istanbul. Broadly agree with the rest, though how El Hadji Diouf hasn’t made the team I dont know. He was total sh*t, plus a complete weapon. Dreadful signing.
Jack Flaussen

Lollipops
So with the UK in lockdown and no football on our screens, YouTube is becoming a great place to feed our urges (now available in 360p, feels like the early 2000s), anyway Sky uploaded the other day The Best Showboats in Premier League History.

On said video is a fair amount from Adel Taarabt during his Spurs and QPR days, in one clip he manages to nutmeg a defender and cause teammate Anthony Gardner to give the best reaction I think I have seen in recent memory, so this brought me to this question: who is a player that could always have a trick or two in his locker, that would make you go wow but overall was considered kind of a bit crap?
Mikey, CFC