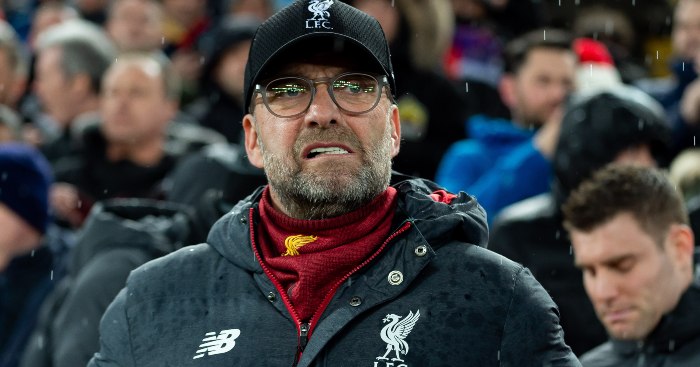 Surely this whole debate is on the likely delusional premise that next season will happen? Why not right off next season and finish this one as and when it’s reasonably safe to do so with crowds, maybe even restart at the same time next year as it finished this year. In the meantime wait for an appropriate time to get something going, likely behind closed doors and get imaginative, concocting bespoke Covid year tournaments, possibly regional leagues/cups. Might even be a good opportunity to experiment with different formats/rules…
James, Bristol

…Responding to Jon Nic’s article, as I’m sure we’re required to do, I can see both pros and cons but unfortunate John has widely missed the mark.

Each of John’s first five cons are questionable:

1) Football without a crowd may not have the atmosphere but the easy solution is to turn off the sound on your TV. Instead of the sterile environment you can enjoy the quality of the football while listening to other things. I’ve done this many times when in a busy lounge and thoroughly enjoyed it.

3) This is pure conjecture. There is no evidence to suggest the novelty of watching football will wear off. I have watched games when away on business between two teams I’ve never heard of as an alternative to rubbish TV.

4) Take a quick look at the table. With City banned from the Champions League, Palace in eleventh, level on points with Burnley, are only 6 points off a qualifying position, and with every team from 15th down in danger of relegation, there will be few meaningless games.

5) Why will the whole schedule derail with one positive test? Most of the country will be working in June, in pretty sure we’re more resilient than that. Every winter when there’s a flu outbreak it kills approximately 40,000 people. We don’t stop when someone sneezes in the crowd.

You’ve probably guessed that I’m in the pro camp. Putting everything else aside I think it’ll be good for the mental health of a significant number of people.
Rob

Lock them up
Is anyone else even a tiny bit excited at the prospect of watching football without fans? I think it’s intriguing. Granted there won’t be the added comfort or advantage of home support but with the games potentially being held at neutral venues I imagine it’ll be somewhat surreal for players anyway. Listening to the communications between players, hearing the actual leaders on the pitch, the orders being barked from the side – what’s not to like?

Speaking of the players, fully understand the worry and hesitancy shown by some in being rushed back onto a football pitch but I disagree that this is solely for people’s entertainment. This is their profession and their livelihood, and if there’s a risk that their football club could face severe financial difficulty then these guys should be working to prevent that. Why not lock teams and their staff etc down for 4-6 weeks and get the games finished? Like in a World Cup scenario for instance. Didn’t Capello prevent players from seeing WAGs, families, etc during one WC campaign – would this really be any different?

Project Rethink
The problem I have with ‘Project Restart’ is the name itself. Yes, of course we will need to restart at some point in time in the future. But only when everyone is ready – players, officials, club staff and supporters. Their health and safety is paramount.

The focus of Project Restart seems to be on finding any way possible to start our game again with little or no consideration for fundamental issues that will continue to blight the sport. We all know there is too much money at the top, clubs are in thrall to TV companies and European/World competitions are run by self-serving organisations who are prone to skulduggery. There is now a great threat of smaller clubs going bankrupt and the game itself could wither and die without some drastic action.

We should use this time wisely as an opportunity to reevaluate the game at home and abroad. What sort of game do we want? Is so much football really necessary? How should clubs be run and should there be spending/wage limits? How do we plan for future stoppages? How do we ensure the survival of lower league and grassroots football?

Football will be back – but is football in empty neutral stadiums what we really want? The world has changed and football needs to adapt. ‘Project Rethink’ would be a more appropriate name for what the game needs.

…Yay, another article by Johnny Nic about football and its relationship with money. For any fans of father Ted, my quick response.

Next up, Jeremy Corbyn’s “Project Capitalism: Does it really work?”

I get it. I advocate it. The PL probably won’t, and probably shouldn’t restart this season. But prizes and places have to be awarded, UEFA have stipulated that, and it will do much more damage to the integrity of the Premier League if we kick off the next campaign, knowing that there will probably be another spike in deaths and lock down at some point next winter, without being sure if any of it really counts. Then we truly have reached Groundhog Day.

If I have indeed misread the mood, and people are interested in Johnny Nic’s take on things, then he has written a few books. I bought one once, and they genuinely make the prose of Steve Bruce look like Charles Dickens. To avoid nasty surprises, please be aware that he does request payment in money rather than buttons.
Adam, LFC

Bring on the sportswashing
All this talk of the financial difficulties facing football during lockdown has got me thinking about financial fair play and foreign investment.

With clubs facing a third month without gate revenue and facing the prospect of giving back TV money, there is surely no option but to relax FFP rules?

To expand on this point further, could the likes of the Saudi Arabia buyout of Newcastle actually benefit the game in its current predicament? A big 300m transfer splurge straight out of the pockets of the Saudis, along with big spending from the likes of PSG, Chelsea and Man City’s owners would provide a big injection of outside cash into the game that could kickstart the transfer merry-go-round and filter its way through to smaller clubs.

Could ‘sportswashing’ inadvertently save our game?

Reds reminder
We all know there will be huge amounts of revisionism from certain quarters if Liverpool either get ‘awarded’ the title if it can’t finish, or win it in whatever format they are able to put together. There will be Asterisks everywhere.

This total denial would have happened anyway, even if the season hadn’t been interrupted. We have had luck, VAR conspiracy, sh*te league (city??) suggestions thrown at us already.

So just a reminder how ridiculously good they have been. 27 out of 29 wins. Most points ever in EPL history at this stage (possibly ever?) On the back of a 97 point season and current European and World Champions.

Personally I am praying for the day I can watch the Reds in person again but unfortunately that’s a way off. The leagues will need to find the safest way possible to continue as best they can in the meantime otherwise there won’t be a game to come back to.

Winter break regrets
I concur with Micki’s suggestion in yesterday’s mailbox that Watford’s win vs Liverpool was one of the most important results in Premier League history (or words to that affect), which brings me to something that has been rather lost in the ether due to covid-10 suspending the season.

Klopp was a vocal advocate of the winter break, to the extent that his thoughts probably held some influence in the Premier League introducing a mini-break this season. Well, it’s kind of ironic then isn’t it, that Liverpool may well have had the league wrapped up before the “to void or not” questions began without the winter break that apparently was needed for the physical well-being of the players?
Brian, Wexford

Sticking up for Pele
Fair enough of Stu in Bromley not to have Pele in his top 5. Strange that he seems so angry about it though.

I mean, to have won 3 world cups is quite an achievement. Not really sure why being surrounded by good players is a negative though? I mean, let’s look at the other 5, it’s not as if they won anything with Accrington Stanley, is it?

If the argument is that he never tested himself, so therefore can’t be one of the best, I would have to say that winning 3 world cups probably, just, just, counts as a test. Yes we’ll never know what might have been had he played in a great European side, but then wait, would that have counted? Surely he would need to play for a terrible European side for this to count. Like Ronaldo did (Barca, Inter, Real Madrid, Milan). In short, you can have your top five, but your logic to exclude Pele – nonsense.

Oh and also – ‘The only elite player to have played at the highest level across three different leagues with the (arguably) three biggest teams in each league .. Utd, real and Juve. Who does that?’. Clarence Seedorf won the league title and Champions league with Ajax, Real Madrid and Milan. So, you know. Him.

Dead to us
Kildare, Ireland wants to hear about players who moved clubs and by doing so tarnished their reputation, the love and the respect from the fans.

Thibaut Courtois – Chelsea & Atletico to Real Madrid (The way he engineered the move was the reason behind the dislike, plus Atletico dislike Real, simple)

Fabian Delph – Villa to Man City (we all remember the famous statement, he isn’t leaving and the leaves a few days later)

Ashley Cole and William Gallas – Chelsea To Arsenal vice versa (Gallas said he would score own goals, and Cole was disliked for moving due to money and being tapped up)

More fool them, I know. But that’s why.
Steve, Los Angeles