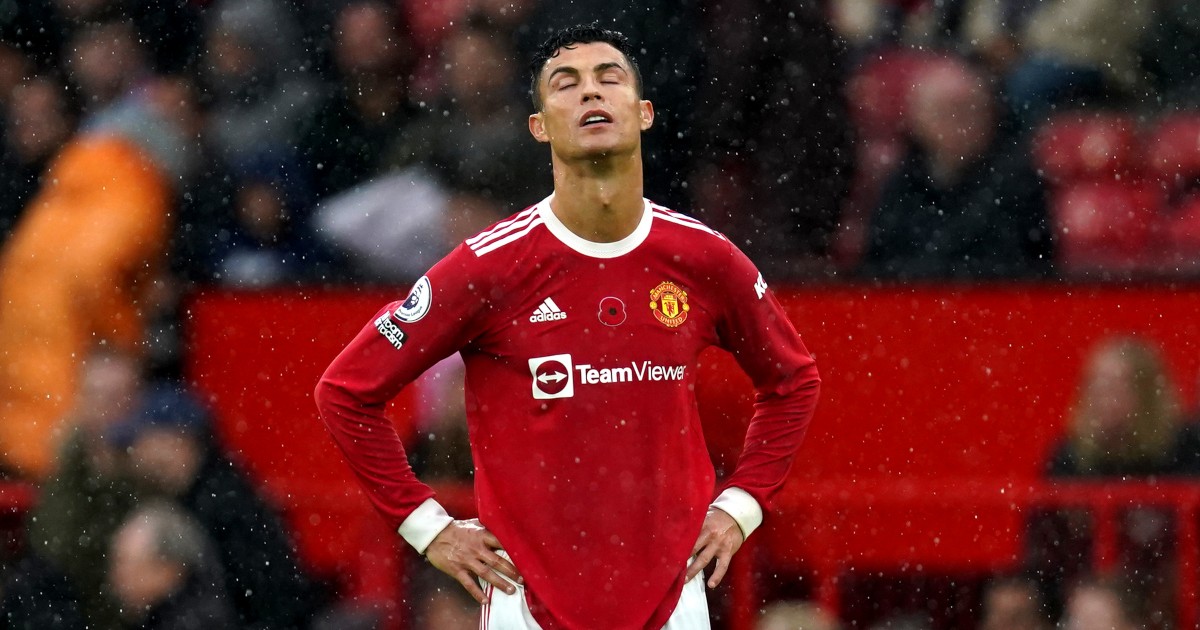 Manchester United have appointed Ralf Rangnick as interim manager because he won’t be worried to actually manage Cristiano Ronaldo properly.

Ballon d’Or b*llocks
I knew Twitter would be absolute chaos with Messi winning the Ballon d’Or. Let’s be honest, the Ballon d’Or is always decided by either May or July. This is because the CL winner or the winners of an international tournament determine who wins usually. Lewandowski had a better year than Messi in terms of goal scoring for sure but I genuinely think Messi was ahead in most other metrics. They should have really given Lewandowski his award last year because it was obvious everyone would be outraged. 2020 and 2021 are two different years. Lewandowski was the best player in the world without doubt in 2020. This year it was tighter. I knew Messi had it won back in July because of how he carried Argentina to the Copa America. His performances for Barca in this calendar year were also insane. He was the best player in his league and the best player at an international tournament.
Dion, Arsenal.

They’ve really gone and taken the p*ss this time. Messi is one of the greatest, it’s an inarguable fact. But how on earth have they awarded the Ballon d’Or to him over Lewandowski?! League stats compared: Messi – 25 in 33 appearances, Lewandowski 41 in 29 appearances.  Champions League, both have 5.  Messi scored 8 for Argentina (4 in 7 games at Copa America), Lewandowski scored 3 in 3 appearances at Euro 2020.

I understand that even compared to La Liga, the Bundesliga is less competitive (basically a one team league at the top) but how can you deny the individual brilliance and achievement of Lewandowski.  It boggles the mind.
Paul (LFC) Maryland, USA

Ronaldo signing not about goals
This debate about Ronaldo continues, it seems. Fitting him in effectively remains a conundrum. But picking up something from the comments here and elsewhere, let me just say he wasn’t brought in to score goals. With Rashford, Greenwood, Sancho and Cavani, as well as Bruno and Lingard, the side didn’t lack for goals.

He was bought because the powers that be knew it would be a PR nightmare for him to sign for someone else – especially the local rivals – and believed it would give a boost to the squad. They also knew it would give them some protection from a loud percentage of the fanbase who would cream themselves. And the media who would melt about big homecomings, and overlook all his negatives.

It will have a huge positive effect on the squad in terms of professionalism and he may well have called out some of the amateurish way some things were being done (or just not his way). For the youth players there is no better role model for dedication. But his signing cost Ole his job, for good or bad; he unsettled a fairly happy squad, he undermined the manager and undermined his tactics by not offering the running it was built on. No one doubts his ability to score, but he wouldn’t work in the Liverpool, Chelsea or City squads for the same reason.

Cavani and Greenwood would have scored plenty, with the latter having a proper chance to grow as was intended. They wouldn’t have finished every chance Ronaldo does or can because he is next level, but they work hard for the team which is arguably more valuable overall.

I’m of the view that this has been noted, maybe in an exit interview with Ole, so they have appointed someone who is bigger than him and with the balls to make him know it. Not a bigger name, but someone who is moving up in 6 months, not being removed if Ronaldo doesn’t like them.

For me, the most interesting thing will be what happens to Pogba.
Badwolf

Ralf’s at the wheel
It was pretty amusing that Dave, nowhere, decided Ralf Rangnick was a nobody because he has never heard of him and then when it was pointed out who he was, decides to denigrate as learned from ESPN, Sky, etc. Odd to pick out ESPN, who I wouldn’t have placed as a paragon of football – or should I say soccer – expertise and watch or read nothing from either.

Besides the excellent point made by Dave, Dublin, just to point out that football has become a sport that straddles the globe – just look at the locations of many of the letters to F365. There are many excellent writers from beyond Salford, that regularly discuss all things football, including managers and coaches who are evolving the game. It is so easy to broaden our understanding of the game, and those who are changing it, than it was before Wenger came to the EPL, but no excuses today.

Jonathan Wilson, who is an excellent writer albeit boring to listen to, wrote one of the best books I’ve read on the evolution of football tactics, citing the coaches who have changed the game – Inverting the Pyramid –  and completely updated the book on 2018 specifically to include a section on Ralf Rangnick and Gegenpressing. And you would have to not follow any European football to have missed his name come up every time Salzburg or Leipzig played in the CL – especially if against a Liverpool – mentioning the style played by Klopp being influenced by Rangnick who had essentially built those clubs up.

It will be interesting to see how he impacts United as he is clearly his own man who doesn’t brook with not following his requirements to the letter. But he is a club builder and if he stays beyond the interim role, United will be better off. It will take time to learn whatever system he puts in place, and the players will have no excuse that the coaching isn’t clear. Whether they can execute it or can’t be bothered to execute it – looking at Ronaldo and Pogba – will be another story.
Paul McDevitt

Like many UK based fans, I wasn’t actually particularly aware of Rangnick, or his impact on German football. Reading his Wikipedia page it’s clear he’s had quite a lot of success with attack focused football, followed by some strangely swift exits (maybe his job was done?). I have no doubt his appointment will be an on-field success, and his follow up position will be the important bit – anyone who can crowbar Woodward out of the recruitment picture is a godsend.

But something in this excerpt seems to make sense of his appointment by the Glazers. I’ll leave you to make your own judgement:

“Rangnick joined Red Bull as director of football in 2012, helping oversee their expansion into European football, emphasising the recruitment of unproven players and developing youth systems with a worldwide scouting base and an attacking on-pitch philosophy across their clubs. As a result, Red Bull clubs rose in market value from €120 million to €1.2 billion during his tenure.” [Credit, Wikipedia]
Badwolf

In good ‘nick
Just thought I would add my bit to the ‘Ralf Ragnick? Who is he?’ debate.

Having had the dodgy joy of being a Hertha Berlin season ticket holder for 6 years back around when Ralf was de rigueur in the Bundesliga, here are my 2 cents. Ragnick is very much a project guy and is more interested in building a club than just managing for the sake of it. When Hoffenheim came along and offered him a job in non league football with the end goal of getting to the Bundesliga he jumped at it and was heavily instrumental in what was essentially taking a pub team to the top of the league with a big bag of cash. This was after he finished runner up with the eternal house fire that is Schalke, so maybe the equivalent of Poch joining Salford after leaving Spurs.

He then was happy to jump over to another dark side and was integral in the RB projects, again helping to build their mini death stars from the ground up. Not sure what energy he has left at this stage but in the past was one of those guys that gave every last bit of his 100%, to the extent that he left Schalke the second time citing fatigue and health reasons (eternal house fires probably do that to you).

One thing, though, is he demands a fair bit of control and is confrontational so it will be interesting / fun to see how that plays out with the suits at Man U who seem to like rubbing shoulders with the limelight. Overall I reckon this is a good move for Man U, a lot will depend on who they put in as full time manager. Takes a fair ego to manage a club of their stature which could lead to some fireworks with Ragnick as director of football.
Mel – Berlin, Brussels, Athlone Town
p.s. slightly revisionist to say big Jack invented gegenpressing

Interesting times ahead for Manchester United. Ragnick is a really smart appointment. He has experience of rebuilding clubs and it will be difficult to find someone better for the role.

However, the only challenge in his way is MANCHESTER UNITED itself. The club needs continuous marketing and big money signings because that is what brings the sponsors, sells T-shirts in Asia and keeps them in the news. Manchester United can afford big transfer mistakes. They have a lot of money and they can sign another big name to replace it. They, however, cannot afford to stay out of conversations while trying to silently build the team. They are like a giant which needs to be continuously fed.

Liverpool were a completely different situation. We were underperforming on the pitch but were really poor in marketing. FSG could afford patience as there was not too much to lose then. Manchester United does not have that luxury. They also have Chelsea, Manchester City and Liverpool competing for the same market. Newcastle United is likely to shake up the transfer market completely. Like I said, interesting times ahead…
Dushyant Jamwal, LFC, Dubai

Why sack Bielsa?
In response to mails/comments as to why Bielsa isn’t being talked of as being sacked (and why its madness to sack him) I can think of a few reasons:

1. He got a Championship-level team promoted as champions and finished 9th, including wins at Man City and Leicester and bloodying the noses of the top six (none of them beat us at home). We still have a largely Championship-level squad.

2. We have had a shocking injury record this year. Yes we could have bought more players in the summer but Bielsa likes a small squad. Our small squad performed well last year and we will improve when Bamford and Ayling return.

3. Who do you get to replace to him? We have had every type of manager since 2004. Unless there is someone better than Bielsa, I don’t want him.

4. He’s obviously flawed in some senses but his commitment to improving players and giving them a chance is great and better (in some ways) than splashing the cash on players he wouldn’t want.

5. Pep, Poch and Simeone respect him. Irrelevant but makes me happy that we finally have a great manager after so long.
Tom, leeds fan in Newcastle.

Robert De Keano
Roy Keane the pundit is like the last 25 years of Robert De Niro. From Meet the Parents to Anaylze This and all the in-betweens since, he has become a caricature of what made him famous. It was funny at first, then people stopped paying attention and after that, a whole generation of people didn’t realize that there was a 70s and 80s version of the actor that came before and was considered to be among the greatest of his profession.

Roy Keane is poking fun at himself without even knowing it. Or, he knows it and happily caters to the paycheque. It’s all so forgettable and regrettable in the end.