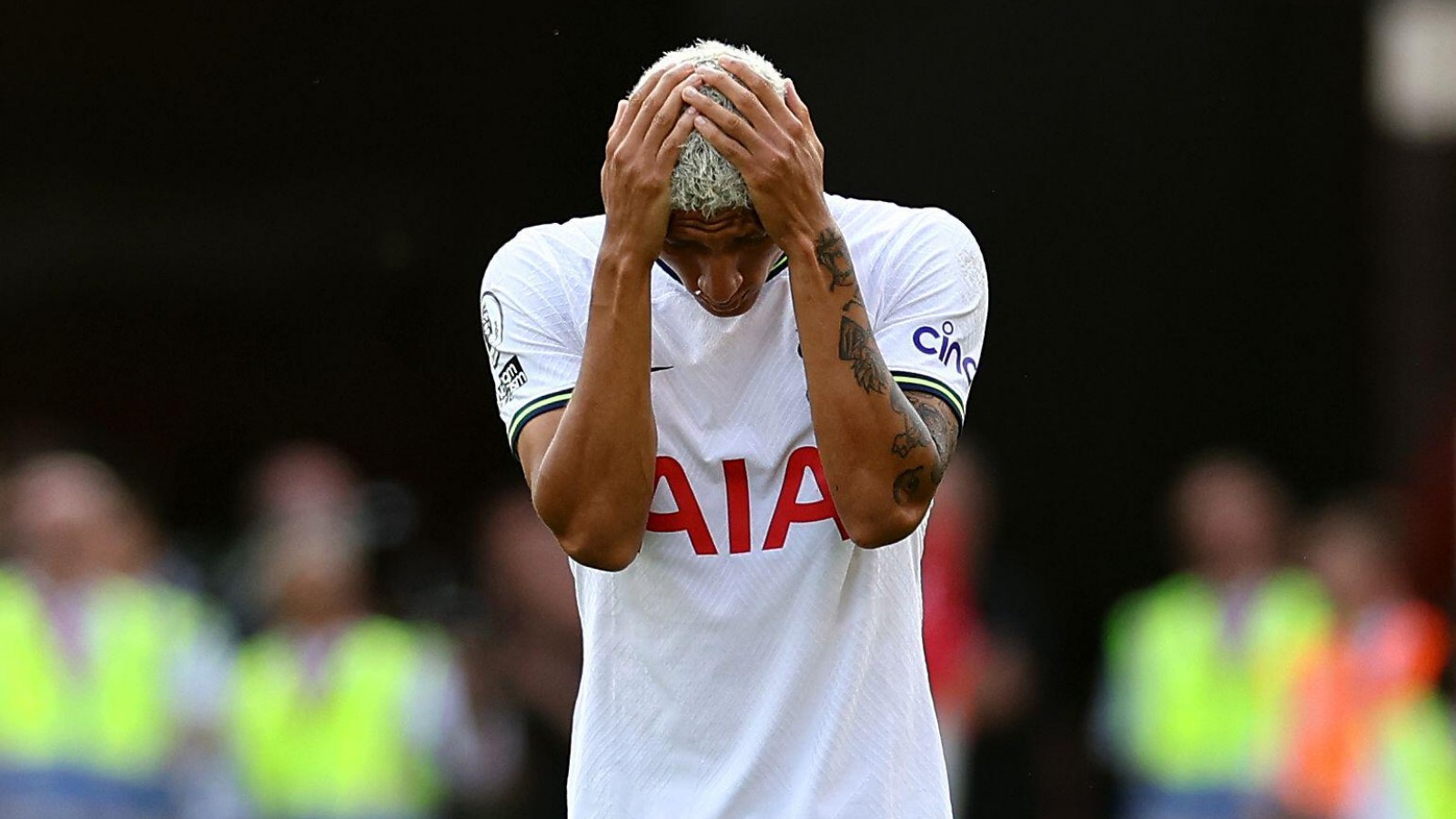 If I was a Rich girl
As a Forest fan I honestly don’t get the level of pearl clutching about Richarlison, including from Cooper. It’s the kind of niggle and attitude Spurs have been missing for years. Seen far worse in Forest – Derby games down the years.

That said the email calling for Brennan’s assault is the same of pearl clutching, just from the opposite angle. Richarlison was taking the piss, Brennan left one on him, Neco pretended to accidentally fall on him, everyone got up and carried on. Suggest a lot of people do the same honestly.
James

I don’t support Spurs or Forest. I thought Richarlison juggling the ball was no different to any other player using their skill to retain possession and I also thought Brennan Johnson was lucky not to be sent off but arrested for assault? Jesus Christ some people take football too seriously don’t they
Sam, Newtownabbey

Just wanted to add a brief thought on the Richarlison incident – why does anyone care about this?

Spurs fans like myself enjoyed the skills/timewasting/shithousery, and surely all other fans and PFM’s enjoyed a fancy-dan Brazillian getting clattered for it!

The view from Bournemouth
I’ll be honest, I thought once he made it through yesterday he’d be ok.  Shows what I know.

Scott Parker is clearly an interesting individual, viewed through the lens of a fan he doesn’t always come across as the most self-aware and is now dealing with the consequences of not thinking through what he says.

I suspect he is a natural introvert who isn’t really that comfortable in the limelight, although his £4k suits resembling those blood pressure monitors they give you at the doctors’ might contradict this.

I didn’t go on Saturday, was sitting on Bournemouth beach and had barely got the radio tuned before we were 2-0 down.  Looks like, laudably enough, he tried to be more progressive than the Arsenal and City games and press Liverpool in the same way as United did so successfully last week.  Problem with that is, if your press isn’t spot on and your defence is questionable you’re going to get torn apart and this is exactly what happened.

The sparring with the board has been ongoing all summer.  They backed him to the hilt in January but you can argue that only really Moore and Phillips fully worked out, even then Phillips is gone, Senesi doesn’t yet look an upgrade and it is highly unlikely Moore scores 15 goals this year.  Two of the three players (Fredericks, Rothwell) brought in early in the window were underwhelming ‘depth’ but in positions where it wasn’t necessarily needed and some of the more exciting contributors from last year, Lowe and Siriki Dembele have been almost completely frozen out.

There was talk last year that Parker likes grafters, essentially limited players who can follow his very precise coaching but even in the Championship this got shown up on several occasions (Hello, Preston!)  In the PL the coaches will work this out very quickly and expose the fairly basic tactics.

Scott Parker’s cardigan cost him £4.58 for every minute he wore it on the touchline

Internally, there has been mild discontent amongst supporters that the last five years in the PL left nothing tangible.  The training ground is next to the stadium and doesn’t compare well with others.  The club still don’t own the stadium meaning increasing capacity is almost impossible without moving, as it is in a public park there are hefty covenants all around.

Fans felt that an upgrade of at least one of these would be a fair reflection of where the club has reached.  Money is now being sunk into the training facility, almost certainly this has been at the expense of transfers.  The hope is that a better training/academy centre will allow the club to lock up more of the talent in the area (Dorset is a surprisingly big county) and stop the drain of it to places like Southampton which have much more state-of-the-art setups.

That isn’t a short-term plan and is probably in the best interests of the club moving forward, but obviously doesn’t fit with the short-termism of a manager who thinks he needs players now.

Ultimately this might be what has caused the breakdown, but I do think that rather than changing formation then grumbling about the lack of players, Parker might have sent what he considered to be his best team last year out at least once in pre-season or since the league started.  We haven’t yet played in a way suited to get the best out of key players (Cook, Lerma, Billing) meaning we still don’t know what the real Bournemouth is this season!

The next two games are Wolves home and Forest away, four points isn’t completely beyond the realms of possibility so we might have a better idea of whether the squad is up to it after Saturday.

One final thing – are we now Man U in miniature?  Forever looking for the man to follow the man.
Andy J, BH7

I don’t think Scott Parker is cut out to be a Premier League manager. Just like Lampard but that’s a story for another day. Parker can do wonders in the Championship and that’s his level I think. When he levels up into the PL, his shortcomings are laid bare. I think it would be wise for him to stay in his lane and not have ambitions of being a Premier League gaffer.

He’s just too beige. After we thumped Liverpool 9-0…I mean, 2-1, ETH was very animated on the Sky Sports interview, even swearing in front of the kids. That’s what a club needs, a manager with pashun! But what is Parker? He offers nothing. He just wears grandma’s sweaters and walks around the touchline with a blank expression on his face. I’m glad to see the back of that boring man…
Melveaux

How deep is your squad?
After the feint hope brought by the summer being vapourised after just 2 games, 2 wins and a couple more signings later and the hope is back again. It is starting to look to me like Utd might actually have some competition for places this season.

If I were to assume ETHs preferred starting XI once the new additions have settled in would be DDG in sticks, defence of Dalot, Varane, Martinez and Malacia, Casemiro, Eriksen and Bruno in midfield and Sancho, Martial & Anthony upfront. That leaves 2 starting England defenders in Shaw and Maguire needing to up their game plus AWB who I sill rate higher than Dalot. Then in midfield we’ve  got Fred and McTominay as cover and upfront we have Rashford, Elanga and that Ronaldo fella (possibly).

Lindelof and Donny may be a bit too far down the pecking order now to justify a mention other than cup appearances.

That for me looks like a significantly better squad with way more competition and better balance than any of the past few seasons. I’m very happy in defence and midfield and only a little concerned that our attack is a bit one dimensional with pace the major threat. That threat is multiplied exponentially however if they can exchange quick passes like for the Bruno goal.

I think it will be interesting to see how utd are playing 10 games into the season and I’d also be really keen to see some of the youngsters not mentioned above stake a claim for a place. We seem to have quite a few talented players tipped to make it that I’d like to see get some exposure in the cups.

And yes, Levenshulme Blue, I’d agree Haaland is a better signing than Martinez based on transfer fee. Good one! In fact, he could well be one of the best signings of all time based on transfer fee which just goes to show how non comparable fees are these days as they are more to do with the sellings clubs need to actually sell and how many years the footballer has on their contract – also the Haaland purchase did include several billion in wages and agent fees which he may well also justify.

A better comparison of a footballers value should possibly be their salary which no-one will be surprised to know Utd have 5 of the top 10 most highly paid footballers in the premiership. The other 5 actually are some of the best players in the league (KDB, Haaland, Salah, Grealish & Sterling).
Jon, Cape Town

The Golden Generation of management
Wayne Rooney made his England debut in 2003. He is now the manager at DC United. DC United are bottom of their league.

Frank Lampard and Steven Gerrard are both managing in the EPL. They are not doing well. We will all be surprised if they keep their jobs beyond Christmas. Although Gerrard will dine out on that Rangers season for a few years yet. And Lampard has them GCE’s, so he’ll always land on his feet.

Scott/y Parker has just been sacked. Woodgate previously managed this team without success. Without success ever as a manager, really.

Phil Neville and Gary Neville are failures at their respective levels.

David Beckham is the money/image behind a team. No one would trust him to manage a team.

Any of Rooney’s remaining contemporaries are pundits.

Perhaps this has been covered before, but English international football is not breeding reliable managers. Perhaps this is a global problem at the highest levels for prominent nations. I don’t know. The best paid players will always be unlikely to need the pressure and abuse.

But Rooney debuted almost 20 years ago. Eddie Howe is the best English manager to come along in that period. Roberto Di Matteo and Roberto Martinez have won major trophies during that period. I’d say it is a concern.
Eddie

(MC – Does Graham Potter mean nothing to you?)

Utter garbage, of course it will if Villa can line up a coach who actually knows what he’s doing. On recent evidence they could replace Gerrard with a cone wearing a bib and it would improve the coaching and motivation of the team.   That squad is easily top 10 if organised and coached well, but Gerrard and his coaches just don’t have a clue how to make it work.

It’s not just the results, it’s the performances – they’ve been boring, ineffective, lacking in creativity or entertainment, and generally rotten.

And Villa fans have not turned on their team – they know who is to blame for the crap being served up, and the boos were aimed squarely at him, just like they were aimed at Bruce and McLeish when they were serving up some of the direst, most excruciatingly boring, spirit-crushing excuses for football in their times at Villa.  And even then it took a while for the fans to turn.

Gerrard’s had 30 odd games, and a full pre-season to imbue his ideas into the team, as well as two transfer windows to bring in his players. There is no discernible progress form the Dean Smith days, and I’d say some quite obvious regression.    He’s failed, pure and simple and needs to go before it’s too late.
Kevin (cabbage at the ready)