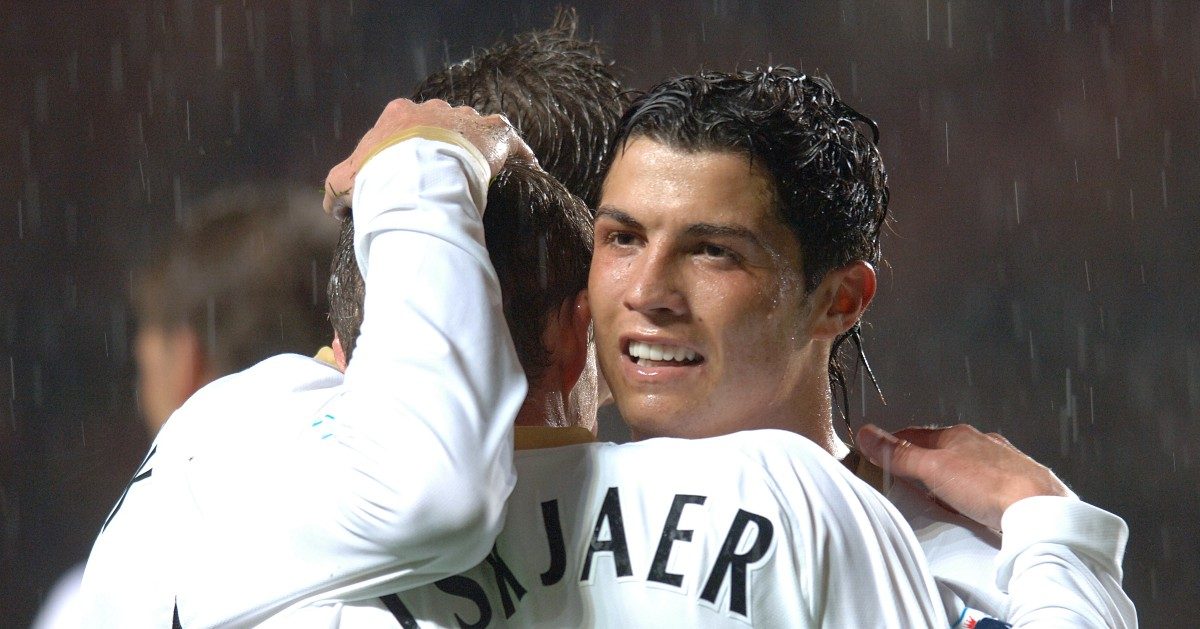 Some Manchester United supporters would rather Cristiano Ronaldo joined Manchester City. That money could have been spent on a midfielder.

The romance isn’t dead
It probably isn’t going to work out. It’s a huge amount of wages on a player we don’t need in an area of the pitch that isn’t in dire need of fixing. Signing Ronaldo could also be a stumbling block United have placed in their own way when it comes to financing a move for an actual midfielder.

But I don’t care. This is better. Football is about romance, blind denial and not listening to logic and reasonable arguments. If you’re a United fan and aren’t excited or an opposition fan who doesn’t “get it” you’re doing football wrong.

I’m going to live in the pure bliss of the next couple of days and use that as a comfort blanket when it all comes crashing down by mid February.
Wayne, Manchester

Yes, he’s 36. Yes, the wages are probably ridiculous. Yes, these sort of returns rarely work out like you think. Yes, there are other positions where we need new players more urgently.

But if you’re a Man Utd fan and not a little bit wet between the legs tonight I don’t know what to say to you…
Bill Handley, Distinctly moist, Gloucester

United are pretty well stocked with quality up front, do they really need him, does this divert funds that could’ve been invested in a quality midfielder, etc.

On the other hand, I’ve got a bloody big grin on my face because it’s Cristiano Ronaldo! I knew there was truth to those 12 years of rumours he was coming back…
Andy (MUFC)

So it’s finally happening. The boy from Madeira is coming home. Well not home exactly but home in our heads. Forget all the negativity being peddled by some. Yes, he’s not at his peak. Yes, he can’t fly down the wing anymore and won’t track back. And yes he’s a preening beast of a man who loves himself and craves adoration. Who cares? This is one of the best, arguably the best, footballer of all time coming back to where his star began to shine.

When I think of Ronaldo I think of one thing. It’s not the freekick against Portsmouth. Or the headers vs Roma and vs Chelsea in Moscow. Or the counter attack vs Arsenal. Or the Giggs-esque goal against Fulham. No, when I think about Ronaldo I think of the sound of the clatter of seats as we all stood up in anticipation when he got the ball and started gliding forward, that wave of excitement when you just feel the energy around you lift as everyone believes they’re about to witness something special.

Of course it might all go tits up and things might not work out. After all we still need a DM to plug gaps and let our forwards go play. But I think I speak for every single United supporter when I say I cannot wait to watch that boy Ronaldo light up Old Trafford once again.

A good move
After reading the mail box I planned to write this when I got home from the now, pubs open again China, though maybe it is a bit less relevant if Ronaldo has joined Man United. But for once I think Andy(MUFC) has it wrong.

He will not be Sanchez or Fred, who bizarrely, is still as good an option as we have.

Ronaldo is a goal scoring machine, fit as any player you can name,and will bring a work ethic to the dressing room that will embarrass the last vestiges of any hangers on given huge lengthy contracts by Mr Ed.

At 36 he is four years younger than when Ryan Giggs retired.

And why, Andy, are you worrying about the money? The owners take 20m+ out of the club every year in management fees, coupled with debt repayments of around  2bn since they bought United .Money is not a problem to sign Haaland next summer, though he may want go elsewhere..

I hope I wake up and read Cristiano is back at the club. If I am wrong about it being a good signing, I will write in to say so, but feeling pretty chuffed as I go to bed.

Sancho should benefit
I’m going to ignore all the emotion of the Cronaldo to City then to United rollercoaster and talk about one thing, how exciting it will be to see Ronny link up with a younger version of himself in Jadon Sancho.

Sancho came on for about 15 minutes in his first united match, and there wasn’t much to talk about. But I saw ONE moment, just one small second where Sancho did something my brain couldn’t comprehend with his feet and the ball and left a defender in the dust somewhere in midfield. I don’t think Sancho will become another Cronaldo, nor do I think it will be a failure when he doesn’t. But this is the first time in over a decade United have had a proper winger that makes defenders look proper confused. I hope the senior can rub off on the younger cause Sancho is already so good, and he could become even better lining up and learning next to a legend.

Forget about who wins and loses, this has been a tough year and I’m so glad to have entertaining football back.
Jamin, Montreal, Canada (MU f’n FC)

Would rather he went to Manchester City
I read the afternoon mailbox after news of Ronaldo’s move to United broke. I can imagine the speed with which United’s haters in that mailbox ate up their words. Rich Malb@lls’s diatribe in particular. I just had to laugh.

That said, the move would have quite a lot of repercussions (more negative than positive) for the club and the team. Here’s a few.

1. His wages. Having worked hard to get rid of the Sanchez conundrum which had a lot of influence on players negotiating new contracts with United, we are doing the exact same thing again. His contract hasn’t been agreed, yes, but he surely wouldn’t be taking that much of a wage cut.

2. The duration of his contact. I wished hard that City signed kane, cos it would mean United would have only bayern munich as competition for Haaland’s signature next summer, with mbappe moving to Madrid. Now, if ronaldo signs a 2 year contract, bayern and city would have a free run at him. I know who I’d choose.

3. Team spirit/morale. Cavani has the number 7 shirt. Do you take it off him and give to ronaldo? You still have all these brilliant young forwards in the team. What happens to them? Ronaldo will hog all of the limelight. At 36. Just not really worth it for me.

4. This transfer highlights a real lack of planning by the club’s board and the haphazard transfer philosophy over the years. Cavani and Mata signed new contracts this year on massive wages. We have not made a single cent in outgoing transfers this summer. Chelsea sold an academy player useless to them for 34 million pounds. We have only succeeded in loaning out 4 first team academy players. The team is bloated out of its tits. Yet, there’s money available for a vanity signing like ronaldo. WE DO NOT NEED HIM! Mr. Solskjaer keeps on about how there are roles for players like lingard, mata and jones when in reality, they will not get a game. How does a supposedly big club plan like this?

5. The single most important signing we needed to make this summer would probably remain a pipe dream now. Without that defensive midfielder to make room for a proper playmaker (stick Donny in this team ffs!) we will have more of the same of last season’s fare, Ronaldo or no ronaldo. Evidence? The last game.

I really wish he went to City.
Olu Omoloso, Lagos.

Not what we need
Ronaldo to United, where do I start?

As a United fan I’d give him the grace to go to City, the bloke’s a serial winner, so wants to win would go with my blessing. Good for us, had 3 exceptional seasons but he’s not a legend, same as a Beckham: went and had a career, will always be loved. Not a Scholes or Giggs who was one-club man (Schmeichel I still detest as he was “retiring” when he left and was supposed to be down timing his career).

But back to United? Not for me, he’s not what we need, will damage himself as won’t win a raffle under Ole, see Sunday when we need a goal so swaps one atrocious CDM (Matic) for another (McTominay).

United’s problem isn’t in attack, it’s in midfield and leadership. Granted Ronaldo will galvanise players but he can’t drag this side to a meaningful title. Lukaku has improved Chelsea, will Ronaldo improve United? No. Will he do that much better than Cavani?

Either way he’ll be given a truck load of money and we’ll never recoup anything, much like every other player we give a contract too. Matic, Mata, Jones, Andreas, Lingard, Jones, Fred, Bailly. No one will ever buy any of them, 1 because they are all rubbish and 2 because they are on a ridiculous salary. Until United get into the mindset of performance based contracts and actually getting players who want to play for United they won’t win a thing…not even the charity shield (which we can just about qualify for if Chelsea or City do the double and we scrape second).
Dean

Probably still needed a midfielder
Now that we know the funds are there, for what can only be assumed are astronomical wages for Ronaldo, is it unreasonable to ask that the powers that be at United actually spend on what they need the most?

The brain trust at United have to be given credit for signing Varane and Sancho, both seemingly excellent signings. But as Will Ford points out, they have left the job half done.

My question to United fans is, in pure footballing terms, would you rather sign two midfield upgrades over an aging, albeit still incredibly fit and effective, Ronaldo who won’t press from the front?

I say two because I don’t subscribe to the notion that simply signing a defensive midfielder would catapult United to the title or a title challenge. It was evident at Southampton that they had both a ‘destroyer’ (Ndidi, Bissouma) and a technical midfielder with good passing range and tactical/defensive discipline (Saul, Neves).

The romantic in me says take Ronaldo. The sentimental and emotional value is HUGE! And that is such a huge part of why we love football. But I’m torn, I’d also rather take two of the above and hopefully launch a sustained title challenge.
Matthew (Lisbon)

p.s Man United are the Death Star of the Premier League.

A fearsome attack. On the exterior a fantastic defence…..

Yet deep in the core, right in the middle, a fatal flaw leaving them open to destruction.
Matthew (Lisbon)

If your reaction to this is “what about a midfielder”, then football is wasted on you.
Alex