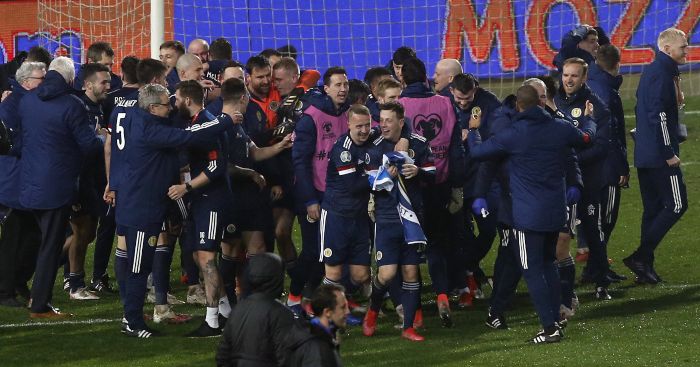 Send your potentially tipsy thoughts on Scotland and more to theeditor@football365.com.

Jocks out for Scotland

When Scotland get knocked out next summer, just how “brave” on the Celtic-team-goes-out-of-knock-out-tournament braveness scale will they be? I reckon…11.
Stu, Twickenham

If you want to understand what it’s like to be a Scotland fan, last night summed it up. Almost. Year after year, we’ve come so close and had so many nearly results and it looked like last night was to be the same. We were fantastic last night, completely dominating the game away from home against a good Serbia team containing players from Inter, Fiorentina, Real Madrid, Ajax, Sevilla and other top European clubs. Then it seemed like the classic Scottish trope of glorious failure was to come to pass again. A 90th minute, heart breaking equaliser that felt so familiar to the millions of Scots watching the game.

But not this time. Somehow we hung on through extra time, despite having subbed off our best players and we made it to penalties. And penalties? Honestly, I don’t know why England find them so difficult. Our current record is taken 10, scored 10. Easy!!

I haven’t been as nervous or as elated from a football match in many, many years. It gave me more joy than Liverpool winning the Champions League and more joy than winning the League. It’s just different with Scotland and its very hard to put into words.

The last 22 years have been long. I was 14 when we last played in a major tournament and it would have seemed ludicrous to my 14-year-old self that I’d be a grown up with mortgage, wife and child by the time the next chance came. During that time, we’ve had to sit and watch every second summer go by and merely observe. Euro 2016 was particularly tough, watching every other home nation not only qualify but make it through to the knockout stage.

But now its our turn and I cannot wait. The buzz before the games, the build up, the flags, plotting a possible opponent in the next round, buying a kit, indoctrinating my newborn son to support Scotland and not England, Scottish children seeing Scottish players in their Panini sticker album. All of it. And did i mention SCOTLAND v ENGLAND IN A MAJOUR TOURNAMENT.

Its been a long 22 years, but now its finally here. Bring. It. On.
Mike, LFC, London

Dave Tickner definitely had his heart broken by a bonnie Irish lassie on the halpenny bridge in Dublin some years ago. He really doesn’t like us. We’re a small country and have a few injuries at the moment but my god he really didn’t rate us last night. Take it handy Dave, have a guinness and maybe stay away from red headed people mate..
Robbie DFC Éire (When I hear Dave, I see Rodders from Only Fools.)

A huge congratulations to Scotland for reaching Euro 2020 after beating Serbia on penalties, commiserations to Northern Ireland for sadly not being able to beat Slovakia, I certainly expected N.Ireland to get the job done and Scotland more likely to not beat Serbia, but football isn’t played on paper as we all know by now, fantastic to see three of the home nations at next summers tournament, maybe Chelsea’s Billy Gilmour will be in the squad, who knows.

I’m sure I’m not the only one who also saw Hungary beat Iceland and imagined what headline puns could be potentially made right there.
Mikey, CFC

In a fairytale story that might fly under the radar, 37 year old Goran Pandev secured North Macedonias first EURO appearance in 2021.He made his debut 19 years ago for the national team, retired and has returned to clinch the euro qualification.

The Champions League winner is going to be the key player for his nation at 38, debuting at a big competition.
FilipM

Of all the things that confuse me about football, the one I really don’t get is the narrative around Man United and Sancho.

Let’s assume you have children growing up and you decide you need a larger home. Down the road is a very nice property that would work well for you. You have a budget that you have stretched especially in these troubled times, but the price they want is 25% higher than the furthest you can go. So you make an offer, and hope they come down on the price. But they don’t. Next thing you know you’re being pilloried for being a numpty who didn’t pay the astronomical price for the home you needed.

Sancho may be good, and he may be a great fit, but since when has £100m been acceptable for a 20 year old player unless they’ve scored winning goals in World Cup finals, or dominated champions league games? And even if he was why is it wrong to work with a budget? And with all the indiscretions around money in football, shouldn’t we be lauding any level of fiscal prudence? It’s not like we bought expensive players and fired our mascot for cost cutting reasons. And it’s not like United agreed a price and then backed off from the deal.

So I’m perplexed to see Jadon Sancho being called United’s worst transfer business. Just stop for a moment and think about what a hundred million pounds means. These numbers roll off very easily in football conversations, but would that even be conscionable in these times, when the sum total of money being offered to save entire lower league teams is 50m?

I submit to you that United’s worst transfer business is actually just not letting poor Romero leave on a free transfer to wherever he wants. The guy has been nothing but professional despite being a constant under-study, even when De Gea was floundering. And his performances have always been at the very top level. He deserves better than to be a negotiating pawn or a 3rd choice keeper in the final days of his career.

And while we’re about it, was that smart business from Dortmund? To say no to more than 80m for a player they signed 3 years ago for under 10m and end up with an under-motivated player who hasn’t really got going this season?
Ved Sen (What do Dortmund do with all the money they get??)

The thing I was most impressed by in the England – Ireland game was the kit numbers England wore. Best decision Southgate has done yet! Ireland on the other hand with Hourihane wearing no. 6?! Have a word!
Mark, SW London

England at home to Ireland.  And we’re playing in BLUE.

But of course we are.  That colour being one of the most important parts of the English flag, obvs.

Seriously?  How much have the FA (the F**kwit Association) shelled out to commission, design, approve and make a BLUE England kit?

Now, call me a bluff old heterosexual but why on earth is it, apparently, not acceptable, at home, to play in red with a bit of white, or white, with a bit of red?

Does anybody in the FA (see brackets above) really believe adults and kids in their droves will be demanding replica versions of this strip for Christmas?
Mark (Or is it that the senior members of the FA have extreme and outdated views on ‘colour’ in general?).  MCFC