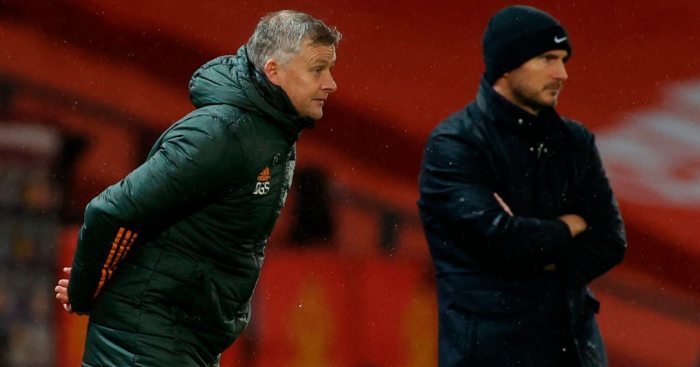 Ole’s criticism is not Brexitism

I have to take issue with Dave’s assertion that Frank’s supposed free pass, in contrast to the criticism of OGS is due to a pro-English Brexit mentality. Firstly, I’m not even sure it’s true. I’ve heard a good deal of criticism of Lampard’s Chelsea as well as several pundits defending Ole.

However, if you do want to compare, let’s at least be honest. Dave claims that poor Ole is feeding off transfer scraps, raking around the bins just to see if he can find a defender to weave into his patchwork team. What a load of absolute nonsense. Yes, the most recent window was positive for Chelsea and poor for United, but you have to look at the big picture. Since Ole and Frank took over, United have spent £268m. Chelsea have spent £262. In that time, Chelsea have had to sell their best player. United had to sell no one.

To say that Ole hasn’t been backed is fiction. Only five clubs in the world have spent more than United since Ole took over. Of those five, three have raised more than £200m in sales, and one has raised more than £300m. United have raised £85m. Now I’m not saying net spend is hugely important, but it illustrates the fact that OGS has been given wads of cash to spend, without needing to sell any of his squad.

If you want to know why Ole is criticised so much, it’s because he’s not doing a very good job. He has his moments, such as PSG, but on the whole he is doing poorly. Dave himself says that Chelsea should be walking away with the title, yet for United, who have spent more, there is no such expectation.

This season. United have been outplayed by Brighton and Palace. They have been thrashed by Tottenham. They have failed to win any of their first 3 games at home, the worst run since the invention of the mobile phone. Last season, they won fewer than half their games and only made the top 4 because of the sorry state of affairs of the other challengers. And all this after outspending almost every other team in the league.

So no, the criticism of Ole is not because he’s Norweigan. It’s because he’s a very average manager who is completely out of his depth.
Mike, LFC, London

I of course am not sure but could it be possible that maybe the reports Ole want VDB to bulk up are true? or that maybe he is just blooding him in? Or maybe VDB told his agent to speak out and Ole is responding?

Either way something is up but the size of the deal being made out of it is a bit worrying. Klopp did the same with Fabinho, turned out alright and there wasn’t too much fuss about it.

Adding to the fact he is a man competing against 5 other men for 3 spots. Fernandes nobody would argue with replacing him. The Fred- McTominay double pivot seems to deliver us our most balanced midfield and when it comes to using a sub, Pogba for all his troubles is still a magnificent footballer whilst Matic is very experienced and is a better shield.

That seems to make me seem like the signing was a mistake. Perhaps so, but also perhaps not. The PSG 3-4-1-2 with him Box-to-box sounds tasty. or in a similar roll in a 4 3 3 with Pogba and Matic.

Either way he is clearly a very good footballer and one we should be happy to have the option of. It is early season and clearly Ole is working out his best midfield. (Which was obvious back in January that is was Fred-McTomz-Fernandes).

It may also be genius, What if DVB is the Pogba replacement brought in early to learn what Paul does(and should do). Sell Pogba in Jan or the summer and replace him with a solid Ball winner/Destroyer and that midfield looks a whole lot more solid.

Interesting to read Alex (The bundesliga seems to be at the forefront of tactical innovation), saying that Man Utd could do with utilsiing the ‘3-3-2-2’ formation Schalke used this weekend. What Alex neglects to mention is how the formation helped them to a dominant victory over a strong Dortmund team. Oh, wait, they lost 3-0, had 25% possession, only 3 shots, and were terrible throughout. Actually, thinking about it, maybe it’s not such a bad idea for United to give it a go, if only for the entertainment of the rest of the Prem.
JL, Deutschland

Schalke got battered 3-0 in a game where Dortmund managed 75% (Seventy Five Percent!) of possession and mustered 18 shots. Schalke managed 3 shots, non on target.
Not sure that formation should really be seeing the light of day again.
Mat, Liverpool

Five things I have noticed this weekend…

Do newspapers still notice 5 things these days, I think they do so I will have a go at 5 things I have noticed this weekend;

1. When players take a corner they like to place the ball outside the corner arc. As we know, this is fine as long as the ball overhangs the line. I have noticed this weekend that when the corner is on the Assistant Referee’s side of the pitch he has a little look to see it overhangs. When it is on the other side of the pitch, no such check. Opposition fans used to go nuts for this for some reason but no fans means the ref never comes over to check.

2. Is there a less imposed rule in football than the 6-second rule? Goalkeepers can hold the ball for 6 seconds and then have to release. We are in a place where and armpit or the edge of a sleeve can play you on or offside and if a keeper comes an inch off his line a penalty is retaken. However, Alisson picked the ball up dead on 90 minutes on the weekend and kicked it out on 90.15 with no issue whatsoever. Again, no fans means no noise and keepers getting up to 15 or 20 seconds pretty regularly.

3. Carlo Ancelotti should take a video of himself saying ‘he is a good lad and he never meant to injury him’ and send it to Sky Sports and MOTD and he would never have to do another post match interview again.

4. Leicester are awful without Vardy.

5. The league table makes stunning reading, especially for those bemoaning the big six and their domination of the game. There is one ‘big six’ club in the top eight currently. In fact, there are more ‘big six’ clubs in the bottom eight than the top eight. How’s that for your domination?
Micki (noticing things since 1982) Attridge

Has pep got compromising pictures of all the F365 writers stashed away somewhere?

It seems he is the only manager in the premier league immune to criticism, and whatever stumble City have he never gets called out in the ‘Losers’ section. His management of the City team has been shambolic since the start of last season to be frank.

Todays winners and losers states ‘Guardiola has had rotten luck with injuries’. Absolute nonsense, Guardiola has now been at City 4 years and failed to improve expensive defenders to the point that when even more expensive defenders are injured the team collapse. At somepoint he has to take the blame for what can only be classed as embarrassing for a team that has backed him so heavily in the transfer market. His constant team rotation doesn’t breed any familiarity in style, he tries to overthink tactics whilst frequently getting it wrong (Lyon in the Champions League anyone – in fact, almost all his Champions League knockout games since he left Barca). I’m starting to get to the conclusion that he is the definition of a chequebook manager disguised by some fancy hand gestures designed to make him look like a tactician.
Thomas Parker

Ross from Essex.  It’s just you.

As for the match, we deserved that trouncing.  Southampton were full value for the money and never allowed us a foothold in the match.  According to the announcers, DCL touched the ball a grand total of 17 times.  Ings?  51 times.  You’re not going to win a match with those sorts of statistics.  Digne’s red card never a red as purely accidental.  I expect us to appeal, and in Everton fashion, I expect us to lose that appeal because, well because we’re not a “big six” club.

But again, I can’t say enough about how good Southampton looked.  If they continue to play like that, top half is a cinch for them.
TX Bill (we were so poor, not one player could have been MotM) EFC

Football fans disliking the media’s Leeds love-in should start to ask why. The Premier League is littered with expensively assembled teams whose only purpose is to finish above the relegation places. Tactics can vary wildly from game to game and results are usually decided by mistakes or individual skill. Few teams approach games like Leeds. It seems nothing more than a minor inconvenience that a centre back is forced to switch to midfield, a right back to centre back or a right midfielder to left back. The system is constant and players are variables. Defending and attacking is performed as a unit, players know their roles inside out, and little is left to chance. The standard of coaching in the Premier League is poor and leadership is short-sighted. Fans should direct their annoyance towards their own club and ask why Leeds are able to punch well above their weight.

Before VAR we had referees and linesmen and, week after week, players and managers would come out to say that the refereeing was bad, that they didn’t read the game and, for all the money spent in football, there had to be some accountability.  VAR came along and we still have the same issues, with ex-pros putting in their opinion about poor refereeing, bad use of VAR and inconsistent application.  How many pro’s ever thought, “you know what? I am going to train to be a referee when I retire and maybe even work to make this game better!”  None.  Take the money, pay a lot of money for skinny shirts that they are struggling to stay within and spend the days golfing or holidaying in Dubai.  It seems that pro’s would entertain management, but none actually think that, with maybe 15 years available to them to be a referee (maybe more) that they could actually make a difference.  Put up or shut up, and buy bigger shirts.
Nick in Woking

I thought I’d break with tradition and comment on VAR, just to keep it fresh.

The offside rule was conceived in the 19th Century, so I think it’s pretty safe to assume that the wise elders of association football didn’t foresee a situation where a self-important pedant, squirreled away from the general public could spend literally as long as he wants trying to use his digital slide rule to suck any kind of joy and spontaneity out of football.

There is a spirit to offside. It was never supposed to come down to split second decisions and millimetres. If whatever clown they have at Stockley Park can’t establish, with no doubt, that a goal is offside within ten seconds, then it’s onside.

See Salah “goal” from Saturday. As much as it is a shame to rule out a thing of such beauty, it was obvious immediately that he had strayed offside. All sorted in ten seconds. No-one can complain. Had he been a foot in the other direction, then it would have taken longer than ten seconds to establish his actual position, and therefore, goal.

What’s complicated about that?
Mat (last time I expressed my optimism about what Klopp is building, we got tonked by Villa, so I’m saying nothing)

Its funny watching Arsenal fans complaining about VAR while not mentioning the obvious second yellow that Bellerin should have received.
MM, Man Utd, India