Home Mailbox Solskjaer either made one mistake or was ’embarrassing’ 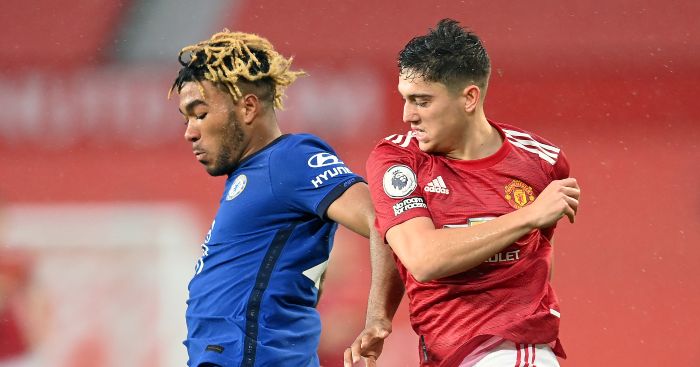 Send your thoughts on Man Utd and more to theeditor@football365.com

16 Conclusions (ours are great but these aren’t bad either)

4) The Chelsea goalie nearly kicked it in his goal. That would’ve been embarrassing.

6) There was another kick off.

7) Have I mentioned it was raining?!

8) Oh I shit, I didn’t realise Daniel James was still out there.

9) Lampard looks silly in a hat.

10) It must be raining a lot, Lampard’s hat looks pretty wet.

11) Nobody wants to see The Lovely Juan Mata™️ mutter under his breath as he trots off. I hope someone gave him a cuddle.

12) Substitutes are supposed to change the game, Man Utd had a better bench than their starting line up, and somehow managed to get worse when they made their subs, which leads me nicely onto…

15) I must have imagined Man Utd signing a midfielder wanted by Real Madrid, and a left back who scored 11 goals last season.

16) There were a lot of puddles forming around the pitch as the players trudged off. Must have been from all the fans, who were BORED TO TEARS. Buh dum tshhhhh, heres hoping you stuck around for that zinger.
Mark Endicott, MUFC

The only reason that match ended 0-0 is because Lampard played basically not to lose the game (finally resurrected the Jose in him). I cant remember Degea being really troubled at any point in the game while Mendy was arguably the MOM.

Ole could have played with a back three and be more solid while playing on the break, but instead he played with a formation that shows he was expecting Chelsea to be defensive alas! he was expecting Chelsea to be Newcastle and boy oh boy they didn’t disappoint. The only mistake Ole made in my opinion was to start Dan James. What is actually the point of him? For Ole to be more open than that would have been suicidal, while Chelsea really should not need five defenders and two holding players to get a draw against the almighty MAn Utd.
Teejay, Lagos (Man Utd would have won that game if Kepa was in goal)

Tonight was utterly embarrassing and finishing the night in 15th is proof of the turgid manager we have.

Quick one on Liverpool’s defence – specifically Gomez. Thought he was excellent against Sheffield today. Plenty of recovery runs, decent in the air vs McBurnie (a proper handful!) and made a fair number of handy blocks.

Maybe losing VVD has woken him up a bit? Wouldn’t want to speculate on laziness or lack of focus, but wonder if knowing that VVD isn’t there to sweep up any errors will force Gomez to focus more? Just a thought.

All the best to the mailboxers,
Sam

I’m so sick of reading about VAR and hearing people moan about it on all media channels. ” Its ruining the game!”, “It’s killing the joy of celebrating a goal!”. Just stop it. This very website is full of opinion pieces moaning about it.

It’s just embarrassing. Instead of having a moan about the level of atrocious officiating on the pitch and in the booth, we are having debates about VAR killing the joy of the game. Guess what, the second you remove VAR, we will have the exact same moan about how the game is ruined by XYZ poor decision.

The technology is fine. It literally works in almost every other sport it is used, because the refs are competent, the rules are clearly defined where possible and where there is murkiness, the call goes with either the attacker or the on field initial call.  I’m not being paid to sort this shit out, but here is a VERY basic view on things for Football:

Offsides: The point should be to encourage goals. You can write off a goal after the fact, you can’t magic a goal after it’s been halted prematurely.

The ref/linesman allows play to continue. The TV review looks to see if there is a blatant off sides ( i.e. there is clear daylight between the last foot/torso of the defender and the attacker) you remove the howlers immediately. A line that is of a standard width ( let’s pretend 2 pixels) is drawn from the defenders last foot, or torso point if applicable. If the foot/torso of the attacker is over this, no goal. If within, he’s in line and its to the attackers advantage.

Handball: The point should be to avoid howlers.  I have no idea why there has to be a CSI level of examination of every play.  Things revert back to pre VAR rulings. The TV ref should be able to intercede if they see something obvious, a player reaches out.

This leads nicely to the TV ref. They should operate like in rugby. If they see something blatantly wrong, they have to bring it up with the ref. Case in point the VVD situation. Again, if the competence of the TV ref is poor, this is a moot point. But they should be able to go, that’s a dangerous tackle and a red.

This really all depends on how good the users are. We can make modifications to make it a better system after this is sorted out.
Joe Soap (The universe)

Thoughts are with Andre Marriner at this difficult time. For what it’s worth nobody did more than him to try and influence the outcome tonight. Somehow he just couldn’t quite fail to spot or overlook enough to help his team over the line.

If var is going to be this shit can we please have decisions made by the roll of a dice instead? It’s faster, genuinely based on chance and exciting. Surely TV would get behind it because they already love all that sweet juicy gambling money. If this sounds tongue in cheek it’s not; i’d genuinely prefer it to the current system of increasingly incomprehensible decisions made by idiots. Martial red card, Pickford non red, Maguire non-penalty, Fabinho penalty. Every decision probably wrong and each one had massive influence on the games. The system is a disgrace because the refs who administer it are not up to standard.
Minty, LFC

Pickford and a preview

Everton v Southampton: I imagine Ancelotti to be a fairly straightforward manager, so the first name on his team sheet will be the keeper, and it will be Jordan Pickford. It almost certainly shouldn’t be. He should either be suspended or dropped. As an Evertonian, I  lean towards the latter, he has not been playing well and I think it’s incredibly tough mentally for a keeper in that situation (look at Kepa) and the focus that comes with position.

The van Dijk incident has run and run, covered at length in the mailbox, in the David Squires cartoon, by Piers Morgan and in multiple press conferences. I do think Pickford’s foul on van Dijk has been victim of ‘outcome bias’. The fact that van Dijk, arguably Liverpools best player, misses the season makes it worse. Jon Nicholson actually said Richarlisons was better?! I imagine Jon didn’t watch it live because it’s a Premiership game, which he hates, and it clashed with the Old Firm derby – so he’s making his comments after all hot takes have been made.

It’s a perfect storm of biggest game of the weekend, under pressure England player, Big 6 captain, VAR… If you look at the takes from the goalkeepers union (David Preece, Rob Green, Tom Heaton) they say Pickford is doing what keepers are supposed to do, jump out and make themselves look big, except that Pickford is in such bad form he completely looses flight of the ball, and has no awareness of where other players are, and collides.

He definitely should have been carded regardless of it being offside or not – which was debatable. That’s it. Out of form goalkeeper makes mistake, important player for opposition is devastatingly injured from it, it’s coupled with a really dodgy offisde from VAR, in a derby.

So yes, there will be venting, but accusations of “assault” and team wide premeditated tactics are absurd (as is trolling with photos of Liverpool players making bad tackles from nearly 20 years ago).

That took longer than I thought. Anyway back to the preview…

The other reason Pickford won’t be dropped is there’s likely to be other changes higher up the pitch. Richarlison is suspended and there are doubts over Coleman (who came off in the derby) and Rodríguez (who was [redacted]…). So the poor performers from last Saturday, like Gomes, will probably be given a stay of execution.

I think Carlo is ideally hoping he has to swap Iwobi for Richarlison but we could see Sigurdsson, Davies, Bernard, Gordon, Kenny and Godfrey close to the starting XI (how many of our players have old man names as surnames?!).

The player I’ll be most fascinated in is on the opposition, however: Theo Walcott. I feel for Theo, he’s had some absolute highs in his career (none really at Everton) but that hat trick in Croatia in 2008 was probably the zenith. He’s just such a median player; when the team are playing well he’s great, when they’re not he’s never going to change the game or grab it by the scruff of the neck and dictate terms.

So obviously, playing in some good Arsenal teams really helped him, but when they started to decline, so did he. At the beginning of the Silva reign I remember Football365 said, after we’d got a result at Bournemouth, the movement of Richarlison, Walcott and Tosun (ha!) was reason for optimism, but alas that went with Silva. The absolute nadir being in the derby in the cup last season when under Ancelotti we lost to Liverpool reserves and Walcott had a shocker.

Still, I don’t wish him any ill will, he always tried and seems like a decent bloke. Put a fiver on him to score the winner.

That’s because I really don’t know what to make of Southampton, they’ve had some weird results (5-2 at home to Spurs) but seem to have good players, and in Ings and Adams they’ll but our suspect defence under pressure. If we get 3 points, it will be a massive statement on our chances for breaking up the Top 6, and more of a barometer than a draw against Liverpool in a game that was too crazy to judge. Let’s see.