Home Mailbox Back to being bored of Mourinho, and other mails… 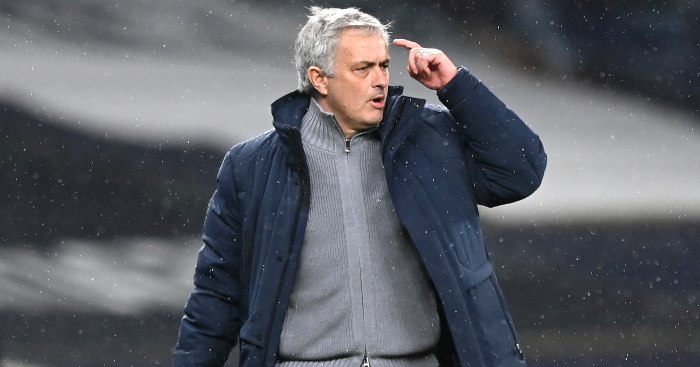 Bored of Jose again
At 81 minutes I made a gin and tonic, having moved on from beer as it seemed the game was beyond us and I got to thinking; having played eye bleeding football for his whole first year with no tangible result, there was then a brief period where being top of the table and some witty instagram banter made Jose almost likeable, now I’m back to being bored of him again; what has he actually done to the team? Focus was dreadful tonight (Bergwijn’s end product was again poor and BOTH right backs where dreadful in possession and in positioning, pretty sure the only reason the otherwise excellent Rodon dropped a bollock for the goal was a lack of a shout from Doherty) and the substitutions totally uninspired (I’ve always been a big fan of Lamela and Winks but both look like they’re living on borrowed time now, why did Ndombele go the distance, where was Vinicius when we needed a focal point?), he’d better hope we win a cup as I can see Levy’s Mourinho hard-on fading even more prematurely than most chairmen’s and him being gone this summer.
Jerome, THFC, Bristol

Mailbox conclusions
Because of work I saw this game from the 40th on and what I saw was a dominant performance from Liverpool. They attacked with intent and an almost visible hunger for goals. Firmino and TTA have come in for a lot of criticism so their goals (and TTA’s assist) must have been satisfying.

I was quite surprised by the amount of space Liverpool had down the right but I suppose it was to do with Spurs missing Davies and Reguilon. However it was interesting to note how conservative TTA was and Robertson even moreso.

Wijnaldum was immense in midfield, as was Thiago. Wijnaldum’s ability to hold onto the ball in tight spaces is an incredible asset and he only became more important after Thiago went off.

Speaking of which, with head injuries more in focus these days, if a guy had to get stitches in his head, should he have been back on the field?

Salah threatened throughout. I watch these games on DAZN and the commentators are constantly talking about his amazing close control, going so far as to call him a genius tonight. When he’s in the mood there are few more dangerous players in the world.

The Firmino handball is strange because if the goal is being chalked off for handball, surely it must be a Liverpool free? Dier was basically bear hugging Firmino before he “controlled” the ball.

Is Matip actually made of Lego and scotch tape?

What a strike from Holjberg. At first I thought he’d got lucky and sliced it but the replay seemed to show he meant to hit across the ball to create the spin to take it away from Alison. Or maybe he just gave a slippy ball an almighty slap.

All in all, exactly what Liverpool needed. Goals, victory and plenty of good performances.
Alan, Córdoba.

…Delighted with the result last night but it really never fails to amaze me when a ref goes to the screen and watches a defender totally man handling someone and calmly disallows a goal to give handball and a free kick the other way. That scenario was either a goal or a free kick to Liverpool. Atkinson is one of the better refs in the league but he’s so ordinary.

For the first forty minutes we looked set to dominate possession but seemed unlikely to score and it made me worry that we were going to get sucker punched and end up losing. The Son offside was very close and lucky for us but after that Spurs didn’t really cut us open again. In the end we started to look very potent. I think a combination of Firmino coming deep and then running forward really disrupted their deep back line plus Salah and Mané had a lot of lateral movement which meant that sometimes they were forcing Trent and Robertson to go through the middle which was not strictly what Spurs were expecting nor what we have done much in the past few weeks.

It’s such a shame that we have been so dreadful for so long because we should’ve been competing for the league still and days like today remind you just how good our lot is. It sounds like Matip will be missing a lot of football (again) and with Fabinho injured too it puts us in a strange position. I would love to see us sign a central defender before the deadline but think it’s very unlikely. Ultimately Klopp has proven himself to be ruthless in the past and I think he knows that he can’t rely on Matip or Gomez as centre backs for the long haul.

Also Hojberg scoring his first league goal with an absolute screamer from 25 yards. Very Liverpool thing of days past to happen. Surprised we didn’t collapse and concede 3 quickly after that.
Minty, LFC

Awaiting clarification
After the debacle of the Rodri/Mings incident the other week (PGMOL – we clarified our interpretation with IFAB and following that our interpretation of the rule has changed and if it happened again it would be disallowed but the original decision was correct as the rule hasn’t changed – eh what?) and the van Dijk/Pickford (We were so busy looking to see if it was offside we missed the flying assault that put van Dijk out for the season) and the Son/Andre Gomes (Gomes got a really nasty injury as a consequence of the nothing challenge from Son so he got a red card – look how nasty that injury was!) now we are back to the handball law after Salah’s disallowed goal last night.

It doesn’t need a lot of discussion – I’ll simply point to Tammy Abraham’s goal in the West Brom v Chelsea. Cross comes in, Havertz handles it, a defender clears it to Mount and from his shot the keeper parries it to Abraham. The incident was referred to VAR, which ruled the handball did not “directly lead to a goal”. Afterwards, the PGMOL announced that the IFAB had amended the law pre-season to say an accidental handball will now only be penalised if it occurs “immediately” before a goal is scored. The ball never left the penalty area and from handball to ball hitting the net took less than 5 seconds. Salah’s shot hit the net 10 seconds after Firmino handled the ball in his half.

I look forward to the next PGMOL arse covering statement.

Angry dad
My dad hates Erik Lamela. I’ve never been quite able to hate him, as he’s not done anything that particularly warrants it. That said, when he came on at half time last night, I knew we’d lost. He buzzes about like an annoying little wasp but honestly, he does nothing. He never beats a man, and never plays that killer pass either. Who are you Erik Lamela? What do you do?!
Jon (Bale just makes me sad now), Lincoln

Beaten at their own game
Losing to Sheffield United doesn’t hurt because they now have the unwanted record of “worst ever PL team after 19 games”, it used to be Derby’s if i recall correctly, well, after a full season.

Its that they beat us at our own game. They employed a game plan to effect, which we have used to effect ourselves in the past. So we cant complain about it really. Not in my opinion.

We are also going to use that game plan ourselves again in the future, solidifying the fact that we cant complain about it. We have been terrible at home for longer than both Ole and Covid too.

We are probably going to use that same game plan ourselves against Arsenal. And if we do use it against Arsenal, and it fails, it will hurt more. But if it works i will celebrate.

Lee Dixon’s biggest fan
I’m really exhausted by all the partisan bickering in all walks of life at the moment so can we all agree on one thing; Lee Dixon is one of the most boring people you could be forced to listen to the inane ramblings of for ninety minutes.

My favourite from last night’s game was his comment that, “if you gave a penalty for that there would be ten penalties a game” when discussing shirt pulling. Such an obvious fallacy of logic as though none of the players would adjust their behaviour and would just continue to be dumbfounded every time as penalty after penalty was conceded.

He reminds me of Mr. Brittas with his droning tone and he makes an exciting end to end game sound like checking a book on filling out tax forms out of a library.
David, LFC (corner to be unturned by in form West Ham at the weekend)