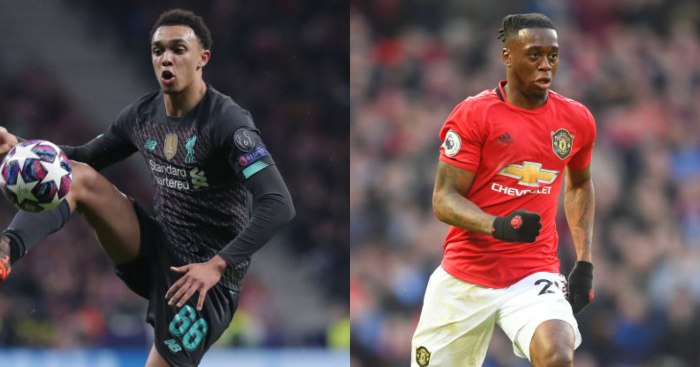 Send your thoughts on Steven Gerrard and whatever else to theeditor@football365.com…

AWB v TAA
I see Patrick Van Aanholt has followed GNev in coming out with the view that AWB is a better defender than TAA like this is a ground breaking declaration.

He’s a better all round player, the definition of the new breed of attacking full back and fits perfectly into Liverpool’s system but I haven’t seen one person say TAA a better pure defender than AWB, simply because he clearly isn’t.

Seems like a lot of straw men arguing going on to me
Ben, Chester

Gerrard played out of his skin in the 05 final
Dear Editor,

Just a quick one for Brian, Wexford.

Hahahahahahaha. What utter nonsense. Gerrard scored the first, would have scored the third but for being brought down, played three different positions. In the second half he bossed a midfield (alongside Hamann and Alonso) of Gattuso, Seedorf and Kaka.

As for wanting to be the hero – yeah sure, I believe it was Rafa that decided he should take the final penalty as he’s a top penalty taker and Alonso had missed one already. Alonso took the penalty for what would be the equaliser (not Gerrard). AND he played extra time at right back to fill the gap.

In response to Brian from Wexford, mostly because I can never resist a good Beckham love-in, I fully see where he is coming from on the comparison. Gerrard definitely had far more complete performances than in Istanbul, while Beckham almost single-handedly carved out all of United’s best chances vs. Bayern Munich. There is something intangible about emotional, driven central midfield players with an all-action style of play though, and it always lives longer in the memory. I remember Gennaro Gattuso virtually acting as a cheerleader at the San Siro in 2007 against United and being portrayed the next day as unstoppable, whereas his performance on the night was probably below that of Pirlo or Seedorf (as it usually was).

On the Beckham point – I feel like we often forget just how bloody good he was in 1999. It’s worth watching the highlights of the matches against Barcelona, Inter, Juventus and Bayern to see just how good his crossing was – he created 4-5 good goalscoring chances every single game, and (if I recall correctly) assisted at least twice against each. He actually perfected crossing for a few years.

Ironic that Brian’s mail is about misconceptions and then he litters it with them.

I don’t recognise the narrative about Gerrard dragging the side to victory with a Roy of the Rovers performance on the pitch, more an acknowledgement of the impact he had in the game by being responsible for the 1st and 3rd goals.  If anything, the narrative has been the huge impact Didi Hamman had when he came on for Finnan at the start of the second half, allowing Gerrard to move further forward.  That said, Gerrard was named Man of the Match so perhaps that’s informed your narrative.  There’s also been some interviews from players saying that he delivered an inspirational half time team talk which could have fed into that narrative.

Regarding Gerrard ‘wanting to be the hero by taking the 5th’…. Do you really think that notoriously cold blooded control freak Rafa Benitez would let Gerrard decide which penalty to take?  It’s an oft used tactic to have a strong penalty taker as the 5th because they could very well be in the highly pressurised situation of the game/competition being won or lost on their kick.

As to the criticism of Terry and Ronaldo, I have no recollection of it (not living in the UK at the time I was able to avoid the fallout from a CL final between two of our big rivals) but I can say with a great deal of certainty that, contrary to your assertion, if there was criticism of them it didn’t take place before Gerrard’s non-penaltykick.
James Outram, Wirral

Stating the obvious, but still…

Like Brian in Wexford, I too watched the rerun of the 2005 Champions League Final on Irish TV last night. Whether Gerrard was better than Beckham was in 1999 doesn’t matter to me, but what struck me was that, as well as bringing back memories of one of the most exciting times in my adult life, it enabled me to fully realise the absolutely momentous achievement it was for Liverpool to win that night against a far superior team.

In my 20s at the time, I was too excited and full of nerves back in 2005 to notice everything that went on, and though all the actual drama has been etched in my brain ever since, I had never really noticed some of the obvious details – the most striking being the imbalance in quality between the two sides.

I may be very slow on the uptake, but last night, when I saw Rui Costa come on for Gattuso in extra time, I started to laugh. That AC Milan side had such an embarrassment of riches.

Not a strong side, to say the least. Traore makes any side look weak. Riise in midfield? To add to that, we bring on ‘nice lad, tries hard’ Smicer for an injured Kewell after 20 minutes, and had a bench of Josemi, Hamann, Nunez, Biscan and Cisse.

I mean, that’s insane strength. How the hell did we win that match? I know I’m stating the obvious here, but that was some achievement.

Oh, and before anyone rushes back with their answers to ‘how the hell did we win that match’? – yes, I know, Gerrard probably dived for the penalty.
A, Dublin

I have to agree with Brian in Wexford’s mail about the 2005 CL final. I remember watching it and saw it again recently and Steven Gerrard was terrible.

Yes — so what he scored an amazing goal, gave a inspirational half time talk, gave an assist for a pen, ran until he got cramp playing at right back for the whole of extra time but he didn’t take a penalty in the shootout.

What a fraud, all these people who say he was the difference in that final and how he single handedly won that final for Liverpool are just silly.

Yes, Brian has got it spot on.

Oh and Beckham was incredible in 1999 final , definitely above Nicky butt and Giggs who literally everyone else cites as being major influences in that final.

Thank god for people like Brian. I need a good laugh these days
Ade ( Zidane was the worst player on the pitch on 1998 World Cup final ) Guildford

Maddison’s trophy cabinet…
In today’s Mediawatch, it was highlighted that James Maddison’s “biggest goal now is to win trophies”, and that “in [his] house [he has] a trophy cabinet and there are not many in there. There are individual awards but no trophies. [He] want trophies.”

Someone should probably give him a heads up that when clubs win trophies, the trophy goes to the club’s trophy cabinet. I’m not sure that winning trophies is going to help him with the lack of non-individual-awards in his trophy cabinet.
Oliver (unless he would get replicas made of the team trophies he won – in fairness, that is the kind of thing I would do…) Dziggel, Geneva Switzerland

There’s no money at the top, let alone the bottom…
A few counterpoints to Kevin, ITFC, Vancouver.

– Sharing some money with non promotion teams will likely not going to be enough because it is vastly lower than what the teams would have gotten if they were in the EPL. If the EPL could have finished the season but didnt, Leeds and WBA are going to sue them and the relegation teams for sure. That court battle will last years.

– I’m not sure what you mean by “remaining broadcasting money”. There won’t be enough to even give the EPL teams wont get the full amount they should get this year – let alone any leftover. Forget about the EFL Championship having any TV money leftover for League 1 and 2 either, they kinds need every penny for themselves and would likely sue the EFL if they did not try to give them as close go their due as possible.

– Same goes for Champions League TV money too. Billboard and shirt sponsors will also want clawbacks cos they’re not be in shown on TV as often.

– The “broadcasters” do not want to take the hit and a lot of subs have already been lost. They made that very much clear and has threatened clawback some money even if the closed doors game goes on, according to the BBC.

Of course I agree that there has to be a plan on what to do if the season isn’t finished just that I don’t think your suggestion is feasible based on money available. Not that any solution made (including any of mine) will be perfect though, someone is going to get the short straw on this.
Yaru, Malaysia