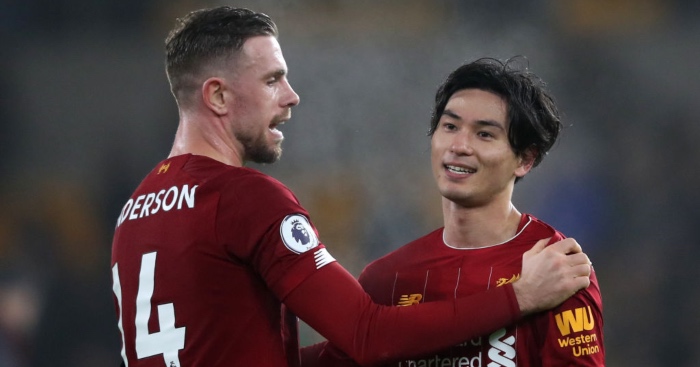 Send your thoughts on how Liverpool will look in 2022 to theeditor@football365.com

DOF TBF LOL
There has been a lot of angst against Ole and Manchester United in the mailbox recently and I can understand why. True, this season has been pretty decent and probably the only season I actually enjoyed watching United’s matches since Fergie left. Also helps that we started the season in dismal form yet managed to finish 3rd despite looking like we would be nowhere near at the halfway point.

But where are United heading in the medium term is the question. Let’s say we buy a great CM and RB this year. We are still nowhere close to winning the title. Fast forward one year, and we need another midfielder, and a defender to replace one of Lindelof and Maguire. Ready for a title challenge? No, not really. We still need another forward (preferably an elite striker) and perhaps a replacement for Shaw? Surely, we are ready for the title now? But oh wait. We still don’t have a decent backup for Bissaka, or a backup CM. The midfielder we bought didn’t work out so we go kaput the moment either of Pogba or Bruno gets injured. The team’s only just good enough for a top 4 as we still don’t have squad depth. Three more years gone (4 and a half with Ole at the wheel) and we are still counting the 4th place trophy.

And that’s the issue. Ole may be decent or even a great coach but without a good Director of Football, we will become the next Liverpool, delusionally thinking every year that next year may be our year but never being able to bridge the gap.

What Klopp has pulled off at Liverpool and Pep has been at City, is partly due to good coaching but also because the clubs have been excellent in the transfer market. That is not down to the managersBeing able to find excellent buys for 30 to 50 million but also the diamond in the rough for bargain prices and additionally, being shipping out underperforming or unwanted players at decent prices. Same applies to clubs like Bayern, Borussia and a host of others who manage to have far better sides despite spending a fraction of what United are spending.

Right now Barcelona and United seem to be following the Galacticos policy of Real Madrid over the previous decade. But while Real Madrid paid record amounts for the cream of the cream, both Barcelona and United are paying record breaking sums for very good players, but hardly superstars. Sure, being able to spend 200 m every summer will help improve results. But the spending has to be much much better if United hope to be in contention for the title any time soon. And that’s down more to United not having a good DOF than Ole being or not being a good enough coach.
Adeel

I don’t know if Sancho is worth 110 million pounds. Do you know who else doesn’t know? Joel effin Glazer.

Can we have a Director of Football now please?
Ryan, Coillte

The future Liverpool
Just writing as a pool fan with some thoughts of what our two teams might look like next year.

Now thankfully most people realise Klopp is more than a great manager/hugger I think the current misconception is that he has a “way to play” with Liverpool.

I hear this on Liverpool podcasts (and I’m sure we are no different to fans of other clubs in this regard) where fans argue over where Minamino (Firmino’s long term replacement apparently) is going to play and how Rhian Brewster needs to work on his Firmino-ness I order to fit into Klopp team.

For me Klopp is the ultimate pragmatist. He arrived in England off the back of his Bayern days where he played 4-2-3-1 with Lewandowski and Goetze operating as 9 and 10 with grosskreutz, reus and blaszczykowski on the wings. When he arrived at Liverpool we did not have an out and out target man no. 9 (Benteke was there but deemed not up to scratch) but we did have Firmino. We did not have touch line hugging wingers either but instead Klopp identified two natural inside forwards with an eye for goal. No natural 10 so he made the wing backs our source of creativity. 4-3-3 became our formation and the rest is history. Like I say, pragmatism with a side order of genius.

Looking at our more recent signings to me it looks like Klopp is creating a backup 4-2-3-1 for the pool that we will see emerge this year.

Minamino was devastating as a 10 when we played against him but needs an out and out 9 with natural last 18 yard instincts to play off. Rhian Brewster is being written off by many Liverpool fans (Mbappe 2020! When are we replacing the front 3!) but for me he is being groomed for a future role as a more out an out 9. Harvey Eliot naturally brings width and trickery from the right but with less penalty box activity than Salah and if links with players like Ismaila Sarr are true then there’s your left sided player. Thiago is an ideal player for either system but would sit beautifully in a double pivot with any one of Fabinho or Henderson.

With back up players across the back line, in midfield and up front and two fully operating systems to consider before every game for the opposition and succession plans operational could this be Klopps next move.

The scary thing is his plans are usually way better than ours as fans.

What a time to be alive!!
Dave LFC

El Ultimo Baile
The Last Dance in Spanish. Azken Dantza in Basque but I preferred the Spanish translation.

For those that haven’t seen the Chicago Bulls documentary on Netflix you need to. Greatest ever player has a season left. A great team has run its course and will disband at the end of the season, a manager has been told he has 1 season in the job. Sound familiar ?

Firstly everyone loves a rebuild. Chelsea, Utd, Arsenal, Spurs, Liverpool, pretty much all clubs seem to require one when in reality it never works out that way. The Barca squad isn’t that bad, Quique Setien was just the wrong man.

Barca always play 4-3-3… not with this squad. Also Koeman is more a 4-2-3-1 man. This formation would fit the team better too but the players need to be won over. Also Messi needs to play on the left (I’m hoping El Ultimo Baile gets him to put his ego away).

If you pay over 100m for a forward at least play him in his best position. Coutinho was isolated out left at Liverpool but was deadly as the number 10. Messi used to play out left and with 2 def mids he doesn’t have to track back.

Selling Umtiti and getting Upamecano would be good, and I know Sergi Roberto is a weak link but having that attacking line up means the full backs don’t have to commit as much and the 2 def mids provides protection to the back line.

No money spent, everyone gives it a final push, Pep then joins Barca next year with a new president and a rebuild to begin.

It’s not rocket science this is it ?!
Hong Kong Ian (available as a DoF) LFC

P.S – please get Degsy out of bed, we miss him and I need to discuss season accumulators with him……

I couldn’t agree more with Dan’s mail this morning. Barcelona are a hot, sticky mess. Their main problem is that they are paying 70% of their revenue in wages to a bloated squad of declining superstars. For comparison, Liverpool pay 58% of revenue in wages to a high performing squad of today’s superstars. While the 8-2 thrashing evidences their squad’s lack of quality, the Arthur-Pjanic swap deal is even more concerning. Reports suggest that the only reason the swap was completed was so that the club could abide by its internal financial rules and the current directors would avoid personal legal liability.

Let’s be clear, nobody is going to be interested in acquiring Suarez, Pique, Alba, Busquets or Rakitic. At least not for a fee that would properly help Barcelona out. Unfortunately, they are probably going to have to swallow their wages for the next couple of years. That leaves Messi as the only older squad player who would likely command a significant transfer fee. City or PSG would certainly jump at the opportunity – even if just for sports washing reasons – to sign him and likely have the cash to do it. As well as receiving a much needed sum of £100M+ in transfer fees they would also get their highest paid earner off of their books ( £26M+ annually).

To be realistic Real Madrid are clearly in a much better position domestically. In addition, they are in the financial position to improve their squad further. Consequently, it is hard to see Barcelona winning La Liga over the next two year. Furthemore, Barca are nowhere near as good as Bayern, Liverpool, PSG and City. So their chances of winning the UCL anytime soon seem very remote. Better to sell Messi now when you will get some cold, hard cash for him than let him leave for free next year.

Real Madrid knew when it was time to move on from Ronaldo. Barcelona should have the same sense with Messi.
Oliver, London

Finding another team
Can I suggest Hibernian? Great youth team setup with regular promotions of the youth players into the first team, tend to (try to, anyway) play attacking football, and very well run off the pitch.

And Klopp for Europe

The logistics having multiple managers at a club is something that blows my mind, how you could have the styles of Pep Guardiola and Jose Mourinho being applied to the same team, it just cannot be done, just think of those attacking players that dread the Champions League when they have to track back and arent allowed out of their own half, but still the idea is a great concept and I am all for a mind boggling concept, so here are my picks if a club could have multiple managers for competitions:

Premier League: Sir Alex Ferguson, Destroy, Rebuild, Win, that is what SAF did on a consistent basis, built multiple squads and lifted 13 titles, will that record ever be beaten?

FA Cup: Arsene Wenger, when you’re the manager with the most FA Cup trophies at 7, which is two more than Sir Alex and Aston Villa’s George Ramsey you cannot pick anyone else, he took that shambolic Arsenal side to three FA Cups post 2013, fair play.

League Cup: Pep Guardiola, City have won the League Cup for the last three seasons, need I say more, he is not guilty of over thinking that tournament at all.

UEFA Champions League: Zinedine Zidane, it is HIS competition isn’t it? However he did have Cristiano Ronaldo in his side, but as Juventus showed, that does not always result in lifting the trophy.

But if we are only allowed two managers, one for the domestic trophies and one for Europe, then I would choose Mircea Lucescu for domestic trophies, won a league title for 7 different sides, domestically dominated the Ukraine from 2003 to 2016 and picking SAF is just far to easy so I am being different, however when it comes to the Champions League it has to be Bob Paisley, Zidane may have won 3 in a row but Bob did not have Ronaldo up front.
Mikey, CFC

Wet Tuesday night, Stoke, etc
Sure Jamo, Ronaldo’s play acting would be shown up in the PL. I can think of no compelling evidence that he could do well in England…
Andy (MUFC)