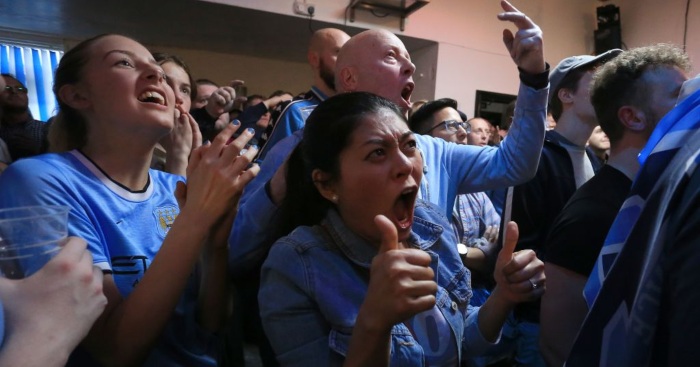 Thanks for your mails so far. Keep them coming to theeditor@football365.com…

Football chat in the time of COVID
Once upon a time we were cavemen and lived in caves, we only came out when completely necessary scared of the unknown, unseen threat outside.  The limited forays out of the cave were to hunt for meat, scavenge for fruits and plants and to find items that could improve our caves.

We then took over the world, collectively harnessing our unique and strongest organ our brains.  We created many beautiful things including football, suppressing mother nature to within an inch of her life, so mother nature took her revenge and has put us back in our caves.  We are now COVIDmen.

What has this to do with football I hear you ask?  Well like the early cavemen, this new species of COVIDmen need to adapt to survive and even thrive.  Football as we know it is gone and may never come back as it once was.  Do I have an answer to keep playing football? No.  However, football filled many other aspects of our lives, the social elements of football.  This is the bit I’m missing, going to the pub, having a pint and talking football.

So here is the answer – COVID Football Chat, or CVFC as it will be known as.  The principle is simple, I just want to chat about football to my mates. So, here’s the deal, you invite a few of your mates to a Zoom call and you chat about football.

There are 3 rules of CVFC:

The process of the actual call is as follows, someone chairs the chat, sets up the zoom call and invites the other friends.  You all get on the call and the chairman decides a topic to chat about.  This week in my own CVFC we will be talking about a combined Arsenal, Spurs, West Ham team of the 2000’s.  Each of the chaps will come prepared with their favourite players and will need to argue why they should get into the combined team.  We will have an online collaboration whiteboard such as Mural or Miro where we can place the names of players and move them in and out as we discuss.  We will have YouTube to show clips of the player to help argue the case.  We will have Wikipedia to show the facts.  We will discuss football over a pint.

So, we are now COVIDmen and live in our houses, we only come out when completely necessary, scared of the unknown, unseen threat outside, limiting our forays out of our house to hunt for meat, scavenge for fruits and plants and to find items that can improve our houses.  But, unlike the caveman we now have COVID Football Chat to enhance our lives, so I implore all your readers to set up their own CVFC groups and do what we all love again, chat about football.

Stay at home, Save the NHS and talk football CVFC style.

Blame the footballers…
Its is difficult to understand the blame being placed on the players in this on-going controversy on wages. Are footballers salaries supposed to fund UK’s NHS? Why is the health secretary of UK asking footballers to take a pay cut. Surely his motive isn’t to divert public attention from the ongoing health crisis and any critiscism to his government’s response.

How can clubs like Burnley, Everton etc. afford to pay its staff and footballers but mighty Tottenham with their fancy stadium can’t. They did just declare record profits owing to their CL run.

Were Tottenham players ever given a chance to make a contribution to fund staff wages. Or was the furlough an unilateral decision to force pay cuts. The announcement from the likes of Levy and Ashley are nothing but pressure tactics intended to force PL players to accept unilateral wage cuts without accounting for actual impacts in cashflows. They want players to agree for wage cuts not deferalls. When there is no clarity about how the football season should be ended, whether the remaining matches would be played or not, why should players accept wage cuts. Wage cuts are permanent.

I am not from the UK. This does not affect me. You might ask why i am arguing for folks who will earn more in a year or 2, than what i might earn in my whole lifetime. But, I am tired of seeing top management in businesses taking all the praise when things go well, but blame everyone else when thing go shit. Remember, these owners are equity holders. When this crisis is over, dont be surprised to hear about record dividends being awarded to them.
SM, LFC

Of course none of us, including the clubs and football administrators, know what is going to happen to the 19/20 season, because we don’t know how long the current shutdown is going to last for. One thing is certain though, in UEFA/FIFA’s mind club football is not as important as international football. In the summer of 2021 we now have major international tournaments in Europe, South America and Africa, so the 20/21 club season must finish on time. After that they will be shifting seasons round again in order to squeeze the 2022 world cup into November, but that is for a different day. Even if we had a best case scenario, and the 19/20 season finished in July, it will be a challenge to play the 20/21 season in full. If it goes on beyond the summer, even dropping domestic cup competitions won’t make the difference. So it seems to me that next season is going to be compromised no matter what. They may as well play out 19/20 whenever they can, and work out from there how to cope with a truncated 2020/21 season, maybe playing each team once instead of twice. That way things will be back to normal by next summer. Except of course the messing round for the 2022 world cup, means we might not see a normal August to May season again until 2023/24!
Colin Lawton, Galway

Earliest football memories
Edwins email this morning about his earliest football memories has got me thinking back to times I might never have thought about again, had I not taken the time to read his contribution this morning. My earliest football memory is probably playing football at school. I can’t have been any older than maybe 5 or 6 I don’t think, and it was, if I’m honest, a totally confusing experience. I remember not really knowing what I was doing, or what the point of the game was. I’d just run around chasing the ball, and if I got to kick it a few times I considered that to be time well spent. We all got kicked, and dirty and desperately tired, and I didn’t understand what we were all doing it for, but I went along with it anyway. That was my first football experience, and thinking about it now, nothing has changed. I’m still completely terrible at playing the game, and always have been, and it only makes marginally more sense to me now than it did 30 years ago, running around in my market stall bought, replica strip. I have some other vague memories of going out on penalties against Germany in 1990, and again, not really understanding what the fuss was about at the time.

Anyway, should probably get back to doing some work. Hope everybody has a good weekend.
HarryB

Well Edwin Ambrose this morning certainly brought up a topic that we can all get involved with, our earliest memories of football, well for me it is a strange mixture so I will just break it down into sections;

– Football Memory In General: McDonalds France 98 World Cup Toys, you know the ones, the frissbee, that kite and also the world’s most useless watch all as a nice freebie if you bought a burger and small fries.

– World Cup Memory: 2002 World Cup,  being able to have the morning off from school so we could all watch the England vs Brazil Quarter Final, my mum even made our family a lovely cooked breakfast, I was 8 at the time and also it introduced me to Ronaldinho and that incredible side.

– European Championships Memory: France 2-1 England in the opening group game, that game and the come back lead by Zinedine Zidane I will never forget.

– Champions League Memory: Late September of 2004, Wayne Rooney’s hat trick against Fenerbahce, in particularly that free kick to seal it, a goal you just knew was coming in before the ball was even kicked.
Mikey, CFC

Odd allegiances
We’ve heard it countless times: “My Dad was an XYZ and his Dad was an XYZ so I am an XYZ”, or “ABC was winning a shitload so I started following them and have done ever since.” Or even, “such and such was a sublime player and I just fell in love with the team.”

Maybe you moved to a new area as a child, and started going to a particular club, and have been going ever since?

But what about the odd allegiances? Whilst mine isn’t all that odd, I certainly didn’t follow the so-called natural order of things.

Growing up in Manchester in the 70s and 80s, and living nearby Old Trafford, I was surrounded by reds: my family, my friends, my school, and strangers. I couldn’t avoid it/them. Indoctrination on a mass scale, if you will.

So I became a blue.

It just felt ‘right’ to me – going against the grain if you will. Of course, I suffered for years because of my decision (admittedly not so much these days), but I stuck with them through thin and thinner.

I am sure some fellow mailboxers will have far more interesting stories, so let’s hear them.
Mike D

The president of the Belgian Pro League has called for the season to end now, after 29 games. If that were to happen, Club Bruges would be champions (they had a 15 point lead but there’s usually a complicated play-off phase at the end of the season).

The clubs meet in a couple of weeks to make the final decision.

This is the pragmatic option and doesn’t void the season -but would still be anticlimactic, bringing muted celebrations.
Paul in Brussels

Only scenario in which to void season
Here’s how it will pan out.

The covid-19 crisis will ease off but there will be further months of restrictions to stave of risk of major second wave. The solution for PL will be to finish off this season. That will require some form of  pre-season to get players back to full fitness. I wager a ball may not be kicked in front of a crowd again until Christmas time. Crowds will be required given possible legal challenges and financial challenges. CL can finish in similar way. What should be voided is the following season. Skip a season so things can get back on track for 2021/22 season. Bonuses will be:

1 – no anger over relegation/promotion/champions.
2 – FA cup can take centre stage!!
3 – perhaps a modified shorter premier knockout league can take place with no bearing on CL or relegation- a champions league format for premier league perhaps. The placings from THIS season (when finished) will determine CL qualifiers/relegations for 2021/22 season.

I write this as a Man Utd fan who finds idea of Liverpool with an asterix very funny but this idea is fair, workable and the best solution available.
Anto, Dublin

To whom it may concern (in this case everyone)

To all the non Liverpool fans calling for the season to be voided in the interests of fairness ( yeah, that’s why you want it called off) I propose that all Premier League seasons to date be voided to ensure the integrity of any future campaigns. I await the plaudits

Cheers
Seán (bored out of my tree) LFC Dublin