Spurs were rotten. Everton were great. We have mails on both and more. 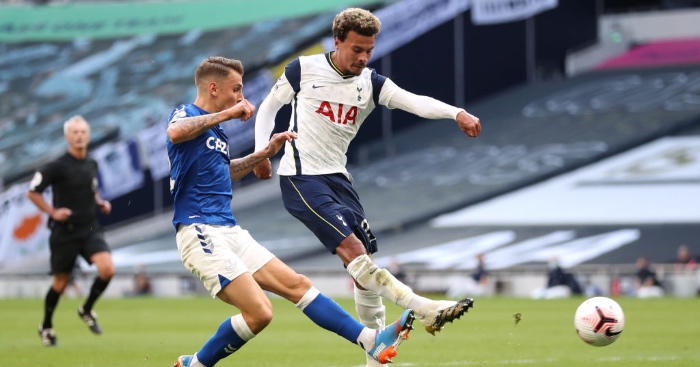 Spurs were rotten. Everton were great. We have mails on both and more. Send thoughts to theeditor@football365.com

Give Arsenal the title
Top of the league on alphabetical order. I say end the season now. With Coronavirus cases getting high again, it’s the only ethical thing to do. Any life risked is a life too many. That’s still the case right?

We would have an asterisk by our name, but I would be willing to take that.
Adonis (Champions?) Stevenson, AFC

Assistance please
So Willian got a hat trick of assists. Did he though? The whole thing has got me thinking about what constitutes an assist. The first goal he had a shot blocked that fell to Lacazette. Is that an assist? Yes and no? I mean he didn’t intend for it to fall to Lacazette did he? He wanted to score. Splitting hairs but it’s set a little wheel spinning in my head.

Second goal no question. He crosses, one touch later the ball is in the net.

Third goal, he sprays a nice pass outwide, Aubameyang finds the top corner á la a certain French guy. Was it an assist from Willian though? Aubameyang still an awful lot to do to score that goal. To take an extreme example, if someone passes Messi the ball, he beats 4 defenders and slots it, will the other guy get the assist? How far back in the play do you go? What are other mailboxers thoughts?
Alan (late Sunday night) Córdoba

What was that Tottenham?
Spurs were utterly, utterly abject against Everton; that second half is one of the worst things I’ve ever had the misfortune of watching. There’s no shame in losing narrowly to this talented Everton side, but there is total humiliation in losing in such a dull, insipid, uninspired and totally aimless manner.

Tottenham resembled a not-very-good secondary school side: every player knows roughly where he’s meant to be playing and then they chase after the ball in a rough 4-4-2 shape with no further plans or ideas. They had no clue what they were meant to be doing. They had no idea where a goal might be coming from.

Jose’s had two transfer windows and 10 months with these players, what are Spurs trying to do? What’s he been doing with them over the summer? What’s their style, their identity… what are they good at? It’s not keeping it tight or knowing how to defend, it’s not strength in possession, or on the counter-attack, or at creating chances around the box, or at pressing. In the past you could often fall back on Mourinho sides ‘just finding ways to win’ but this is the kind of team who takes the lead twice at home against Wolves and loses 2-3.

Instead of combining Pochettino’s naive and carefree level of high performance with a bit of big game, trophy winning steel, Mourinho has managed to throw away every positive aspect but maintain that core Spurs element of being totally bottleless.

With any manager worth their salt it should be straightforward to identify what kind of football they want to play after nearly a year in charge. In Pochettino’s first season when the results weren’t extraordinary, at least you got a complete sense of the kinds of changes he was trying to make and what he wanted the side to look like. Mourinho thus far has managed to back up his very mediocre results with an unwatchable brand of football and tops it all off by being a massive c**t.
Will, Spurs

…After that second half from Spurs, Harry Kane must have given the half f##king time team talk…
Schlomo Jenkins

Giddy about Everton
Well, what a difference a month and three signings makes. Spurs were left chasing shadows. That was us last year. I know it’s only one game so no going overboard but a very big win for us. Everton have signed players in the past but the one issue Everton have had since Moyes is mentality. We don’t have a winning mentality. Hiring Carlo Ancelotti, a proven winner, will hopefully change the mentality. Today was a good first step.

Special mention for Jordan Pickford…excellent match for him !!!
TX Bill (it’s just one game but we’ll take it) EFC

How much for Richarlison though?
Somebody please tell me that 85 million euros Barcelona offer for Richarlison a few months ago was satire… and Everton turning it down was just to rub the ridicule in. No conceivable way in this universe that was sound.

What have they been smoking at the camp nou for years now…
Raúl H. García (Everton is gonna be mighty fine this year!) LFC YNWA 1892

Could Bale do a Coutinho?
A season loan for Bale to Man Utd makes a LOT of sense. The fluidity of Utd’s current front three means that any of Greenwood, Martial and Rashford could be rested, dropped or rotated without a Lingard or James-sized drop in starting 11 quality. This is so important for a uniquely compressed domestic and European season where Utd need to finish 3rd/4th in the EPL and QF/last 16 of the Champions League for Ole to justify getting Utd on an upward trajectory.

The short termism of Bale suits Utd this season. Buying Sancho doesn’t. One is young and inexperienced in the Premier League, the other will hit the ground running. Buying Sancho would feel more like a starting 11 replacement (probably for Greenwood) whereas Bale’s age and injury record suggests they’ll all get ample game time. Greenwood is still only 18, and looks like he needs the right balance of development on and off the field, especially now he’s starting to make the front pages instead of the back (laughing gas rumours today). I think Greenwood wouldn’t view Bale as “stealing his position” the way he might with Sancho. I also imagine Daniel James would be in awe of his national hero and probably learn a great deal from him (shooting, passing, using a 3 Iron…).

Most importantly, Bale needs to be playing. I know he’s happy pocketing stupid money and loving his golf and sunshine in Madrid, but truly world-class players should be playing. We all miss out when football’s elite don’t feature.

Best of all, with the lack of cup tie rules in the Champions League, you can imagine him doing a Coutinho to Zidane and co when Utd meet Real in the last 16. Imagine the celebrations. They’d need a new flag!
Graeme (or Ramos crocks him!) Glasgow

Klopp losing the plot?
I’ve always defended Jurgen Klopp, but after reading his post-match comments, I feel he may be losing the plot. The quote in full:

“The back line played for England, Holland and Scotland four days ago – all top teams but different ways of defending.”

Condolences to DD
So there is was, enjoying my traditional Sunday morning perusal of the magnificent F365 Mailbox, accompanied by some responsibly sourced Ethiopian coffee, and a Sourdough Sausage sandwich. Fit me into whatever bracket you like, but I like to set a scene.

I was enjoying the two Liverpool fans losing their sh*t over F365 writers penning articles based on their own opinions, and telling their version of the game they watched. It is a growing trend, one that I have chastised supporters of my own team for, and one that I don’t like. It’s an article on sport, don’t let it ruin your day.

Anyway I’ve digressed, where was I? Oh yes, I was enjoying the mails, a return to dissecting the results, the zing for Mike Bloody Dean and the Duck pointing out the rather odd helmet trend on display amongst the excellent Leads team, when I spotted myself, name checked in a mail early doors, and was saddend to read the remainder or the paragraph.

May I just say condolences to DD, hope you’re able to get over the loss of your trusty canine friend soon.

To be honest, that was the entire reason for this mail. Nothing else football related to say. Just wanted to offer some words of kindness to a fellow fan.

Liverpool’s defence was fine
First game of the season last year Liverpool ripped through Norwich at will but also gave Norwich loads of chances. Norwich didn’t take all their chances and Liverpool were called rampant winners.

First game of the season this year, Liverpool ripped through Leeds but also gave Leeds a few chances. Leeds scored with almost all their chances and it’s considered that Liverpool’s defence was rubbish?

Norwich had 12 shots, 5 on target. Apparently almost triple the xG of Leeds. They were just rubbish at finishing. Leeds finished unbelievably well. Give them their credit and accept that Liverpool’s defence hadn’t changed much.
Joe lfc

More mailbox thoughts
Seems pretty easy really. Leeds were very positive and will be a breath of fresh air, both side and manager. Across the Pennines, City are a soulless club, in spite of having some brilliant players. It doesn’t feel earned and so doesn’t have value.

By the way, it’s hilarious seeing the Liverpool fans – reigning champions at very long last – whining about City getting touted for the title. Jesus guys, you won. Suck it up. You are there to be knocked now. Enjoy!

Finally, would it be ok if the site started to develop some new jokes? The Phil Neville ladder joke is over 10 years old.
BadWolf