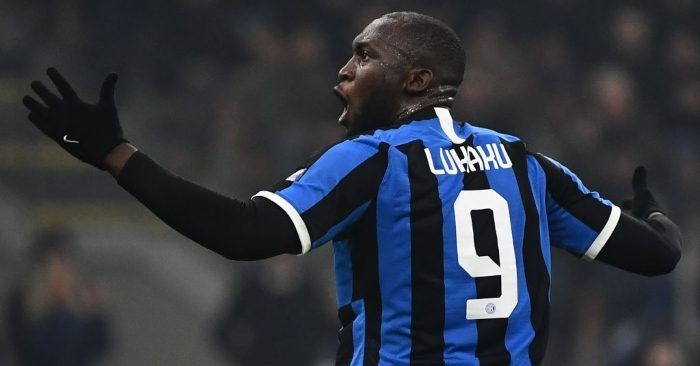 Thank you for your mails. There weren’t many. If you want mailboxes this week, it’s down to you guys. Mail theeditor@football365.com

Oh Man Utd, you really f***ed it with Lukaku
Watched the Milan derby and was once again reminded why selling Lukaku was such a terrible decision. What a player. He wants the ball, first off. Knock a desperate one up to him from defence and he’ll gain you 25 yards up the pitch at the very least. His runs off the ball are brilliant, he’s under-rated at finding a pass and he’s an exceptional finisher. As F365 have mentioned more than once; he got to 100 Premier League goals younger than any non-English player and that was mainly at West Brom and Everton.

At United he had one good creative player to rely on in Pogba but he was frequently either injured or unmotivated. Other than that, he was hoping the likes of Henrikh Mkhitarian (who spends most of his time on the Roma bench now), Antonio Valencia or Scott McTominay could pick him out with a defence-splitting through ball or pinpoint cross. He had to look on while the spiritual sons of the Spice Boys wasted most of the chances he created himself.

And I think his international record should head off any ‘But it’s the Serie A’ retorts. He got the Bronze Boot at the last World Cup and became the first player since Maradona to score a brace in consecutive World Cup games. Just like anyone, when you put him in a settled environment with a coherent plan and motivated colleagues, he’ll get you results.

Romelu Lukaku is world class and any club that would sell him didn’t deserve him in the first place.
Eamonn, Dublin

No optimism from this City fan
Much as I would love for Alex Keble’s article on Guardiola to be true, I’m afraid it is, at best, overly optimistic. I particularly disagree with his assertion that:

‘New recruits are secondary to reigniting the fire of the current crop, but here, too, there is cause for optimism. Playing for Guardiola is fun. His passion is infectious. The players don’t burn out, only he does…’

Back on 4th November, I wrote into the mailbox in response to an article by Sarah entitled ‘Mentality monsters’. The gist of this was my querying whether it was possible to maintain the insanely high standards set by both Pep and Klopp, for three seasons in a row. I questioned how, after two seasons where 198 points were accumulated and five trophies won, Guardiola could ensure that his players kept up the ridiculous intensity required to achieve that level of success (again). I pointed out that the main players must have heard just about every uber-inspirational speech and hair-dryer rant that he has in him. In summary, I suggested it couldn’t be done.

Three months later and it’s Spurs v City. A game that neatly encapsulates my point (and our current season) I think. Lots of possession and some neat, even great, football but also multiple passes going wildly and uncharacteristically awry, players taking one touch too many or not enough. ‘Sitters’ and a penalty missed. In short, the team playing at 80-85% and not the 95-98% of the previous two seasons. A team playing when they lack the total confidence they previously had or when things are not as they should be in the dressing room. Or (God forbid) both. I’m not suggesting that the players are ‘burnt out’ or that they are not consummate professionals, but I do wonder what their current level of motivation is. To clarify, and if my main point is right, then if Liverpool were to retain the title next season, it wouldn’t be in excess of 95 points.

There are other worrying signs which go against Alex’s headline that ‘Pep just needs signings and time to topple Liverpool’ such as:

1. Pep’s been trialling some ‘interesting’ formations recently and with mixed results.

2. He started Foden against Fulham (Hurrah) but put him out on the left whereupon he consequently had a mare of a game (Boo).

3. I don’t know why but Sterling has recently reverted to what I would describe as the player he was before Guardiola arrived and yet he (Pep) continued to start him.

4. He couldn’t figure out how to beat ‘this’ Utd team. Or Norwich.

5. City clearly need to strengthen in the areas Alex mentioned but no new signings have been forthcoming in the winter window.

I know it sounds like I’m complaining about arguably the best manager in world football today. I most assuredly am not but thought it right to rebut Alex’s (in my opinion) overly happy-clappy view of where we are at the Etihad right now. I simply think that there isn’t a squad on the planet that can meet the super-human expectations of unique men like Guardiola (and Klopp) for three seasons one after another in, and this is an important distinction, the PL. And this is also why he, seemingly, has a four year ‘cycle’. I think it is also important to understand that both Txiki Begiristain and Ferran Soriano have a proven history of planning far, far ahead. Pep himself was the main target as manager long before Pellegrini was appointed. That’s why, rightly or wrongly, I’m reading more into the fact that nobody was signed in the last few weeks than others might perhaps do. It’s also why I think the rumours of a significant overhaul in the summer may just be on the cards. Why? Because I think Pep may be off. I hope to all that is Holy that I’m wrong.

I watched my first game at Maine Road in 1972 and, as such, I’ve got far more ‘mileage of misery’ under my belt than I have of the unbelievably exquisite experience that has been the past three seasons or, more accurately, the last eight years (in terms of trophies) for that matter. As such, this mail in its entirety should be read with that firmly in mind. That is to say, ‘Typical City’. A mindset I still struggle with or, more accurately, have failed to change.
Mark (We’ll see!) MCFC

More Moyescuses
I see David Moyes is getting his excuses in early for his start at West Ham – firstly blaming the officials by saying “decisions have not gone our way” and begging for “50, 60 thousand fans to turn up each week” to help “influence decisions”. That’s a start. Why would 50,000 people show up to watch a team in the bottom three who got turfed out of the FA Cup by getting beaten at home by a 10-man West Brom and has won just one of Moyes’ six games in the league?

Then he goes on to write his own version of history – “Since I’ve come in, I’ll have .. have to have faced Liverpool twice and Man City in that short period of time”. Except he hasn’t. He’s played Liverpool once. He might have matches to come against those two opponents, but you can’t really twist the facts to suit your own narrative, unless he’s been taking lessons from various world leaders.

I’m still waiting for him to make good on his opening press conference and prove “that’s what I do, I win” rather than blaming the fans, the officials and a fictitious fixture list.

On the plus side, the lovely NBC Sports is now carrying Sky Sports News so I can watch the aforesaid ‘winner’ make his dubious claims.
Steve, Los Angeles

Throw the book at Dele
What are the chances that the FA charges Dele Alli over his racist coronavirus video on snapchat, where he suggested that all Asians have the virus? I won’t hold my breath. It might seem insignificant in Europe, but it’s no joke over here in China. Over 40,000 infected, 909 dead and even cities which have mostly avoided it (like where I live) are under complete lock down. Streets are barricaded, you can’t get in or out of housing estates/ blocks of flats without your temperature checked and a pass from the local government. In a lot of places, only one person per family can leave the house once every two days.

People are genuinely scared to go outside but Alli thinks it’s funny to share a video of him in face mask and hand sanitiser (two things in very short supply over here) because he’s sat near an Asian man. I’m sure there will be some ‘hilarious’ coronavirus chants directed at Ighalo when he plays for Utd but, before you join in, spare a thought for the billion people over here suffering while you have a laugh at their expense.
Kirk, China

Spread the money
I’m in favoir of the Premier League money being more evenly distributed down the divisions. Think of it as an investment for English football. We don’t need any more 100mil players with 250k salaries. What we need is more people to be involved in this beautiful game, so to unearth more players like Vardy, who wouldn’t be playing now if it weren’t for the lower leagues. Clubs that claim we should have less teams are just thinking of their own pockets and don’t think about the long term consequences
George, LFC

Windy goals?
So Storm Ciara caused a fair few postponemented matches yesterday, from City vs West Ham and all the Women’s Super League matches, but what I want the Mailbox to think about and write in with is what are there favourite ‘wind assisted goals?’
Mikey, CFC

Boom
Not sure who was commentator for the Leeds v. Forest game in the UK. In the States we had John Driscoll. Around 18 mins in Sow fouled a Leeds player.

As we all watched the replay Driscoll commented: “Even in slow motion, took a while to get there.”