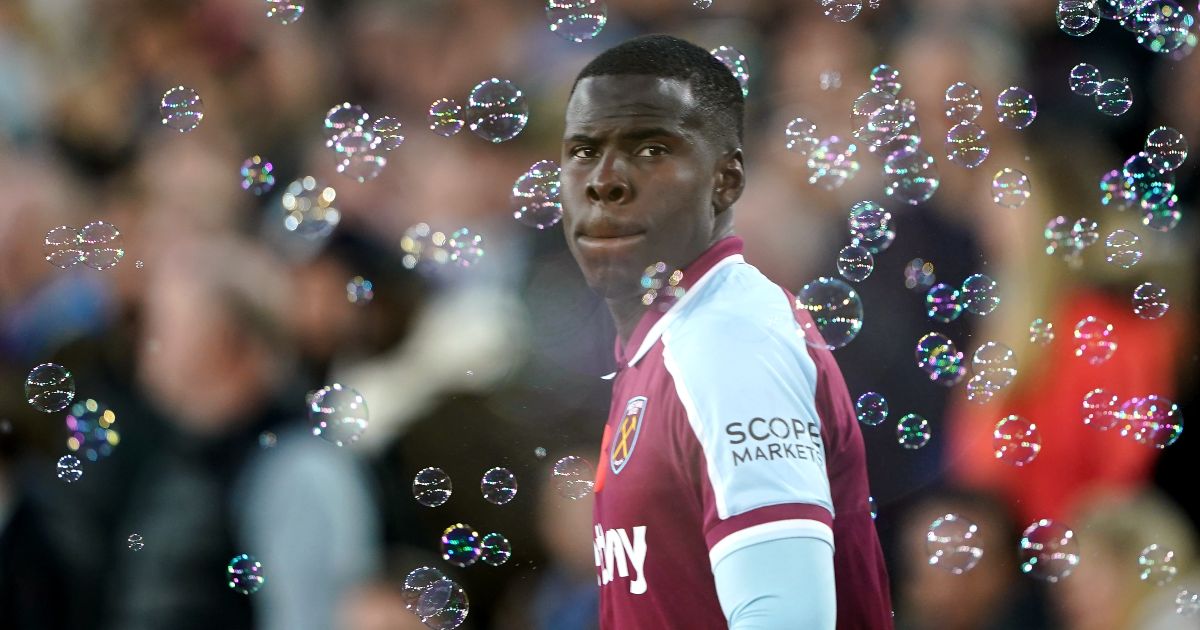 Should West Ham sack Kurt Zouma for kicking and slapping his cat? Why the Mo Salah outrage when Sadio Mane was also made to take Senegal’s fifth penalty?

Kurt Zouma
I enjoyed the article on Zouma beating the hell out of a cat. I say enjoyed, I mean clenched my teeth so hard in anger that they squeaked.

I’m astonished the Met have found time to release a statement saying they won’t investigate what with all the other things they’re busy not investigating. To be fair to The Met they’ve been very clear that offences that have already happened aren’t worthy of investigation, until they’re investigated by a third party. In which case the results may not be released by the third party so that any future Met investigation that will not happen is not hampered.

Unless you’re poor and black or a woman or the leader of the opposition in which case as much of the truncheons, tear gas and clothes being cut off as you like.

I haven’t watched the video of Zouma abusing the animal as the description alone is enough to upset me, so I can’t pass specific comment.  I would say that anyone who treats an animal the way this has been described should not be permitted to own pets ever again, and I’d also make damn sure that social services were all over the house with regards to the well being of the children in this home environment.

Should Zouma be regarded the same as Greenwood however?

Should he lose his job, should West Ham remove him from their squad?

No. Being a shitty person to a cat or a dog is rage inducing to me and many others, but it’s simply not the same as sexual and physical assault on another human.

The court of public opinion will absolutely mean that he will be unlikely to be receiving sponsorships and endorsements for a while, which isn’t a matter of revenge or virtue signalling. Its just that he’s a shitty person who tortures cats, and no-one likes that guy.
Tim Sutton (vegan-ish for reference)

I agree with David this morning that animal cruelty is a disgrace and can be the start of a path to some very serious crimes. When children are exposed to it too then really is not on. I also agree with the article that it is difficult position for West Ham to be in. If the police aren’t going to do anything despite literally the best evidence that you could hope for that isn’t a seriously hurt or dead animal, then what should they do? What they can do is suspend him or release him but why should they do that? This a player worth 10s of millions of pound who is contributing to a business that could make 10s if not 100s of millions as a direct result of his actions. The police are aware and have run it through the can we bothered algorithm and have decided no, no indeed we cannot be bothered. Unless the RSPCA or child services get involved then Zouma is well and truly in the court of public opinion and its barely in the top three news stories of shitty things footballers have been found to be up to in 2022.

There will be some debate about what West Ham should do with him but lets all be clear on this – West Ham will want the footballer whether he’s an animal beating monster or not. It’s a football equation. For Greenwood, we’ll never know United’s response had he scored 20 goals this season and they had been in the fight for, well, any competition. But a reserve player in a season when they have shat the bed, the football equation is simple. Don’t need him, look after the sponsors and get him suspended. Compare and contrast a certain GOAT team mate of his who should be allowed a bit of time off to pop to Nevada.

If it’s a football equation, the football club can not be trusted to be independent. The amount of money now is so vast that unless it directly effects their income, such as through the loss of sponsors, the equation will always point to the footballer. Suspending a player is shooting yourself in the foot. Releasing him will just see him appear at a competing club in about 4 minutes flat.

The solution is for this to be managed by the professional bodies. By PL and the FA. The PL should have banned Greenwood and Mendy, not Man Utd or Man City respectively. The PL should be ruling on Zouma. Not that we would expect too much, but they should have no interest in not suspending a player. They did it with John Terry but that’s the last time off the top of my head. But that was on field behaviour.
Alex, South London

I’m a vegan, primarily for animal rights issues. I grew up with cats and still have one. I’ve got a tattoo of a cat. This is all to say that I am a big fan of cats and animals in general. But to suggest that Zouma could or should be sacked for the cat incident seems a bit far.

Yes, hitting an animal is reprehensible. But we are talking about a sport where multiple men are accused of sexual offences against women. Some of those have been arrested recently, some have signed for new clubs and  others have paid fees to avoid legal review and consequences and are paid huge sums and hero worshipped to this day.

Similarly, humans have been killed constructing stadiums for tournaments that revolve around money. A human has also been killed by a speeding drunk driver who also earns astronomical money and plays regularly at a top club.

Animal abuse is a terrible thing, but football has such a culture of human abuse, which we must deal with first. We shouldn’t be focusing on Zouma whilst hero-worshipping others who have got away with worse crimes because being good at football made them rich.

Your article notes that the English love pets. Well, the Premier League is a broad church of nationalities and cultures and Zouma is not English. A fine and some public charity or educational work in the pet / wildlife area feels more appropriate.
Seamus

It’s funny, though, that they all seem to have forgotten who Senegal’s fifth penalty taker was.  Yes, it was Sadio Mane.  You know, arguably Senegal’s best penalty taker and the guy who won the thing for them.  I am not hearing any criticism of that decision though, funnily enough.

They also seem to have forgotten that the list of penalty takers is given to the match officials before the coin toss to decide which team goes first.

So, we have two teams who both put their star player down as the fifth penalty taker.  They both took the same chance and it was a toss of the coin that decided who went first.

If you want to blame Salah’s “ego” because two of his teammates didn’t score their penalties, just remember that Senegal were a toss of the coin away from Mane (the trophy winner) being in exactly the same boat.

Also, Mo was down as the fifth penalty taker in the semi against Cameroon and no one said a word about that because Egypt won!

The reality is that Salah is only being criticised with the benefit of hindsight because Egypt didn’t win and, in my view, that is totally undeserved.
Neal Boland, LFC, Dublin

Seeing so much nonsense from ‘legends’ around Salah in the AFCON shootout final, saying ‘you shouldn’t put your best pen taker 5th’ , ‘his ego got the better of him’ etc.

While at the same time Senegal had their best pen taker going 5th and it won them the competition.

I know everyone wants to create a story around Salah, with him being one of the best in the world and his current contract situation and all that.

But to have an exact comparison proving them wrong in the exact same shootout yet they come out with this stuff…. mind-boggling.
Rory, Ireland

Anfield Baggio
Does anyone else want to explain to Ade (7 is coming) didn’t Diaz look tasty Guildford, that commentators apologising for profane language aired during a live broadcast is nothing new, and has absolutely nothing at all to do with woke culture (whatever that is)? That commentators and presenters have been apologising for clearly heard expletives since forever and has nothing to do with viewers generally being offended and more to do with Ofcom guidelines?

Not everything can be blamed on your perceived notion of “wokeness” or “political correctness”.
James F, BCFC KRO.

Solving negative crowd behaviour
Ok, so is there any rule that would prevent a club from imposing fines of up to £50,000 pounds on PROVEN racists, hooligans, sexists, homophobics and other despicables? Because it seems like the simplest form of punishment. Wanna come on the field to try and punch a player, get a new mortgage on your home to pay the fine. Just type out a T&C* apply at the back of the ticket, and list down all the fines on your website. So after the first moron is made to pay through his nose, there wont be a second moron.

Wanna say the N word? that’s a £50,000 price of admission. Watch the entire stadium behave their best, if such hefty fines were imposed by the clubs and stadiums themselves, rather than wait for the FA to do something.
Aman (The money from fines to be donated to charities, a win win for all involved

Mark Robbo the point that was being made was it took a while to build Klopp’s team whether it was 4 or  5 years .Also why do you get to shave off the replacement year where he got most of the season and got  to the Europa final .it’s routinely added to the PE teacher’s 3 year stint ,each had at least one window during the half year .

To Alan when Pep arrived Kompany,Aguero, Fernandinho, De Bruyne ,ottamendi David Silva and Sterling  were already in place .They already had key members of title  winning teams  and key aspects of their  speed  and creativity . Pep arrived with Gundogan and Sane in tow and then fine tuned the team by upgrading  the wing backs and goal keeper .it’s not been a whole bunch of clear outs and fine tuning and learning to win like Utd and Liverpool … doesn’t make him less of a manager , he himself acknowledges that his philosophy is  there are no projects you are hired to win

And no Fred ,no matter how he tries will never be Fernandinho or Kante , he is still a good player… Utd needs to fix this  and everything else this summer no more half measures look what Barca have achieved in a January window.

Fix the central midfield issue and any other issues as soon as possible and demand trophies.
Roode, MUFC