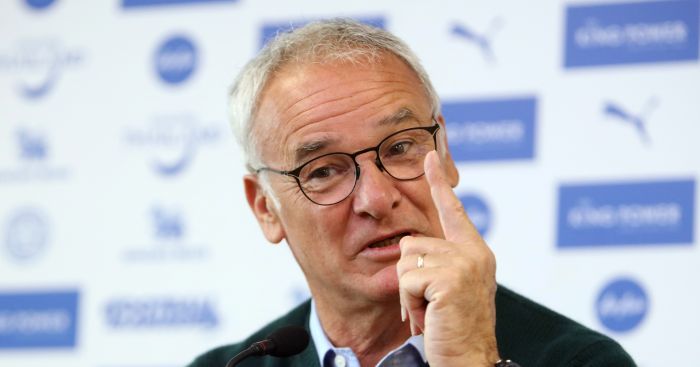 Every weekday we put together two collections of mails from readers. But there was such an outpouring of grief about Claudio Ranieri’s sacking that we rushed out another. You can contribute by mailing theeditor@football365.com

Bonkers
What’s the only thing more bonkers than Leicester City winning the league? Winning the league then sacking the person responsible in the middle of the following season.
Orlando Cantell

…Wow, I…I’m trying to write in, but I can’t. My brain is broken. Just read that Ranieri’s sacked. Not that I can’t understand plenty of complaints about results, mind, but…sorry, most words I could string together.

The question isn’t ‘last title-winning manager to be sacked before the end of the next season’, not so hard, that. The proper question isn’t even worth asking: last manager to engineer a ludicrously improbable (arguably the most so in modern football history) fairytale title win right on promotion to not even survive the next year.

…Leicester City are a relegation fodder club. Always were always will be! They are deluded to think anything else! What they achieved last year was something that could probably never be fully understood! Where they sit now is the norm for a club like them! Their board are deluded and to sack CR is just an absolute shame to someone who brought them something they will never ever see again in anyone if their lifetimes…the EPL title and CL!!! This infuriates me … who the hell do Leicester City think they are!!??
Connall Tayler

…It’s very difficult to say anything about this bleak news that won’t have already been said by others. Some will almost gleefully declare that the-silly-fella’s-had-it-coming-for-a-while-and-it-was-all-down-to-Kante-anyway. Others will just be very sad at the departure of a decent man and overseer of surely the greatest sporting achievements in the modern era. Many, including Foxes fans, will be somewhere in between. Over time, people will offer reasonable justifications. However, it is a mistake to judge this situation by ‘reasonable’ standards. Leicester bypassed ‘reasonable’ some time last season.

Back in 2013, Swansea City won their first ever major trophy, the League Cup, at Wembley. At the time I remember thinking that while this was a brilliant achievement, crystallising the upward progress of an enviable club, there was also a tinge of sadness. Surely it would never be as good as this for Swansea. Everything from then on would be measured against the elusive honour of winning a major domestic trophy. Thanks to Leicester, the idea of financial strength guaranteeing success has lost traction, if only temporarily.

There is no finer thing than success when you are a football fan. There’s a buzz at games home and away, the team wearing your colours gain a gladiatorial presence, and generally, everyone concerned can puff their chests out and be very proud of what’s happening. When you add in the beautiful detail – that you have been deemed firm favourites to get relegated but instead you’re beating some of the most expensively-assembled squads in history week after week – you reach levels of pride that are only now, somehow, fathomable. It’ll probably be a one-off. It’ll probably do little to change the trajectory of an increasingly commodity-based sport. But it doesn’t really matter.

…One of those days where you can’t help but hate modern football. Especially when Ranieri was the one who made us fall in love again.

Hoping Leicester get relegated
I accept that the Premier League is the be all and end all for many these days – what with the money and the sheer terror of what relegation can bring to those bloated wage bills but this really does take the biscuit.

To sack Ranieri nine months after he delivered a once in a lifetime – nay longer – achievement stinks to high heaven and the players should hang their heads in shame. So much for their team spirit.

I really hope they go down.
Richard, Manchester

…I have a few problems with Leicester sacking Ranieri, though they’ve been pretty rubbish this season.

Firstly he is your most successful manager. Does that count for anything these days? Leicester are a middling club at best and for one crazy season Ranieri did wonderful things along with Kante and outrageous seasons from Mahrez and Vardy (both of whom Arsenal failed to sign – think yourselves lucky Arsenal fans) he deserved a full second season at least for this alone.

You’ve just lost 2-1 in Seville scoring an away goal, giving you a decent chance of getting through. If you repeat any of your previous home performances in the competition you will at least have extra time. Does Ranieri not deserve a chance at doing even more impossible things?! You are not a top club, therefore winning isn’t your only measure of success.

I was never a big Leicester fan but last season made me smile. Now I hope they get relegated and fall into the abyss.

…I really, really hope Leicester get relegated now. Last year was a one-off, a never to be repeated. They are not having a crap season, they’re having the season they should have had with that squad. The season they had the one before last, in fact. There were a couple of great buys (Kante, Mahrez), and Vardy, Drinkwater etc. hitting the form of their lives. Superb. Well done. F*cking amazing, actually.

Now this. Why do I still believe that football has even an ounce of romance left in it?! What did the owners believe would happen when they bought the club? Oh, I know new owners always go on about making themselves a force to be reckoned with, but when does it actually happen? Basically never. So Leicester, amazingly, having spent relatively little (look at Sunderland, Villa, Newcastle and a myriad others) actually win. They actually win the bloody thing. So the owners, rather than realise that they have bought, in fact, a smallish club for whom this is probably the greatest achievement/anomaly in the history of team sport, decide that they can’t go back to where they were, having done… nothing of note, really (meaning they haven’t thrown cash at it), but are happy to bask in the Champions’ League cash that is coming their way.

More fool me, I suppose. And this is from a Coventry fan who, despite the fact the Party Line is that we hate Leicester, utterly loved the fact they won. It took my mind off the clusterf*ck our club is, and made me like the Premier League for a bit. It made me feel that football wasn’t an utterly money-driven, soulless expanse of box-ticking, in which the highest paid are the least culpable. Ah well.
David (Zbrojovka and purity of crap footy on Saturday) Szmidt, Brno, Czech Rep

Thank you Claudio
I always wanted a gentleman at my club. A Bobby Robson or a Graham Taylor. Someone who I could be proud to call the manager of my team.

We finally got that with Claudio. Equally gracious in victory and defeat, wonderful with the media and a catchphrase machine. He gave our unfashionable city a personality and has become synonymous with the club.

He deserves better than Leicester after how the players/chairman/certain fans have treated him this season. We’ve achieved more than I ever thought possible. Thanks for the joy you’ve given me in your time.

A crazy old double for Ranieri
Just back from work and settled to catch up on the day’s football news on my phone. Opened up the links roughly in order I wanted to read them in new pages, starting with sad news about Ranieri losing his job. Go to the second page, my favourite Champions league winners and losers, first name in the winners section ‘Ranieri’. This has to be the first time a manager topped the winners section and was fired the same day?
JC STFC

Leicester got it right
I seem to be in the minority but Leicester made the right decision by sacking Claudio (obviously they shouldn’t have came out a few weeks ago publicly backing him but that’s a different argument).

Like it’s not like they sacked him for not challenging for the title again but they are trying to stop relegation.

Clearly he had lost the players and once that happens the board are always going to react by sacking the manager no matter how successful he has been (maybe Arsenal should take note).
Michael, Dublin

Making this about Wenger
It is going to be so funny watching the last remaining sheep defend Wenger’s latest ludicrous contract extension, whilst a manager that won the league ahead of Wenger just last season (with a quarter of the Arsenal wage bill too) is sacked.