Home Mailbox What if Arsenal won the Champions League in 2006?

Thierry Henry would surely have left sooner, but Arsenal would have just signed Fernando Torres anyway... 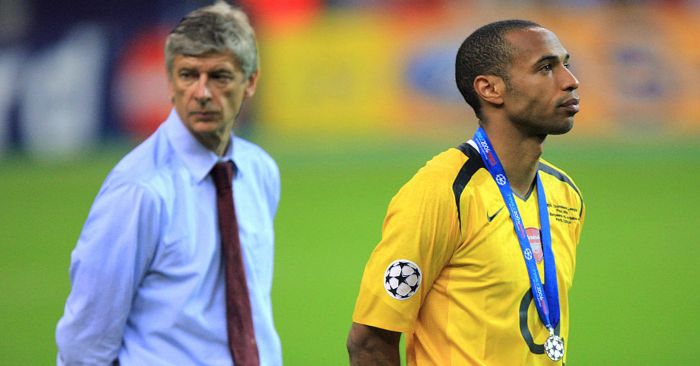 Send your thoughts on Arsenal and so much more to theeditor@football365.com if you want an afternoon Mailbox.

Load of old Hoddle
To reply to Kevin, Nottingham – that England performance against Argentina was at best excellent, more so given the opponents and the the 10 men to play against them. To lose on penalties was brutal, possibly even harsh. No real recollection of England ever being a backs to the wall kind of team, or certainly not one who have been proficient in it.

You’re likely right though, he would probably have struggled more than most (perhaps not as much as Clough) with the increasing player power of the noughts onward.

His football ability was astonishing, for myself it hindered his managerial ability. His England were better than Keegan’s. Perhaps an amalgamation of Hoddle and Keegan would have been…scratch that…that is just two loons rolled into one.
Dan

What if? The Arsenal edition
Here is an arsenal what if: What would have happened if Henry, Ljungberg or Reyes had buried their chance in the 06 Champions League final to give Arsenal a 2-0 lead against Barcelona?

Surely the game would have been over and Arsenal would have lifted the Champions League, capping a truly extraordinary 9 year period for Wenger (3 league titles, 4 FA Cups and 1 Champions League) only matched by SAF. It would have also capped off a truly remarkable Champions league season where they took on the record holders (Real Madrid), one of the 2 favorites (Juventus), the surprise shock team (Villarreal) and the best team in the world (Barcelona). What would have happened next?

Henry would have left to Barcelona. Henry was ready to leave in 06 and cited the Champions League Final loss as a motivation to stay and sign that new deal. Having taken Arsenal as far as possible, he would have joined Barcelona earlier. It is not inconceivable that his price would have been around 30-35M instead of the 16M the year after due to his constant injuries.

Since at the time we did not have much funds, Arsenal would have used all that money to replace him with a youngish option. A player they were often linked with… Fernando Torres. It is very likely the other transfers would have still happened (Baptista for Reyes, Gallas for Cole, Rosicky).

With Fernando Torres in the team, Arsenal would have finished a solid 3rd the following season. Then 07/08 comes around, Torres,  Fabregas, Flamini, Van Persie, etc all have more experience and actually win the league.

Arsenal being Arsenal however, Torres is sold to Chelsea for 45M that summer and the downslide starts.

Would this have actually happened? very unlikely. However, I do think that Henry would have left that summer with a new cycle coming in. And with those funds, I think we could have built a more robust team.

Also, is Arsenal 06 summer transfer window the only time one club has been involved in 2 swap deals? That seems to never happen.
Guillaume, Ottawa

What if Stevie G didn’t slip?
Nothing would be different as he had already given the ball away.
Matt Carr, Spurs, Wilmington, NC

inspired by a tweet Daniel Storey…er… tweeted yesterday, I’d like to propose another Mailbox topic, and it’s football grounds.

I’m all for a bit of kink when it comes to my… stadiums, so starting over here I give you the Andruv stadium, home of Sigma Olomouc. Have a look at that magnificent, ridiculous (and pretty bloody steep if you’re in it) main end. Podbrezova in Slovakia play in a two-stand effort up in a forest with views of the mountains. Banik Ostrava’s much-missed Bazaly is simply a single vast swathe of 10,000 seats. All beautiful in their own weird way.

In the UK, how about Bristol City’s Memorial Ground, the closest you’ll ever come to a Subbuteo set where someone’s bought all the accessories over a 30-year period? Brechin City and their famous hedge at Glebe Park? Lancaster City’s ground, purely because it’s called Giant Axe? Let’s have your favourite ground-based oddities.

Also, what’s your definition of  a ground and a stadium? Is it size, age, location? For me, for example, Filbert Street: ground; the King Power: stadium. The Dell: ground; St. Mary’s: stadium. But St. James’ Park is certainly big and modern enough to be called a stadium, but it’s in town on its historic footprint. Is it still a ground? Ditto Stamford Bridge. Shrewsbury’s New Meadow is almost brand new, as is Morecambe’s Globe Arena, but are they stadiums? I’d say not (and the use of Arena here is absurd).

Million reasons
While Alex, South London, proposes plenty of interesting ideas on how we could change football for the better post COVID-19, I felt his proposal for girls and boys to receive 1,000,000 hours of coaching by the age of 16 to be alarming at best.

Assuming that every footballer had access to qualified coaching 24 hours a day, from the moment of their birth, it would take approximately 114 years for a player to reach the requisite million hours.  With three senior competitions to play in (four if your count European football), I fear the intensity of this regime would only increase injury risk, especially ahead of major international tournaments.

If we apply a more realistic model of 2 hours daily training, it would take 1369 years to reach Alex’s million hours.  Still, I am concerned that the concept of a team of 1369 year-old 16 year-olds is so absurd even the Nigerian FA would balk at it.

I do understand that we are all struggling to keep track of time during this lockdown.  Nonetheless, short of accelerating all training fields in Britain to relativistic speeds, I do not find Alex’s plan to be plausible.
Jon Fonseca

Dreams do come true
So, Zlatan appeared in my dreams yesterday (No no, not that kind of dream. I’m straight).

It was a kind of random event and I beat everyone else in the line to boldly go offer my hand to him which he immediately shook. After a small chat and a hug, I smiled like a Cheshire cat and walked away mocking the others waiting in line.

And Zlatan isn’t even one of my favorite footballers.

So, I guess my question is, has anyone else had such weird dreams before? And if so, do you still remember it?
– Sridhar (A poor Indian who can’t afford to meet footballers in real life)

I enjoyed the XIs of sons of footballers, but then I thought, to make it more fun, we could have a team made up entirely of people who weren’t quite as good as either their father, their son or their brother. So here it is:

Hate-love (relationship) XI
Well apparently imitation is the sincerest form of flattery, as also demonstrated by your club, so thank you, Howard (LFC wins easily as this lot wouldn’t get the ball) Jones (btw, loved your early stuff and that guy dancing in chains on TOTP).

So as we are now conjoined through the stars of eternal mutuality in this new dawn of love and respect, I feel duty bound to admit there were a couple of decent LFC players around ( but Steve Nicol was still over-rated) so I will humble myself to an XI of Liverpool players I kinda/sorta/ish admired, however will never admit to except in the Safe Place known as the Mailbox (we’re all friends here).

GK – Allison. He’s really quite good isn’t he? And I’m trying to grow a beard like that, but failing. Badly.

RB – Rob Jones. 7/10 every week for a player that looked like Plug

LB – Joey Jones. Nearly went with Riise for his thunderbastards but with Jones you knew what you were getting into just by looking at him. Nothing spectacular but you wouldn’t pick a fight with him

RW – Steve Heighway – one of my first ever heroes before I understood the rivalry. Lovely tache and loved a touchline did Stevie

CM – Craig Johnson – Aussie accent when it was cool to have one. And the hair thing going on.

LW – John Barnes – wasted his talent at Anfield. Bit of an annoying accent but all forgiven for that goal against Brazil

F – Peter Beardsley – we let him slip through the net. Would have loved to see him at OT long term. Bloody hilarious in Atletico Mince though

F – Fernando Torres – handsome chap and seemed to enjoy just playing. Really f****d up by leaving but was kinda funny at the same time

Manager – Bob Paisley. Humble man who looked like a lot nicer version of my uncle who owned the Railway pub in Didsbury.

The Sylvan Ebanks-Blake XI
Can I request the mailbox hivemind create me a ‘Too good for the Championship, not good enough for the Premiership XI please?
Andy, Kent