Home Arsenal Don’t fall for it: Arsenal will only let you down… 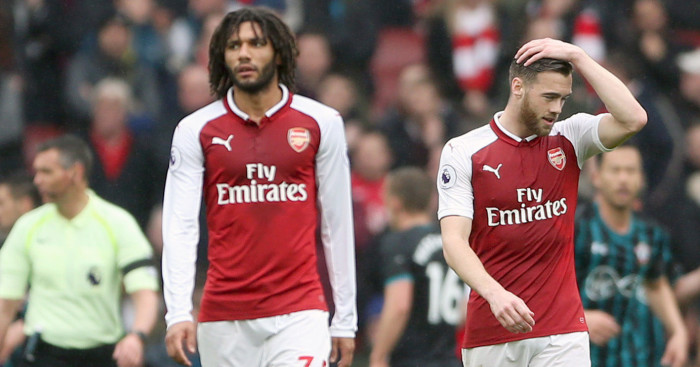 Arsenal will only let you down
Don’t fall for it. I know it’s all looking surprisingly good and calm right now at Arsenal but don’t let that lull you into letting any kind of hope in. Hope leads to pain, pain leads to anger, and anger leads to ranting mails in the mailbox that you wish you hadn’t sent.

This is still Arsenal. We are still owned by the odious Silent Stan and run by the hapless Ivan Gazidis. Something will go terribly wrong. I guarantee it.

I extinguished all hope since around 2011 and life has been so much easier since then. Admittedly I let a tiny bit of hope in when Welbz scored that last minute winner against Leicester but that was soon eliminated before it even had a chance to take hold.

So please, for your own sake, carry on as you were – watching Arsenal with a mild annoyance and a vague indifference.
Adonis Stevenson, AFC

But the transfer strategy is solid
I read in the mailbox that “Arsenal have been shopping at an old people’s home” and I thought it was a weird comment, given this transfer window has arguably been the most rational in a long time for Arsenal. Sure, two players signed are in their 30’s but the average age of the five signings is 26. This site has already highlighted this practical approach (https://www.football365.com/news/from-chaos-to-clarity-arsenal-crack-the-transfer-puzzle) .

Having broken the club transfer record twice in the last year, both on attackers, the recruitment was never going to be big name/big money transfers. What I hoped for was general strengthening of options in trouble positions (namely keeper, centre back and defensive midfield). What has transpired is basically that, with some additional competition at right back (something sorely missing too).

Lichtsteiner, 34, signed (on free transfer) to provide competition and mentorship for our young promising incumbent who arguably stagnated last season. Has title winning experience, with 7 straight Serie A medals.

Torreira, 22, a young, combative midfielder to add some much needed steel to midfield, filling a long term void in the team and providing alternatives in midfield. Arguably a defensive replacement for Jack Wilshere, who’s departure I was personally disappointed by but made sense given the quality available in the midfield.

Guendouzi, 19, a bright prospect in a troublesome area for the team.

Throw in a new manager for the first time since I can remember and the season holds plenty to get excited about, mainly the uncertainty of it. New faces, new style, can’t wait for the new season.
George (it also signals an end to winter here) AFC, Wellington, NZ

Liverpool should get Hart as backup
Delighted with Liverpool’s transfer dealings this year, shame we (probably) won’t get Fekir, but that’s understandable given the medical issue. There is however the small matter of sub goalie still to sort out. Ward has gone, Mingolet is going, leaving a grumpy Karius as number 2. Would that but good for him, or indeed Liverpool? His confidence is shot and I am not convinced getting barely any game time would help. And when he does play, everyone will be waiting for him to make a mistake and piling the pressure on. Plus he clearly isn’t happy as a number 2. I think he should go out on loan to a less scrutinised league to build himself up.

In the meantime, Liverpool could get an experienced backup, which brings me to Joe Hart. He would cost little / nothing, has been a regular in the Champions League in the past and has tonnes of other big game time in his career. I know he hasn’t had the greatest couple of seasons, but there is still quality there, he would be settled which is what he said he wants, and who wouldn’t want to come to Liverpool and have a juergen hug? Thoughts?

And Virgil was fine, thanks
I think statistics are not reliable when it comes to measuring the sense of calmness and confidence that Van Dijk brought to Liverpool in the second half of last season. I think all Liverpool fans will agree that he has brought a more frequent sense of stability that was sorely lacking. While some fans will debate his impact on Lovren’s form, there may be a correlation between having the right defensive partner and the upshot in his form in the second half of the season. The examples given by Dave are not necessarily a fair reflection on his impact. I think first and foremost he was bought to bring stability during the remainder of the league and Dave acknowledges that his impact was positive in the league. It is this positive impact which made the achievement of champions league football a reality.

One of the points made by Dave is that against better teams in the latter stages of the Champions League, Liverpool’s flaws were exposed. I would argue that goals conceded were a product of individual errors and individual brilliance which do not fully reflect defensive organisation or his impact. Against Roma, I think that Milner’s and Klavan’s handballs were individual errors resulting in penalties , Karius pushing the ball back toe Dzeko was an error, Milner’s face own goal was a bizarre moment of misfortune. The errors in the final are gut wrenchingly clear and Bale conjured a moment of brilliance.

When focusing on the Champions League, Dave does not mention that Liverpool only conceded one goal over 180 minutes against a Man City side that we all would consider a ‘better side’. Admittedly, Van Dijk made an error in the lead up to Jesus’s goal. Despite this, it was no small defensive achievement to be resolute in the face of wave after wave of city attacking play.

Considering Virgil did not have a pre-season with the club and was not fully fit when he arrived, his impact has been worth the money spent if it played any role in securing the additional money earned from fourth place and the ability to sign talent after reaching the Champions League final.
Jamie, Eire

Clubs should appoint more defence coaches
I was interested to see Dave P’s mail in the afternoon mailbox. For a while now I’ve had a theory that clubs would be much better off spending their money hiring the best defensive coaches in the world than splurging tens of millions on players who don’t make much of an improvement to a team’s defence.

Often I have seen defenders look great in a team, then get bought by a bigger club that has a shaky defence and suddenly they become an average at best defender. On the other hand I’ve seen defences look incredibly solid with players who, individually, don’t seem very impressive.

This lead me to the theory that having a very well coached defence with just decent players is better than having an averagely/poorly coached defence with great players. I guess it comes from the fact that a defence relies on a good structure and each player knowing their role and where to position themselves more than it does on individual moments of brilliance that become more important for players further up the pitch.

Obviously the ideal scenario would be to have a great coach working with great players, but with transfer fees at the level they are these days, that’s not so easy to achieve.

I may be completely wrong with all of this, but I always find it strange when a big club is willing to spend huge money on players to fix their poorly organised defence, when they could spend a tiny fraction of that to have a world class coach that could make much more of a difference.
Rory, Cape Town

Sean Dyche just makes players better
Your article on one to leave from each club was interesting but in a way that I was not expecting. In fact most of the selections were obvious until I got to Southampton and Fraser Forster.

He wasn’t great last year and being a Liverpool fan living surrounded by Saints fans I heard quite often the joke of “Liverpool need a keeper don’t they?” which I think was linked to our love of their players but anyway I digress.

My point is this, upon reading that Burnley were interested I immediately thought without any hesitation that Sean Dyche would get him playing well again and get him back fighting for an England squad place. A

At a time when transfer fees are going a bit crazy where so many clubs have the funds to buy success and managers complaining that they don’t have the time or squad numbers needed – is there a greater compliment than that of a manager being well know for getting players to step up and play at their peak? Some better know managers should take note and some loftier chairmen really should give this man a go.
Mike D (we have Alisson now thanks)

Charlie Adam: Big for his boots
Couldn’t the headline for the Charlie Adam quotes on Shaqiri have been, “LFC flop warns top scorer and assist maker for Stoke last season might not be good enough”?

Did Charlie Adam forget what a joke he was at the club. Whether it was his rubbish performances, his red cards or his “injury” mid-season so he could go to Dubai on holiday, he perfectly represented everything that was wrong at Liverpool at the time. He has no idea what it takes to succeed at a big club because he never did.
Minty, LFC

Try not to believe the fake news and misquotes without context that the media attributes to Mourinho. Rather listen to press conferences and listen to what he’s saying fully and in context rather than judging based on selected quotes.

English media wrote many nasty things about fergie when things were difficult. Expect more attacks on Mourinho and get used to it. If Fergie could be attacked, who the heck is Jose?

Jose is not perfect. He may not be loving and jovial to his players and the press like Klopp or Guardiola, but ultimately what matters is the style of play and results. If things are bad when the season starts, then maybe complaints will be justified. Till then, I’m ignoring the media’s bias.
Deji, Halifax, Canada
(MC – It’s weird how media bias only becomes a thing when it’s against your club. Alternatively, people are reporting on the mood and offering their opinion on it).

We totally agree
Was disappointed with the ‘Proper Football Man’ tone of JC STFC’s email, as s/he took issue with Sandeep and his “buzzword bingo”. Even if “vertical pass” isn’t my favourite Americanism, I thought it was a nice analysis of one situation at Arsenal, and enjoyed its reference to slightly more nuanced aspects of the game (and er… most of us refer to Cazorla as ‘Santi’).

Anyway, surely we’d rather have emails like Sandeep’s than the repeated bickering between members of the top six about their managers/spending/players!

Any other mailbox members going to write in to discuss one of the big tactical issues facing their club this season?
Nelson, Arsenal (Still on a high after a great World Cup)