Home Mailbox Mails: England have no choice but to win it now

An excited, nervous mailbox deals with expectations, play-acting, penalties and a goalkeeper's wickets. 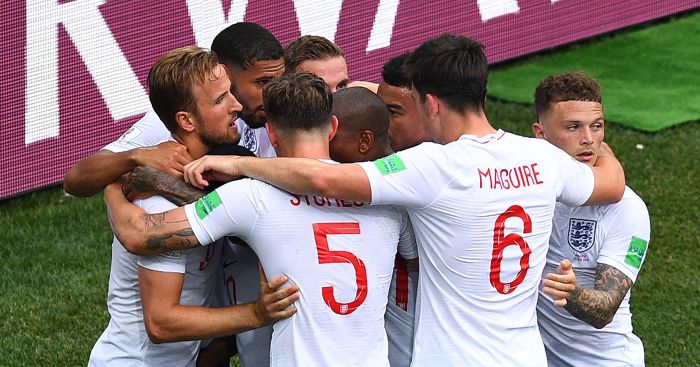 Top of the World
Regardless of what happens with England later, this is the best World Cup I have ever seen! Only one match has been truly bad throughout (France vs Denmark) and we have had massive drama, upsets and some stonking goals. I don’t want it to end!
Ted, Manchester

We have a chance, a very realistic chance, of reaching the quarter finals of the World Cup! That is more than enough reason to get excited.

Days like today are special, they are why we are football fans. Today is about the hope and the fear, the surging belief and the nagging doubts, and it’s about getting carried away on a roller coaster of emotions long before we get anywhere near kick off.

Enjoy the anticipation, enjoy the nerves and, most of all, enjoy the game!

(Almost) No way out
Ah damn, how are England supposed to get out of this then?

Football’s coming home (maybe).
Tom Saints (One nation is guaranteed to have a fairy-tale story and an epic underdog win in the final would confirm this as the greatest World Cup ever)

Solving penalties
In the new age of technology, the penalty shoot-out has changed. Twenty or thirty years ago in international football the players barely knew the opposition never mind where they are likely to place their penalty or where they have scored/missed their last penalties.

In the last few years penalties have become much more of a mind game than ever. In the age of 24hour sports channels, YouTube highlights and social media there is more pressure and focus.

Can you imagine how many views Chris Waddles skied penalty from 1990 would have got, or the pride tingling tweet Stuart Pearce could have sent following his successful penalty in Euro 96.

You then have a lot more mind games, the goal keeper talking to the penalty taker, the opposition players trying to wind up their opponents or placing the ball incorrectly before the penalty and this stuttered run up thing to send the keeper the wrong way. While these have all been around for decades they have become more common.

As the shoot-out has fundamentally changed so should the strategies and tactics to take them. I have an idea here that I am pretty sure will become completely common place in the next decade.

The issues with penalties is that it takes a team game and makes it into an individual duel, penalty taker vs. keeper. All the responsibility and decision-making shifts to the penalty taker and keeper. This flies in the face of the previous 120 minutes of football that was a team game based on tactics and strategies of the coach.

So here’s the idea. You take away the responsibility from the penalty taker. During training seasons every outfield player learns to take 6 different types of penalty, say a penalty to the bottom left (which I will refer to as an A penalty), one to the bottom right (B) one top left (C), on top right (D) a smash down the middle (E) and Panenka style chip (F).

It is then up to the coach to assess which players are good at which penalties (A-F) based on closed training sessions and not based on how they previously scored or missed penalties.

Before the penalty shoot-out the coach can then do one of two things:

Option 1 – Premediated – The coach can decide in advance of the game which types of penalties each player will take. For example: Kane takes an A penalty, Sterling a B penalty, Lingard a D penalty, Alli a D penalty and Young a B penalty.  Before kick off the coach informs which players are taking penalties, in which order and what type of penalty they will take.

Option 2 – Reactive. The second strategy is for the coach to react to the shoot-out and tell the player before he walks up to take the penalty. The coach can then decide if the keeper is always diving earlier hence to go with an E or F type penalty. The coach would also be responsible for deciding who takes the penalties in the first place obviously.

With both strategies the coach instills in the players  the need to ignore everything else that has happened (i.e. who has scored missed what types of penalty, which way the keeper is diving, if they have scored/missed a penalty in a previous game etc.). The coach makes it very clear before, during and after the penalty shoot-out that he is taking responsibility for where the penalties are going, all the player is responsible for is the execution of the penalty. If the coach tells you to take an A penalty and the keeper saves it then it’s the coaches fault not the players.

This then means all the player has to do is practice all 6 types of penalties before the games and be able to successfully execute anyone of the 6 types of penalty in the shoot-out when called upon.

This method takes out all the mind games and decision making that may influence a penalty taker which seems to have a big impact on if the penalty is successful.  I have no proof this would be more successful but to me logically it should.

Sure this may seem unnatural and a left footed player may have a tendency to shoot left, a player that has been successful with one’s down the middle during the game may be more comfortable in taking another one like that, but these types of factors arguably inhibit and complicate the situation more than they help it.

All of the great players have missed penalties hence it has very little to do with skill and technique and as much to do with the situation, pressure and mind games.

A large part of being an international manager is about making big decisions and taking responsibility however when it comes to penalties it seems they get a free pass.

With increased the mental fragility, mind games and the incessant replays now prevalent the above should become common place.
Paul K, London

Red missed
I saw it earlier in the comments section of the Mailbox and after the Croatia v Denmark game I thought I would re-visit it.

In 2010 when Luis Suarez punched the ball off of the goal-line to deny Ghana the winning goal everyone was furious and described him as a villain. The subsequent red card and penalty punishment was not enough to satiate the anger.

Now I’m a Man Utd fan and have no reason at all to defend Suarez but I am left wondering where is all the anger and hate for Mathias Jorgensen?

In case you’re wondering he’s the guy who took out Rebic from behind when he had an open goal to win the game for Croatia. No hope of winning the ball and even if he had it would still be a penalty as it was from behind. Under the new rules he didn’t even get sent off!

I guess my point is that there was absolutely no difference between what Suarez did and what Jorgensen did but one got the wrath of the world poured over him whereas the other not even a mention.
Bradley Kirrage

Skiing toddlers
My current thoughts on the England team (subject to the Colombia result) is that they are like a toddler on a ski field. They are so inexperienced collectively that they haven’t been hurt yet and will continue to fly along as fast as they can until they pick up the scars that ultimately held up the Golden Generation, which ended up about as fresh as Jimi Hendrix’ fingertips.

Go get ‘em you young things. We’re all on your side. The thought of John Terry and others being deified left me pretty cold but I reckon a few Harry Kane statues in 30 years time wouldn’t be shocker should they come good.
John (An English fellow watching this unfold at horrible o’clock in New Zealand)

Roll with it
I propose an algorithm to stop play acting or whatever you’d like to call it when you roll round in the floor trying to get the opposition sent off, or in Suarez’s case, make the ref think you’ve been elbowed in the head rather than lightly touched in the back.

So plan is, for every 10 seconds spent on the floor the player has to spend 1 minute off the pitch, with his team down to 10 men. Plus, additional time for screaming, maybe the VAR guys can measure that and inform the ref. Plus a sliding scale of time linked to the pain you display on your face, like that chart that the hospital has to measure pain 1-10. Plus 10 seconds for every additional roll on the floor the player manufactures.

We can call it medical protocol, like the much more important concussion protocol, but if you’re so badly injured you scream like you’re in labour, lay on the floor demanding the game to be stopped, and require 4 medical professionals, that surely you require more observation than just the 3 seconds after the restart of the game that had to be stopped for you.

My thinking, a really injured player wouldn’t mind, and player who ‘bought’ the foul still gets a foul but he isn’t able to directly benefit from it, and if he has cheated then his team is punished for his stupidity.
Jonathan (does any injured player actually roll around?!)

Just not cricket
Steve, Los Angeles, My favourite bit of American commentary came when watching a premier league match. In what I can assume was an attempt to make the commentary more English ( faux-sophisticated?) the line was: “And he puts it between the wickets”.

The wickets being the goalkeeper’s open legs.
Matt – MUFC