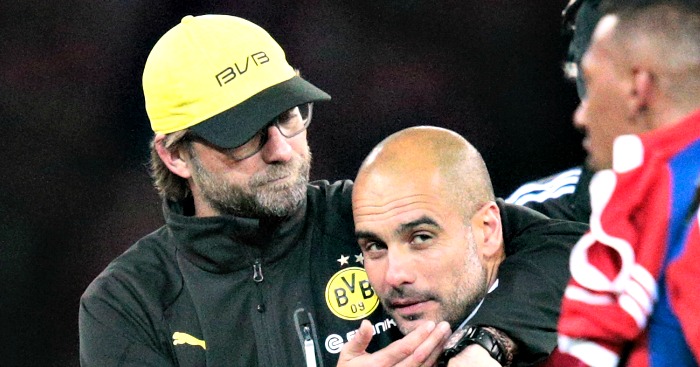 Liverpool confidence
I love me a Jurgen Klopp, and boy has he recreated an effervescent attack force. Just like at Dortmund, many of his attackng stars will probably struggle if sold elsewhere, its a system where there is not a single star but the collective make up the difference.

This liverpool side is probably 6th or 7th best, and by not having a superstar it has allowed the chemistry and trust to form. This is in stark difference to what Mourinho and Pep do. The two rely heavily on special talent as opposed to total team chemistry. It really shows when you start looking at the likes of Kagawa, Gotze, and Sahin. All three looked absolute gems but struggled when the left Westfalenstadion. I see stark similarity with Lallan, Mane, Coutinho, and Firminho, they all look good at Liverpool, but take them out and they will struggle badly.

Whose the best of the lot, Lallana? He doesn’t start at either Chelsea, United, City and Arsenal, but he looks a hell of a player at Liverpool.

Saturdays game will be a mist watch, Klopp had the earlier advantage in Germany before Pep and Bayern stole his best players, I suspect he will have the same advantage and Liverpool will put city to the sword. This time however, it may not be too easy to steal Klopps players, Raheem Sterling aside, Liverpool don’t sell, and if they do, they don’t sell cheap. Its been advertised as Mou vs Pep 2, but Pep vs Klopp 2 maybe the battle to watch.
David

Defensive frailties?
Having a pint on Breck Road following the win over Stoke and decided to read the match report on BBC website.

Is anyone (everyone) else tired of such lazy journalism? Instead of acknowledging Liverpool’s utter dominance and wonderful attacking play the report opened with “mistake by Mignolet” and “Defensive frailties again.”

I am a major critic of Mignolet, personally I think the “defensive frailties” we have had in the last two or three years are due to the fact the centre halves have no faith in the keeper and as a result they intervene where they shouldn’t, causing mayhem in the box.

Looking at the table tonight, Liverpool have conceded less than 14 of their Premier League rivals. That’s not brilliant but it’s not bad. Watching Bt Sport, Skysports or BBC all if the pundits talk about Liverpool being dodgy at the back, it’s a cliché, and something that could be levelled at nearly every team in the division.

Anyone think it’s a c as e of the league is full of some of the world’s best attacking players who would given defender a hard time?

Forgotten the point of this,I’ve been drinking for a few days but journalists – try and find something original. Liverpool fans – we’re not the best but we’re pretty good, enjoy it!
Mark Jones, LFC, Liverpool

Bring back Joe Allen
What does Wijnaldum bring to the team that Joe Allen couldn’t have?

Am not saying Wijnaldum is a bad player, far from it but I don’t see him being £1 better than Joe Allen, let alone £10million.

In fact it seems like Joe Allen has all the characteristics to play the role Klopp is expecting to shoehorn Wijnaldum from an attacking midfielder into.

Liverpool thoughts
I hate using cliches, but it’s a sign of a good team when they win and they’re not at their best.

*Much like the Everton game, Liverpool were pressed by Stoke early on. With Walters and Crouch as your strikers, you know what’s coming. Lovren looked nervy throughout the first half, and oddly so did Clyne.

*I have to take issue with the goal. Firstly Mane was as casual as Nasri’s twitter account in his revelations of his activities in hotels, Clyne should work harder to prevent the cross coming in and Lovren allows Walters to get a run across him for the header. And then Mignolet.

*A goalkeeper is a tough position, but you need to be do the basic things right so you avoid taking grief. Mignolet’s positioning and attempt to save the header were pretty weak. I’ve said it a few times, it’s the difference between title winning teams. Courtois wouldn’t have conceded that goal.

*To be fair to Mignolet, his save from Joe Allen was excellent and luck was on Liverpools side that the ball didn’t fall to Crouch.

*Its hard not to like Crouch. His removal and subsequent sheepish replacement of the corner flag was brilliant.

*The response from Liverpool was good. Lallana and Firmino looked threatening and Henderson started to be a bit more composed on the ball. He’s still trying the Steven Gerrard Hollywood pass a bit too much but his stats are up there with the best in Europe.

*Lallana is the best English player in the Premiership at the moment. He’s been terrific this year and it once more reiterates the Klopp effect.

*Firmino has been off form for the last 5/6 games. Missing Coutinho? Perhaps. Certainly, the recent headlines and subsequent arrest are not needed but he looked back to his best tonight and was rightfully given MOTM. The ball looked like it was going to bounce back out from his shot, the relief of it going in was amplified by the response from Anfield.

*The second half was all Liverpool. The intensity was superb and the passing crisper. It was no surprise to see the third goal go in. It was a well worked goal and a great embodiment of the quick passing and off the ball running that represents Klopp.

*I’ll never understand why a player plays a no look back pass to the keeper. It’s just asking for trouble. Great to see Sturridge finish it so well. The speed of thought is frightening at times and the finish was cool and collected. I still see him playing a dynamic role this season.

*Liverpool outran Stoke by 7km. The fitness is there for all to see.

*They’ve also scored more goals than Barcelona, Real Madrid, Arsenal and Utd to name a few. Terrific to watch but..

*I don’t see Liverpool winning the league, (I hope I’m wrong. I really do) but it was vitally important to win that game. Chelsea look terrifyingly good, Arsenal ground out a result, as did City and Utd are starting to make noise again. Champions League and Top 4 is going to be a close run race and that’s without mentioning Spurs!

*On another note, Big San giving out about Harry the Hornet had me laughing sporadically throughout the day. I’m too easily amused!

The United view
Does any team get so much praise for so little achievement? The media frenzy once again being whipped up to try and will them over the line.

Flags out on Boulevard 96 (or whatever its called) again soon no doubt.
Richard, Manchester.

West Brom and 1-0
And the Arsenal fans are out in force following a hard fought 1-0 against West Brom. In a game we had 26 shots and Foster made 10 saves, a number of them superb stops which made him easy man of the match for me, we are somehow losers for walking away with 3 points.

This is the same team that frustrated free scoring Chelsea to a 1-0 the other week. I would suggest 3 points at home to West Brom is a decent result, especially after 2 awful results from winning positions.

Once you get 1 goal West Brom is easy. Getting the first goal is the hard bit and if you get there late it looks like a poor result.

Let’s take each game in context shall we? Dropping 6 points and then sneaking 3 against Pulisball is fine by me. If that wins gets our confidence back and we go on to win our next 5, I’m a happy man.

We may not be playing great but we are winning. For years we have been frustrated because we play well and don’t win. Now it’s the reverse were frustrated about how we are winning badly. The Emirates is a tough crowd…
Rob A (Great to see Girouds celebration, clearly meant a lot) AFC

How to beat Chelsea
While Conte seems to have built a winning machine on quick transitions, bypassing midfield and flooding numbers in both boxes, there surely has to be some way to stop this team. There are on a whopping 46 points and it looks like the title will be wrapped by April.

Throwing a few ideas out to stop them.

Any ideas folks on how to stop this Chelsea machine with their passionate, loveable manager?
Sudarsan Ravi

It seems to miss the point – Bob Bradley is the US equivalent of Roy Hodgson…a guy who hasn’t really achieved much, managed his national team, but seems to be an ok guy.

His track record or background doesn’t scream US Pochettino or even one of the (many) Watford or Saints guys. If the “back a Brit guys” want to have a go…he’s your man – Giggs should surely have won over him (even with a clearly terrible interview technique).

Claudio Ranieri is proved last year that even a broken clock is right twice a day…but there’s not many of those fairy tales around. Class wins out, and its not a fluke that the current top 6 look like it does.

To be clear…if they want to take “English” jobs, foreign managers should be outstanding, or potentially so. Is Bob Bradley, the best of the US…I’ve no idea, but I suspect not.

In Australia, the national team has a coach called Ange Postecoglou. He was a stand out in the A League (whipping everyone in the league) and is now doing a great job with the Aussie team. Who’s the US equivalent, and why isn’t he front and centre for an EPL gig ?
Matthew (ITFC)

I don’t feel particularly strongly about either team, but I have to say that the Derby County strip features one of the worst shirts I have seen in a long time, and definitely the worst shirts I have seen that don’t feature some type of outlandish colour or pattern. They look like the type of vest over a polo shirt combo that a bunch of sales reps would wear on a company sponsored golf day.

I get the feeling that Steve McLaren had more than a little input on this one.
Yves St Sims
Australia

In 1997 – just five years after football officially began – Peter Schmeichel scored a bicycle kick in stoppage time that would have been outrageous for a centre forward, let alone a cumbersome goalkeeper standing 6″4. Not only was it an exceptional finish, it would have been a crucial one too; United were merely seconds away from crashing out of the FA Cup 4th round, and the goal would have forced a replay. Despite the ABU nature of football at the time, I remember many fans feeling robbed that it was chalked off.

Mkhiki’s finish might have been slightly more acrobatic, but given the unlikely nature of the goalscorer, the incredible striker’s finish and the importance of the goal, I think The Great Dane’s effort takes some beating.
Wubblepig (Enjoy), Melbourne.

Re: Keg Baridi on the best offside goal ever. A good nomination. I’ll throw in Messi’s offside goal (goal not given) against Milan in the CL from a few years ago. The reaction, technique and swaggering indifference is pure class.