Home Chelsea News Mails: It gets worse, Lallana’s back soon… 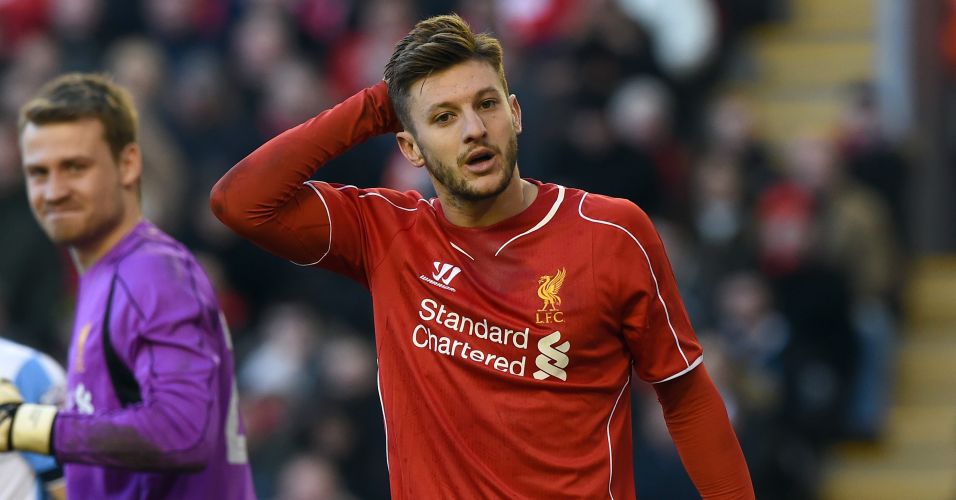 One Liverpool supporter has heard Adam Lallana’s return from injury being presented as good news, and now wants to have a little cry. Plus teams and bans, and alternatives to the word ‘philosophy’…

Jose: Just Doing His Bit
I don’t know why recent mailbox contributors have been having a go at Jose. He’s finally succeeded at what the neutrals have been asking for since last season.

Van Gaal Won’t Be Worried About Nev
I think maybe Perdo has possibly got a bit carried away with the conspiracy theories regarding how much Gary Neville knows about the current in’ and outs of Man United.

Perdo seems to think that Ryan Giggs wouldn’t be capable of keeping secrets from someone he’s pretty close to. Erm…okay.

Also the idea that Gary is grilling Man United players on England duty about his former club and that the players are incapable of refusing to give him info is a bit far-fetched.

In the past there had been complaints from other Premier League clubs about some of Arsenal’s medical team working within the England camp, which lead to them eventually leaving their posts. I’d hazard a guess that since then England coaching staff have been issued guidelines about what they can and can’t discuss with players on international duty, just to placate the clubs.

Nice though your straw man argument was Perdo, I’m doubting that LVG has anything to worry about regarding what ‘Red Nev’ thinks.
Simon, London

I am not against going to old Trafford and being defensive. Rafa used to do it often. But if you are setting up to defend deep and hit on the counter then you have to do two things

a) defend deep
b) hit on the counter

If you can get your team to do these two, then your plan is not going to work out right. So please revise your strategy accordingly. Just wanted to make sure got that.
TAG (still more strikers on the books than goals) LFC

Hating On Lallana
Apart from noting that I’ve now moved from ‘He should probably have the next season’ to ‘Get him out of Melwood, preferably with a cannon’, I don’t have anything new to add regarding Rodgers. I went back and forth on the issue in the summer (buying Firmino made me if not actually happy, then at least excited – shows what I know), but enough is enough.

Things are getting worse this week though – someone noted in the mailbox recently that we don’t have any star players, a situation highlighted by the fact that Henderson is going to be out for a while and that’s now a serious blow rather than an inconvenience. I like Hendo a lot, I really do, but he’s no world beater.

To compound the misery, Lallana is back training, so he’ll be back in the team being totally rubbish again soon as well. Lallana must be the only man associated with Liverpool who’s still 100% behind Rodgers, and it’s because the second Rodgers leaves Lallana’s LFC career is 100% over. He’s crap – he can’t score, he can’t take it past people, he can’t cross, he can’t tackle, whenever he does do anything remotely positive he gets cocky, then takes five extra touches and loses possession, and if you look at him funny his knee falls off. Sturridge’s does too, to be fair, but at least on the rare occasion he is fit he’s a deadly striker.

I’m working under the assumption that Lallana has a video of drunk Brendan wearing a United shirt and crying his love for Ferguson to explain his constant selection when fit. When I see Lallana on the pitch, I imagine what I feel is close to what Chelsea fans feel when Obi Mikel is named in the squad – a mixture of confusion, disappointment and sadness, mixed with an air of resignation that this is happening now and it’s not going to stop.

It shows how far we’ve fallen that Lallana coming back is reported as good news for us. Please, as other mailboxers have said, literally anyone save us.
Matt, (On the positive side: Come on City in Europe!) LFC

Alternatives To ‘Philosophy’
The overuse of the word philosophy in football is annoying. Really bloody annoying. Technically, the use is not incorrect, however, the constant repetition is getting me down.

Philosophy is roughly defined (thanks Google) as ‘the study of the fundamental nature of knowledge, reality, and existence, especially when considered as an academic discipline’ – not football. Philosophy is Philosophy, we have to use the word as that is what it is. Fine. Great.

We can also use the word philosophy to describe ‘a theory or attitude that acts as a guiding principle for behaviour’, potentially within football. ‘Philosophy of Football’ – sounds like a shit degree. Possibly available as a Masters from Stafford once you’ve completed your Bachelors in ‘David Beckham Studies’.

When opting for the second route, we are using ‘philosophy’ optionally to describe the training, tactics and man management of footballers. To prevent bouts of rage from developing at the pretention of it all, then we could substitute it occasionally for other words, thereby preventing what we are collectively writing or saying from becoming a self-perpetuating, monotonous drone.

Yes, Weltanshauung. I couldn’t believe it either. What a word. Fabulous. Much better than ‘philosophy’ e.g.

Van Gaal has upset Di Maria by slapping him around the chops with his Weltanshauung. Rodgers has a much smaller and floppier Weltanshauung than he thought he had.

See. I think we can all move on here much happier and less enranged, with our Weltanshauungs held aloft in victorious salute.
Ben (moment?!? WTF? Don’t even get me started on moment!!!!!), MCFC, Manchester

Teams As Bands
Liverpool – Guns’N’Roses – big in the 80s, shit hair, constantly promised the next big thing, it never arrived
Arsenal – Pink Floyd – at their best they deliver a purity that’s unrivalled, glory days probably behind them
Southampton – Jon Mayall & the Bluesbreakers – a proving ground for exceptional talent before those stars made their names elsewhere
Chelsea – Kanye – talented AF, everyone loves to hate him/them, prone to crazy outbursts
ManYoo – Fleetwood Mac – formerly successful, now dominated by stories of splits in the camp (or is it just Rumours…)
Citeh – Taylor Swift – it’s not cool to admit you admire their work, but actually…
Celtic – Status Quo (obvious reasons)
Rangers – Spinal Tap – comedy gold
Aberdeen (my team) – Nirvana – over all too soon when the difficult visionary departed (for Manchester)
Barcelona – Cream (the band, not the nightclub) – THE supergroup
Bayern Munich – Led Zepplin – all conquering and led by an enigmatic genius, but not universally liked
Dortmund – System of a Down – frontman is an Armenian with an unpronounceable name, loud, good fun
Juve – Madonna – the grand old lady has been around forever and makes the occasional comeback on the big stage, and so do Juve (b*nter!)
PSG – Van Halen – frontman has an ego the size of a planet, great technical ability in the rest of the line-up, not taken too seriously
Fraser (couldn’t think of anything amusing for Spurs, sorry), Edinburgh

100% Wrong On Shaw And Memphis
I can’t be the ony one thinking that Sam is 100% wrong when referring to Luke Shaw’s improvement this season as having a negative influence on Memphis – right?

If anything Shaw’s improvement should be a most helpful development for Memphis to be a more effective player than he has been so far. Firstly, Sam argues that Shaw is bombing into the space that Memphis would like to bomb into, after he’s laid the ball off to a teammate. This is not correct, Memphis Depay is very, very right footed in fact to date I’ve seen no evidence that his left foot serves any greater purpose than standing up on it (much like Tony V when he’s playing). As a result Memphis always, always, always looks to cut inside left to right. With that in mind Shaw’s straight line runs up and down the left flank, should create space for Memphis by pulling one of the right midfielder or right fullback along with him. More than creating greater space, this should prevent teams from doubling up on Memphis. If Memphis was playing with a less attacking fullback, he would be doubled up constantly by right midfielder and fullback. Given his propensity to give the ball away at will (21 times against Liverpool in one half – if I’m not mistaken) you’d have to imagine that he’d constantly find himself crowded and eased off of the ball.

What Luke Shaw offers to Memphis with his inclination to push forward is greater space, looser marking and an option on the overlap, as without Shaw, Memphis would be constantly forced to pass inside as well as run inside into traffic. Further to the point about offering him an out ball to his left, it also allows United to retain their width which Memphis cannot do as he’s not capable of going on the outside often enough given the weakness of his left foot.

So to sum up, Sam you couldn’t be more wrong. So far Memphis hasn’t done anything special in the Premier League, in spite of Luke Shaw’s excellent play, not because of Luke Shaw’s excellence. But given time I think Memphis will be a good player, but he needs to realise that he’s not in the Eredivisie (where the big boys field glorified under 21 teams) anymore, and the players in this league have been around the block far too often to be easily beaten on the inside.
Donough, (I’ve got nothing for these brackets) Dublin

Another Dull Chant
Hope I’m not too late with this but on the topic of clubs with dreadfully dull chants, I have a couple of examples of my own to relate. The first is from a few years back when I dragged a bunch of Prem team supporting mates along to Scarborough to watch my lot (Exeter) away (I was living in Yorkshire at the time), to hear the chant at the final whistle of “We – Are – Ex-et-er say we are Exeter”. This was made worse by my mates insisting that we were chanting “We – Are – Playoff – Spot” and telling me that beating Scarborough 3-2 to go 7th in the conference table really isn’t worthy of its own chant.

More recently I took my wife along to a couple of Exeter matches and she was keen to be able to join in with some of the chants. That is until she heard them start up our most popular chant of “Cider, Cider, Cider” on repeat. Followed by the chant that I’m sure encourages the team more than any other, the old Vera Lynn classic reworked into “We’ll score again, don’t know where, don’t know when” – with good historical reason tied back to the club almost going bust before being rescued by a fan-driven Supporters Trust buyout, but still catchy and motivational it is not.

We used to be so promising as well, back in the days when we had players like “Sean Devine Devine, he wears number 10 not 9, and scores all the f**king time” (he didn’t, but it was a great chant.)

Hat-Tricks
A good list of hat-tricks but how you can leave out Gary Rowell scoring 3 for Sunderland against Newcastle at St James Park in 1979 is beyond me. Rivaldo himself would tell you Gary deserves to be above him in the list.
Ian

Mediawatch: 90s Music References Since Forever
Following on from a recent mediawatch reader who impressively spotted a classic JoJo song title, I am pleased with myself for noticing the reference to Usher (I think) and Oasis in today’s edition
Michael, MUFC