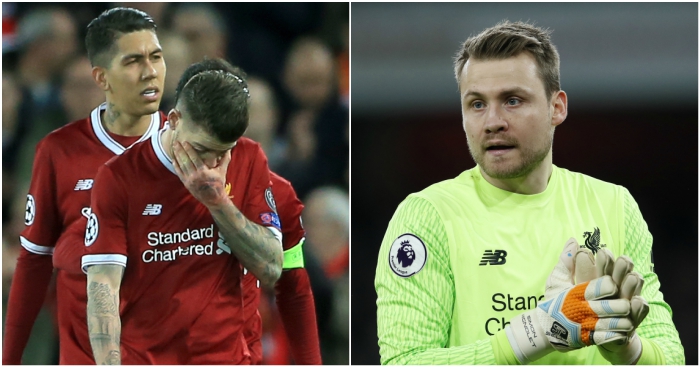 Keep the emails coming to theeditor@football365.com…

Moreno and Mignolet: We’ve had enough
Oh if ever a nail was needed in the collective Mignolet/Moreno coffin this was the night for it.

The thing about Moreno is that he’s basically not a good defender, on average, but he’s also not providing loads of goals and assists. He’s also not an intelligent footballer so that means he’s just a short guy who runs fast. Mignolet wouldn’t get signed by any other team in the premiership. He’s not good enough for the league, let alone the top 6.

TAA had a dreadful night; every ball was floated and useless, too many had too little thought behind them. I’ve wondered why he wasn’t getting any games versus Gomez but today told the story of why.

Emre Can had another pretty lamentable performance. I can’t believe that the Man City interest is anything more than his agent trying to get someone to pay him a salary he’s not worth. If he went to Man City he wouldn’t get near their second XI, let alone starting games.

Danny Ings came on and was much brighter than his last sub appearance. He genuinely influenced the game with his presence which is more than can be said for most of the players who turned up tonight.

The thing about the FA Cup is that it’s a great tournament to try and win because it’s only 5 extra games to make the final so the fatigue issue won’t be too bad and for the players to have something to care about in May is a good thing; winning any trophy can help foster a mentality to win more trophies in the future.

The other side of the argument is that the fight for the top 4 is so intense that fewer games is better. That all said, on balance id rather have won this game. We have now lost two in a row. It’s worse because it’s the teams in 20th and 19th in the league.

The pressure on the team for Huddersfield could actual stifle their performance and if it’s three bad results in a row going into the Spurs game then nobody needs the crisis (CRISIS!) talk in the media leading up to the game.
Minty, LFC

…A few thoughts on that inspiring display.

– He somehow wasn’t at fault for any goal we conceded but Mignolet showed yet again what an embarrassment he is. Karius must be by a distance the worst starting GK in the premier league, but Mignolet is a different level of pathetic. I just don’t understand him.

– TAA gets a pass on account of his youth, but he absolutely sh1t the bed in the second half. He should’ve been hooked as part of the triple sub. On the other side Moreno was back to his familiar worst, offering little in attack and less in defence. Van Dijk did little wrong but looked like he was defending on his own rather than part of a unit. Matip offered absolutely nothing, he looks bereft of confidence. He’s not staking any sort of claim to be VVD’s first choice partner.

– After a couple of good games, Can is again showing the sort of form that breeds ambivalence towards his inevitable exit. He was shocking. Wijnaldum and AOC tried gamely but were ineffective; as Daniel Storey recently wrote, they are ideal for a high-tempo low-possession game against the likes of Man City, but ask them to dictate the play against a team sitting deep and they come up short. Really hope we can get Lallana back in soon. Henderson and Milner couldn’t have been any worse, but still gave it their best shot.

– Mane, Salah and Firmino just didn’t have the craft to get through a limited and patched-up WBA defence, and contrived to waste the few chances we did get. The whole attacking unit is really struggling with packed defences. Ings, damned with the faintest of praise, looked alright when he came on so he gets Liverpool’s motm.

– I’m sure the loss of Coutinho will be brought up but we played WBA recently with him in the side and couldn’t break them down then either. The sort of player we desperately need is a blunt instrument, a bully, someone who’ll get in the box and just force the issue. Dare I say, a Lukaku.

– That said, with Coutinho gone our bench is horrendously uninspiring. We have no one who can replace what he brought to the team (particularly with Lallana missing again). Ings needs time, Solanke is one for the future and Sturridge is finished. We desperately need another attacker in January to get anything at all out of this season. Bringing on *both* Henderson and Milner when desperately chasing a game is a savage indictment of the quality we have in reserve at the moment.

– Is there anyone in the world not named James Milner or Trent Alexander-Arnold who thinks that the best way to unsettle this WBA team is to repeatedly float gentle crosses into their 6 yard box? F*cking hell that was infuriating.

– West Brom really didn’t have to do much other than let us shoot ourselves in the foot, but they defended stoutly, took their chances whem they came, and coped well despite losing two to injury in the first half, so credit to them for that.

– And finally a note on the VAR. It dragged on once or twice but ultimately came to the right decision every time. I’ll take that, even though we managed to do f*ck all with the help it gave us. “Oooh, but it’ll stifle debate” – like anyone watching that has nothing to talk about afterwards.
JG LFC (seriously, can we just banish Mignolet already)

A bad night for VAR
I’m a fan of the introduction of VAR, or at least, I thought I was. However, if it is going to be used by Craig Pawson every week, for every decision, then I hope it dies a death. I’m not even that convinced that the penalty was a penalty… Yes there was a hand on Salah’s shoulder, but was it enough to spin him to the ground? Coupled with the fact that the referee didn’t seem interested until Salah asked for the VAR, it just doesn’t feel right.

The time it takes is daft. Maybe the answer is to remove it from the referee. If the ref thinks there may be an issue, then he refers it to the VAR. The Video Ref then makes the decision. No need for the on field ref to be staring at a screen in a tunnel, after he has asked for the review, taken time to find the screen. The video ref will be constantly reviewing each decision, so as soon as the on field ref asks the question, he can be ready (or already in the middle of) to make a call.

I get it, it’s early days, and needs serious tweaking, but what’s the point in watching football if you’re not going to mercilessly dissect everything?
Liam, Bluenose in Cornwall

…That was just surreal.

Not the defending, which was terrible. Which is pretty standard. Or losing, deservedly, to a lower ranked team. That’s not exactly a surprise either.

But it seemed like the referee was single-handedly trying to make sure VAR was abolished. Every goal, tackle, offside – you just waited for VAR to kick in, went and made a brew (slowly) and then came back to be frequently surprised by the outcome.

I saw the ref looking at the Salah penalty and thought from the angles we saw that it looked like a bloody soft dive. Seemed like he was going to send him off in a repeat of *that* Chelsea game. So he gave a penalty instead. Bizarre.

There was almost a look of total panic in the refs eyes and chances are he’ll be slaughtered today. His use of the video ref was awful, it wrecked the tempo completely and will probably detract from a pretty damn good West Brom performance.

And the worst thing? It made me *agree* with Pardew after the game. Now that’s sickening.
James, Liverpool

Oh good, Man United fans baiting Liverpool about Van Dijk
The argument last season was that an £89m midfielder was supposed to get you 20-25 goals a season and win you every game (whether or not he mostly played as a DM and regardless of how shite the others around him were).

Fast forward to 2018 and I’m wondering what’s a £75m defender supposed to get you if not clean sheets, classy and superb tackles, and 94th-minute equalisers?

Oh and ensuring a win against a Pardew-managed West Bromwich Albion!
Jerry, MUFC

And some Liverpool questions
Some questions for Liverpool fans back from the pub:

– For all the Liverpool fans defending the ridiculous fee paid for Van Djik with the “At least Klopp knows who he wants and will not settle for anyone who won’t improve the side”, does it really matter when Klopp cannot coach the team to defend effectively?

– Is such abysmal defending from Virgil “Cannavaro” Van Djik acceptable as part of a bedding in period when he cost a world record fee and does not offer an instant improvement to defending?

– After the match, Klopp said Liverpool showed great character in the second half. Is this “character” somehow different and better than Brendan’s character?

– Does it matter if Can is being professional about running his contract down if he turns in performances like that?

– Does it matter who is at RB when both Gomez’s and Alexander-Arnold’s first priority is to attack and not to defend?

– Is selling Coutinho still the right choice when there is no on the team who can provide the bullets for the deadly front 3, other than Lallana?

– Is Wenger still to blame for the Ox’s inability to track a runner behind him?

– Can you realistically see the defending improving unless Klopp stops being stubborn? Or have you already resigned yourself to another 4-1 pasting you will get when you meet Pardiola on April 21st (no VAR in the league).

Imagine spending £115M on the OX and Van Djik and having a go at other teams for causing inflation.
Falooda in NY

A bonus points system that is hard to understand with a headache
All the talk on awarding points on bonus points, but I don’t think I’ve seen anybody mention rugby union’s system.

It wouldn’t overly award teams for tanking whoever is this seasons’s Derby County and make six-pointers pointless, but it gives both teams an incentive to fight on. It would also mean the end of grinding out 1-0 wins against poorer opposition because the teams around you are trying to score 3 in those games.
Matt ( another thing football must invent from scratch without learning from other sports) MUFC

Actual quote from Bilbao boss: “He has not told me he is going to City”.

If you’re gonna call others on it, you might not wanna do it yourselves.
Pete, Swansea