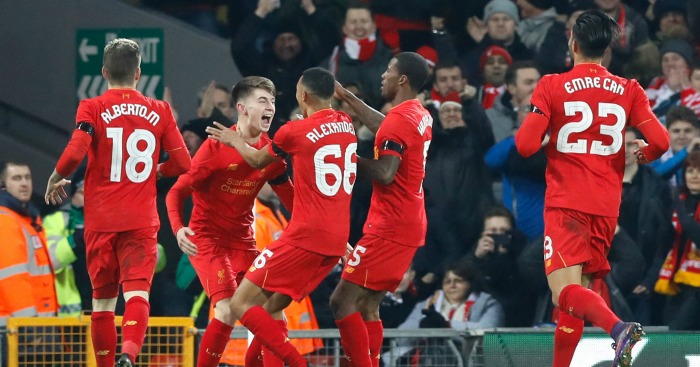 Keep your thoughts coming in (please) to theeditor@football365.com. We will have 16 Conclusions for you this evening on the League Cup quarter-finals…

Loving Liverpool’s new breed
No Lallana, no Coutinho, no Firmino, no Lovren, no Matip, no Sturridge, no Clyne, no Milner (ish), no Henderson, no Karius. No matter.

Loving the new breed, and they’ll do well because it seems Klopp loves them too.

Flip, is Lallana first name on the team sheet? Irrespective we are going to see what we’re made of in the next few weeks given injuries to key personnel.
Barry, Cape Town

“Just look at his face!”
What I loved about Woodburn’s goal was how hard he hit it. It was basically how I think I would shoot from 2 yards out if someone planted 17 year old me in front of the kop. Delightful to see young guys like him and Winks getting a chance and absolutely lapping it up.
Minty, LFC

How proud must Woodburn’s parents be?
I’m the proud father of a son, Peter, who’s 17 years and 128 days old. He’s on his high school’s rowing team, doing well and finishing top-3 in a couple of races, or regattas, last season. I am very proud of Peter and his achievements.

Which brings me on to Mr. and Mrs. Woodburn – I mean, holy crap. If I was Mr. Woodburn, I would, without a doubt, have kneecapped myself jumping out of my seat/the sofa (One has to assume that he was at the game?) and then I would have ruptured both my tear canals irreparably. Like watching Rooney, Milner, etc. scoring goals at a very young age, this, more than anything, is what makes me love football. Ten million boys fantasize about it – Ben Woodburn just did it today!
Tom K

And Klopp has improved the defence
To all those doubters: Not the first time I will say this, but now the fifth best defense in the league while still being top scorers. I note Karius has not even been mentioned over the last couple of weeks. Liverpool will finish top two because of their defence not in spite of it.
DL ‘clean sheet ‘ Geneva

Another calm United fan
This time last year we were second on the log behind eventual fairytale winners, Leicester City, while playing the worst brand of football I’ve seen from a United team (I’m only 26, though). Moyes’ team was dire but at least they looked like they were trying to score, albeit futilely and predominantly through crosses to Fellaini. Last season under LVG we sideways-passed our way to an FA Cup and 5th place, losing out on 4th to City on goal difference, and most of us gawked at how we’d managed to play so badly while continuing to pick up three points. This season its pretty much the opposite. United are really playing some great football, creating chances galore and the performances have warranted more points, at least 6-9 more. Were it not for poor finishing Pogba’s first assist in the league would have come much, much sooner than Sunday v West Ham.

Its weird then how a guy whose musings I usually agree with, in Peter G, can possibly reckon he doubts Mourinho will be any kind of success at Man United. I’m no fan of Jose as a person, but I am able (unlike some) to separate his personality and his coaching ability. His record speaks for itself and I will not hark on about that. Jose has had 1 horror season in which we all agreed that the players seemed to down tools. Even Klopp had one such failed season at Dortmund not too long ago with Dortmund near the foot of the table halfway through the season. The caveat is that Bayern poached their top players but, even with that in mind. that season was startlingly bad from Klopp.

Barely a third of his first Man United season has passed and yet the football psychics are already foreseeing that Jose’s time as a great manager is over? After 1 and a third seasons? You guys are exhibiting the same kind of kneejerkism (not a real word) you accuse managers who discard talented, but underperforming players who then go elsewhere and succeed, of exhibiting. Lest we forget, the last time he won “the most difficult league in the world” was less than two years ago, Its a crazy world we live in when one can turn from a great to a sh*t coach in less than 20 months…

Mou’s start hasn’t been good in terms of results, but in terms of performances he is way ahead of both Moyes and LVG. Those comparing his record to that of his predecessors and using that as a finite barometer for his competence would be well advised to take a look at Klopp’s record 6 months after he had been appointed compared to Rodgers 6 months before he got fired. Mourinho has had even less than that 6 months.

This promises to be a cracker of a title race. Let the team that is ready and  deserving to win it do so, my team is not quite there yet and I am just fine with that!
Buchule, East London, RSA (The Grand Tour > Top Gear)

But could this be an incredible folly?
Ted from Manchester makes the very reasonable point that Man United are playing pretty well at the moment and that with time, more clinical finishing, a pinch of luck and an opposition keeper with a tapeworm and things will surely change. Fair enough.

But, is it time to start calling out the Manchester project for what it really is and what it may yet become? We are witnessing conceivably the greatest football folly of all time. We are seeing the most expensively assembled squad of all time. More than Real at their most extravagant, Manchester City gushing out money like an open oil well or Barca flinging millions at their latest fancy.

Manchester United’s spending to date on this squad leaves them for dead. So far they are managing to be a competitive top six premier league side. This is insane failure on an epic scale.

And that’s just the best-case scenario, that somehow spending massive amounts of money translates into success. What if the only players who decide to come are money hungry mercenaries with no purpose, desire or hunger beyond their own bank account? What if it doesn’t get better?

If I was a Manu fan I’d be worried, this could all go to sh*t very easily. Trust me I’m a Liverpool fan, I’ve seen it.
Dave

This…
I am very much shaken by the awful plane crash in Colombia. It is a truly heartbreaking story, one which is actually difficult to process in your own head.

My thoughts and prayers are with the families and friends of the victims first and foremost. But as this is a football fans website, I must say my heart goes out to the fans of Chapecoense. Just imagine what it would be like to see so many of the players who you cheer on, idolise and bring moments of joy to your life be taken away so suddenly.

Being a football fan isn’t just about hoping one team beats another. It’s about being part of a community, an identity, a religion of sorts. So many members of a team losing their lives is a disaster for this community, a real tragedy. Chapecoense are one of world football’s recent extraordinary stories, they have no doubt made their fans proud over the last few years. I am sure these players will be remembered fondly forever. But I hope that the people and the fans involved in the club have the strength to rebuild this incredible club.
Damo,Dublin

A nice idea
I had a thought about a fitting tribute to those who passed away. Now obviously, my thoughts are inconsequential, but in light of all the goodwill going the clubs way, I just wanted to outline what I think would make a marvellous tribute.

Don’t cancel the final – postpone it for 10 days. Allow Chapecoense to assemble ( on loan / short term contracts ) a team of Brazilian greats and let them play the final in tribute to the people who lost their lives.

Kaka, Ronaldinho, Ronaldo, Rivaldo, Roberto Carlos, Cafu, Romario, Gilberto Silva, Dunga, Neymar, Julio Cesar – even  Pele, Zico and the like could trot out onto the field and represent the club.  Perhaps even spread the net further and field a World 11.

It might reduce the final to a Testimonial, but what a way for the football community to come together  to honour those that passed.
Doug, AFC, Belfast

Lookalike
Garry Monk is quite good. I liked him at Swansea and Leeds seem to be playing well under him but he definitely peaked in Homeland season 2.
TGM

The Mailbox really is full of lovely people. This was one of many
Paul (the Geordie Liverpool fan), stay strong in this difficult period. Thoughts are with you and your family. May your father RIP.
Naz, Gooner