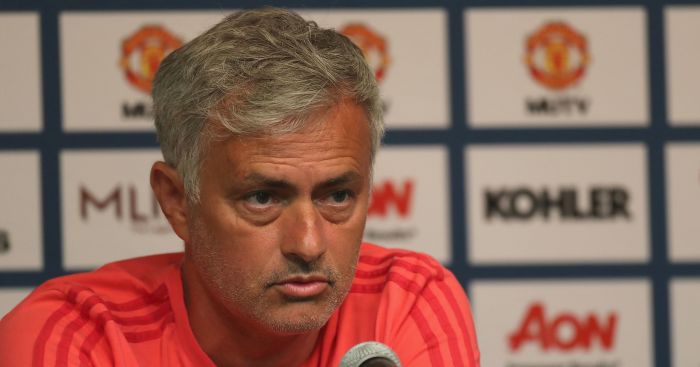 You know what to do – mail us at theeditor@football365.com

Mourinho’s passion is drying up
In my opinion, Mourinho should stay at United for this season and then leave if we’re still trophyless at the end, as he doesn’t seem to have the drive anymore. Changing now would be pointless and unsettling at the club, too many managers in too short a time leads to short-term thinking by all and a regularly huge expenditure to accommodate the wishes of a new manager. Pretty much what Chelsea are doing right now.

Until recently I was a line manager at my work and I don’t like it, you’re trying to get a team of people motivated, trained to a competent level and performing as a unit. In Premier League football you can’t use money to motivate, the squad are all millionaires, they already think they’re pretty damn good, so there’s really only the ‘play or don’t play’ angle and then the sulky ones get sulkier, the good ones just carry on. Sometimes you get lucky and find the grounded ones but I reckon it’s a right ball ache. Add to that the fact that every man and his dog reckons they could do better than you and it’s a pretty thankless task, other than glory if you do get it right and a pretty big pay cheque.

The issue as a manager comes when you have under-performing members in your team, some react to the carrot, some to the stick and the skill comes in realising which is which. I am pretty crap at it but this is where Mourinho seems to have taken a massive step backwards. In his first stint at Chelsea he deliberately made an arse of himself, saying narcissistic things on camera to deflect the stick from his players, now he actively throws players under the bus. That is a reflection of his passion drying up, he has no patience with players who are underperforming for one reason or another, ‘they should be good dammit, we paid £Xm for them so why aren’t they?’ Instead of putting an arm round their shoulders and identifying the reasons why Martial, for example, hasn’t repeated his first season, Mourinho would far rather buy a replacement. This is likely to be at odds with the board and Woodward because it is a) expensive, b) de-stabilising and c) if the new player has similar problems you just repeat the whole saga. Mourinho has lost it, in my opinion, if we don’t see any improvement in Shaw, Martial, Rashford or even Pogba this year then Mourinho should retire.

This year we are being mocked for stating that all we want is progress and next year isn’t going to be our year necessarily.

Are we finally turning a corner at the club I have supported for the last 30 years?

In the spirit of all things Liverpool and the unpredictable game we live and love next year definitely without a doubt won’t be our year.

Retaining the Premier League…
I’ve just read the Mailbox where Nick, a Man City fan states that he isn’t “sure if anyone is grasping how good City are”. I’ll start by saying City were phenomenal last season, no doubt about that. They played some incredible football and blew most teams out of the water. They were deserving winners.

However, in response, I don’t think that Nick understands how difficult it is to retain the Premier League. It has been retained on 7 occasions and by only two teams (United and Chelsea). Winning the title is hard, retaining it is 10 times harder.

Additionally, the formula to beat City is there and I don’t believe it’s what Nick believes it is which is to “attack [them]”. For most teams it is to defend well and break quickly with a genuine threat in behind. Last season, Crystal Palace highlighted this brilliantly by getting numbers back and hitting Zaha in behind. They only failed to win because of a last minute penalty.

I also believe that last season City were shown a bit too much respect, particularly in the first half of the season. Teams got 11 men behind the ball and didn’t look to break or had no plan to attack them. If you look at any of the games City struggled in or lost, most of those teams played like Palace did.

Finally, being Champions brings with it additional pressure. Teams will be more motivated to beat the Champions and will thus play to a higher level, something United have had to cope with for 20+ years because we’re United. While I still make City favourites for the title, there is no doubt United, Liverpool, Spurs et. al will be well up for the challenge of dethroning City.
Ryan, Monaghan, Ireland, MUFC

It’s hard to take Nick seriously! Even with all the money in the world and arguably the best manager we are ultimately still City and capable of shooting ourselves in the foot given the opportunity. That’s why I love this club. It’s because of this that it’s pure folly to make predictions at this stage.

On the subject of Liverpool I’d argue they bested us on 3 occasions last year and probably shaded the first half before Mane’s dismissal in September.

I am however very hopeful that City can retain the league and challenge in Europe but equally a relegation fight and CL group exit may await. Never change City!!
Banjo (exiled in Prague)

Childbirth, miracle innit
I can’t claim poverty, I do alright but I live month to month.  If I don’t work this month my kids don’t eat next month, simple.  Despite that if any employer told me I had to miss the birth of my child I’d tell them to do one and laugh my way out of the building.  Anthony Martial has already made enough money to never work again, I can’t imagine how little of a f**k he gives about Jose Mourinho right now.  Do us all a favour Anthony, go back into training next week and kick Jose square in the nuts.  You’re never getting back in his good books anyway and it’s probably your best chance of getting sold.
Matt, AFC

The United brand means something to people like me
he saga continues. I have been a United fan since 1965. I met George Best as a kid when my old man was making ads for Cookstown Sausages. I was in the Player’s Lounge in 1971 after they beat Spurs 3-1, a Dennis Law overhead and Sammy McIlroy’s debut. I went through the 25 years of Liverpool domination, then the glory years when I could just smile at the Souse supporters on a Monday morning in the office, to provoke them to tell me to go forth and multiply.
But enough. We haven’t even started the season and that clown is making me feel, well, slightly scummy. His arrogance, self-indulgence, negativity, me me me attitude just makes my skin crawl.
He doesn’t need one more player. That team is packed with potential, he just can’t manage them. His smart chat is not smart, it is just arrogance.
The United brand means something to people like me. Young players developed not slagged off, a verve in the way we play, even if we lose, a recognition that although a big club, there is history and values in there somewhere.
I don’t want to win the League. I want to watch a team that plays good football. I want to be thrilled by players taking risks. I want to see some smiles on the players’ faces.
I know he won’t go yet, but I wish he would just, essentially feck away off.
Tim McKane

Tottenham’s frustrating pre-season
There is a curious mixture of confidence, worry and an increasingly disconsolate mood among the Spurs supporters I talk to, or the forum I peek at.

The first that as to be said is that nobody knows what is happening other than those on the inside, therefore it’s all speculation. An example being that it’s Levy who’s the problem “typical Levy” being a common refrain. What if it’s Pochettino who is the issue? Maybe he only wants the likes of Martial, Kovacic and De Ligt (to pluck three of the names I have seen linked more than once). Perhaps the players we did want have suddenly gone from being £40m to £70m because teams like Everton and West Ham have their pants pulled down so often that the rest of the clubs get screwed too?

There isn’t a Spurs fan I know who doesn’t want additions but they only want, which makes perfect sense, the right ones. N’kooudou, Janssen, Sissoko and Llorente to name four but add in Njie, Stambouli, Fazio and Wimmer make it eight, who have been bought and brought nothing the club at all.

And then there’s the outgoings; this has a significant affect, to deny that is negligent. Why should we let Alderweireld leave for £35m when he has two years on his contract, even if next year a clause is activated? Why can’t we demand more for Rose (a player who is so far from his former glories as to be more like his former, former self)? If Dembele leaves, does Winks step up despite a year of injury problems? Or is young Skipp going to be our next Kane, Winks, Dele?

In short, it’s frustrating…whether it’s due to a stadium being built, no naming rights assigned, a manager with only specific individuals in mind, or an owner who won’t wilt because others have, but it’s nothing new.
Dan Mallerman

Man United players are human…
Dan is wondering why the likes of Pogba, Lukaku, Rashford & Lingard are taking holidays after the World Cup instead of training to be ready for the start of the season. (Is he under the assumption that they can’t train abroad?)

Maybe because they’ve been training every week since this time last year, with no considerable breaks &  each player playing at least 40 competitive games for club and country.  I’d take a rested, recovered & refreshed quartet over them playing 3 or 4 useless friendlies at half place with all the travel & stress that comes with a pre-season tour.  Remember, these tours are mainly used by the owners of the clubs to generate additional revenue, they aren’t vital to the clubs success.

Oh, and they’re human, don’t forget that they are entitled to have a good time, just as much as you and me.
Jack (Football is part of life, not life itself) Belfast

God bring back meaningful football
This really is silly season isn’t it.

Fans of rival clubs analyzing each other/boring each other to death with opinion and counter opinion. Rival managers commenting/not commenting on other clubs players.

Oh no wait, this is the same as during the season with the added tedium of friendlies.

God bring back meaningful football. Even some cricket would suffice. But somehow the broadcasters have managed to push that back 3 weeks after the WC has finished. This really is a sickening come down after one of the best world cups in recent history.

Yours miserably,
Gary, Bristol. (If I could turn back time, if I could find a way)